What’s the best hemostatic gauze? Well, the short answer is, “It depends.”

Yeah, I know, kind of a cop-out answer. But it’s the truth. Let me explain what “hemostatic gauze” is and why you should care about it. To do this, we’ll need to go back in history a bit, and explain some basic emergency medicine.

First, though, you probably want to know who I am. As a firefighter and the lead medic for my SWAT team, I not only have experience teaching about and using hemostatic agents, but have also been the point man when choosing the hemostatic agent for my team, and as such I have (quite literally) done my research. 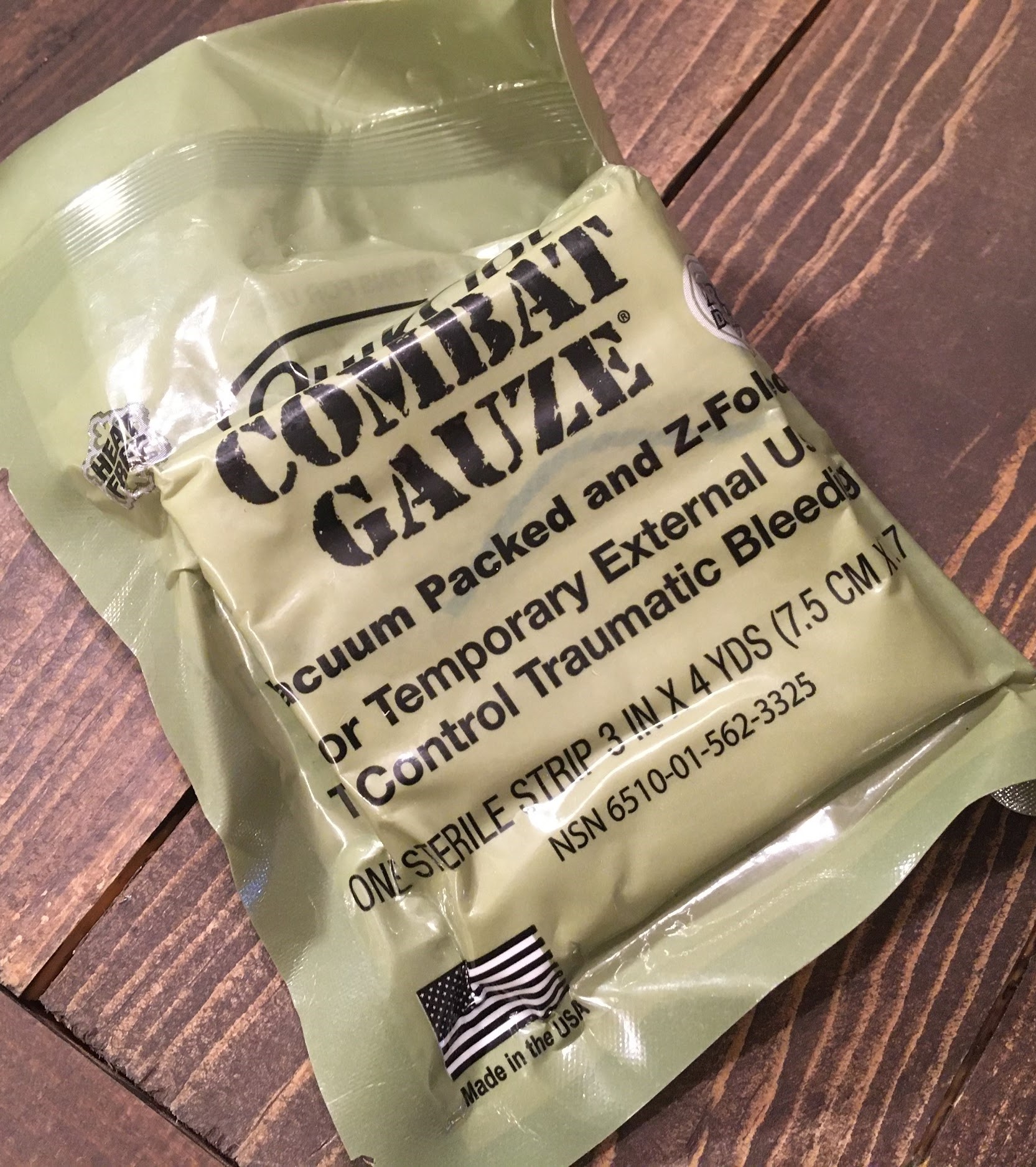 If someone is bleeding, we need to stop it. That’s the first step of the military/tactical “M.A.R.C.H.” sequence:

To help us break this first step down, we’ll look to the folks at Dark Angel Medical, who put together this lovely graphic: 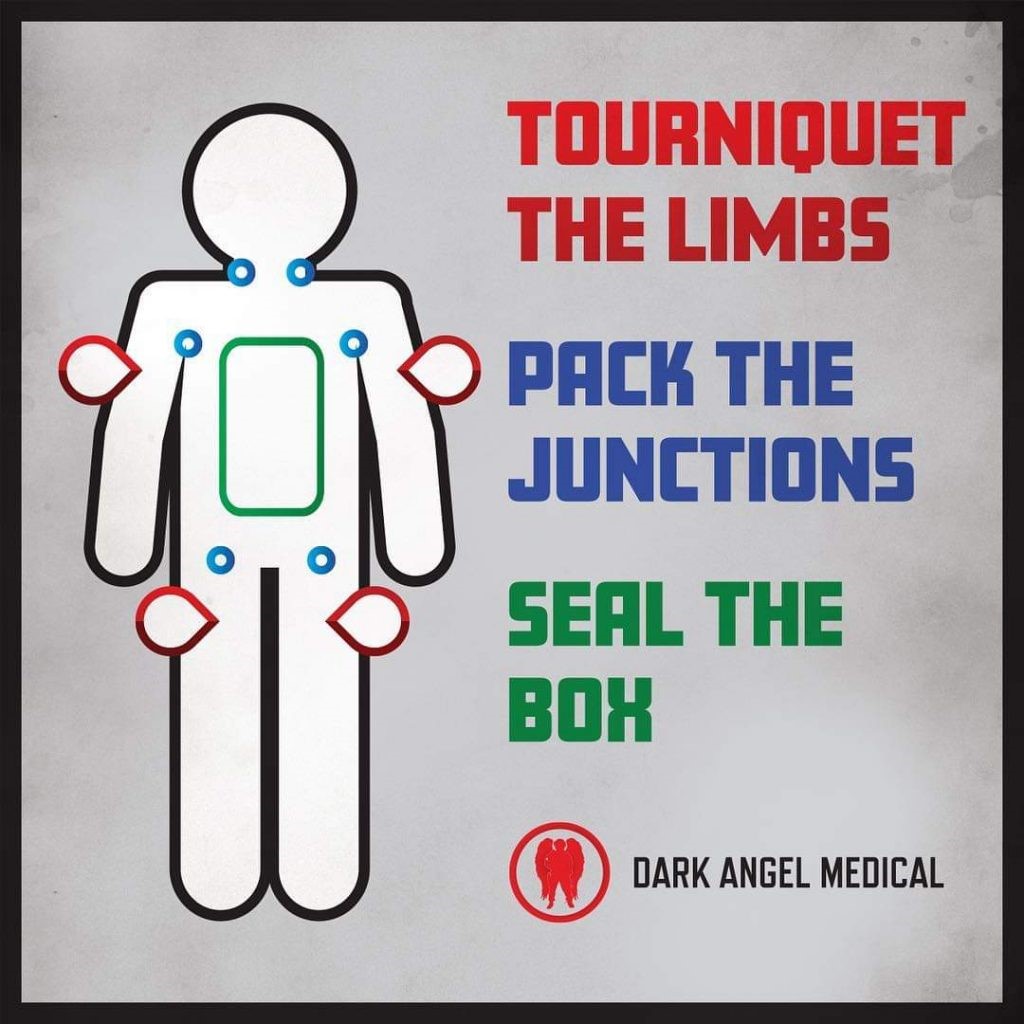 Tourniquets are fairly self-explanatory, and chest seals we can get into in another discussion, but packing the junctions is where hemostatic gauze comes into play. It serves as an adjunct to wound packing, decreasing the time it takes the body to clot off the injury. This CoTCCC Committee-on-TCCC video shows how to pack a wound with hemostatic gauze.

Also worth a mention is the fact that in the past, people used powders to provide hemostasis in field conditions, but these are now largely regarded as a Bad Choice. They require manual debridement in the surgical suite (i.e., scrubbing…inside the wound…), fly everywhere in the wind (clotting powder in the eyes sucks), and generally don’t go where you want them to and make a mess. Impregnated gauzes are the gold standard for field hemostatic agents, and have been for a few years.

There are two major manufacturers of hemostatic agents, and if you’ve done any research into hemostatics, you’ve probably heard of them: QuikClot and Celox. I’m going to talk about both, but please note this is not an exhaustive discussion.

I will explain the current technologies and their merits and drawbacks, but you may recall that some earlier hemostatic agents (including early zeolite-based QuikClot) caused thermogenesis (heat) when applied to blood and caused massive issues with burns and pain. Current products on the market do not, by and large, suffer from these drawbacks.

The big advancement in wound packing and hemostatic agents (at least in the emergency/tactical context) came in 2008, when Z-Medica, the maker of QuikClot, integrated a hemostatic agent into gauze. All the current well-regarded products on the market follow this general model.

Celox uses Chitosan (or Chito-R in the case of their “Rapid” product). Chitosan is derived from shrimp, and interestingly enough has no issues in populations allergic to shellfish. Celox is the standard hemostatic agent supplied to the U.K. military, among others.

QuikClot, on the other hand, uses a kaolinite (a type of clay) derived material, and is the standard issue hemostatic agent supplied to all branches of the U.S. military, which could be an endorsement or a point of concern, depending on whom you ask.

As far as advertisement goes, Celox-R is advertised as being capable of stopping a bleed with as little as 60 seconds of compression, a massive advantage in any kind of emergency situation where time is critical.

The other big piece of information in favor of Celox is its re-bleed data after patient movement, something that can be extremely important in an EMS or tactical situation. Apparently “Hoggarth A, Hardy C, Eason G, Lyon A, Marsden C.” published a presentation on this topic in 2011 at ATACCC. I have been unable to find their original presentation, but the data they published indicated that:

“[Porcine] femoral artery injury models were treated [with hemostatic gauze] and then the models were driven over rough ground for approximately five minutes to simulate a casualty movement, before being examined for evidence of re-bleeding.” In this test, 60% of the QuikClot models developed some kind of re-bleed, but none of the Celox Rapid models did. 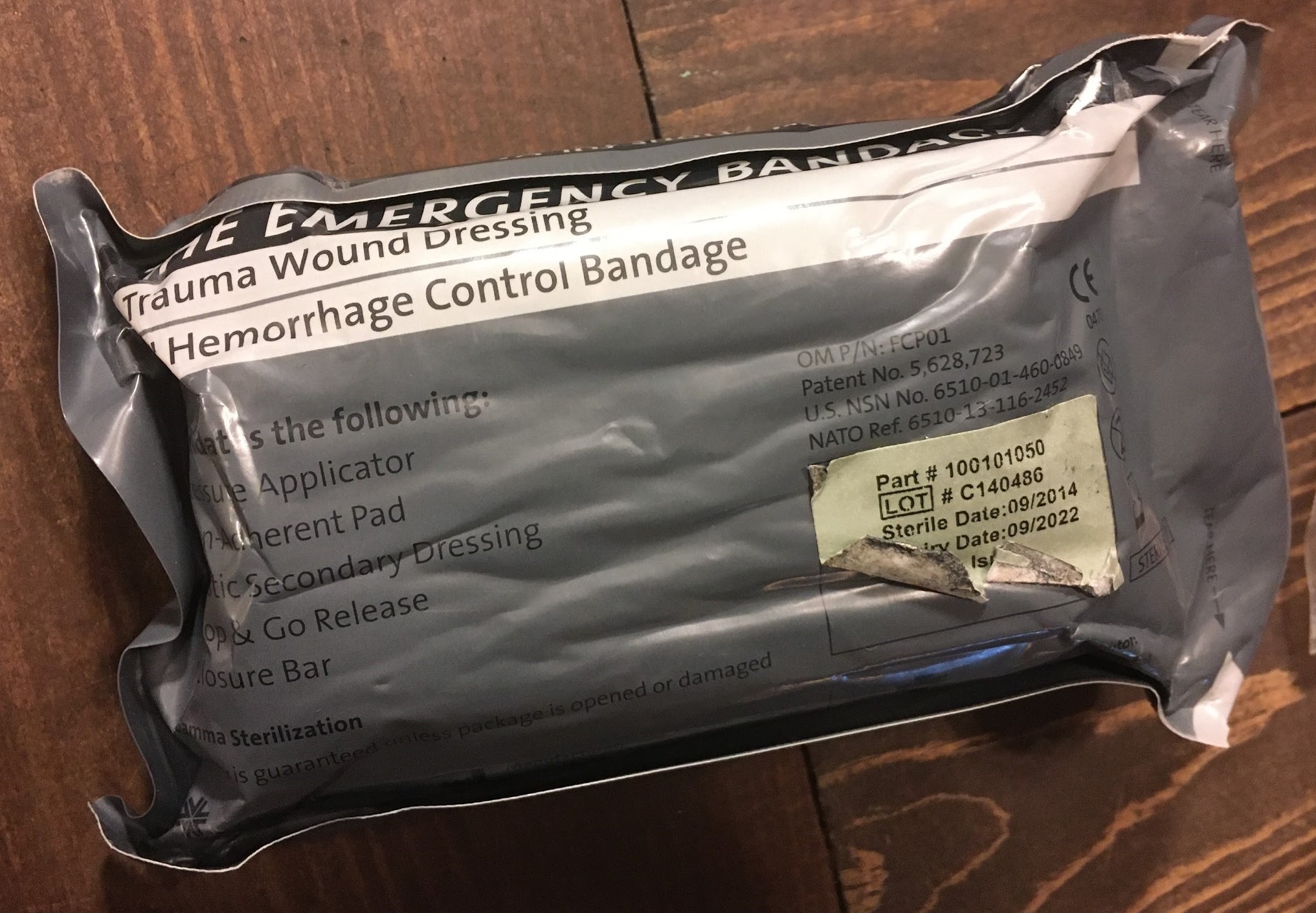 The Emergency Bandage. I prefer Tac Med Solutions’ Olaes, but this is what I had. Photo: author

Another interesting piece of information from this same presentation concerned a lethal injury to the femoral artery of Yorkshire swine, an injury that was treated with either Celox Rapid or QuikClot. “Celox Rapid had 75% haemostasis with no compression, compared to 38% for Combat Gauze. After one-minute compression, the results were 83% and 50% respectively.”

This has some interesting implications for tactical environments, as well as anywhere patient care may be interrupted or the provider may otherwise not be able to maintain pressure on the injury.

Celox also advertises a faster application time, but this is due to the shorter length but increased bulk of the product, which is fine if your wound is small, but could be problematic if the wound is larger or oddly shaped. I’ll leave this “merit-or-not” for the reader to decipher.

If you look at this study, published in 2019, you’ll find that when pressure is applied for three minutes to QuikClot or Celox Rapid, and then a simulated pressure dressing (10 lbs) is applied, there is a statistically significant difference between QuikClot and Celox, in favor of QuikClot: “One hundred percent of QuikClot subjects and 70 percent of Celox Rapid subjects” stopped bleeding once the simulated pressure dressing was applied. Over the hour the subjects were monitored, QuikClot subjects had no bleeding, but 40% of the Celox Rapid subjects continued to bleed.

I have seen data that suggests both QuikClot and Celox are effective in the presence of hypothermia and blood thinners like warfarin (Coumadin), but I am only aware of data on Celox in the presence of blood clotting disorders like hemophilia. Without getting too far into the weeds, Celox works independently of the normal “clotting cascade,” whereas QuikClot “helps along” the normal system, and therefore may not be effective if some parts of that system are broken or missing.

WHAT’S YOUR CONTEXT OF USE? 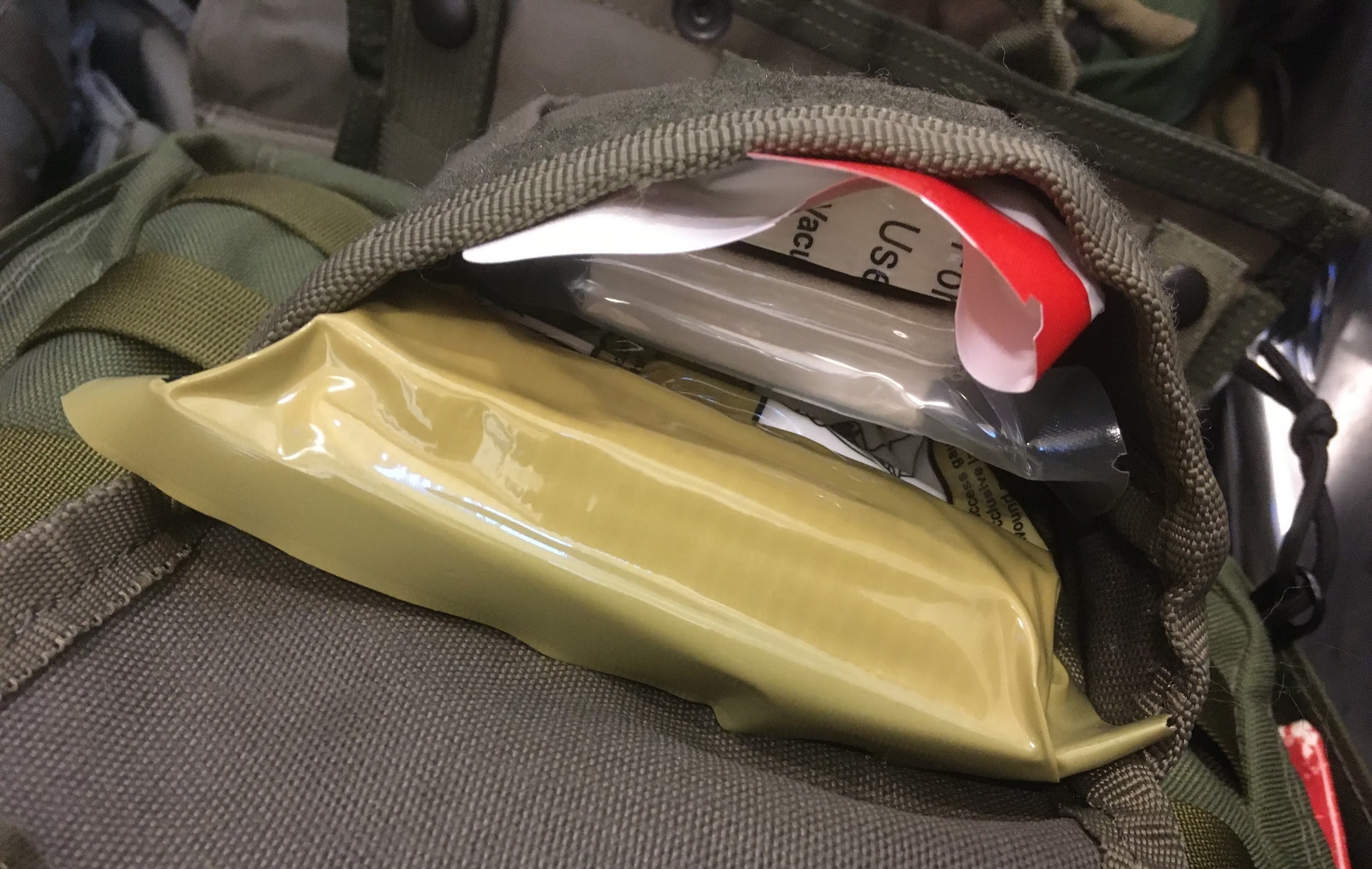 To sum it up, when you ask which is the “best” hemostatic agent, it’s far from a simple question to answer. The answer largely depends on your use case: If you’re in a relatively stable environment (civilian EMS, in-hospital trauma, etc), I’d seriously consider buying QuikClot, as it seems to have the most definitive evidence in its favor when used “by the book,” especially when it comes to rebleeding events.

But if you’re in a highly dynamic environment (e.g., combat) or an austere medicine environment (search and rescue, wilderness med), or have a specific need for something that may work in the presence of a clotting disorder, I’d probably choose Celox Rapid, since it stays in place even with suboptimal application, and it works outside the body’s normal clotting cascade.

With either product, spend the money and get the largest strip you can buy, to make sure you can pack even a relatively large wound, and get it in a “z-fold” style for ease of application. Also make sure to pick up a pressure bandage to finish off your application, and I recommend some plain gauze as well, just for good measure. 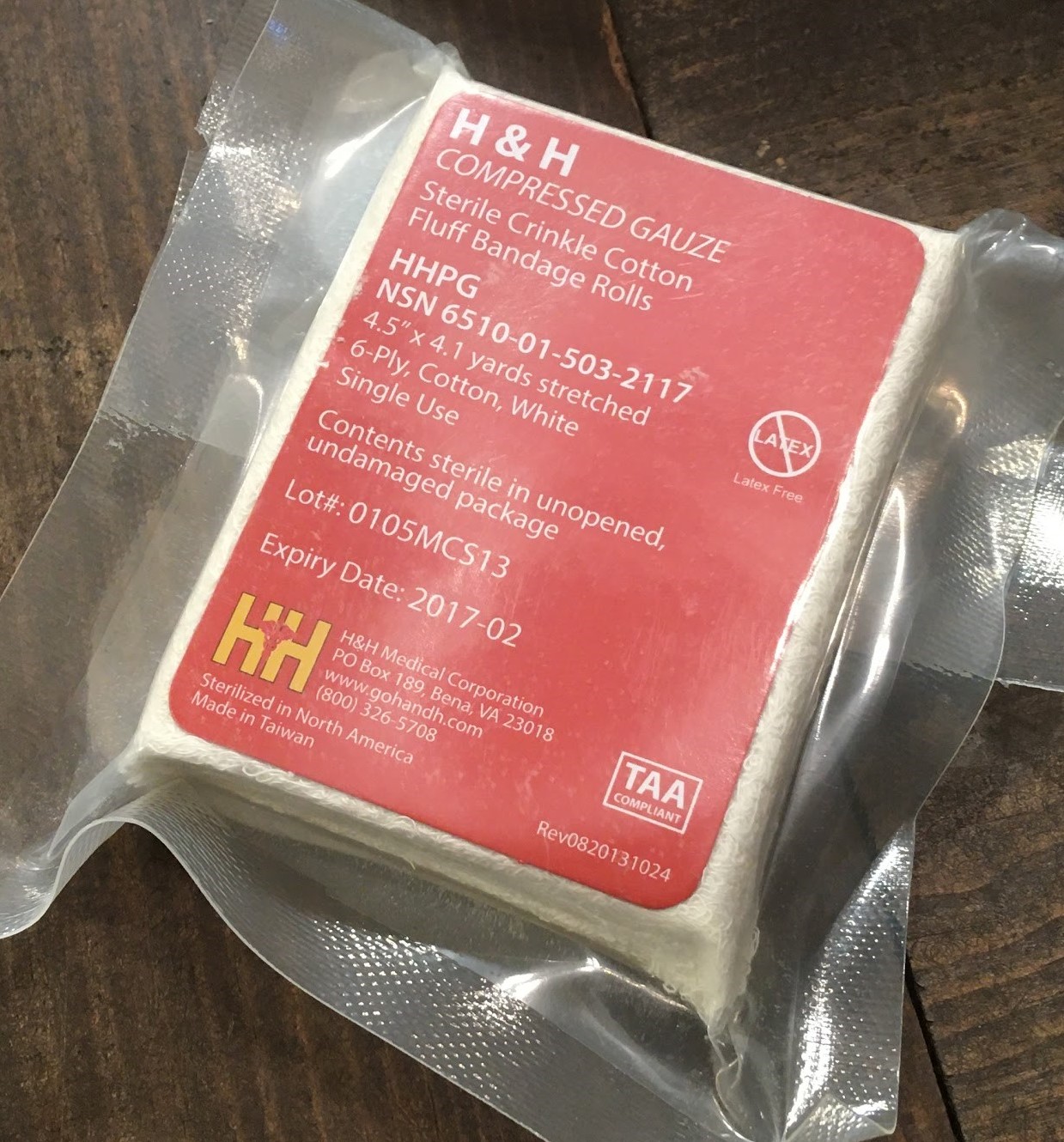 Incidentally, if you can only get plain gauze, packing a wound with plain sterile gauze is still far preferable to a t-shirt (although that’ll also do in a real pinch!). Whatever you’re applying, get that pressure on the bleeding vessel and hold it tight. Every second you don’t hold pressure tightly is a second you’re losing blood, and it’s possible to bleed to death from an arterial injury in five minutes or less!

Ultimately, the differences between hemostatic agents are relatively minor for the lay public. More than anything, I encourage you to seek training in emergency medical care. Whether that’s a Stop the Bleed class, an EMT or Paramedic certification, or joining your local volunteer fire department, all of those will bring you far more value in an emergency than any amount of either hemostatic gauze could hope to!

Stay safe out there.