Although recent trends in the law enforcement and commercial markets have favored striker-fired semi-automatic pistols for home and holster, the more traditional double-action semi-auto retains a strong presence. 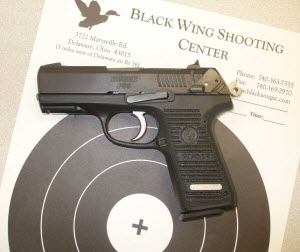 Look closely: this Ruger P95 is out of battery due to the slide going forward with the decocking safety deployed.

Many of these guns utilize a mechanical system to return a cocked single-action hammer to the resting double-action position. Commonly called a “decocking lever,” this device allows the shooter to replace the shorter, lighter single-action trigger pull with the longer, heavier double-action setting. The trigger in double-action mode is (in theory) more forgiving of unintended finger pressure and thereby less likely to produce an accidental discharge.

Decocker-equipped pistols are found worldwide in police and security service. The current standard issue and substitute standard pistols of the U.S. armed forces are double-actions with decockers, and they have long been popular with civilian users as well. In training with such pistols, the realities imposed by the decocker must be recognized and accommodated. 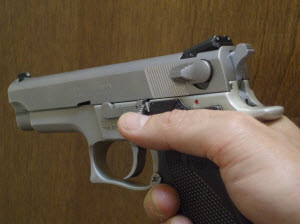 The exact function of the decocking mechanism has to be of primary concern, because not all decockers are created equal. They will largely fall into one of two categories: decocking levers and decocking safeties. A decocking lever acts as described above, while a decocking safety will combine the functions of both the decocker and a manual safety. The difference is obvious and vital: Is the pistol ready to fire after decocking or Is the safety engaged after decocking? It takes little imagination to appreciate the potential for disaster if the user isn’t fully familiar with the system at hand.

In many cases, a pistol manufacturer will offer a variety of systems available on the same platform. For example, a Beretta model 96G (decock only) looks almost exactly like a model 96FS (decocking safety) and it takes more than a casual examination to note the huge difference between the two. This is also the case with the well-regarded Smith & Wesson third-generation family of pistols. The Ruger P-series guns use a different shaped lever to help distinguish the two systems more readily. 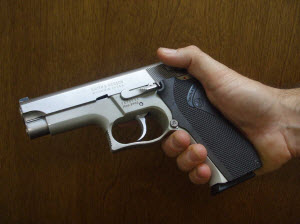 Shooter’s hand must crawl out of firing position so that thumb can operate decocking safety.

Manipulation of the decocking device becomes the next consideration, and the location of the lever will influence the chosen method. On most pistols, the decocking device will be in one of two areas: on the slide or on the frame. In either case, the important factor is the shooter’s ability to reach and use the lever. With the more common slide-mounted lever, most shooters will have to significantly alter or even break their normal firing grip to operate the device. For many, the needed leverage can only be gained by turning the pistol in the hand. This is undesirable from a training perspective, to say nothing of most safe gun handling considerations.

A much better option in this case may be to use the support hand to operate the decocker. As the support hand moves to join the firing hand in a proper two-handed grip, it can reach and deploy a slide-mounted device of virtually any design. The aforementioned Beretta and Smith & Wesson pistols work well this way because their levers rotate downward to decock, then must go back upward to the “FIRE” position. 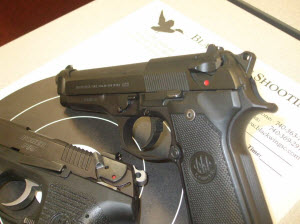 Slide-mounted decocking safeties can pose another potential problem. For reliable function, every semi-automatic pistol slide needs to slam home with all the force that its recoil spring can provide. It is well established that anything that impairs this slide movement can cause a malfunction by not fully seating a round of ammunition in the chamber. If a slide-mounted decocking safety is deployed in the downward “SAFE” position before the slide is fully closed, it can impede the slide’s movement. This problem is most visible with inexperienced users to whom chambering a round with the “safety” turned off seems counterintuitive. Understanding the system and training to support it will help keep “out of battery” experiences to a minimum. 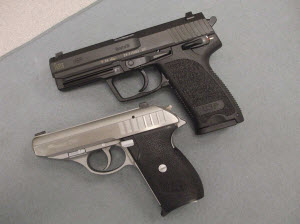 Frame-mounted decockers, such as those found on the classic SIG Sauer pistols or some Heckler & Koch models, can be easier to deploy because they tend to be located near the shooter’s thumb. It is, however, a function of the size and shape of the user’s hand that dictates if a firing grip can be maintained while using the decocking device. Once again, there can be an advantage to training the support hand to reach what the firing hand cannot. 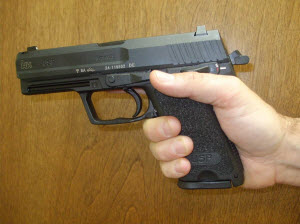 Frame-mounted decocker is placed within easy reach of shooter’s thumb.

Although not exclusive to decocking devices, shooters and instructors must emphasize consistency in their training. Once a safe and efficient technique is identified, it needs to be imprinted through repetition. In short, if you decock your pistol and choose to leave the safety engaged, fine. Always do it that way. Under stress and in imperfect conditions, you are far more likely to find your pistol in the condition of readiness that you expect if you have trained consistently in that manner. The difference between success or failure, on the range or on the battlefield, is a function of the quality of our training and not the particulars of our equipment.
Reply to Venus