Deter. Detect. Defend. is a phrase used for many things, including identity theft awareness and various military units. I picked it up while serving in 3rd FAST Company, and it has served me well ever since. I believe that when this approach is applied to the concealed carry holder, it will greatly increase their awareness of potential threats and aid them in responding with an appropriate solution, up to and including deadly force.

An attack can happen when you least expect it. Author simulates responding to an attacker while taking out the trash. Swing wide when taking corners and glance toward blind spots (in this case behind the vehicle).

Many of us will feverishly train our firearms-related skills, as we should, but forget that being more aware of our surroundings and picking up on pre-threat indicators should be crucial portions of our training. Most people would agree that if I were the fastest and most accurate shooter in the world, it would greatly increase my chances of surviving a gunfight. But what is to be said for being able to avoid a gunfight? How is this skill measured? Who really knows the appropriate response to a threat in a given situation? In this article, you will learn viable techniques that you can use in situations ranging from that uneasy feeling as a stranger approaches to a lethal fight for your life.

This is the most overlooked or disregarded piece of the defensive pie. Ask yourself, “What can I do to make myself appear to be a more difficult meal ticket to a criminal who is willing to do me harm for their benefit?” For home defense, alarm system signage (“Protected by Company X”), well-lit points of entry, visible cameras, and shrubbery or discouraging obstacles under windows serve as excellent visual deterrents for a potential home invader. You may not have the resources to actually monitor the cameras, or you may let your alarm monitoring service lapse. But remember, these are visual deterrents and don’t have to be backed up with solid security, only appear to be. Obviously we should maximize our security whenever possible, but if a home looks more secure, the criminal may believe it’s tougher to gain access. 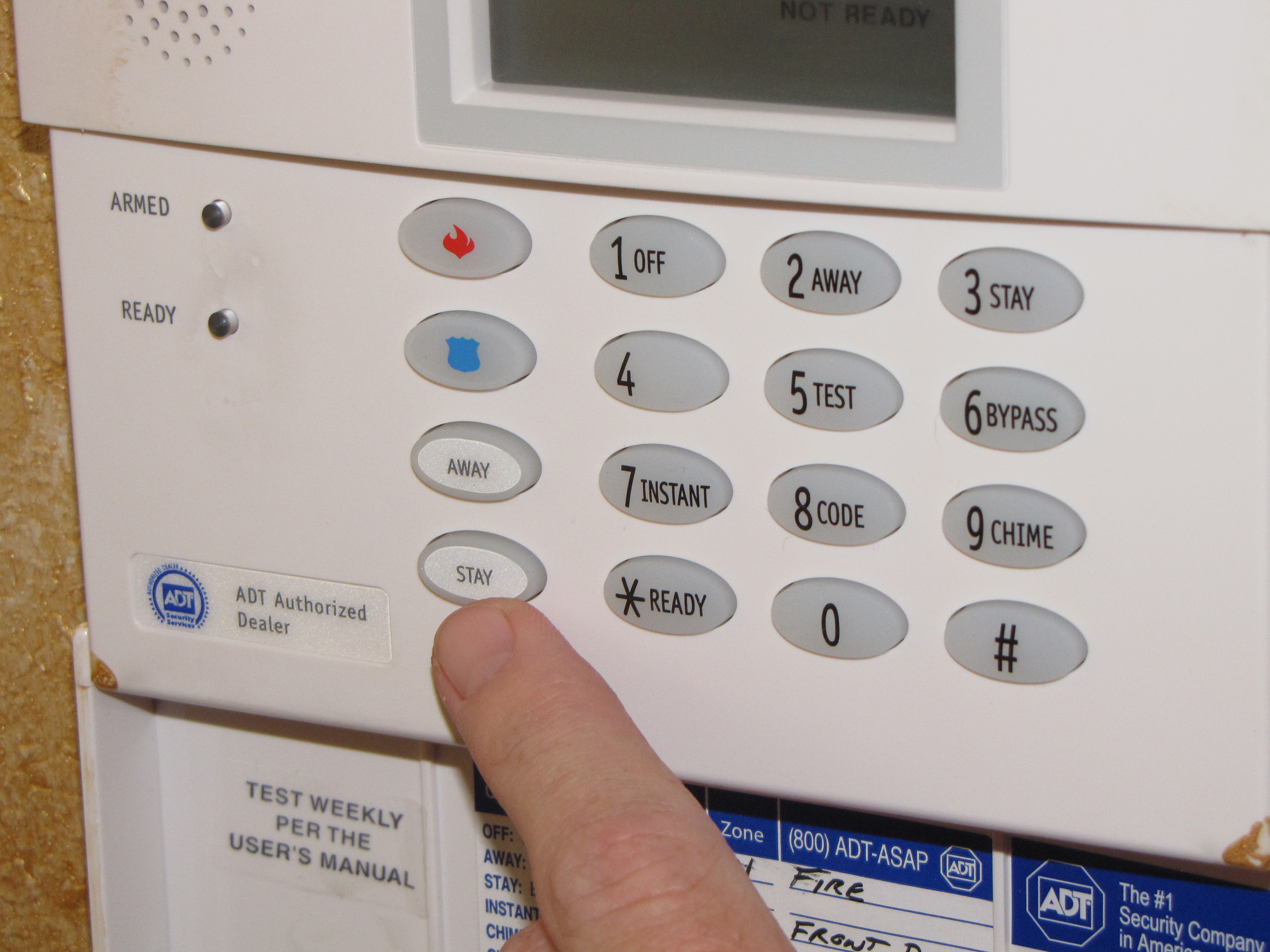 Having an alarm is one thing. Setting it is another.

When we think about defending ourselves outside the home, we have to look in the mirror. It doesn’t take a criminology study to see patterns of predatory criminals who seek their “prey” on the basis of risk vs. benefit. Physical fitness, size, stature, being perceived as intimidating, and most importantly being obviously aware of your surroundings are some of the key visual deterrents that will make you appear to be a less appetizing victim. I understand that we can’t change if we are 5’7”, confined to a wheelchair, or display certain other “easy prey” attributes. But we can change how we carry ourselves, how physically fit we are, and how often we make eye contact.

Often perception is reality. Think like a criminal to prevent becoming a victim. Think about the things that would deter you from robbing (if you were a criminal) other individuals and homes as you are out and about. Think about how those deterrents could be applied to your life.

Detection is being able to determine potential threats to increase your ability to apply a proper response. It is important to note that Detect has little to do with the actual use of a firearm and more to do with putting yourself (if necessary) into a better position to Defend. For Instance, “GUN!” is often a command to commence a string of fire, building a response to the verbal stimulus of the word, rather than the visual stimulus of an actual gun. This command is fine as long as the shooter understands it doesn’t really develop any detection skills. 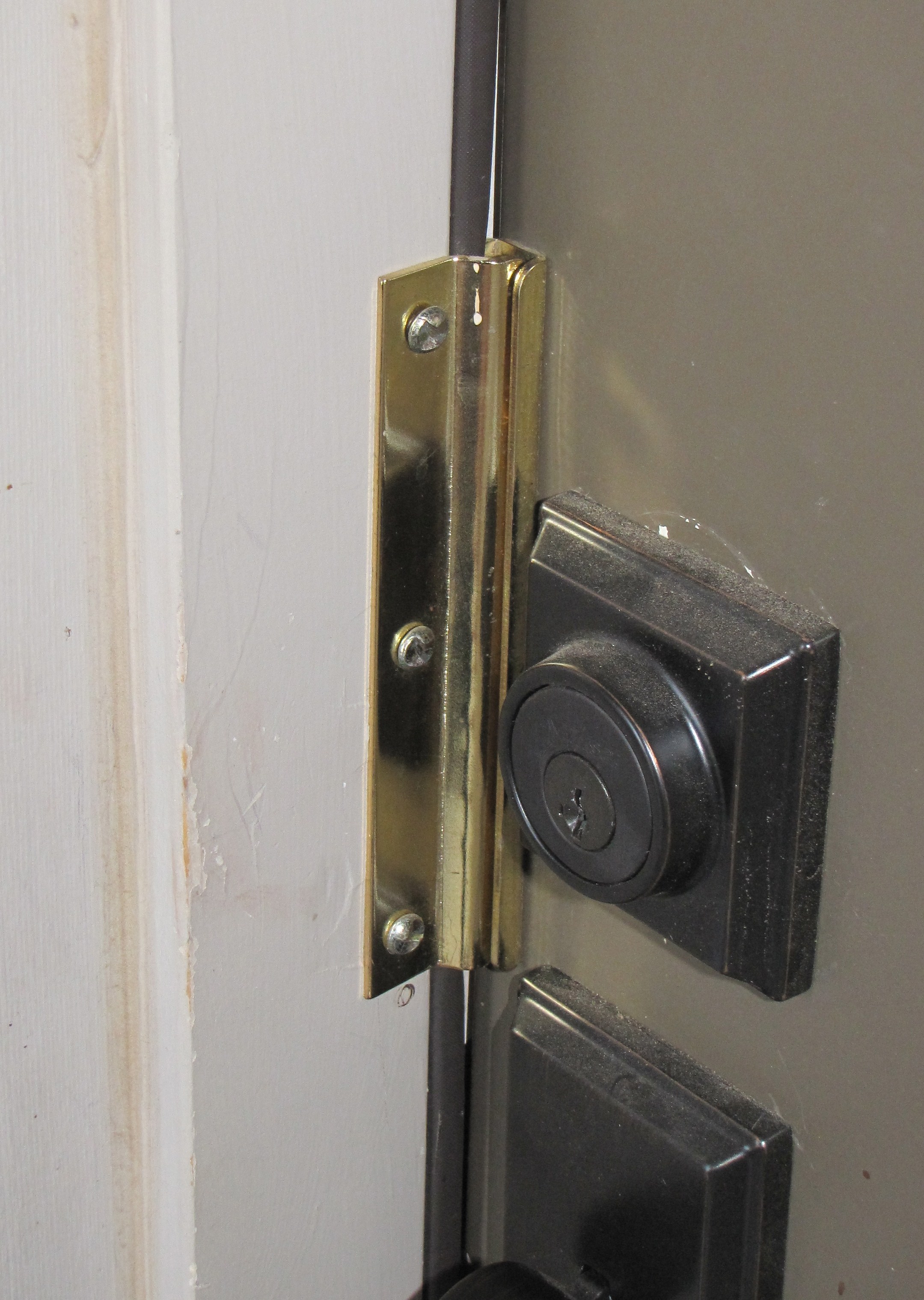 This anti-pry shield is one of many cheap, easy-to-install security devices on the market for doors and windows.

Physically this is applied to actually having service for that alarm system, monitoring the cameras, looking around, and using your eyes to gather information. Whether you hear your alarm go off in the middle of the night or have an unknown person approaching you with their hand in their waistband, if the visual or auditory alarm isn’t passed, we are left unaware of the potential threat. To effectively detect, you must have the cognitive ability to assess pre-threat indicators that may turn an unknown contact into a very real threat very quickly. Body language is important: visual clues such as facial grooming and looking over the shoulder may give you the indicators necessary to defend in an acceptable window of time.

The faster you detect, the more options you have, and the more time of awareness and increased probability of survival you gain. Just because you can use your gun doesn’t mean you should use your gun in a given situation. Look around your environment for things that make you feel uneasy. Pay attention to your sixth sense. Yes, I’m telling you to profile. Look for commonalities among violent criminals and become aware of them. Seeing a blood killer or swastika tattoo on someone’s neck in an unknown parking lot might be a good indicator not to follow him into a dark alley.

The End State. I think of this as Active Defense. Whether you saw the attack coming or were caught completely by surprise, action is required and you must defend. In the fight your abilities, training, fitness, gear, and mental strength will be tested. This is where effectiveness matters. Stopping the threat without death or serious bodily harm done to the home team is a solid goal that can be achieved multiple ways in most scenarios. Simply put, we all need to train harder for what we are likely to encounter in the event of a life-threatening situation. Put your focus in the fight and keep it there. 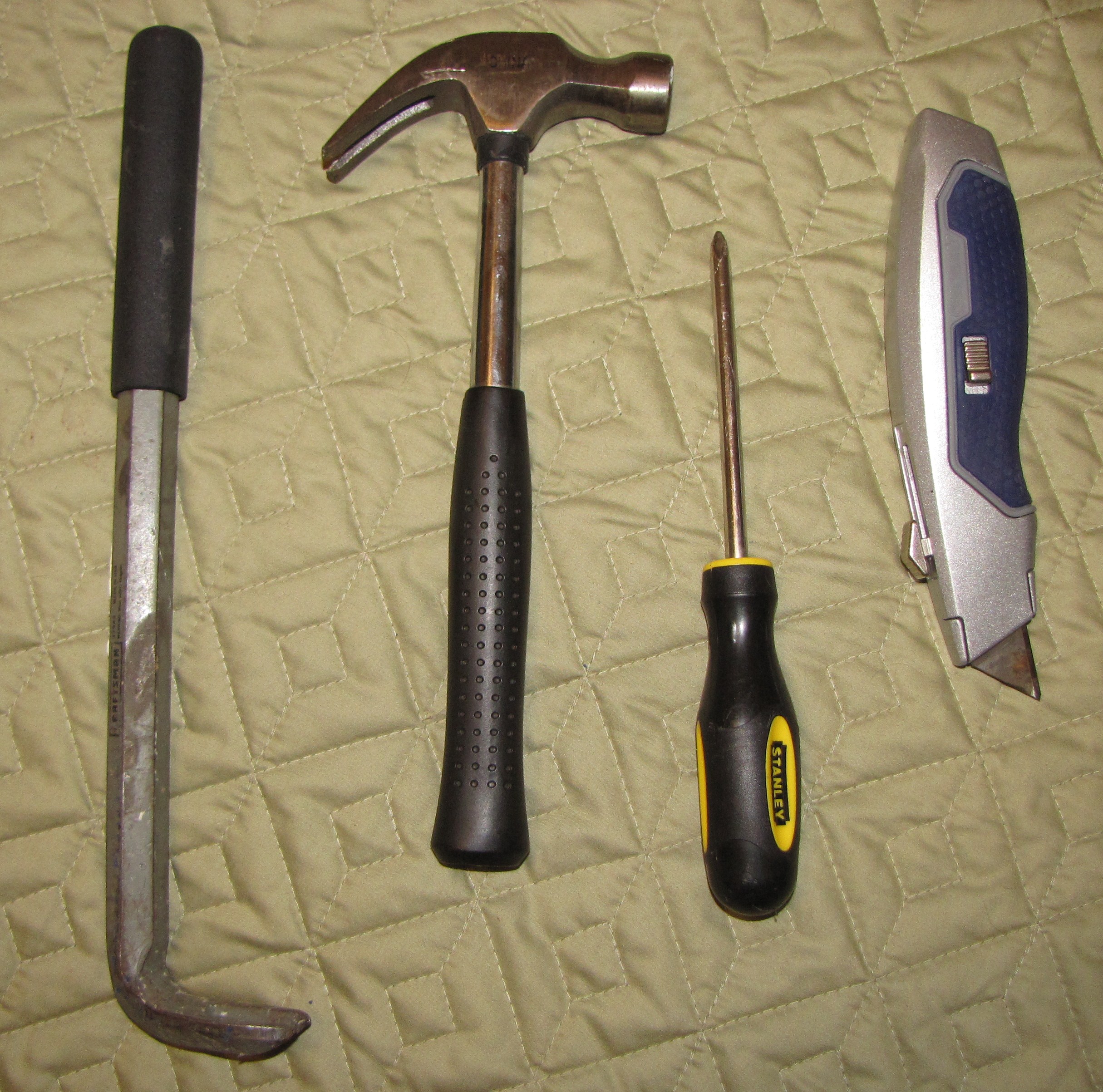 The US Shooting Academy taught me a valuable defensive technique referred to as the Fence and Tape Loop. When there is a perceived or potential threat, bring your hands up between your face and the threat, palms out, close to your body, essentially building a fence. This is important because it gives you multiple options, such as going hands on, defending your head, or accessing your defensive tool.

The tape loop is a rehearsed verbal declaration that is short and concise, and becomes increasingly aggressive as repeated, such as, “Stop! Get Back!” Often a mugger will draw a victim in with a criminal interview, which is simply a question that allows them to get closer to you without raising much alarm. This is why your tape loop should become more aggressive as commands are ignored, while you attempt to gain distance or a position of advantage. It is understood that you can’t scream “Get back!” at everyone who asks you for a cigarette.This is why practice and rehearsals (as ridiculous as they may feel at first) are essential for this to be an effective technique. 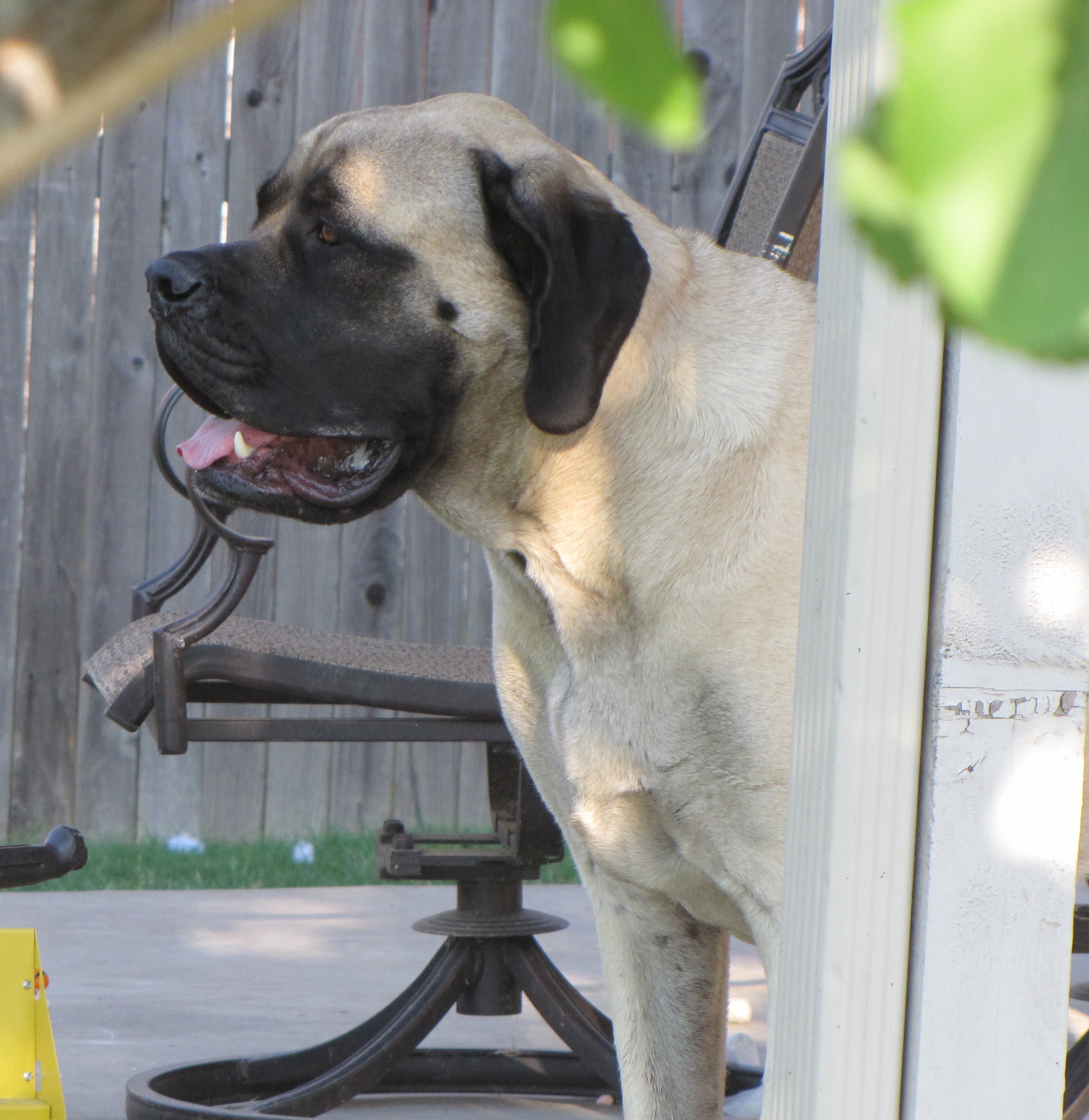 Dogs can act as a deterrent, aid in detection, and potentially defense.

Take into account all the factors that are likely to occur when you have to defend yourself, identify your strengths and weaknesses, and most importantly, start training. If you haven’t had the opportunity to engage in scenario-based training, it’s a good place to start identifying the areas where you need the most improvement.