It’s a long debated issue that boils down to the local level choices based on culture, budget, and more.

In a recent story from Sarasota County in Florida, Fire Department paramedics responded to a call at 2932 Goodrich Avenue around 4am for a person who had reportedly taken a fall. When the paramedics arrived, the resident at the home told paramedics that they had not called for help. According to Sarasota Police, the paramedics started walking back to the ambulance and a man in a hoodie appeared and fired several shots at them, striking the front driver’s side door at least twice. 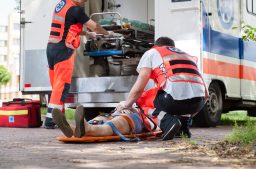 The story raises many questions. A friend and local firefighter instructor in Fort Lauderdale Florida has shared enough stories to make us believe it warrants a discussion. He has seen incredible circumstances. These include the shooting at the baggage claim in the airport in Fort Lauderdale to gangs preventing treatment of their victims….at gunpoint.

In Las Vegas, the “Las Vegas tactical paramedic team” was formed in wake of shooting there. This new team is made up of eight paramedics who will now be on the front lines with firefighters and police officers, and they all were body armor.

Should medics, paramedics, and other normally unarmed first responders be able to arm themselves if they own a concealed carry permit? Should the agencies provide and or allow body armor?

Let us know what you think below, or join the discussions goin on over on our face book page!

7 Responses to “Do paramedics and Firefighters DESERVE to be armed and wear Armor?”