The Other Side of the Close-Quarter Dilemma 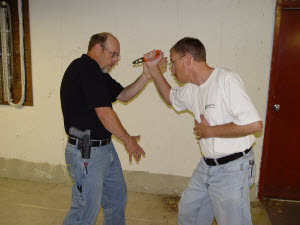 Since Sean Connery’s unforgettable scene in the movie The Untouchables, the concept of “Don’t bring a knife to a gunfight” has become almost a cliché in the firearms training world. Indeed, most firearms training programs that include close-quarter shooting techniques advocate dealing with a knife-armed attacker by immediately drawing and firing one’s weapon. Often this is done in conjunction with a simultaneous striking or fending action with the free hand.

While this may work on the range against stationary two-dimensional targets, this approach is decidedly less effective when used against a motivated, mobile attacker. If you train seriously—which means you engage in force-on-force training with live partners in addition to square-range training—you will quickly discover that most commonly taught close-quarter shooting techniques fall apart very quickly. At best, you’re looking at a “mutual slaying” in which both you and your partner suffer serious, potentially mortal hits. Obviously, that’s not good enough.

In my opinion, the reason for the catastrophic failure of most close-quarter shooting techniques is that they were developed from the mindset of a gun-armed defender. Since a knife attack is a lethal-force situation, a gun-armed person will automatically opt to use his firearm to counter that attack. This seems logical because the firearm is not only a tool capable of delivering a matching level of lethal force, it is also a projectile weapon that affords the user the safety of distance.

The problem with this logic is that, against a close-range attack, you have already lost the advantage of distance. Whether you like it or not, you have brought a gun to a knife fight. And in the circumstances of a typical knife attack, the knifer has the advantage. Here’s why:

1. Most close-quarter shooting techniques rely on striking or fending off the attack with the free hand. Let’s think about this for a moment. A knife-wielding assailant already within striking range is attacking you. Your response is to fight him off using only your weak hand? If you were not armed with a firearm, such an act would be suicidal. Well, even if you do have a firearm, it’s not a great idea (see item 2).

2. One myth of close-quarter shooting is that as soon as you draw and fire, the scenario ends and you are safe. Again, let’s think about it. At seven yards, your training has you prepared to shoot as many rounds as necessary to stop your attacker, literally “shooting him to the ground.” Why is that? Because everyone knows that pistols are unreliable stoppers, a pistol is for fighting your way to a long gun, etc., etc.

Well, if all the uncertainties of stopping power apply in long-range gunfights, they apply with a vengeance at close range. Unless you are lucky or skilled enough to hit the spine or pelvis to drop your attacker instantly, you’re still basically fighting a knife-armed attacker with one hand.

You might be thinking that hitting a fight-stopping target would be easy at close range. After all, you’re shooting at arm’s length or less. Unfortunately, this is not the case. For most close-quarter shooting techniques, shot placement depends upon the physical indexing of the weapon against your body. Needless to say, this is not the best way of guaranteeing good hits. If you further complicate the situation by factoring in the reality that both you and your “target” will be moving and involved in a physical struggle while you try to shoot, you’ve got a gourmet recipe for marginal shot placement.

3. Most close-quarter shooting methods also fail to take into account the effects of the startle response during a violent attack. In recent years, there has been a lot of research into the effects of stress on the performance of coordinated movement. This research has shown that, in situations of sudden extreme stress, gross motor movements override fine and complex motor skills. A realistic defensive tactic should therefore be based primarily upon gross motor movements.

If we examine the close-quarter shooting techniques commonly taught today, we’d find that many of them include gross motor skill strikes. This is good. The problem with these techniques is that, at the same time a person is executing these adrenaline-charged gross motor movements, he must simultaneously perform the complex motor skill movements of drawing his handgun. The complex motor skills of drawing a handgun are already difficult to perform under stress. How can we realistically expect the average shooter to do this while at the same time delivering full-power strikes with the other hand?

4. The final disadvantage of close-quarter shooting methods is that they only allow for a maximum-force response. If a person carries a handgun as his sole means of self-defense and does not develop any other defensive skills, he is limited to defending himself against attacks that involve either a threat of lethal force or a severe disparity of size or number.

This is one of the primary faults of this entire class of technique. Because these techniques provide only a maximum-force response, they either encourage overreaction or leave the defender totally unprepared for non-life-threatening attacks. As the saying goes, “To the man who only has a hammer, every problem looks like a nail.”

My initial self-defense training was focused primarily on empty-hand, knife, and stick fighting. Consequently, my perspective on close-quarter tactics was rooted in hitting, kicking, and cutting before it evolved to include shooting. Because of my initial training, I not only know how to hit, kick, cut, and stab a person at close range, but I also have a better-than-average understanding of how to keep someone else from doing those things to me.

The bottom line in a close-range attack situation is that your first priority should not be drawing your weapon; it should be saving your life. If a knife-wielding assailant attacks me at a range of a few feet, there is a high probability that I will get cut. That is reality. If I respond to the attack with a well-structured empty-hand defense that is consistent with the effects of the startle response, I can drastically reduce my chances of being fatally cut or stabbed.

I can also change the spatial relationship between me and my attacker, either “getting off the X” or, as I prefer to do it, “moving the X” to deflect the attack and break the attacker’s balance. In the process, I may also be able to get in a strike of my own to stun my attacker. Both of these actions not only keep me safer than warding off the attacker with one hand, they also create the time and opportunity to back away and draw a weapon.

Conversely, if I focus on drawing my weapon while attempting to fend off the attacker with only my weak hand, I will probably be cut repeatedly and severely. Even if I do get off a shot and hit my attacker, the odds of it stopping him instantly are not very good. Again, fighting at arm’s length, I will undoubtedly suffer one or more cuts or stabs before the attacker goes down.

The best thing about this prioritization is that it allows you to sequence your skills rather than trying to integrate them. Remember that striking and close-quarter empty-hand fighting are basically gross-motor-skill events. You will be doing your best to hit the attacker as hard as possible.

Once you have done that and earned an opportunity to create distance, you can transition to the complex motor skills of drawing and firing your pistol. In fact, that process will be exactly the same as if you were responding to a threat at a greater distance, because functionally that’s the situation you’ve created.

By separating the empty-hand and drawing processes, you make each action more effective. The empty-hand response stuns or moves the attacker and is a physical release of stress for you. This buys you time, distance, and a modicum of composure before you attempt the complex process of drawing your gun.

This makes a lot more sense than trying to deliver gross-motor-skill hits with your weak hand while you do a complex-motor-skill draw with your other hand. Unless you have a very high level of training, those two actions just don’t go together well.

Separating the striking and drawing actions also reduces the chances of shooting your own hand and arm during the draw. Although most close-quarter shooting methods teach hitting high and shooting low to avoid this, in a dynamic struggle with a moving attacker, the odds of having your striking hand shoved in front of your muzzle are high.

Finally, sequencing your empty-hand and drawing/shooting actions allows better shot placement and more reliable stops. Since the defender can use his standard shooting technique, he can place his shots much more accurately than he could trying to shoot while still involved in a violent hand-to-hand struggle.

Clichés don’t do much against a real knife attack. Unfortunately, neither do gun-centric techniques like the Speed Rock or Shove-and-Shoot. To maximize your chances of survival, learn to use sound empty-hand skills to create the distance and opportunity to employ equally sound shooting skills.