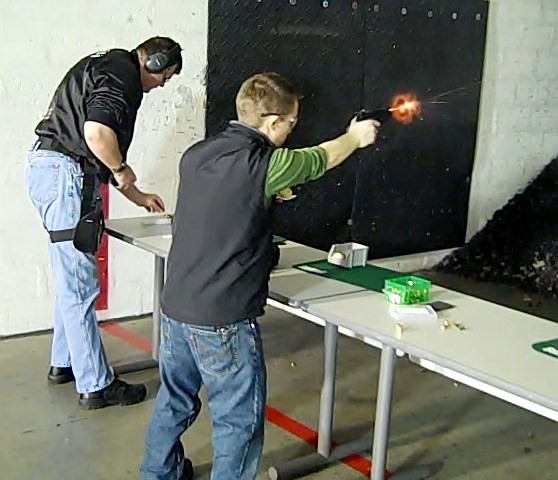 Anyone reading this is likely aware of the need for frequent and realistic firearms training with their defensive firearm. It should also come as no surprise that the vast majority of us simply don’t have the time or resources to train the way we should, as often as we should. Now ask yourself: how many people do you know who keep … or even carry … a gun for protection but don’t train as much or as hard as you do?

As a trainer working for Black Wing Shooting Center, a range that is open to the public, I am always looking for ways to get more customers through the doors. These are the people who are going to sign up for classes, train and practice, and keep me and mine out of the unemployment line. So by now you may be curious: what do these two trains of thought have to do with each other?

Not long ago, I was tasked with creating a weekly “Fun Shoot” firearms training program for our customers at Black Wing. The idea was simple: I was to invent or otherwise create a contest or game that would entice owners of defensive-type handguns to come in and give it a try. It had to be simple, fun, and fast, with no elaborate set-up and at little cost to the participants. Oh, and it had to be something different every week.

I added the final requirement myself: each event would incorporate a useful defensive gun-handling skill and would not encourage the development of a bad habit that would have to be “trained out” later. After all, these are folks who I hope to train with somewhere down the road. Bear in mind that these are simple ideas that are certainly not for instructors only. They can be used by anyone on almost any range. Feel free to duplicate them, modify them, or ignore them altogether.

o that’s the background: now that we know why I did them, here (in no particular order) are some of the things that I did. 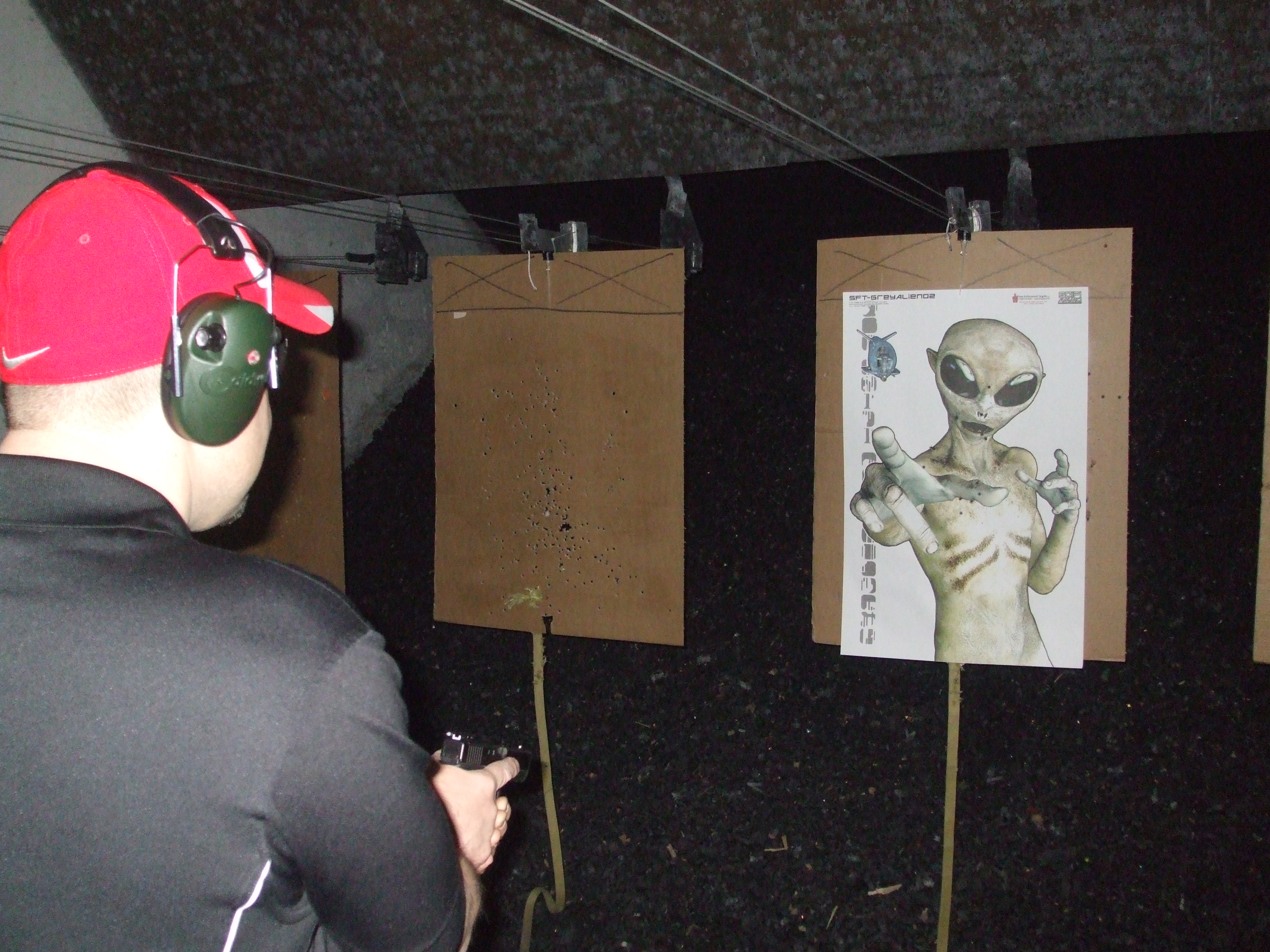 I started with a supply of Sci-Fi Grey Alien targets from Law Enforcement Targets. If you haven’t seen these, you need to take a look. They’re pretty cool.

The aliens were placed at three different distances and visibility was decreased as the range was increased. This forced shooters to work in a combination of darkness and distance. After 20 rounds (four five-round magazines or cylinders), they were presented with the final challenge: Each shooter had to stand at a bench directly in front of an alien target five feet away. The pistols were at slide-lock and lying on the bench. The shooter had to pick up the pistol and a five-round magazine from the bench, load, and shoot the alien target five times.

Although the lights were on, shooters wore safety glasses that were blacked out with electrical tape! Of course, this was done with a Range Safety Officer directly on top of the shooter, and the shooters themselves had already demonstrated safe and solid gun-handling skills. This is not a good fit for newer shooters! There is likely no value in shooting in complete darkness, but this does demonstrate the value of developing a natural point-of-aim and the ability to manipulate the gun without looking at it.

The targets were scored by counting hits on aliens and then drawing a name from the hat!

I gathered several common handgun security products, including two quick-access pistol vaults, a simple lock box made to slide under a car seat, generic clamshell trigger lock, and generic cable lock. Just for fun, I threw a concealed-carry day planner (with hidden zippered compartment for the gun) and even a hollowed-out book into the mix. The only other things needed were a shot timer and virtually any sort of target. The course of fire was pretty straightforward: under time pressure, each shooter had to access their handgun, load it, and engage their target. We did it in a round-robin fashion, so that each shooter had to use each device. We locked up empty guns mainly to complicate the problem.

Our results were a bit surprising: The quick-access vaults — the Winchester e-vault and Smith & Wesson Versa Vault — scored high marks, as anticipated.

The key-operated lock box was faster and easier to use than most of the shooters had predicted.

The key-operated trigger lock and cable lock, on the other hand, were universally considered ridiculously awkward and slow to use. They also required most folks to slow way down and concentrate on not turning the muzzle in an unsafe direction.

The real eye-opener was the day planner. It has no locking mechanism and yet was declared the slowest and least user-friendly of the bunch. This is a sobering thought when one considers that it is designed as a carry method, not a security device. There was a lot of speculation that if it were this difficult to use off a bench, just imagine having it in your hand when an attacker jumps you in a dark alley!

The participants found that using any of these products under stress would require practice. 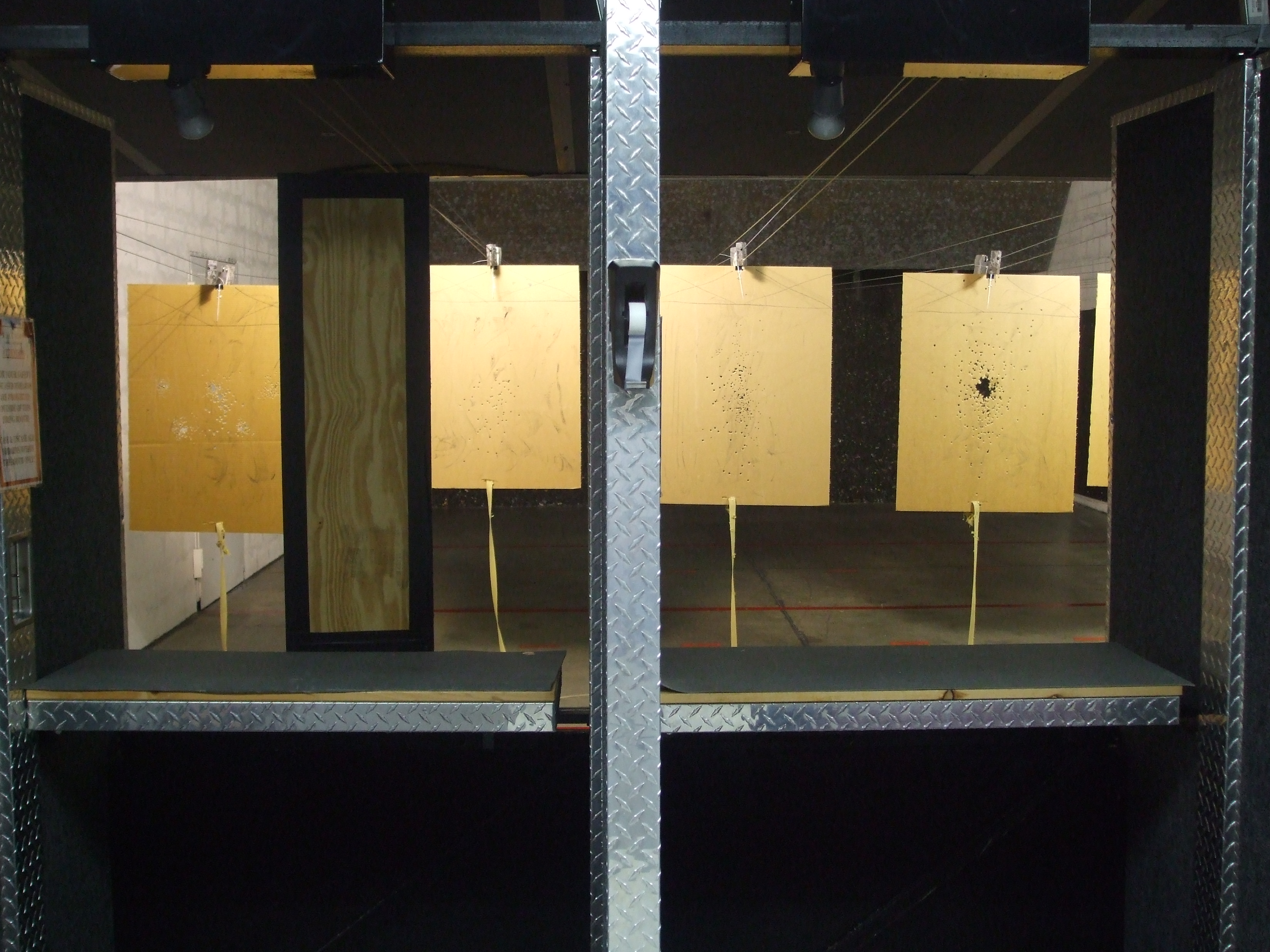 This is the simplest firearms training event to describe: any timed and scored course of fire (I used the Glock/GSSF indoor “Option D” course) and fire it entirely from behind cover. There are hundreds, if not thousands, of possible variations. The point is to shoot from the barricade, because that will take most people out of their normal square-range comfort zone. Our version required both strong-hand-only and weak-hand-only strings, further complicating the problem, naturally.

Finally, we come to the activity that caused both the participants and my co-workers to wonder if I needed closer supervision: The Relay Race.

I established a line of tables, about 12 feet from the backstop, and designated it the Firing Line. Lined up on the tables, one per participant, were a small plastic box and cleaning mat. Uprange, I designated the Rear Line, actually the bench positions that are normally the firing points. Also at the Rear Line were a small plastic box containing five standard golf balls, and a plastic picnic spoon. The game worked as follows:

At the Firing Line, the shooter saw a small target positioned at the backstop. The shooter picked up the pistol in the dominant hand, aimed and fired five shots at the target while keeping the golf ball balanced in the spoon (in the other hand).

One racer reloads while another fires on Relay Race Drill.

This cycle continued until shooters were out of both ammunition and golf balls. Scoring could be on the target, on time, or on number of golf balls successfully moved from the Rear Line box to the Firing Line box. We scored the targets and levied a penalty for each dropped golf ball (carrying them in a spoon isn’t as easy as it sounds).

Readers are asked to remember that nobody, myself included, is going to mistake these little games for real, high-value firearms training, which should incorporate physical and psychological stress and complex shooting problems that we must deal with at uncomfortable speeds. These games don’t provide much of that. They are, however, a few ideas of how a limited schedule and budget can provide some interesting alternatives to the same old square-range practice routine. Maybe they can even lure out some of your training partners or shooting buddies who have grown bored and begun making excuses for why they haven’t shot their defensive gun lately. (I like to call this the “gym membership” effect — after awhile we don’t even go anymore!)

In closing, I encourage everyone to make free use of these ideas. I look forward to hearing any other suggestions you have. I’m going to continue this program at Black Wing Shooting Center and will always welcome new ideas.

While we all recognize the cold, hard realities about firearms training for real-world combat, it might in some cases be better to have a little ice cream, even if we can’t always get just the ice!