In what can be called a “must see adult conversation” about school shootings in America, Joe Rogan and Andy Stumpf break down some of the pieces of the puzzle that asks the questions “WHY?” and “How can we stop them?”

Asking about the LOCATION aspect, Andy makes a great point about the absence of shootings at school where the president’s children attend. There are layers of security on the campus that thwart the threat and make it much harder to even think about attacking them.

He also gets into the more ominous side of these incidents, the MOTIVATION behind them. What turns a kid into a killer? Why would a 17 year old get to the point that they would want to kill classmates of theirs, many whom they have known their entire lives?

The shootings have 2 things in common every single time – the gun and the shooter. Why do we seem to only address one of them, the gun? Stumpf and Rogan address this issue talking about the correlation between psychotic medications and the kids who attack schools. Their conclusion? It’s much more difficult to address the mental health side of things than to attack the tool used, which is where most of the concentration his after a shooting or during a discussion about possible solutions. 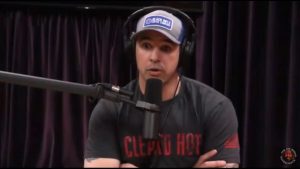 What do you think about their opinions? Leave us a message below or comment on our Facebook page today, we want to hear what YOU have to say!