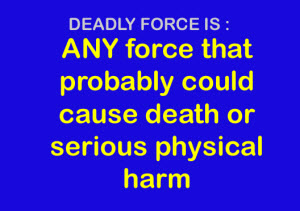 In Know the Law, Part I, I discussed the definition of deadly force and when you may be able to use it in self-defense. Now let’s look at the legal guidelines for using deadly force.

Every state has guidelines for the use of deadly force. If you are a legally armed citizen, it is your responsibility to know those guidelines before you carry a gun for personal defense.

As an instructor certified to teach the use of deadly force, I have seen similarities in the laws of many states. Below are some common guidelines that may help you prepare to make the decision on using deadly force.

Most states follow guidelines that require the suspect to meet four criteria before you can use deadly force against him. They are:

The suspect must display INTENT to cause or attempt to cause serious physical harm against you or someone you intend to defend. That intent is demonstrated by the actions of the suspect.

Bruce is walking through the park. Bruce sees a person, Jim. He has had many heated arguments with Jim in the past over a love triangle. The last time they argued, Jim threatened to kill Bruce.

When Jim is about 30 feet away, Bruce sees Jim pull out a long, military-style knife. Jim has a look of extreme anger on his face. Jim raises the knife high above his head and screams, “I’m going to kill you, Bruce!” and starts running full speed toward Bruce.

Bruce is a legally armed citizen with a concealed carry permit. Because he is in an open park with no cover or area to retreat to, Bruce draws his handgun. Jim is quickly closing the gap between them. Bruce begins to step laterally to avoid the wild attack and fires in self-defense.

In this situation, Bruce can articulate Jim’s intentions by stating that Jim:

Bruce can articulate that Jim had the intent to cause serious physical harm or death.

In most states, any force used must be in balance to the force used against you. For instance, if someone came up to you during an argument and punched you in the face, most states do not permit you to pull a gun and shoot him in the face. You probably could not articulate that the action of being punched in the face warranted shooting the person unless there were additional extreme circumstances. 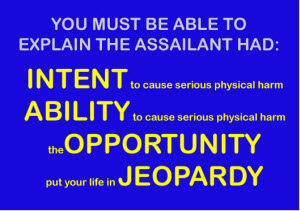 In the scenario above, Bruce sees what appears to be a deadly military-style knife.

The suspect must display APPARENT ABILITY to cause or attempt to cause serious physical harm against you or someone you intend to defend. That apparent ability is usually demonstrated by the weapons available to the suspect.

In our scenario, Jim has a deadly weapon, the knife. He is rapidly approaching striking distance. The totality of circumstances demonstrates that Jim intends to use the knife as a deadly weapon to cause or attempt to cause serious physical harm.

The suspect must have the OPPORTUNITY to cause or attempt to cause serious physical harm against you or someone you intend to defend. That opportunity is usually demonstrated by the surroundings between you and the suspect.

Take our scenario with Bruce and Jim and change one thing: Bruce is inside his home and hears Jim screaming outside. Bruce is still armed. The doors are locked.

Bruce looks out the window and sees Jim running around, flashing the knife and screaming that he is going to kill Bruce. This time Jim cannot get to Bruce because of the house with the locked doors. Jim does not have the opportunity to cause serious physical harm at this point. As a result, Bruce cannot fire through the door or an open window. Bruce should call the police and stay inside.

If Bruce steps outside, he may be considered the aggressor. Bruce was safe inside. The reasonable and prudent person might believe Bruce was looking for a reason to shoot Jim by stepping outside with the gun.

The totality of circumstances must put you or the person you are defending in jeopardy of serious physical harm. This just wraps up the whole situation. The first responding police officers, the prosecutors, judge, and jurors will look at the whole situation to decide whether you acted in a reasonable and prudent manner.

There are three last pieces to the puzzle. The court will look at three guidelines you must meet to use deadly force. Your use of force must be:

The court will examine whether your actions were logical, reasonable and necessary. Logical and reasonable are very similar in meaning. The meaning of words is very important. While you may fight your first battle on the street with firearms and ammunition, your next battle for survival will be in the courtroom. In the courtroom, we fight with words. 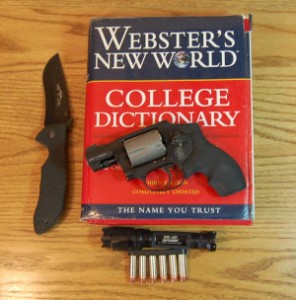 Tools for anyone prepared to defend themselves or their loved ones: a reliable gun, extra ammo, a good flashlight, a knife, and KNOWING THE RIGHT WORDS.

Years ago, I called this part of my training block “From the trigger to the typewriter.” As a police officer, I went straight from pulling the trigger to sitting down and typing the report that articulated why I did what I did.

Legally armed citizens need to think in the same manner. If you are involved in an armed encounter, you will go from pulling the trigger to almost immediately being asked to articulate what happened. That will probably include a written statement that may well decide your fate for years to come. You must be able to clearly explain that your actions were logical. You may decline to make a statement at the scene until you get an attorney, but eventually you will have to answer questions.

Let’s take another look at our scenario. In the park, Bruce was faced with serious physical harm when Jim charged at him with the knife. Most people would likely consider it logical that Bruce used deadly force in the park.

But how about the alternative scenario, where Bruce is in the house? Bruce has three choices. He can do nothing with the gun and call the police. He can shoot through the window or door. He can step outside and confront Jim.

Most people would likely think it logical for Bruce to stay inside and call the police. Shooting through the door does not make sense because Bruce is not in danger. Some people probably think Bruce should go outside and confront Jim. After all, Jim has brought a knife to a gunfight!

Jim could break in or ambush Bruce later. Maybe Bruce needs to take care of this here and now. How about the old tried and true, “Shoot him outside and drag him in!” That way maybe Bruce commits two felonies, murder and tampering with evidence. The police never figure that stuff out these days, right? 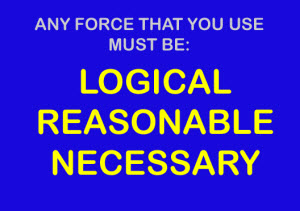 The last part that settles it all is the big word: NECESSARY.

“It was completely unavoidable, Your Honor. I had no choice. It really was him or me.”

This is why we don’t normally shoot someone for stealing property. Even though we may want to bust a cap in his behind, we know that human life is more important than possessions. That is why we hold our children so dear. That is why you and I would throw ourselves in front of an army of criminals to save our families. That is what separates us from the criminals.

Back in our scenario, Bruce used deadly force in the park because it was unavoidable. It really was him or the other guy. Bruce did not have another choice.

If Bruce does go outside, he violates that premise and becomes the aggressor. Bruce may end up in jail, or maybe Jim is just good or crazy enough to get him with the knife, and Bruce winds up dead.

Sometimes discretion is the better part of valor.

The bottom line is if you can avoid a fight, avoid a fight. If you have a gun, every confrontation you get in becomes an armed confrontation by the presence of your gun. And if you do carry a gun, be mentally prepared by knowing when you can legally use deadly force. Be physically prepared with proper equipment and good training. If you are forced into a fight, be sure that you go home to the ones you love.