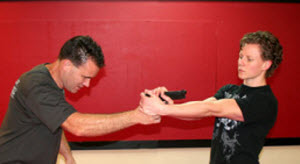 You might think that martial artists would be quite familiar with firearms, since martial artists practice and are very proficient with so many other weapons. But in my 28 years in martial arts, I have found the opposite to be true. Most martial arts and, therefore, martial artists do not use firearms in their training … at all.If we can spend hundreds of hours learning to defend with this …

I believe that there are two basic reasons for this. The first is that martial artists are studying arts that are hundreds if not thousands of years old. They pride themselves on the tradition and the fact that they are still doing it the same in 2011 as the Masters were doing eons ago. Most martial arts were developed by their founder to overcome a specific problem. There are martial arts designed for ancient soldiers who found themselves on a battlefield without a weapon, some developed for peasants to be able to use farm implements to overcome armored invaders on horseback, some to be used by royalty’s personal bodyguards to thwart assassination attempts, etc.

My thought has always been that if you are learning a martial art for competition, exercise, the peace it brings, or just because it’s cool, well … good for you. If you are learning something that hasn’t changed in a thousand years and think it’s modern-day self-defense for real-world violence, you are fooling yourself! In the past, I often wondered why, as a martial artist, I was putting hundreds of hours into learning to wield a farm implement when any punk with a handgun would defeat me! Think of the scene in Raiders of the Lost Ark where Indiana Jones nonchalantly pulls out his firearm and drops the sword-wielding expert with one shot. Funny … but probably closer to the truth than we realize.

I truly believe that if the ancient masters had had firearms, they would have forsaken all the farm implements as weapons training and spent their days at the range! If every martial artist who spends hundreds of hours with such weapons spent just a few hours learning to shoot, they would be much safer in the real world.

The second reason I believe martial artists are not proficient with firearms is the “Zen” of the martial arts. Most have codes that believe in fair fights, not doing more harm than necessary, not striking first, etc.

… why not spend a few hours learning to defend with this?

When I teach new instructors in Krav Maga, I give a lecture about real-world violence. One of the things I talk about is that we aren’t trying to instill a code of ethics, chivalry, honor or rules. If we have “honorable” rules like “never strike first,” “never inflict more harm than needed,” “always fight with honor,” and so forth, we are putting our practitioners behind the eight ball. If the scumbags don’t have rules, we are hampering ourselves if we do. If the bad guys use violence as a weapon, we need to perfect violence and be more ruthless than they are. If we are in a fair fight, our tactics suck!

When I hear talk about fighting right and with honor, I know that whoever is saying this has no concept of real-world violence and the kinds of human garbage that are out there preying on society. Here is a quote from a prison guard: “Having these criminals on the streets should make you scared, very scared. If we don’t have a means to defend ourselves from criminals, we are prey. I am not joking by any stretch by telling you these criminals are animals. There are still those bleeding hearts who believe in the integrity of man and the desire to do the right thing when presented with a choice. I have now seen firsthand that there are people who are bad, and they are unfixable. They will take the low road every time, they will lie, steal, rape, murder and feel wholeheartedly that they are entitled to do whatever they please without respect to anyone else.”

Yes, there are bad people out there whom the world would be better off without. Read about the scumbags who perpetrate home invasions. They are recidivists (hardened criminals who have been in prison for violent crimes and then let back out) who don’t look at you and your family as humans but as entertainment. They will rape, torture and slaughter your family and then go have a hamburger. What honor and rules should you use if faced with these people? I read recently of a human piece of garbage that sliced open a baby with a piece of tin and raped the wound. Just how much honor should we show him?

Cheating, cheap shots and not fighting fair are the only ways to survive a violent attack, especially when outnumbered or outgunned. One great historical example of this is The Battle of Stirling Bridge of the First War of Scottish Independence on 11 September 1297. William Wallace was vastly outnumbered, and the enemy had greatly superior armor and weaponry. How did his force win? They cheated and fought dirty!

At the time, fighting honorably and fair meant that armies would allow each other to set up before battle. They would wait as the other army crossed a bridge, etc. and got totally ready before the battle would begin. William Wallace’s army attacked the English while they were crossing a long and narrow bridge and wiped them out. There was no honor in this. It was cheating and fighting dirty. They lived while the enemy died.

The only way to face ruthless, violent people and come away alive is to be more ruthless and violent. Firearms are cheating … cheating is what the scumbags do … we must be better at cheating to survive. This is logical to me!

If we are taking it away, we need to know how to use it!

At my gym, I require anyone who plans on testing for black belt to attend the NRA’s gun safety course. We teach handgun disarms in Krav Maga, so I think that if you are taking a handgun from a criminal, you had better know how to use one. If you get the weapon from him and he can see that you don’t know how to use it, there’s nothing to stop him from continuing the attack. If he’s bigger, stronger, has a knife or other weapon on his person, we didn’t make ourselves safe by taking his handgun, we just changed the danger.

When I give seminars on handgun disarms, I bring a few actual handguns (we do the seminar with training weapons, of course) so that people can see the workings, how to clear jams, how to do a safety check, and more. It always amazes me that people attend the seminar and they’ve never in their lives touched a handgun — and they’re martial artists.

Even worse are people who are afraid of the handgun. I always ask them how they’re going to take one away from someone if they’re hesitant to even touch one in the seminar environment. When I teach self-defense for women courses, I often run into this. I explain that they have given the gun a magical ability it doesn’t have. If they’re terrified of the handgun, they’ve made the attacker superhuman and someone they will submit to.

Becoming safer by moving the dojo to the range.

I just heard that Rob Pincus and his Combat Focus Shooting team are now offering Martial Artists’ Firearms Training Courses that introduce practicing martial arts instructors to defensive firearms. What a great idea! Two programs are being offered: one for end-user knowledge and skill development, and another for those interested in teaching defensive firearms as part of existing self-defense programs. I highly recommend Rob Pincus’ course to all of my martial artist friends. I believe a few hours of training with firearms will make us safer than hundreds of hours training with chucks or kamas. For more information, check the training course offerings at the I.C.E. Training site.