Considering the recent active-shooter killings in Colorado and Wisconsin, these spontaneous/flash-type domestic “terrorism” incidents are a burgeoning personal protection problem. Though such an incident may not have occurred in your area, that doesn’t mean it can’t or won’t. Because of this, our personal and family awareness levels have to be elevated and congruent with the environments we live and work in and travel through. At home, behind locked doors with the alarm system armed, our awareness can be reduced as compared to when we are at the mall, a movie or commuting to work. There are a number of good personal and family awareness principles. Let’s review a few of the most important.

I first heard task fixation described by my friend and mentor Craig Douglas, aka “SouthNarc,” in 2005. Task fixation refers to narrowing our focus on one task, object or objective when in public places. Examples include speaking or texting on a cell phone or focusing too intently on securing a child into a car seat in a parking lot. 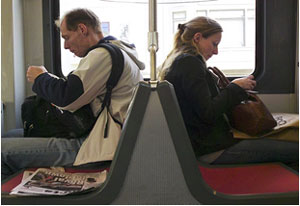 Avoid focusing on one task or object in public places.

Task fixation is a common problem and awareness killer, and we all do it from time to time as we get caught up in the minutiae of daily life. It’s not hard to become focused on a cell phone call, important email or text message, sacrificing awareness of our current environment. Perhaps the greatest aid to criminals today is the advent of the smart phone, which distracts users from readily available threat cues in potentially dangerous environments and situations.

Task fixation can also occur when involved in a bad situation such as an active killer incident or armed robbery. This happens when all attention is placed on just one subject, unknown contact or threat, forsaking all others and perhaps possible “sleepers” waiting to act upon those who respond.

Avoid task fixation in public places, limiting it to safe areas such as your home or a secure work environment.

Humans pick up on threats via a number of “threat indicators,” to include visual and auditory stimuli, furtive movement, and even olfactory stimuli (e.g., smell of alcohol or smoke). Of these, our most important sense is our visual acuity, or ability to see trouble coming as soon as possible. It’s no surprise that in the wild, animals that lose sight do not live very long. 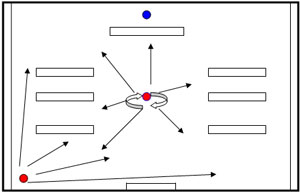 Which position is best to view the majority of your immediate environment?

Visual deprivation is when we, someone with us, or possibly someone else (e.g., a person in a vehicle) deprives us of good visual information in our environment. Examples include sticking our heads into a car too far to grab an object, walking too close to corners so we cannot visualize what’s around the corner until it’s too late, or standing too close to an object such as a rack of food supplies in a mini-mart. All of these deprive us of visual stimuli based on proximity to objects in our environment until possible danger is close. Even with firearms, dangerous people must close space in order to cause harm, thus our seeing them sooner rather than later is a survival skill.

One common self-induced visual deprivation is going directly up the center or to the counter when we approach and enter a room, convenience store or market. This limits our ability to visualize the entire room (as best we can) and gather information. It requires a 360-degree turn to see everyone and everything possible in that space.

Instead of this, visualize as much of the room or building interior as possible from outside prior to entering. When entering, turn left or right, running along an exterior wall to a corner. From this vantage point, the room can be viewed in its entirety without having to turn our backs on any one area of possible danger. The next time you enter a room or business, note where the security cameras are placed. This is often the best view of the majority of that space. Go there first, stand underneath, and look around.

Limit visual deprivation when in public places. Create “offset” from objects and people in the environment. Visualize a room or business from outside prior to entering.

When not in transit between locations, we essentially live and work in boxes. Rooms, theaters, and restaurants are mostly squares. Even outdoor spots like parks and concert venues roughly follow this design. It’s an easy way to keep people organized. Because of this, it’s important to understand where the safe areas in public spaces are. The periphery of rooms/structures/spaces usually allows the best visual perspective of that area. Readily accessible escape routes, e.g., windows and doors, are located on the periphery and, as explained above, corners closest to the door provide the best overall view of the majority of the space, especially entrances. Consider the most dangerous area to be in: is it in the center or around the periphery? The old cliché of putting your back to the wall makes sense. However, this principle needs to be followed and practiced in every environment, especially public spaces where crowds of people are present.

Maximize safety in public spaces by positioning yourself at the periphery of rooms, crowds and venues, and with the best view of common access points.

A decent portion of our time is spent in vehicles, transitioning from one location to another. This is of course relative to your lifestyle, job and family situation. The most vulnerable time in any vehicle is when stopped or parked. Vehicles are not safe zones. Comprised primarily of sheet metal, plastic and glass, they do not offer the level of protection some believe. Car jacking is often preceded by a window being broken and passengers being threatened or physically removed. Due to the confined space inside a vehicle, fighting off potential attacker/s inside the vehicle requires a specialized set of personal protection skills, not to mention what is required to protect passengers in the front and/or back seats.

A good defensive driving tactic is to maintain a reactionary gap from other vehicles. This tactic also provides time and necessary room to move if a potential problem approaches your vehicle on foot (e.g., in a road rage situation). Opportunities for escape, such as going around a stopped car or even jumping a curb, may be necessary in a pinch. Continually scan the rear view, driver’s side and passenger’s side mirrors for approaches from the sides or rear.

Remember, you are in public, so avoid task fixation when in your vehicle, such as checking your cell phone or adjusting the radio. If a situation does occur, don’t be afraid to debus the vehicle and use it as an obstacle between yourself and potential aggressors. Getting caught in the driver’s seat, seat belt on, while someone attempts to assault you is not a good position to be in. Mobility is a life-saving skill. Lastly, remember that a two-ton vehicle makes an excellent personal-protection tool. If threatened and use of force is justified, the vehicle itself can be a devastating weapon.

Maximize safety in vehicles by maintaining a reactionary gap from other vehicles and avoiding task fixation while driving or stopped. Continually scan and understand that being inside a vehicle does not mean you are safe.

Having great awareness skills doesn’t matter if you cannot communicate the presence of danger to the people (family and friends) you are with in a way that helps deal with the situation, not makes the situation worse. Those who study personal protection often do so individually, rarely involving a significant other or child in training or practice. This presents a potentially lethal problem if trouble occurs, since one member of the group or family unit is aware and prepared to react, but nobody else even has a clue what to do. Family planning and communication are required at home and in any public setting.

First, roles have to be defined. Who is the designated protector? Traditionally this role has fallen to men, but today, many women are trained and willing to assume this role. This decision is important because that individual often takes the lead and is in charge. Another important role, especially in family units, is that of gatherer. Once alerted to a problem, this person is responsible for gathering others, such as children or elderly family members, together to facilitate organized escape or defense. In situations where a single mom or dad is present, that parent may have to assume both roles.

Second, create a communication protocol based upon likely threats in your environment. Examples may include:

* “OUT”— get out of the vehicle or house

* “SAFE ROOM”— get to the designated safe room ASAP

Most importantly, have a verbal communication of danger plan in place and practiced with family members, just like a fire safety drill at school or home. Last, “play” scenarios with children in a way that they understand the reasons, but more importantly so they get practice doing so.

Having good awareness skills is one part of the readiness formula. Being willing to act, defend, or even aggress a potential threat to protect others is another part. Being prepared by planning for worst-case scenarios, training, practicing and studying completes the readiness formula. Consider implementing these outlined awareness principles into your personal protection profile, and you’ll be one step closer to being ready.