One area often overlooked by people new to defensive shooting is the importance of selecting proper defensive ammunition. We did a recent comparison of the effectiveness of defensive ammunition versus full metal jacket target ammunition so we could show our students the difference the bullet design makes. It is amazing to me to see people still rationalize that more power is the solution rather than utilizing the technology provided by today’s manufacturers.

This all started when I was doing some research into ammunition and watching videos to see what was out there. I had been carrying the same type of ammunition for a while and was getting ready to swap it out. I wanted to see if something else had come out that I might be interested in. There are a lot of videos on the subject, and many people film shooting ballistics gel. People had commented on these videos that they prefer to carry .45 ACP full metal jacket in their concealed handguns. These comments intrigued me.

I began to wonder why someone would prefer these rounds after seeing the tests, so I did my own research. In the late 1800s, the creation of smokeless gunpowder took over the firearms world. With the increase in power of this new smokeless powder, bullet design had to change as well, since the soft lead alloys used to make the bullets of the time did not hold up well to the increased velocity and pressures. The idea of coating the bullet with another metal that would keep it all together came around and solved the problem. Unfortunately it actually caused the problem of over-penetration as well.

Combined with the lower velocities, the soft lead alloys used in previous bullets would naturally expand somewhat when hitting a target rather than simply going straight through it. The new full metal jacket rounds did not expand at all and did minimal damage to the target. Hunters began complaining about the effectiveness of the new ammunition. Sure, it was more powerful, but it would simply go through a deer or other animal without causing an injury that would incapacitate it enough for a sure kill. In the Philippine-American War, our soldiers experienced this same problem with their .38-caliber pistols. Fighting against a determined Moro Warrior force, the .38-caliber rounds did not incapacitate the enemy, who continued to fight. A solution was needed.

Around this time, the British had been experimenting with ammunition after finding similar issues with their new battle rifle chambered in .303. The solution was the so-called “dumdum” round. This was basically what we would today call a jacketed soft point. The jacketing is removed from the tip of the bullet, exposing the soft lead core to allow for better expansion than that of a full metal jacket. The German government protested these rounds, stating that they were inhumane, and in 1899 The Hague Convention outlawed expanding ammunition in international warfare. Although the United States was not a member of The Hague Convention, we complied with this rule.

Shortly thereafter, in 1904, the U.S. began seeking a new pistol to issue to the cavalry. With the issues we had experienced with smaller bullets, it was specified that the minimum caliber was to be .45. John Browning fulfilled this request with the design of the .45 ACP cartridge and later the M1911 pistol. Both of these were genius designs for that time and solved the issues at hand. The .45 ACP offered the power needed, with a heavier, slower-moving bullet that did not over-penetrate and had a much greater effect on the target. The round was in compliance with The Hague Convention, and both the round and the pistol served the military well for 75 years.

Fast forward to the modern day and the rules of warfare have not changed. Expanding ammunition is still outlawed in warfare, and full metal jacket rounds are in use. In the private sector and law enforcement community, much has changed. The technology in bullet design has grown by leaps and bounds. We have specialized ammunition for many hunting applications and for self-defense.

First we must look at the ammunition being the right tool for the job. If involved in a self-defense situation where the use of deadly force is needed to protect us from grave bodily injury or death, we want to be able to stop the threat as efficiently as possible. Modern defensive ammunition gives us the best chance of this. The incapacitating effect that these rounds have is amplified many times over. 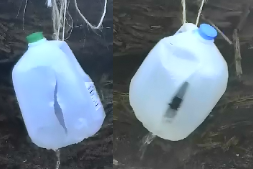 We recently completed a simple test, firing a .45 ACP full metal jacket and a .22 WMR Speer Gold Dot self-defense round into one-gallon water jugs. Showing people video of this, we even told them it was a demonstration of the power difference between 9mm and .45 ACP. We then asked them to pick out which round was .45 ACP and which 9mm. All were surprised to find they had selected the .22 WMR as being the .45 ACP. This began a great discussion in class on the importance of the bullet design versus raw power. To give you one statistic, the .22 WMR is rated by the manufacturer to have 99 ft-lbs of energy at the muzzle, as compared to 352 ft-lbs for the .45 ACP.

The result of this is that a person can carry a slightly less powerful handgun and have it be a viable self-defense weapon. Many people cannot handle the recoil of a .45 ACP, and some who say they can have been practicing in target-shooting scenarios, not defensive-style shooting. Even if they can manage the recoil in a semi-efficient manner, they still cannot fire as quickly and effectively as they can a 9mm or similar caliber. Many people think a .45 ACP is a huge increase in power versus the 9mm round. Again I believe this comes from the mindset of not being able to use defensive ammunition. Many in the military hated the idea of switching from the 1911 to the Beretta 92 in 1986. They claimed the 9mm was not effective enough. And in part they were right. A 9mm full metal jacket has the same problems that were experienced with our ancestors’ .38-caliber pistols during the Philippine-American War. The smaller, faster-moving projectile goes through the target with “minimal” damage and less chance of incapacitating.

Although I can agree with this in that context, it does not apply to civilian self-defense. A 9mm defensive round will actually outperform the .45 ACP full metal jacket. Beyond that in the civilian and law enforcement worlds, getting to fire those shots more quickly while still maintaining the level of precision needed to get effective hits gets you out of danger sooner. And that’s our goal.

I have heard many instructors claim the reason we carry defensive ammunition is that it is “safer.” This is a great statement to try to make the subject more politically correct. The thought is that defensive ammunition does not over-penetrate and therefore will not exit and hit an innocent person. I personally do not like this thought process, as it creates a false sense that it is ok not to assure a proper backstop in the middle of a defensive encounter. Even quality defensive ammunition can fail to expand, negating this argument. But I will say that the combination of being able to lower recoil but still have an effective round can aid in safety by allowing the average student to maintain accuracy better while firing rapidly. Remember that regardless of how well a bullet is designed, it will not stop until it hits something or someone that makes it stop.

Typical example of a feed issue caused by defensive ammunition with the 1911. Photo: author

After my research and testing, I have come to the conclusion there is one main reason people were commenting that they prefer full metal jacket over defensive ammunition. They fall into the “it’s always been that way” crowd.

Many of these people are 1911 fanatics whose minds may never change. The fact is that, for their time, John Browning’s designs were genius. But the two-piece feed ramp of the 1911 does not handle hollow point ammunition well. It was not designed for that. Many people will never change their mind, regardless of what they read here (if they have even read this far). They will not allow themselves to believe there is any room for improving on the “perfection” that is the 1911 or the .45 ACP cartridge. I do have to mention that, ironically, Browning himself died at a workbench working on a 9mm cartridge. As innovative as he was, I believe he would be embracing modern designs and even working on new designs to improve them.

Regardless of what caliber or design you choose in a firearm, take the time to consider the ammunition you carry in it. Buy extra ammunition and test fire it. Put it through a small torture test to be sure it functions properly in your firearm. Your life may count on that ammunition someday, and ending the threat as soon as possible can make the difference.