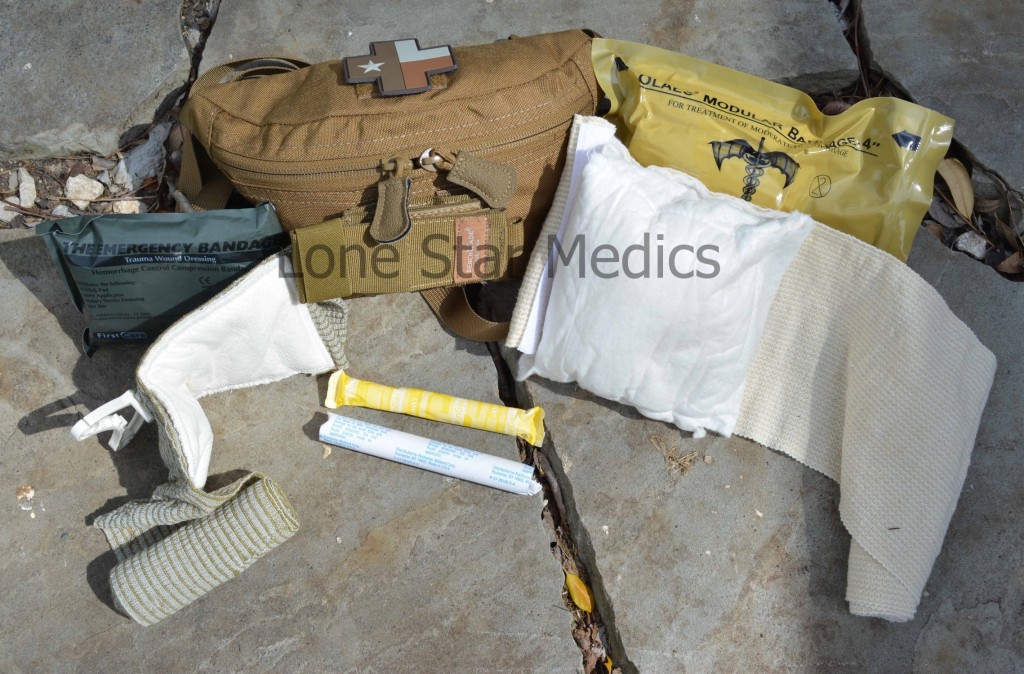 LSM Type II IFAK with a couple of great options and one bad option for controlling major bleeding. Plan to win, not just to improvise. Photo: author

Back in my days with the 212 M.A.S.H., a doctor named G. Scott, M.D. once asked me this seemingly simple question … but if you knew him, you knew he expected a very detailed answer. “Pvt. Causey, is medicine a science?” I replied, “Of course it is, sir!” Dr. Scott responded with, “No, it is not. Medicine is an art. And some artists’ art is better than others’.” That has stuck with me since I was a 19-year-old cherry medic, and it is still true today. For example, people honestly think tampons, maxi-pads, and other similar feminine hygiene products are acceptable tools to control moderate to severe bleeding. They especially think that for gunshot wounds (GSW). Well, I’ve had enough of this inaccurate information being spread! In this article, I’ll explain why using feminine hygiene products is a bad idea when trying to treat serious bleeding. 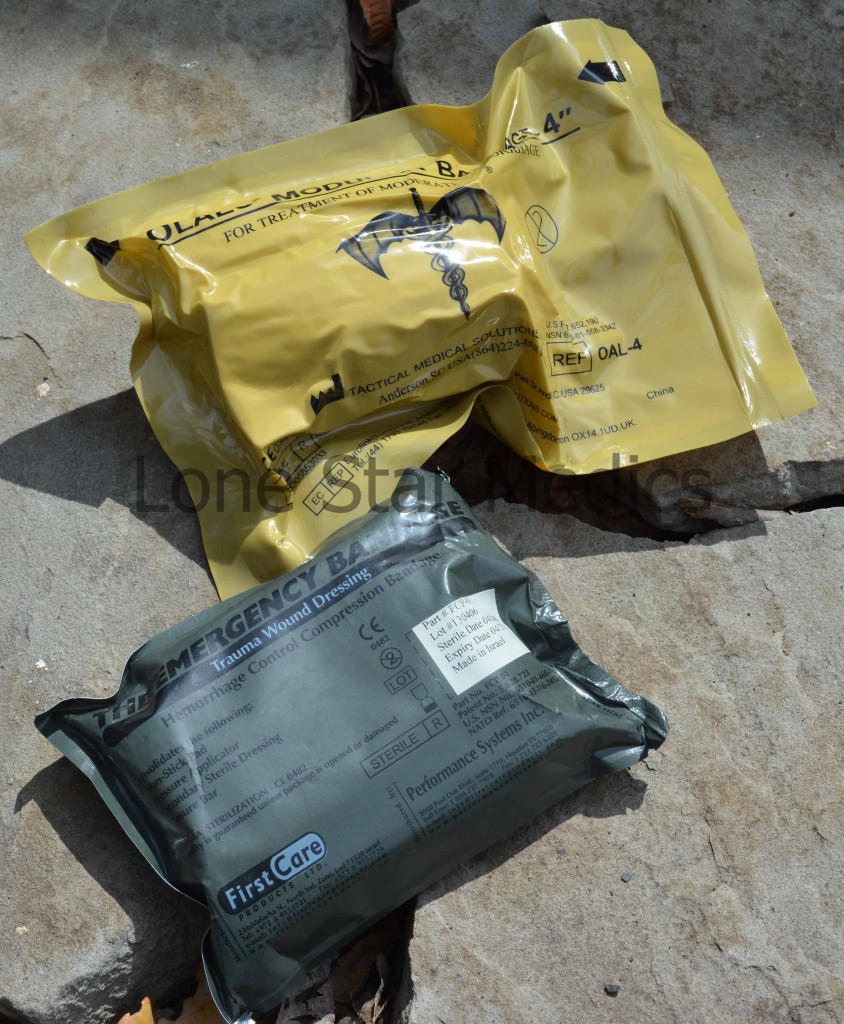 Top: one of author’s favorites, Olaes Modular Bandage from Tactical Medical Solutions in four-inch version. Bottom: four-inch wide Israeli bandage. Note how they are packaged and able to be stored in a range bag, not just on a shelf in a hospital closet. Photo: author

The word “improvised” gets thrown around in the field/tactical medical industry more than I want to acknowledge. Yes, in the field and in a clinical setting, we healthcare professionals do on occasion have to improvise a little in order to make things work regarding patient care and treatment. When I was a combat medic, improvisation was not only encouraged, but we also were tested on it several times throughout our training at Ft. Sam Houston. One thing we learned as new medics in the Army was that if we can’t get more than three uses out of one object/item/device/piece of equipment, we didn’t carry it. A handful of tongue depressors were not used just for looking down someone’s throat. They were also finger splints, a windlass for a tourniquet, puppets for keeping kids occupied during transport, and you could even use them to help organize your M5 Aid Bag. A bomb tech once showed me a cool trick using a tongue depressor broken in half to make part of a trip fuse. My point is that sometimes we may have to use a little ingenuity to save a life or two. But that doesn’t mean we should be trying to re-invent the wheel!

Viewing both bandages opened, it’s easy to see that these dressings are designed specifically to control moderate to severe bleeding in the field.
Photo: author

With over 12 years of combat in two different parts of the world, there have been several advances in medicine, especially when it comes to controlling/stopping moderate to severe bleeding in a field-like setting. A few stories have also been told of troops using feminine hygiene products as improvised bandages to stop bleeding from GSWs or Improvised Explosive Devices (IEDs). On some occasions, those products worked. Other times they did not. I firmly believe that “if it’s a stupid idea, but works … it ain’t stupid.” So I’ll give credit where it’s due. Good job to those who made it work.

But for the record — blood-letting was a good idea back in the day too. Just because something worked once doesn’t mean it will work again. We’ve got over 12 years of “well, that didn’t work — let’s try something else” to learn from. The technology that has developed far superior products now available to healthcare providers and the layperson alike is unprecedented today.

In regard to choosing a product that controls major bleeding, plenty of bandages have evolved from the old few rolls of Kurlex gauze and a six-inch ACE wrap, to what is now considered an actual “pressure bandage/dressing.” Companies like Tactical Medical Solutions, QuikClot, Celox, H&H, SAM Medical and others have produced some of the most advanced, effective, and efficient bandages and dressings for the treatment of penetrating traumatic injuries in the field and tactical medical industry. Yet for some reason, people still feel the need to treat patients like they are living in some bad Mad Max remake. The pressure dressings designed by the companies I just mentioned are specifically designed for moderate to severe arterial bleeding and packaged for austere environments. 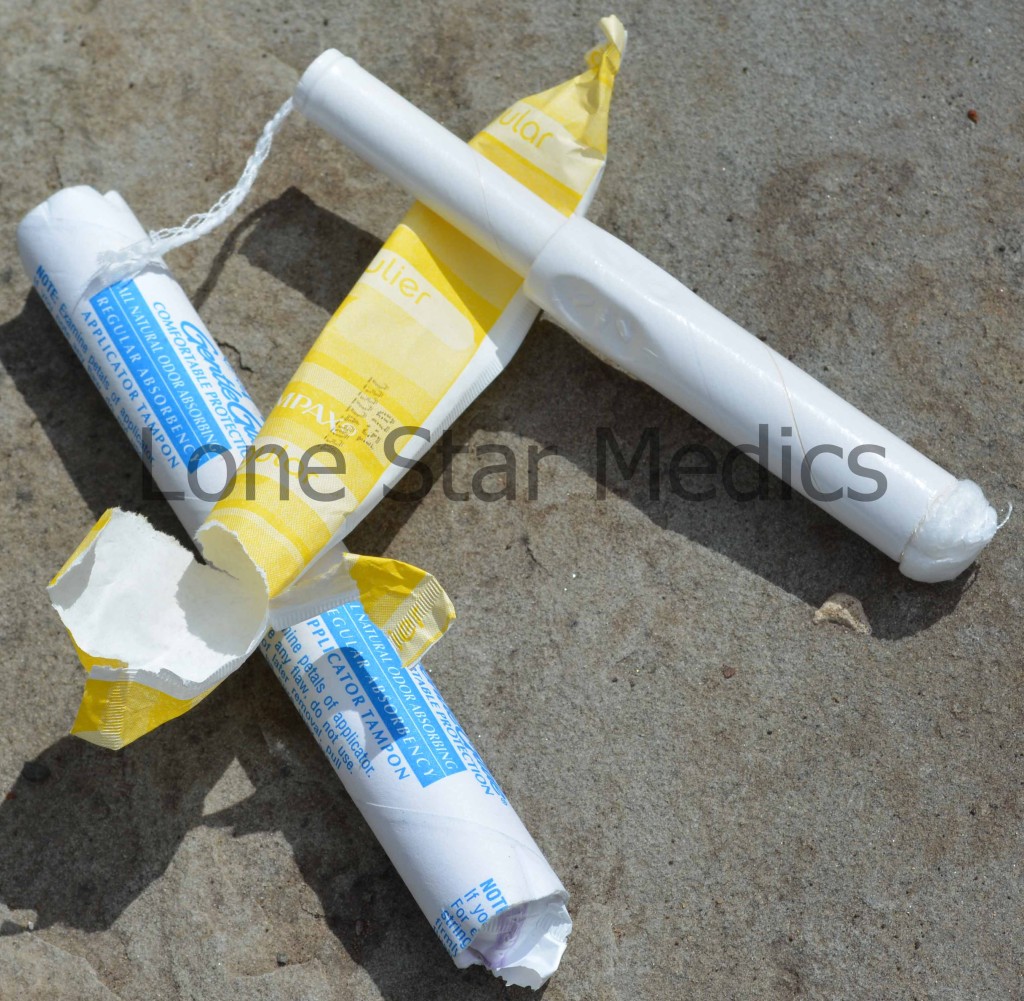 What Is a Tampon Designed For?

A tampon is designed to be inserted into the vagina of a female human being in order to absorb menstrual fluids, which are discharged over the course of a few days. The discharged fluid is made up of about 40-50% actual blood, and then several other types of tissues, such as uterus lining, broken-down unfertilized eggs, some hormones, and maybe even small amounts of vaginal secretions. This fluid is not pressurized like arterial blood is throughout the body. Nor are these menstrual fluids needed to sustain life to other organs of the human body, for example the brain. 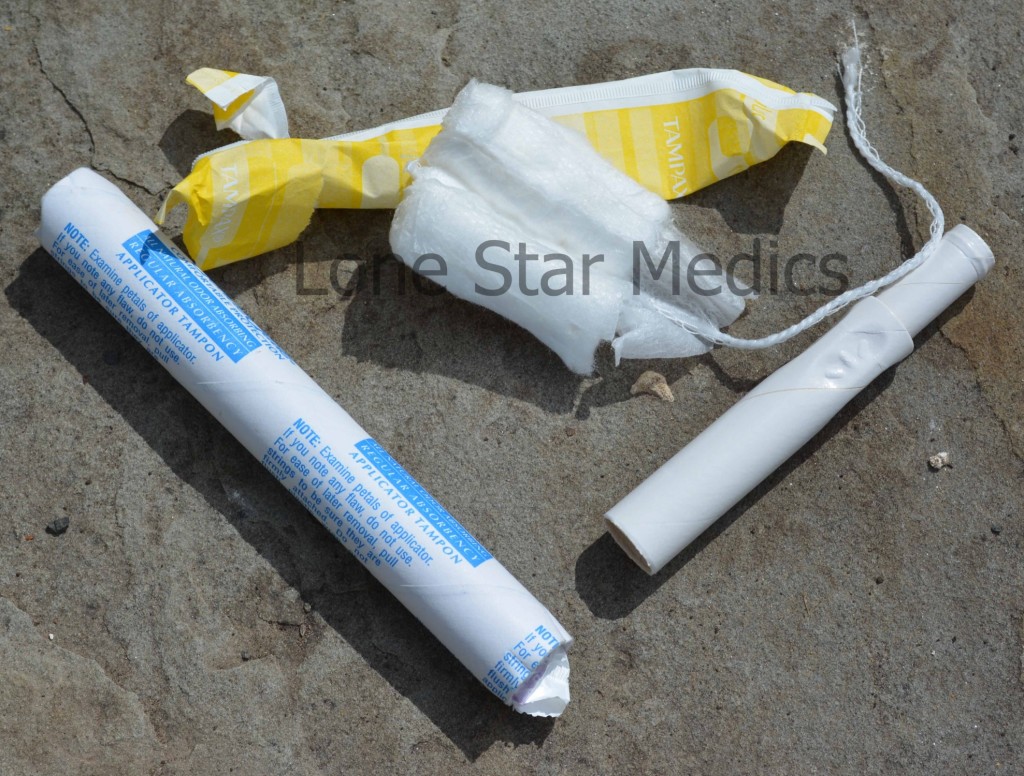 During a high-stress event, trying to open, deploy, and apply such a small “tool” with limited fine-motor-skills may prove difficult. You have to open the package three times before you can even use it. Photo: author

Just look at how a tampon or pad is packaged – it’s not really stored for use in the field. Usually they are individually packaged in a thin plastic wrapper. The dimensions of these products vary with each manufacturer. Some come in plastic or cardboard applicators that can be confusing even for a grown woman who has years of experience with different makes and models, let alone a grown man trying to plug bullet holes with them while in a stressful environment like a gunfight. Tampons are not sterilized when they leave the manufacturer, and there really is not a need for them to be. Clean and free from debris, yes — but not sterilized. 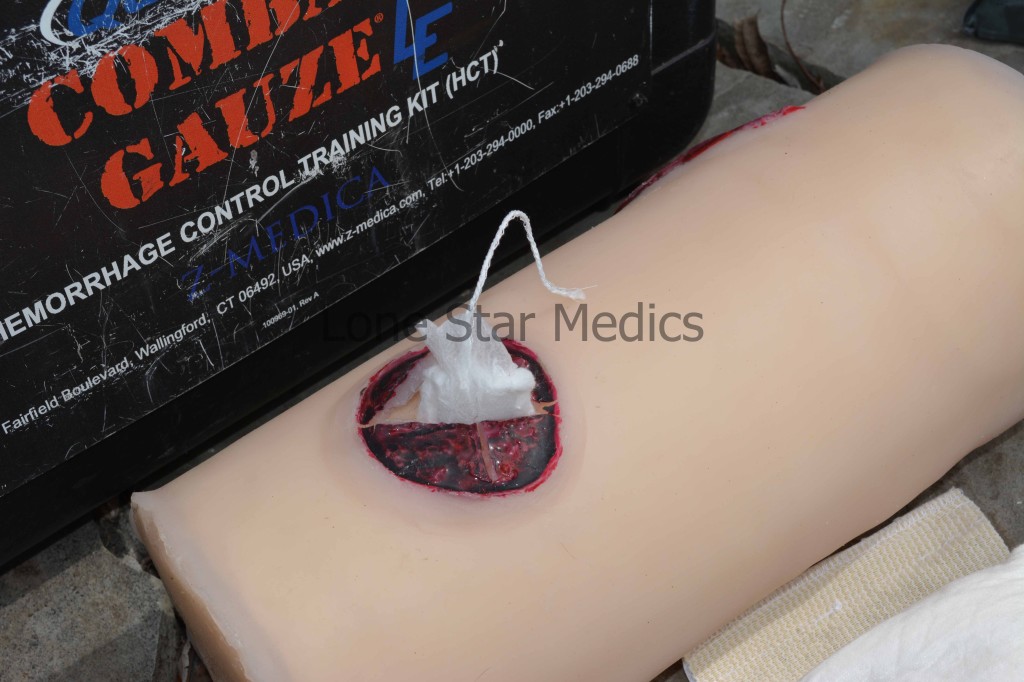 When using a wound packing simulator from QuikClot; it is obvious that a tampon doesn’t come close to filling a ballistic wound cavity.
Photo: author

Bleeding from a Gunshot Wound

Now let’s talk about the type of bleeding one might come across from a single gunshot wound. Arterial blood is made up of oxygen-rich pressurized blood that transports minerals, vitamins, nutrients, and all sorts of other good stuff the body and its organs need in order to function. The brain requires several of these things in order to keep the rest of the body alive. This is why we assess and treat injuries in the order of Circulation, Airway, Breathing (CAB). But that’s another article for another time. The point is that we have to control the bleeding first, in order to ensure blood circulation. That way the brain can continue working and keep the rest of the body going — which is what we’re after here.

Modern-day pressure dressings are in fact designed to treat penetrating traumatic injuries related to austere or combat environments. They are designed from the ground up to control moderate to severe bleeding, including pressurized arterial bleeding. Pressure dressings like the Olaes from Tactical Medical Solutions are packaged for field-like environments. Most manufacturers use gamma irradiation to sterilize their pressure dressings. Yes, we fight for life now and treat infection later. But consider that in order to properly control bleeding from some injuries, you may have to pack a wound with that bandage in the field. 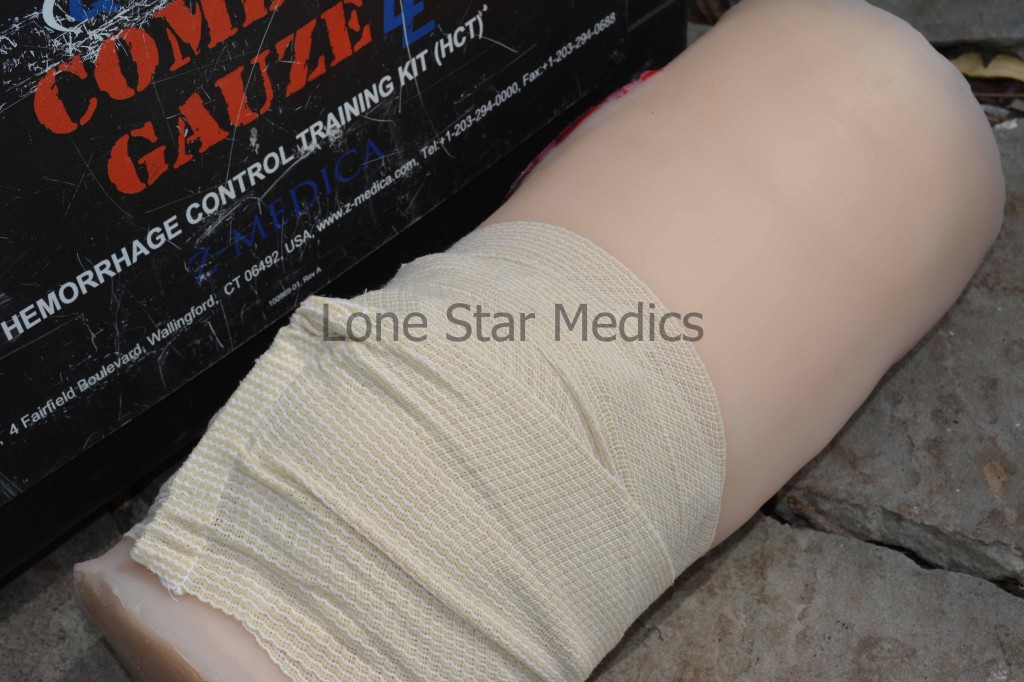 Olaes Modular Bandage has additional bulk gauze inside it. You can use it to pack the wound and then wrap it up tight, as shown here. Wrapping the entire dressing ensures that the bandage is being used to its fullest potential. Photo: author

Normally that’s not a big deal if you’re in a city. But when you find yourself up in the mountains or out in the country where hospitals are more than a few days’ hike, I’ll take every opportunity I can get to help keep infection at bay. (Read: broad-spectrum antibiotics are our friends but not always around the corner when we need them.) Ask yourself: “Do I want to prepare for just gunshot wounds or do I want to prepare for as many different penetrating traumatic injuries as possible with this bandage?” Most of us will come across more lacerations from car wrecks than we will from bullets. Though, if you’re one of those types who’s humping it over the Hindu Kush mountain range, then sure, you might be more concerned with bullets and shrapnel than a Prius driver back here at home. Just sayin’! 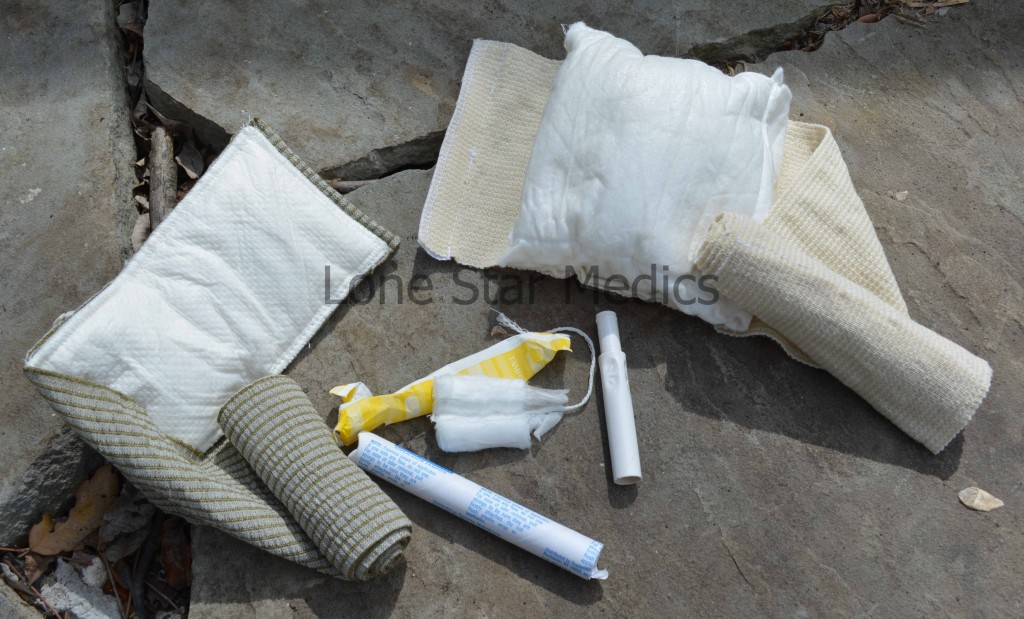 Which of these three products do you want to use to save your life or your loved one’s life? Photo: author

Not to mention the size difference between a real pressure dressing and a tampon. I’m not going to get into the anatomy of a ballistic wound cavity. But let me say that a single tampon is not my “go-to” bandage for wound packing in a three-dimensional cavity that is bleeding profusely in the middle of the night, on the side of a busy highway, in the freezing rain, immediately following an attempted car-jacking/murder where a gunfight broke out and now my loved one is sprawled on the pavement bleeding out of the middle of their right thigh and left armpit. But hey, I guess some folks like to “plan to improvise” during such a tragic event.

If cost is a concern, it shouldn’t be. You can buy two Olaes bandages for under $15, and two Israeli bandages for under $10. These aren’t going to break anyone’s bank account. They do come with expiration dates, but some last up to four years. For maximum shelf life, store the bandages in a med kit where the outer wrapping won’t be compromised.

Do yourself and your loved ones a favor: buy a real pressure dressing and take a class on how to use it effectively and efficiently. If you’re going to be carrying one or the other as part of your EDC kit, don’t plan to improvise … plan to win!

62 Responses to “Tampons: For Drama, Not Trauma!”