The difference in where the weight begins on the double action only (left) and the striker-fire action pistol(right). The trigger must also be moved to this position in order to fire another round. Photos: author

Being a defensive firearms training instructor who sees many students at their first formal training means I see many students who have made the mistake of purchasing a “defensive handgun” prior to having the knowledge needed to make an educated buying decision. Many of these students have chosen what a friend or the guy at the gun counter told them without knowing any of the details of what makes a good defensive handgun.

Many instructors recommend double-action-only revolvers, double-action-only semi-automatics, and striker-fired semi-automatics as I do. All these action types have the main characteristics desired in a defensive pistol. They can safely be carried without the need for a manually operated mechanical safety. This means that in the middle of a violent attack, you do not need to use any fine motor skills to manipulate the safety. They are all simple to operate. When you press the trigger, they fire and if you don’t press the trigger, they will not fire. Although all these action types offer this simplicity, I lean more toward striker-fired semi-automatics over the double-action-only variety for many beginning students for multiple reasons.

Striker-fired semi-automatics were made popular in the 1980s by Glock. Although the company was not well received in the beginning, it has become one of the most popular defensive pistol brands in the world. The striker firing mechanism uses a spring-loaded firing pin that works more like the launcher in a pinball machine than that of a traditional pistol with a hammer. This spring-loaded pin is partially cocked by the movement of the slide. The trigger then cocks the pin the remainder of the way and releases it to strike the primer and ignite the cartridge. Why does this make a difference to the beginning defensive shooting student?

Striker fire action from a Smith & Wesson M&P. The striker is partially cocked by the movement of the slide, then finished and released by pressing the trigger. Photo: author

The term trigger control refers to the technique of activating the trigger while minimizing movement, which causes more deviation. During target shooting this is done by slowly and deliberately pressing the trigger rearward in a smooth motion. This should result in a “surprise break,” meaning that the shooter does not know precisely when the gun is going to fire.

In a defensive encounter, our goal is to end the situation as quickly as possible so we can get ourselves out of danger sooner. We do not have time for this slow, deliberate trigger squeeze. We also are “lucky” in that we do not usually need a target-shooting level of precision in the middle of a defensive situation. Accurate defensive shots are normally defined as approximately a 9-inch group or an 8.5 x 11-inch sheet of paper. This level of precision is much different than that of target shooting, where the goal is to fire all the shots through the same hole. Since we do not require that level of precision, we can speed up our rate of fire and maintain the precision we need.

Why does this affect the decision between these two action types? The amount of force or weight of the trigger pull in many of these firearms is very similar, in about the six- to seven-pound range. But the duration or length of that weight is far greater on the double action only. Imagine you need to move an 80-pound bag of concrete from point A to point B. If point A is five feet away from point B, it is going to be much easier than if point A is 20 feet away. Similarly, completing a rudimentary test of a Ruger LC9 (double action only) to determine where the weight begins on the trigger, it took moving the trigger approximately ½ inch to activate the trigger. By comparison, an M&P 9 (striker-fired) took approximately 1/8 inch, after the weight began, to activate the trigger. You need to utilize more trigger control on the double action only, since the length of the trigger pull tends to amplify the deviation caused by lack of trigger control.

For the basic student, this can result in deviation that causes shots to land outside the defensive accurate zone. I have even had students who claimed to be “experienced” miss the target completely until slowing to a near target shooting pace to get their hits. Some students with weaker hands or arthritis were unable to squeeze the trigger far enough to activate it at all. 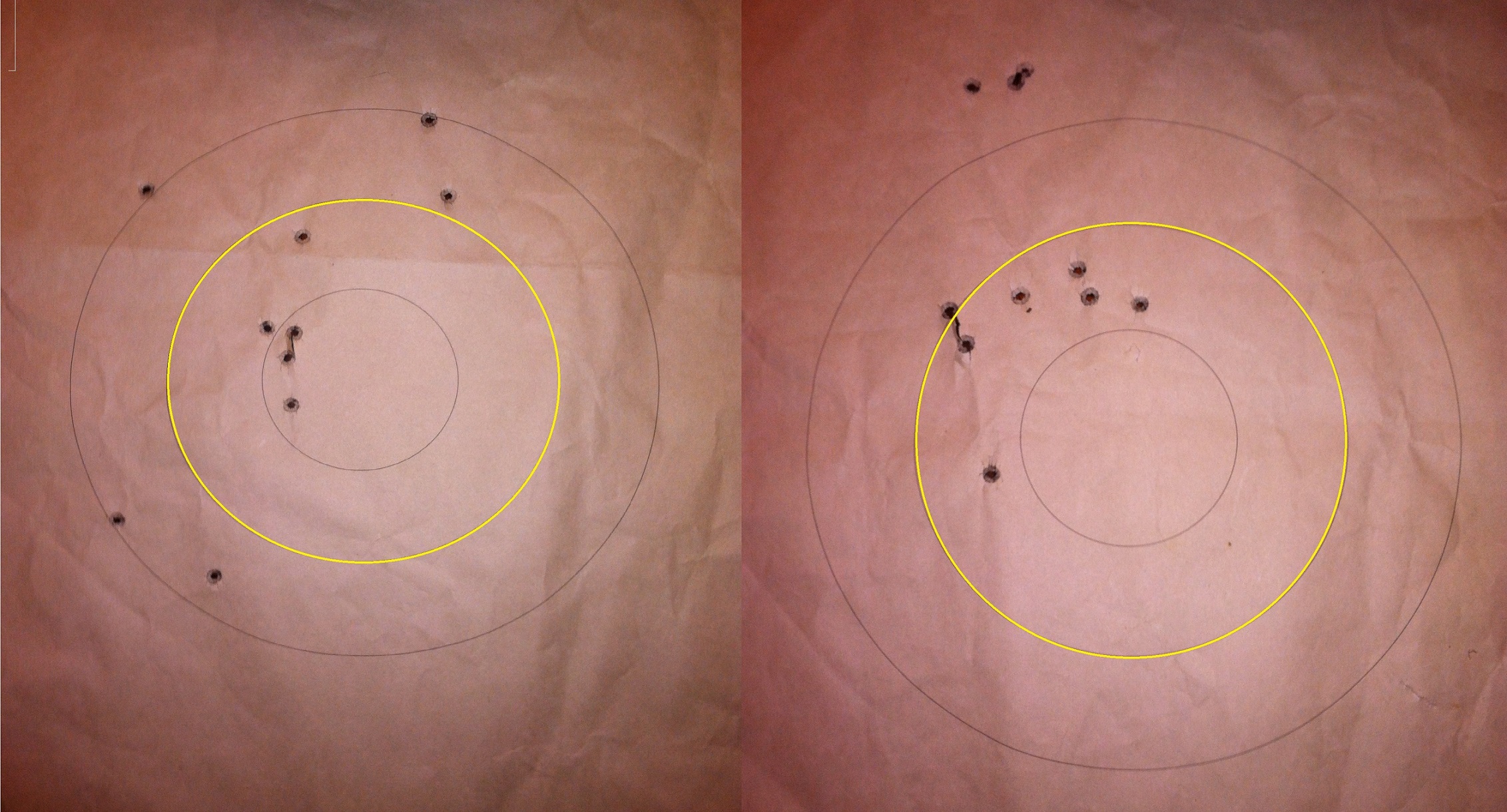 These two targets were shot by a beginning student. Yellow ring indicates established accuracy zone. On the left is the target fired at with the double action only. The striker gun is on the right. Photo: author

I recently tested this with a few students in a defensive class. I had each student fire 10 rounds from both guns from approximately 10 feet in defensive-style drills. The testing fell right where I thought it would. The students had much better success staying in the defensive accurate zone with the striker-fired pistol than the double action only. The first student had never done a defensive drill prior to this. He hit in the “accurate” area five out of 10 with the double action only and seven out of 10 with the striker gun.

We also used a shot timer, and this same student fired two shot pairs in 1.173 seconds on average with the double action only compared to an average of .952 second with the striker-fired. He actually fired approximately 18.8% faster while still improving the amount of hits in the accurate area. This student is very representative of the average beginning defensive pistol student in my experience. I have had many students with double-action-only pistols and I’ve had them switch to a striker-fire action and seen an instant improvement in their results.

Another issue I have seen with beginning students with double-action-only pistols is failing to allow the gun to reset. Reset on a defensive pistol is a term commonly used to describe how far the trigger needs to go back toward its at-rest position after a shot has been fired to enable it to fire another shot.

Similar to the length the trigger must be pulled to fire the shot, this distance is much greater on double-action-only style pistols than on striker-fired. Again with our two test pistols completing a very rudimentary test (from the trigger pressed all the way back to reset), the LC9 came in at approximately 5/8 inch movement compared to the M&P at slightly less than ¼ inch. 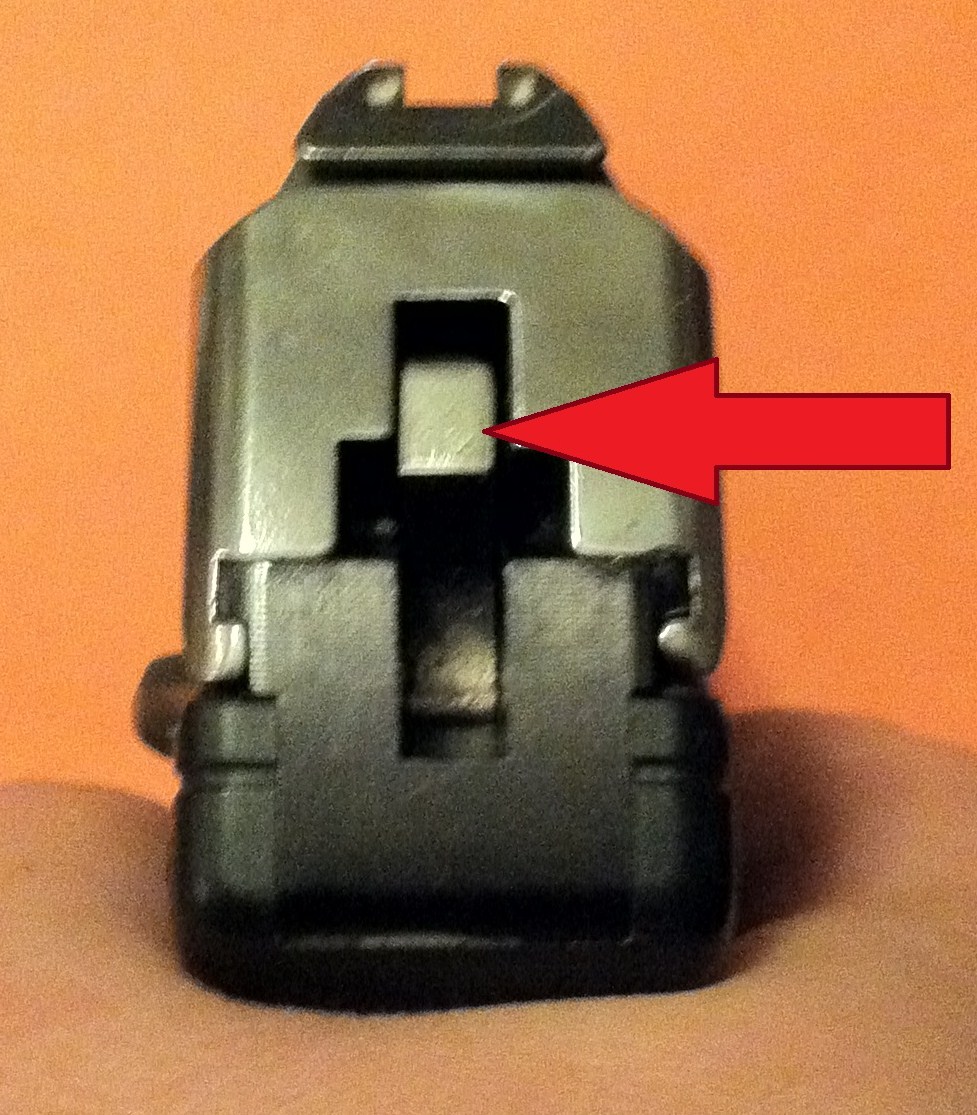 Hammer on back of Ruger LC9. Hammer is not exposed to be manually cocked and is not affected by the movement of the slide. Pressing the trigger does all the work. Photo: author

This lengthy reset in the double action only can result in what is known as “short stroking” the trigger. If the trigger finger does not allow the trigger to go all the way to reset when firing a string of shots, it causes the gun not to fire when the trigger is pressed for the next shot.

I have seen this happen to beginning students in the middle of a drill. They assume there is a malfunction, only to eject a live round. The worst-case scenario is the beginner not knowing this and having to learn it in the middle of an attack. Again this affects our balance of speed and precision in defensive shooting. More movement means more time needed to fire the shots accurately.

Although both the double-action-only and striker-fired pistols are recommended action types for concealed handguns, the ease of firing the striker-fired cannot be matched by the double action only. It takes much more time to master the ability to fire the double-action-only pistol, and this should play a part in your selection process. There is no reason to make things more complicated, especially if you’re starting out.

Students who struggle tend to practice and train less when not seeing positive results. You should select every piece of equipment to give you every possible advantage. Training is meant to better your abilities. Improving those abilities should not be overshadowed by making up for the shortcomings of your equipment. In almost every basic class, a student who is having trouble with their gun says it will “take practice.” My suggestion is to purchase a different gun. Even if you take the extra time to become proficient with the double action only, you would most likely be even better with the striker-fired.

Here is a list of striker-fired pistols that you can consider as suitable options — but you should still dry fire the gun prior to purchasing to be sure it is right for you.

Be careful when selecting a defensive firearm. Make sure it is something you are capable of firing with the level of precision needed. Striker-fired triggers vary greatly by make and model. As an educated consumer, you should check them prior to purchasing a defensive pistol. Buying the handgun that feels best to you will give you more incentive to train and practice with it. This will help you become proficient faster, making you better prepared for a defensive encounter.

175 Responses to “Advantages of Striker-Fired Pistols”