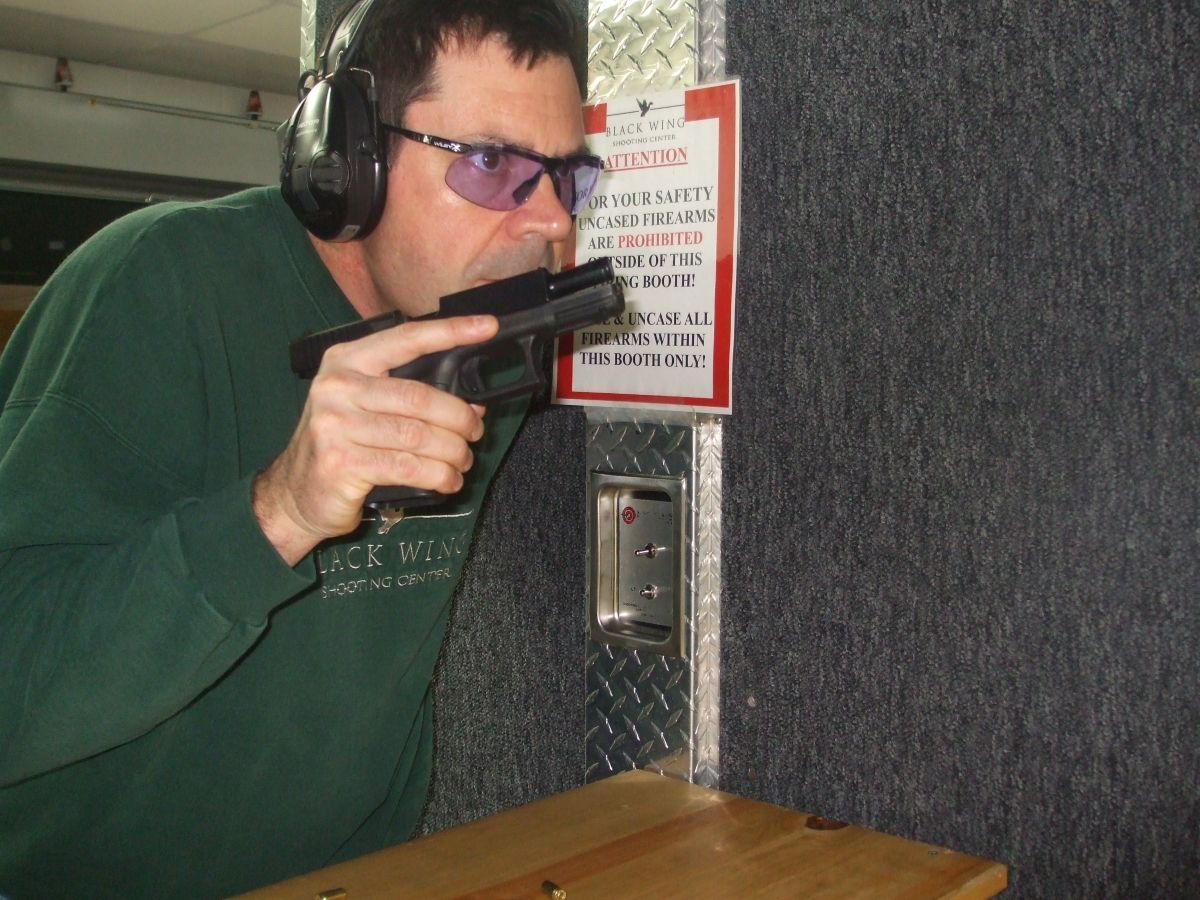 While we may indulge in gear shopping as we would any other interest, don’t lose sight of the fact that personal defense can be a matter of life or death. Photo: author

Members of and regular visitors to the Personal Defense Network (and if you’re visiting, why not join?) tend to be folks who take their personal protection seriously. And although our interest in the means, methods and merchandise of lawful defense can be a topic of life-or-death gravity, we often indulge in it the same way we would explore any other special interest we might have, be it whitewater rafting, model trains, or collecting jazz records: we find something we like and we stick with it. Most of us are guilty of ignoring something different or new, allowing our bias to keep us on that same old comfortable path. There’s nothing wrong with this, really. After all, if I prefer Lionel “O” gauge boxcars and Ella Fitzgerald on the Verve label, what’s the harm?

The harm comes when we remember that personal defense is not like collecting stamps. Our personal defense choices truly can mean the difference between life and death, so it’s important on occasion to take a fresh look at what we’re doing and what we’re doing it with. And if, through circumstance or vocation, we’re called upon to advise others, it is critical to take up this journey on an ongoing basis. Even if you are a person who finds change easier said than done … namely me.

Like many of you, I’ve made some pretty good choices, resulting in a small armada of home and carry guns. And certainly I’m not the only one who has acquired a fleet of concealed-carry holsters and related gizmos, most of which have found their way into the “not-quite-what-I-had-in-mind” box buried in the back of the spare bedroom closet.

I was way overdue for a fresh look at my carry gear. And here is what I discovered as I first tried an option I had previously never considered and then revisited one that hadn’t worked out as well as I had hoped the first time around. 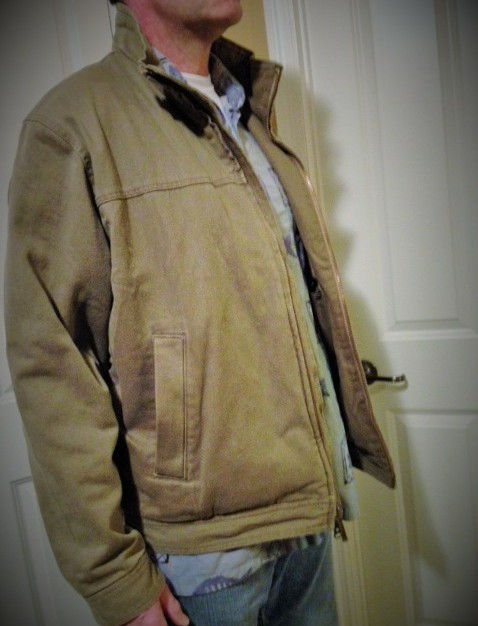 I had heard of this item but never considered buying one. Basically, it’s a coat built for the purpose of carrying a defensive handgun without need of a separate holster. Because cold weather descended upon Ohio earlier than usual this winter, when I noticed a very attractive offer online, it resulted in the arrival on my doorstep of a Woolrich Elite Series “Operator” Jacket.

Despite the name, one of the best features of this particular piece of kit is its unassuming, “non-operator-ish” appearance. As you likely know, it is quite common to see people in the LE/military/self-defense communities these days sporting lightweight jackets, cut trim and made of high-tech synthetics that wick moisture and repel the elements. These jackets are usually festooned with pockets and enough Velcro panels to affix an entire library of “morale patches.” While I won’t deny the advantages of modern outerwear design or anyone’s right to display a “DTOM” or “Molon Labe” patch, it does stand out among the non-tactical community at large. 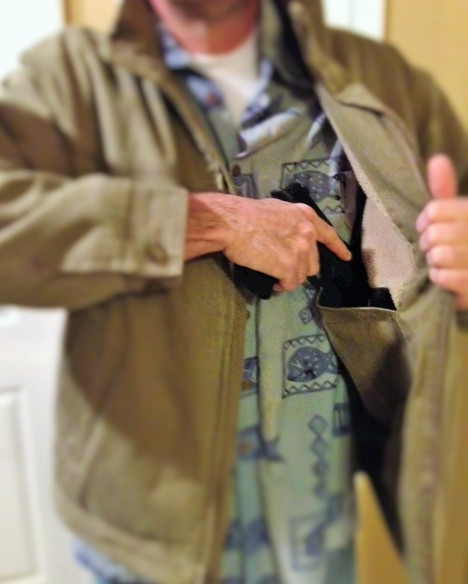 Not so this jacket. It is so ordinary-looking as to beggar description, a definite plus for an item designed to enhance concealment. Its most important features, of course, are the two ambidextrous internal holster pockets. These are lined with sturdy nylon and utilize a heavy elastic loop capable of supporting the weight and covering the trigger guard of nearly any handgun imaginable. The pocket suspends the gun butt-forward at a roughly 45-degree angle, about halfway between that offered by a vertical and a horizontal shoulder holster, so the opposite-side hand can reach in and readily find a proper grip.

How does it work? Better than I would have guessed. The jacket easily carries any gun I tried, everything from a little Beretta Nano to a five-inch barreled Smith & Wesson M&P Pro. I even wandered around with an all-steel full-sized 1911 … with a light rail, no less … and the jacket held it securely and without looking like I had a brick in my pocket. And therein is the downside: the jacket never looked like I was carrying a brick, but in my mind it sure felt like it! After several weeks of wearing the jacket in a multitude of public environments and carrying a platoon of different pistols and revolvers, I must report that the biggest downside I encountered was a completely unreasonable suspicion that the gun would somehow squirt out of its elastic cocoon and go clattering across the pavement! Not once did I experience anything like this, but years of having a gun tucked in close have made me a little uncomfortable with anything different. However, I have no evidence that the gun was going to become dislodged while I was wearing the jacket. 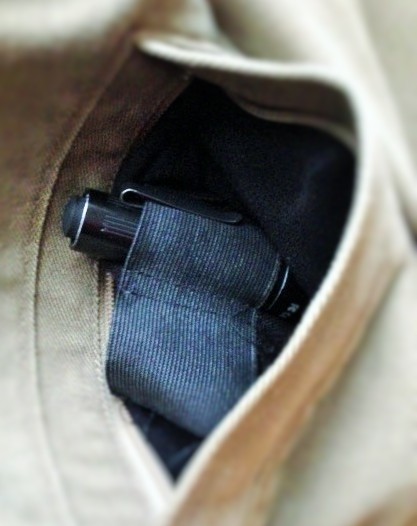 Elastic loops in exterior hand-warmer pockets are great for securing gear such as spare magazines or this SureFire flashlight. Photo: author

Presentation from the jacket was easy enough, if a bit clumsier than I’m used to. The interior holster pockets are held closed by a narrow hook-and-loop tab, but by design this is easily overcome — simply reach straight through it. In fact, the only real obstacle to a rapid presentation appears to be a wintry cold wind: having the jacket zipped up will slow down the draw considerably.

Bottom line? I am going to keep and continue to use my concealed-carry jacket, recognizing that it may fit into a relatively narrow set of circumstances, such as when it is warm enough that an unzipped jacket appears normal. This item may be just the ticket if one desires a medium-to-large gun in a shoulder holster position but may need to remove their overcoat in public.

Next up, I spent some time with a “holster tee shirt.” The concept is a snug, form-fitting undershirt that has an elastic holster sewn onto it, again in the basic shoulder holster position. Simply pull it on, add gun and voila – instant concealment under virtually any shirt! I liked this idea from the moment I first heard of it and was eager to give it a try. My results were less spectacular than I had hoped, but I’m glad I took a second look, because I learned that using such an item successfully depends on the details. For this reason, let’s compare the one that worked and the one that didn’t, starting with the latter.

I encountered this item at a gun show, on a table belonging to a fellow hawking a variety of nondescript black nylon tactical gear. Since the brand name (if indeed there was one) escapes me and there was no label on the shirt, let’s just call it “Gun Show Joe.” The shirt was black, with a high crew-neck collar, short sleeves, and a narrow waist. It was available in two sizes, small and large. I opted for the large. Under each arm was a “holster” pocket made of a doubled-over piece of heavy-duty elastic cloth. Although I didn’t notice it at the time, these pockets were attached just below the sleeves. The garment itself was constructed of a material I had assumed was a generic version of that used to make bicycle pants. It had an oddly abrasive texture that compels me to describe it as “Brand X Spandex.”

In use, several shortcomings became abundantly apparent: the sturdy, textured material was uncomfortable against the skin, leading me to put a regular undershirt on under the holster shirt. Unsurprisingly, this was equally uncomfortable. The elastic holsters had sharp, heat-sealed edges (to prevent fraying) that scratched, rubbed and became otherwise very distracting. And the worst part was that the height of the holster pockets caused any gun I tried to be literally shoved up into my armpits. I don’t know if this was worse for me or the gun! Anyway, these deficiencies are why I tossed the shirt (and my regard for it as a carry option) into the nearest dumpster. 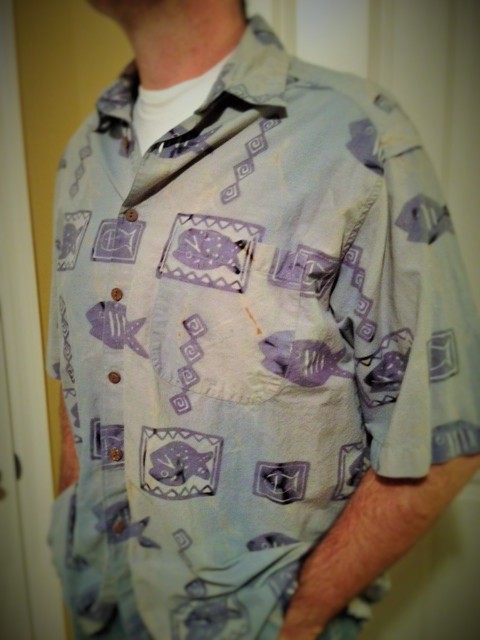 Fast-forward about a decade and along comes an opportunity to try it again. This time, it’s a holster shirt made and sold by 5.11 Tactical, a name likely familiar to those in the shooting and tactical communities. My guess is that the 5.11 folks heard from people who’d had about as much fun as I did with the good idea but bad execution of the holster shirt concept. Since 5.11 caters widely to the law enforcement market, they recognized that things like body armor and risky undercover jobs could make good use of a well-designed holster shirt. The result is a huge improvement: thinner, more breathable material, closed-edge seams throughout, and a layer of padding that allows the gun to press close without discomfort. Also, the weight of the handgun is carried by the shoulders, because the suspension straps are sewn right in. The “Gun Show Joe” shirt was like a holster hot-glued to a shirt. The 5.11 product is like an entire soft-side shoulder rig sewn into a shirt.

How does it work? Assuming you find the idea acceptable in the first place, it really is quite good. Besides the aforementioned LE applications, users may have a physical impairment or simple back problems that preclude a service-type handgun around the waist. Professional drivers and office staffers sit for extended periods, making a reach across the upper body a more efficient way to get to a handgun in the moment of need. 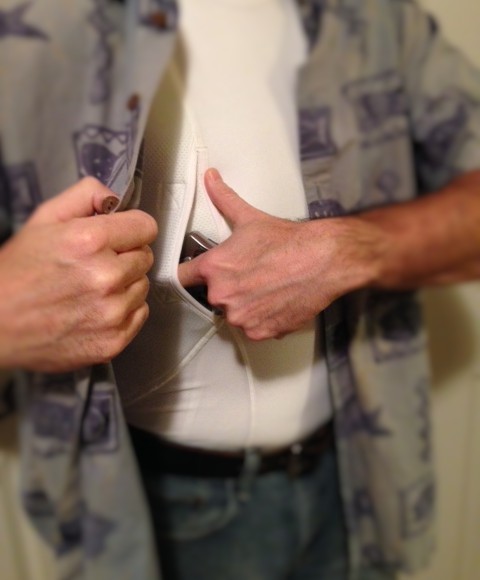 In terms of body mechanics, presentation from the 5.11 shirt is identical to that of the jacket. The big differences are that the gun is always quite snug when wearing the shirt (plus) but getting under, through or around the covering garment adds complexity and time to the draw (minus to big minus, depending on circumstances).

I will not argue that holsters built into clothing are the optimal solution for concealed carry. They are best used by those who already have some experience carrying concealed. They are awkward and slow when compared to most conventional belt holsters. But they’re likely faster, smoother and safer than carrying off-body in a purse or day planner. The most important consideration is this: comfort and convenience are subjective, but being armed is not. You either have it with you or you don’t.

And in the real world, people leave their defensive tools behind because of discomfort and inconvenience. So while the concealed-carry jacket or compression holster shirt are hardly my first choices for everyday carry, they do present viable options.