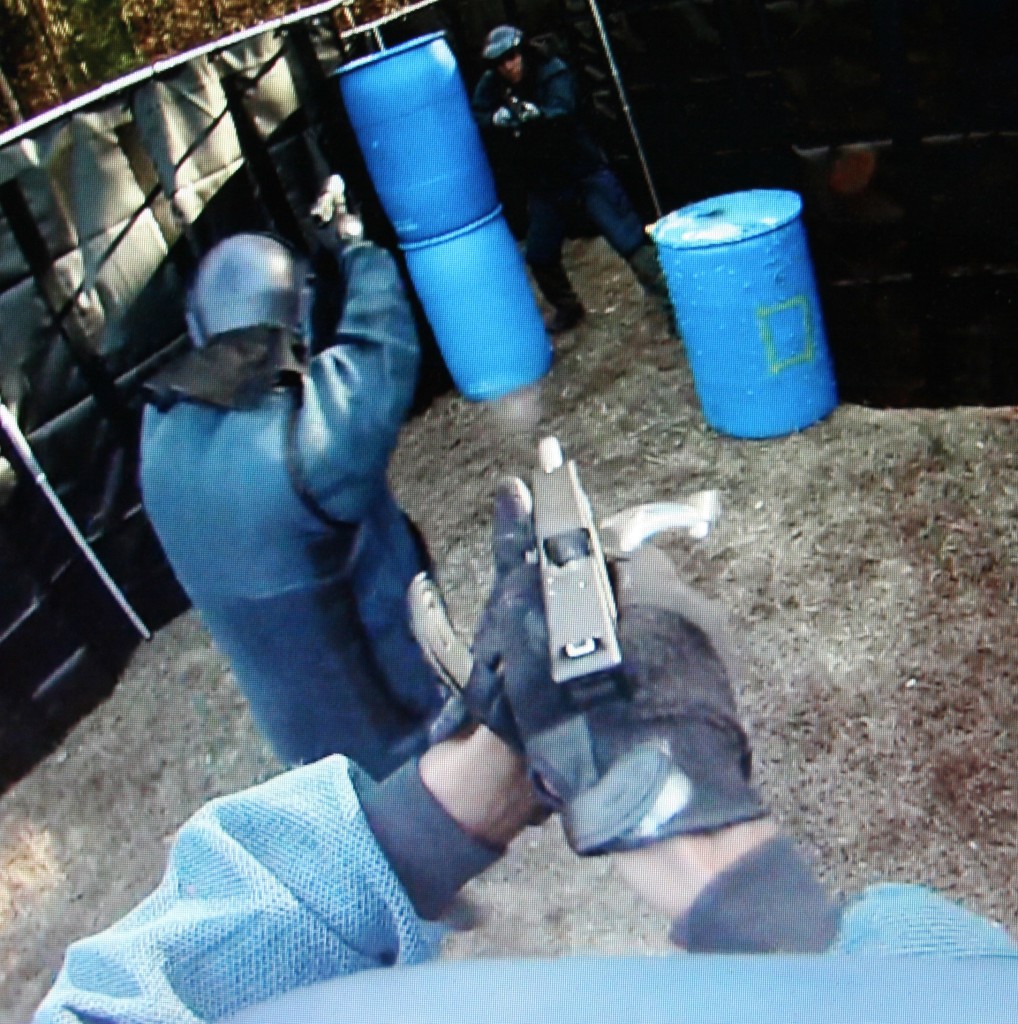 Not from ABC News. Author conducted his own experiment and details the results here.
Photo: author

I recently came across a video produced by ABC News a couple of years ago. This video documented what they called a “controlled study” and claimed conclusively that “concealed carry permit holders are fooling themselves if they think they will be able to react effectively to armed aggressors. Most CCW holders won’t even be able to un-holster their gun. They will more likely be killed themselves or kill innocent bystanders than stop the aggressor.”

Needless to say, the only thing about the study that was controlled was the outcome. Without going into too much detail, the news crew gave a brief class on handguns to a few students whom they claimed had experience ranging from “never handling a gun” to “hundreds of hours” of weapon handling experience. Then they picked a student with no weapon experience outside of playing Airsoft and set him up to fail in a recreation of a shooting in a lecture hall at a college in Pennsylvania. Aside from the absurdly obvious anti-gun nature of the experiment, it did inspire me to write this article on an armed civilian’s role in dealing with armed aggressors in public.

First of all, it’s important to note that while there are civilians carrying concealed weapons with little or no training or practice in the deployment of said weapons, it is my experience that individuals who regularly arm themselves do train and practice as much, if not more than, the average law enforcement officer. An FBI study conducted in 2007, Violent Encounters: A study of felonious assaults on our nation’s law enforcement officers, noted that of the officers in the study, the average was 14 hours of weapons training per year. I can say with certainty that there are plenty of departments and officers who do far less than that. In contrast, over 80% of the offenders studied had 28 practice sessions per year.

An anchor point is an area that requires someone to meet certain criteria to gain entrance. Photo: author

The internal dynamics of deadly force encounters caused by stress, fear, and adrenaline will be similar regardless of venue. However, the external dynamics of deadly force encounters in public areas are starkly different from those that occur in private settings such as one’s home. What I mean more specifically is that in public areas, the chaos resulting from a deadly force situation, whether actual or perceived, can be magnified geometrically by the number of people involved.

Your home is what we call an anchor point. An anchor point is a place where one must meet some pre-existing requirement to gain access, such as ownership, membership, employment, etc. Anchor points by nature typically are less populated and the environment is familiar to those inside. Because of the restricted access, the individuals in that area are often familiar to one another as well.

Habitual areas like this shopping mall are open to the public with virtually no restrictions. Photos: author

Conversely, a habitual area is one where anyone can come and go without restriction. Because of their nature, habitual areas are subject to attacks by all types of individuals. Whether it is a terrorist seeking mass casualties, a gunman wanting to make a public statement, or even a stalker whose only way of approaching his target is when they are in the open, deadly force encounters in the presence of multiple people present specific and complicated dangers for the armed civilian.

To identify the role of the armed civilian in a public deadly force emergency, we have to look at the difference in the societal roles of that civilian versus the role of an identifiable (uniformed) law enforcement official. The latter subscribes to what we call a “priority of life” protocol. The law enforcement priority of life protocol places the highest value on the lives of innocent civilians, victims, and hostages. Next in line comes the life of the officer, and last is the life of the perpetrator. It is the duty of the officer to put his life second to those of the people he serves. The officer’s uniform also clearly identifies him and his role to the public.

The priority of life protocol for the armed civilian is monolithic. The only concern should be self-defense. Included in that is the defense of your significant others in your immediate vicinity. While law enforcement is sometimes tasked with going on the offense – moving toward the threat – the armed civilian should (in most cases) be moving out of harm’s way and using deadly force only when necessary for personal defense. This task may prove difficult in public because panicked crowds tend to exhibit “herd” behavior.

Herd behavior stems in part from things called mirror neurons. Mirror neurons are the part of our brain that makes us smile when people smile at us, or makes us yawn when we see (or even hear) someone yawning. Mirror neurons help us learn by aiding in the replication of actions that we see. On a subconscious level, in addition to the mirroring of actions, the mirroring of emotions, beliefs and intentions associated with those actions can also occur. For example, when a person smiles at us, the mirror neurons cause us to smile back and can in the same manner create an emotional state that would typically accompany a smile. In the same manner, mirror neurons can account for the rapid spread of mental states throughout entire groups of people.

Aside from helping us learn, mirror neurons help us survive. When one bird in a flock flies off in a panic, it is usually only an instant before the rest follow. If one or two sheep, cattle, or horses get spooked, they can create panic in the entire group. Only one or two members of the group may have actually seen or perceived a particular threat, but the others, seeing the fear and its associated actions, mirror that emotion, causing it to spread rapidly through the group. From an evolutionary survival perspective, it is not necessary for every zebra in the herd to see the lion and make a rational, conscious decision to flee. One zebra sees the lion and, within seconds, the entire herd is fleeing based on that one zebra’s decision.

This causes some very distinct problems for the armed civilian. The first is target identification and recognition. Either caught up in the herd movement or watching it from a close perimeter, identifying the target can be very difficult. Even if you can identify it, being able to engage the target in a rapidly moving, dynamic situation can be nearly impossible.

In any deadly force encounter, we know that we hyper-focus on the threat. This means we focus on the threat to the extent that we block out much of the rest of the environment. Just as it takes a measurable amount of time to pull a trigger, it also takes a measurable amount of time to stop pulling the trigger in the event that something or someone steps into our line of sight. In the chaos of a crowd, you may think you have your sights on the target, but just as you pull the trigger, someone may step in front of you. 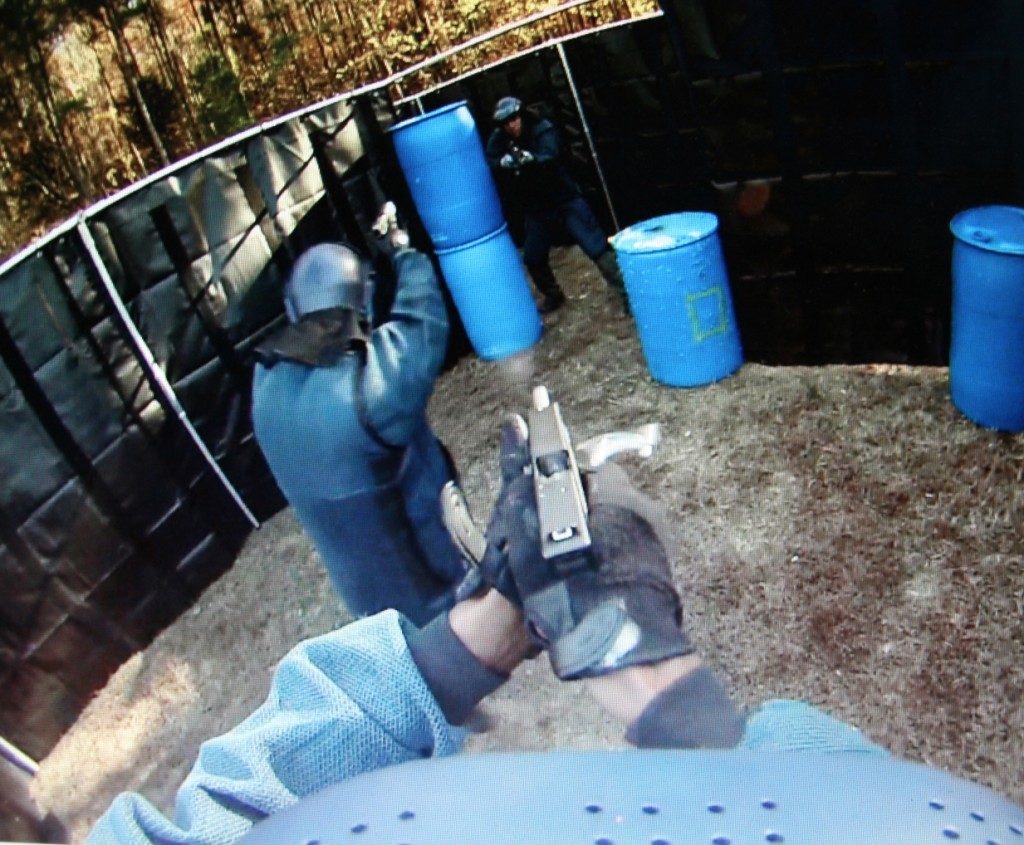 Not long ago, I put this theory to the test in a controlled experiment using law enforcement officers whose training and experience ran the gamut from fresh out of the academy to years on a SWAT team. Using non-lethal ammunition in a force-on-force exercise, we had two students enter a room under the guise of searching for a wanted suspect. (I chose a confined area to maintain control of the experiment.) The first student was an actor in the exercise, while the second was unaware of what was about to happen.

The students would spread out upon entering the room. A role player in an adjacent room would emerge and begin firing at the second student while the first student crossed between the student and the role player. Roughly half the students shot their fellow student in the back. A large number reported they were so focused on the threat that they never saw the other student until after they had pulled the trigger. Several noted that they recognized their fellow student was moving across their line of fire but they could not stop their trigger finger fast enough (or move the muzzle) to avoid shooting the innocent in the back.

The other major problem facing the armed civilian in public is that he or she may be mistaken for the bad guy. An officer responding to a chaotic scene sees you with a gun in your hand. Before you know it, he shoots you, thinking you’re the bad guy. This has happened multiple times in the past. Not only armed civilians, but even off-duty or plainclothes police officers have been mistakenly shot by responding uniformed officers who thought they were perpetrators. Another armed civilian may see you and mistake you for the bad guy as well.

As an armed civilian, I do not want anyone to know I have a weapon until it is time to use it. My intention is that the first notifications a bad guy will have that I am armed are a loud noise and a flash.

In closing, as a citizen exercising your right to carry a weapon for self-defense, you must maintain a constant vigil to keep your skills sharp. Understand your role and make certain that if circumstances require, you are able to assume that role and become a solution rather than a problem.