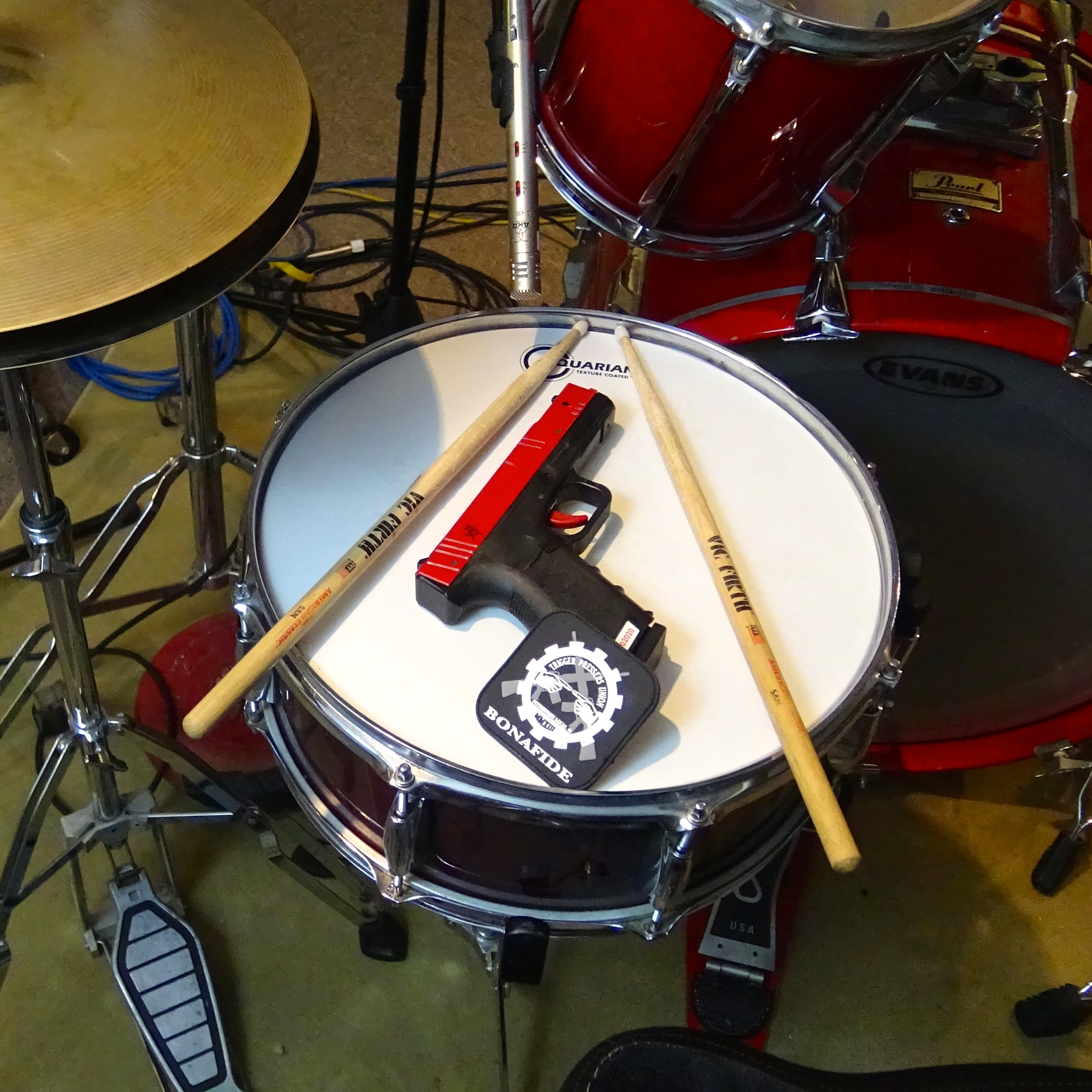 The only thing cooler than a drummer is a drummer who’s also a shooter! Photo: Jen Macro

What does drumming have to do with defensive use of a pistol? That is a good question, and on its surface, the answer is perhaps nothing. However, I made a connection one day while playing drums in the studio. I acknowledged the muscle power in my drumstick grip, and why. This realization in turn helped me to recognize the biomechanical lock and bone support in my shooting grip and what it does for my ability to apply skill in context.

First, let’s cover the two-handed thumbs-forward grip. The following are my instructions for over 90% of my students using a semi-auto pistol. 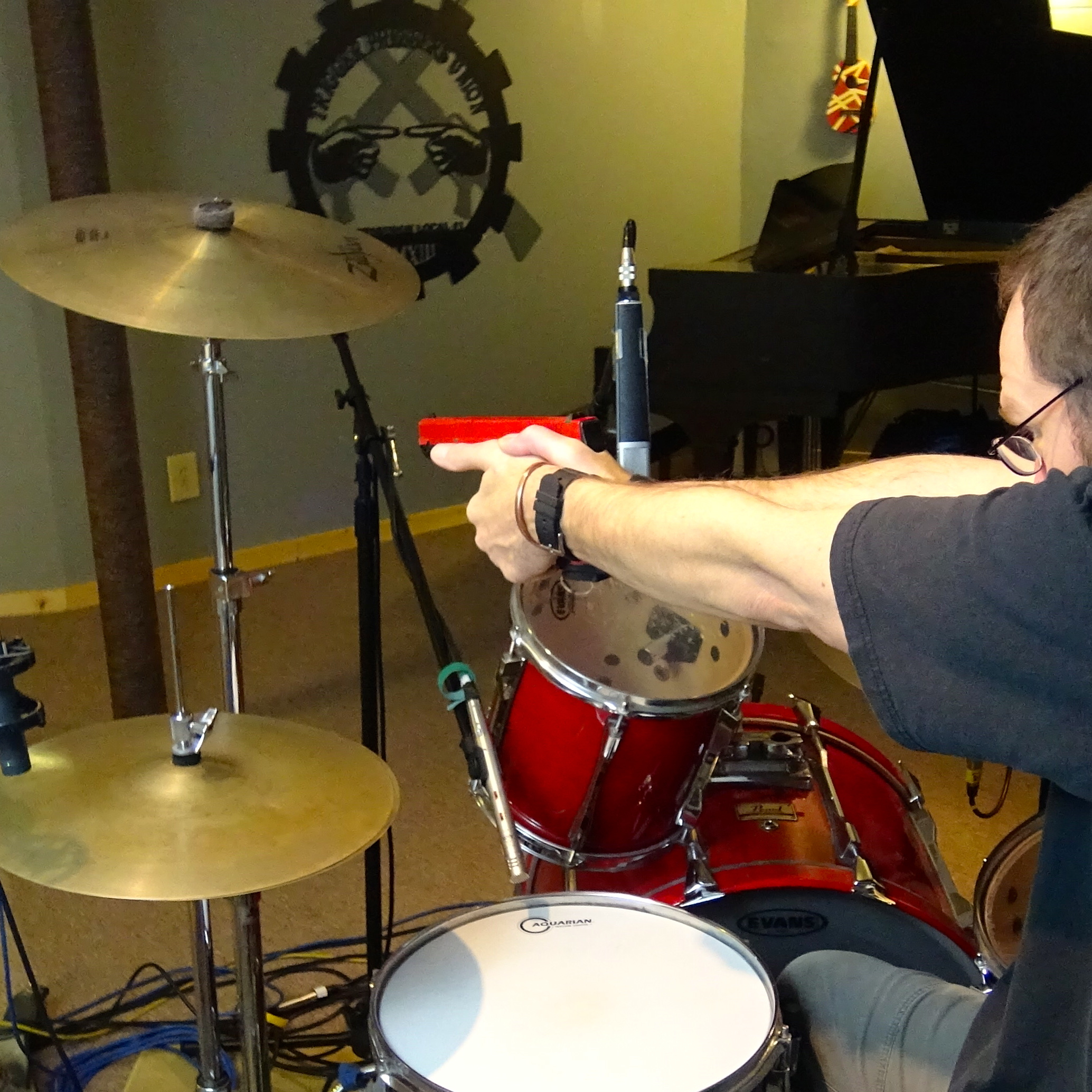 This two-handed grip encompasses the gun with as much tactile interface as possible. When the gun is in the extended shooting position, the “hinge point” of the overlapping fingers helps the strong and support hands clamp the gun into the grip.

SNAP THE WRIST FOR MAXIMUM BACKBEAT 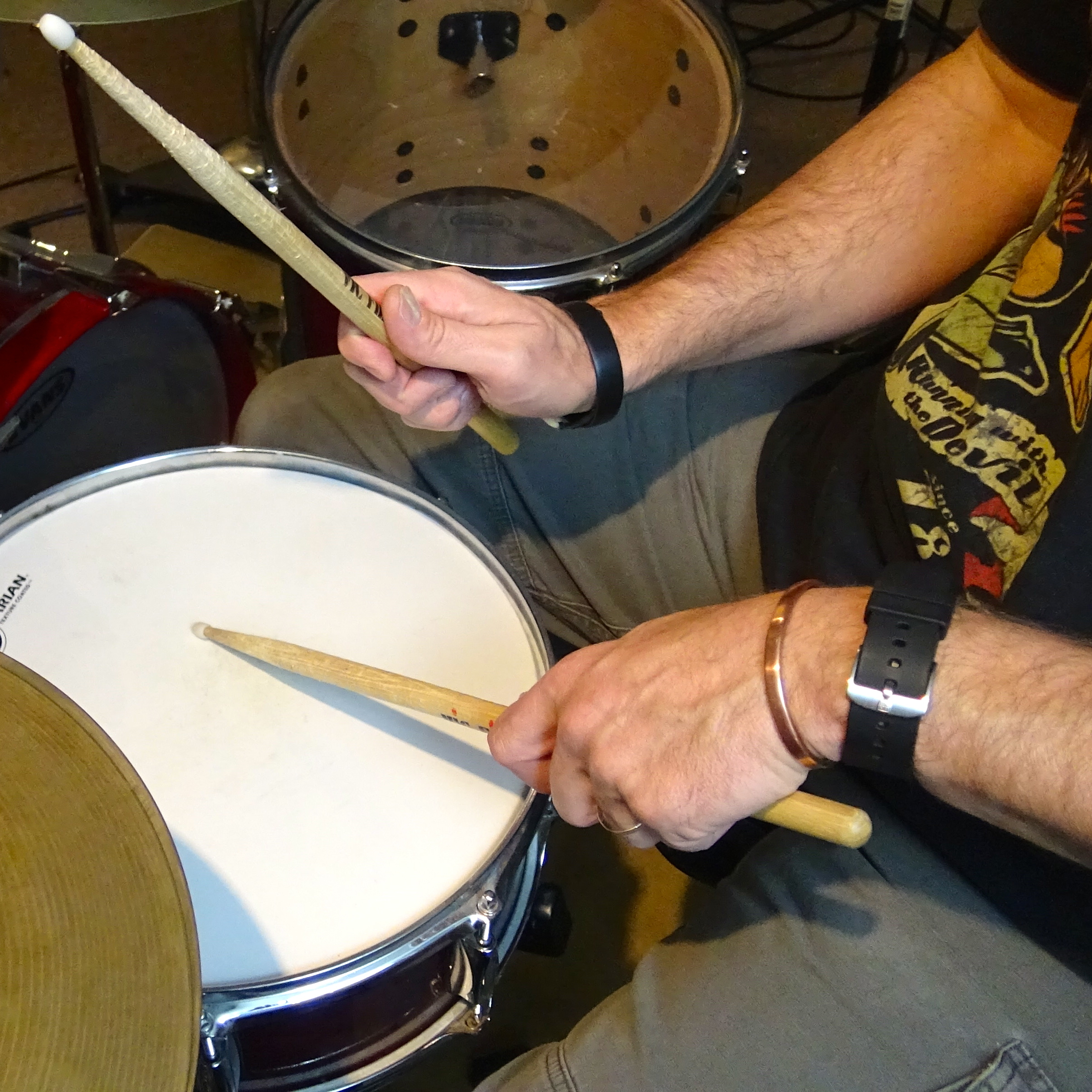 With sticks, the power and control are in the wrist. Photo: Jen Macro

Now that we have discussed the proper two-handed grip for a pistol, let’s establish what to do with drumsticks. When you properly use a drumstick, you never put your thumb on the top of the stick. The real power comes from the wrist. You don’t “chop” with the stick and arm. You snap the stick using the wrist. This gives much more power and control.

If you have the thumb on the top of the stick, it locks the wrist and the only way to move the stick is to use the whole arm. Although this “lock” is undesirable while playing the drums, it is beneficial when it comes to pointing a pistol, as it helps you to achieve kinesthetic alignment with the target and maintain control of the gun’s recoil during a rapid string of fire. 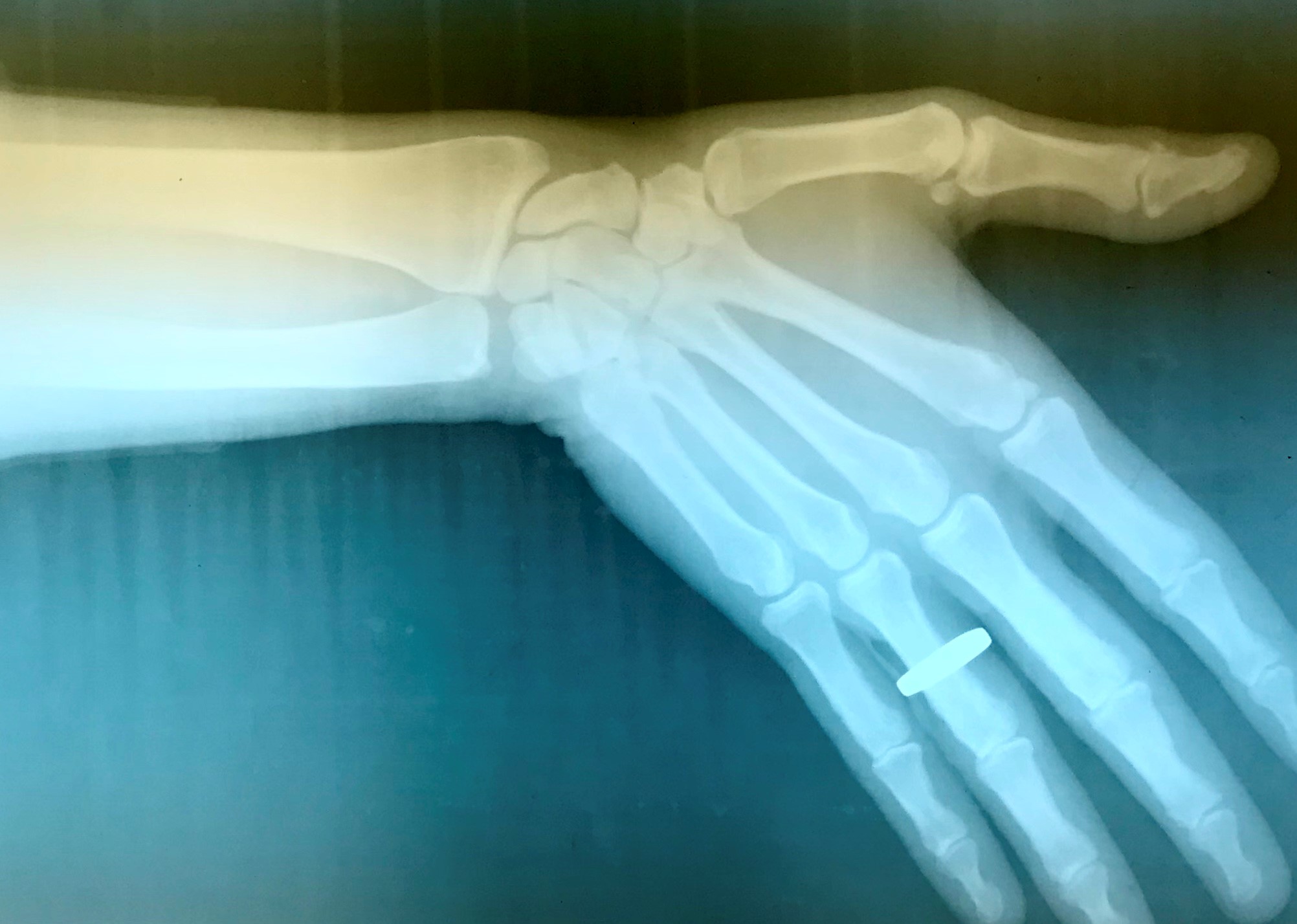 Bone support and biomechanical locks help put the gun in the same place, where it needs to be each time you put it there. Photo: Brad Shaffer

Using your “bony infrastructure” minimizes muscle support while shooting. It also helps with consistent presentation, as your bones are the same size each time you use them. Relying on your bones instead of your muscles will consistently put the gun in the same place each time you have your pistol in an extended shooting position. You extend both arms to full extension with the gun parallel and into the line of sight. Using fewer muscles requires less thinking, and we know that in a dynamic critical incident, we need all the cognitive processing we can muster to make sense of the chaos. We shouldn’t have to rely on calculations to determine if we are using a 70/30% push/pull or some other “muscle-y” technique. If there’s a choice between simple and complex, pick simple. Bone support is simpler than muscle support.

If we train frequently, realistically, and consistently, we will be more successful at developing the neural pathways to be able to run our guns and shoot more efficiently and with less cognitive processing.

Through frequent and realistic training, we can learn to use the power of recognition to respond more efficiently during a dynamic critical incident. — Rob Pincus 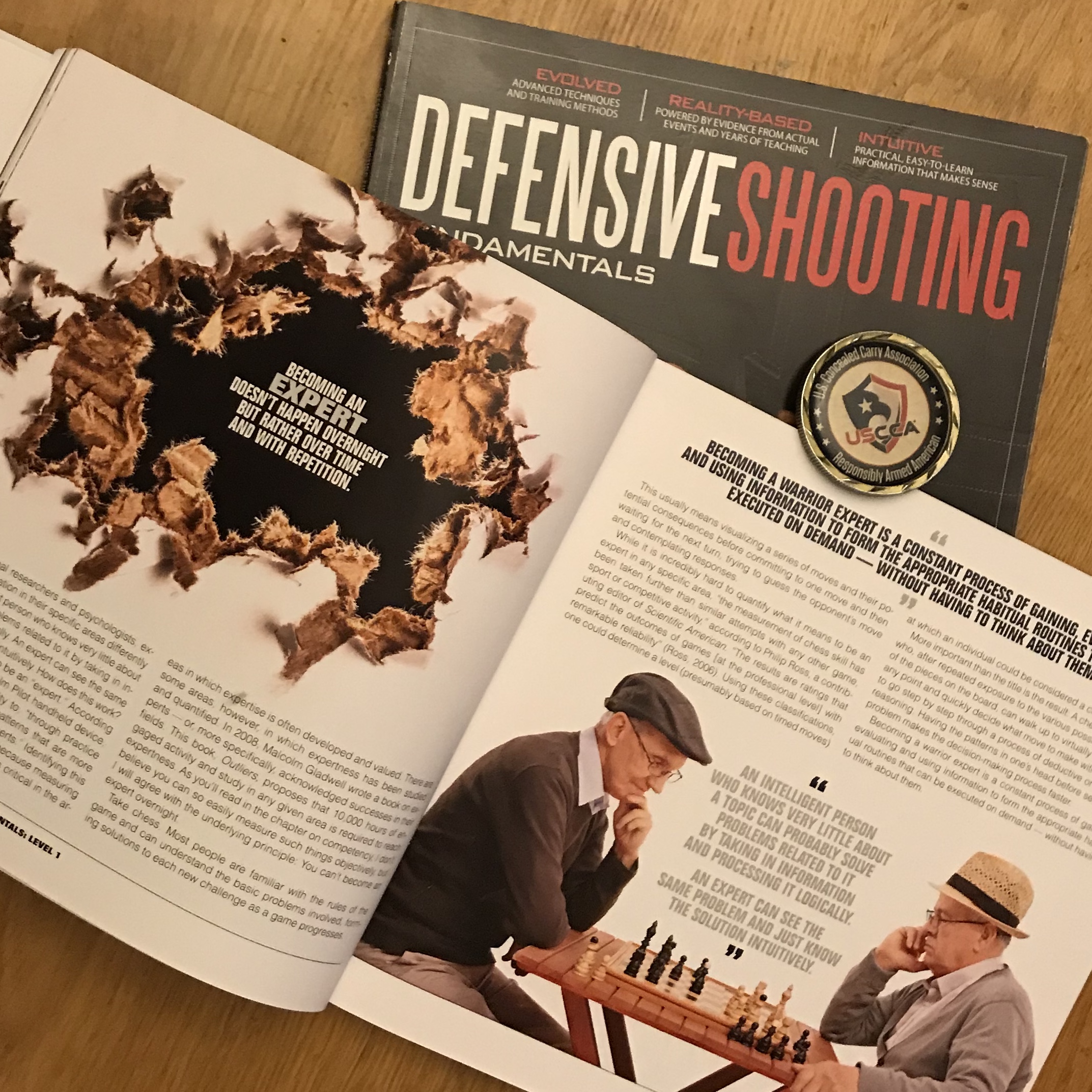 As versatile as the Warrior Expert Theory is, in this case, we can interpret it as meaning we can dedicate whatever brain power we have during a dynamic critical incident to recognition of the bad guy and other bad guys, who and where the good guys are, if there are any positions of advantage we can use (cover, barricades, or escape routes), and when it is time to end our defense. Our learned intuitive expertise in running the gun will give us that ability.

THE ARM BONE’S CONNECTED TO THE SHOULDER BONE 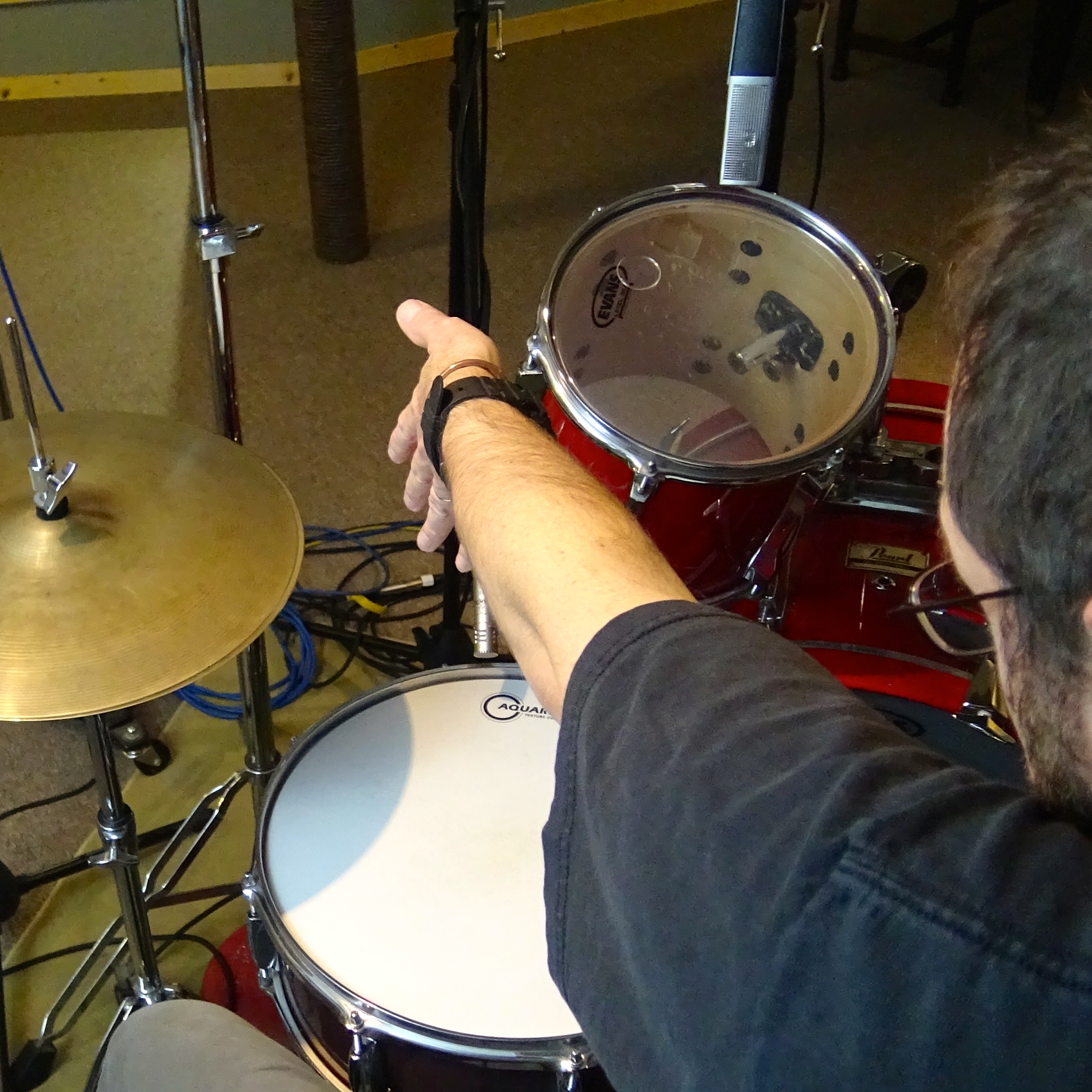 Support thumb as inline as possible with the arm bones locks the wrists and greatly limits movement of the gun. Photo: Jen Macro

If we have our support thumb as inline with our arm bones as possible, and our arms are at full extension, we will greatly minimize the movement of the gun, as we will have created the biomechanical lock at the wrist. To ensure that the muzzle settles quickly and consistently, we simply keep the shoulders and arms engaged.

Try this at home. Stick your support thumb out, poking it at a fixed point. Look down your arm and be sure the arm bone and thumb are as inline as possible. Try to move your hand down at the wrist. Most folks will find that the hand and wrist are locked inline with the arm. Now combine that with both arms at full extension, arms in front of your shoulders with the shoulders engaged, and you have greatly reduced the amount of movement that the gun could possibly make during a rapid string of fire. To deliver the next shot, simply re-engage or keep the shoulders engaged, and the gun is more likely to stay on target. 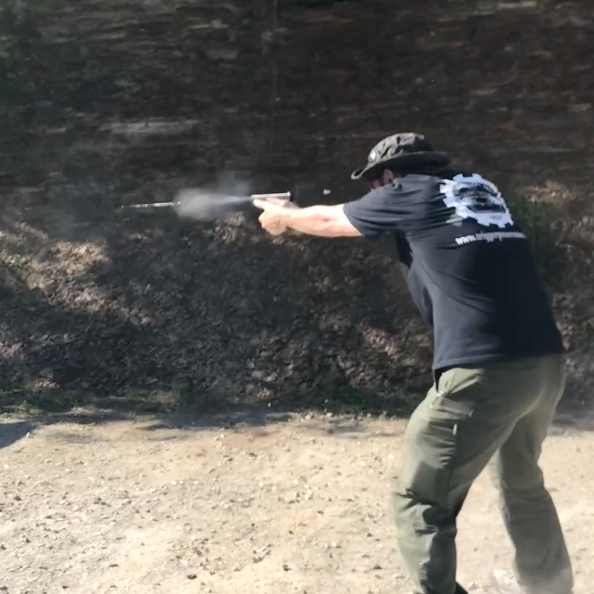 Re-engage or keep the shoulders engaged to keep the gun settled as you fire multiple shots. Photo: Rob Pincus

As mentioned before, this is how I teach a two-handed thumbs-forward grip to 90+% of my students using a semi-auto pistol. It is prudent to acknowledge that if your support thumb is long enough to extend past the muzzle, modify the technique for safety to suit yourself and your equipment.

The grip angle of your tool of self-defense should be a consideration. Photo: Matthew Snyder

Consider how crucially important grip angle is in regard to this technique. If the grip angle of your gun does not fit you, you will naturally “point” the gun somewhere other than where you are looking. For instance, I’ll borrow some photos from my “Citizen’s First Responder Infrastructure” article.

For me personally, I find that the M&P grip angle puts my muzzle low, while the Glock grip angle fits me better. Changing out a backstrap may solve this issue for you, but be certain your gun fits you properly. As I always say, no firefighter goes into a burning building with a mask that “kinda” fits. Do not rely on a vital piece of life-saving equipment that doesn’t fit you correctly. 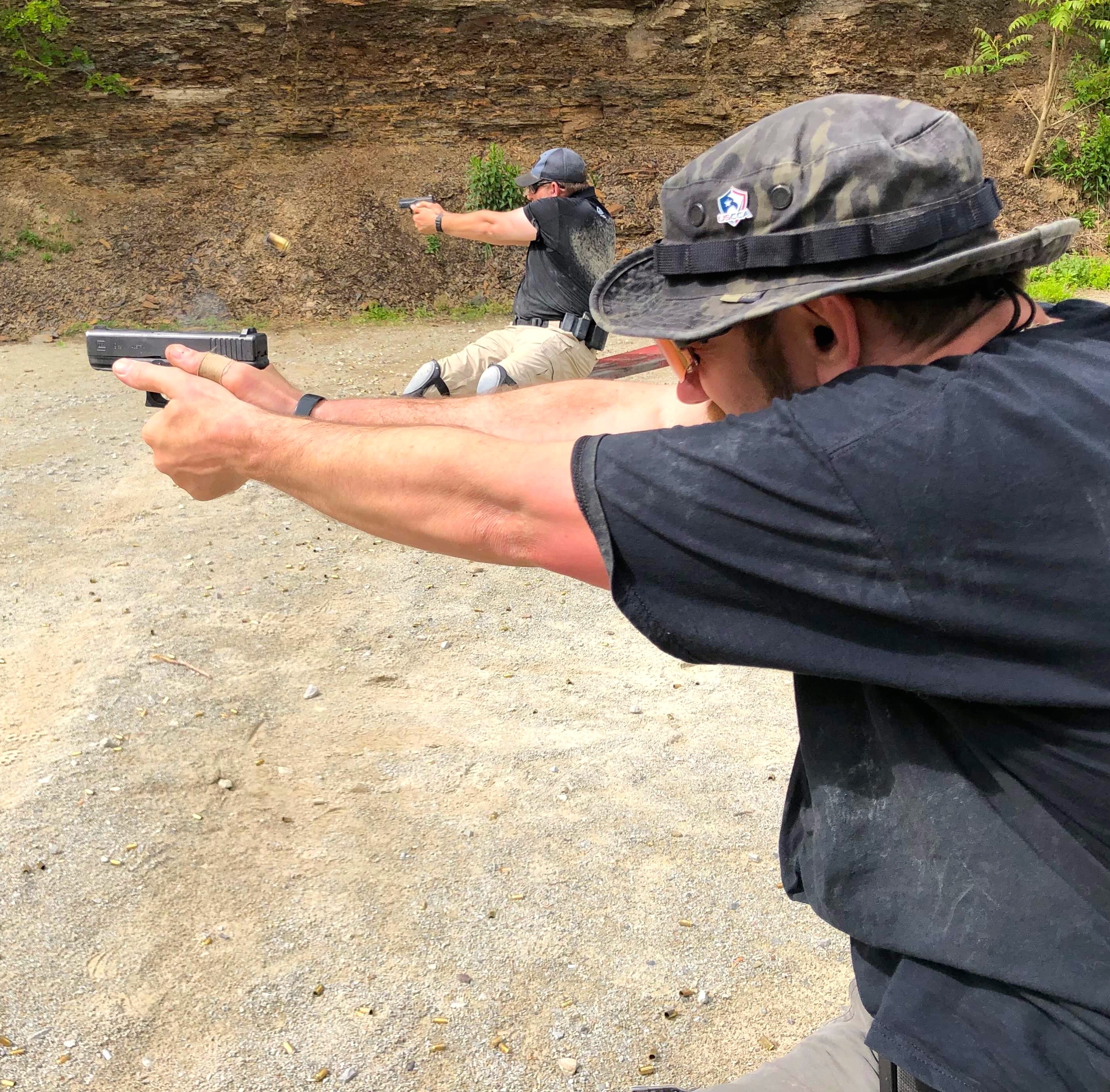 Through frequent and realistic training, your grip, combined with correct grip angle and consistent extended shooting position, will put the gun where it needs to be to use kinesthetic alignment/unsighted fire or sights when engaging the threat. Photo: Rob Pincus

One resource we can allocate to control deviation and perhaps achieve a higher degree of precision is support. Getting behind the gun, taking advantage of our bones and biomechanical locks within our skeletal structure is a resource that doesn’t cost us a lot of time yet allows for a much more efficient presentation and ultimately a faster “last shot” on target. Use your body … don’t fight it. After all, you arm yourself to protect it. Train frequently, realistically, and consistently. Choose the simpler way whenever possible, and your skills will become more intuitive and require less thought when applying them in the context of a dynamic critical incident. 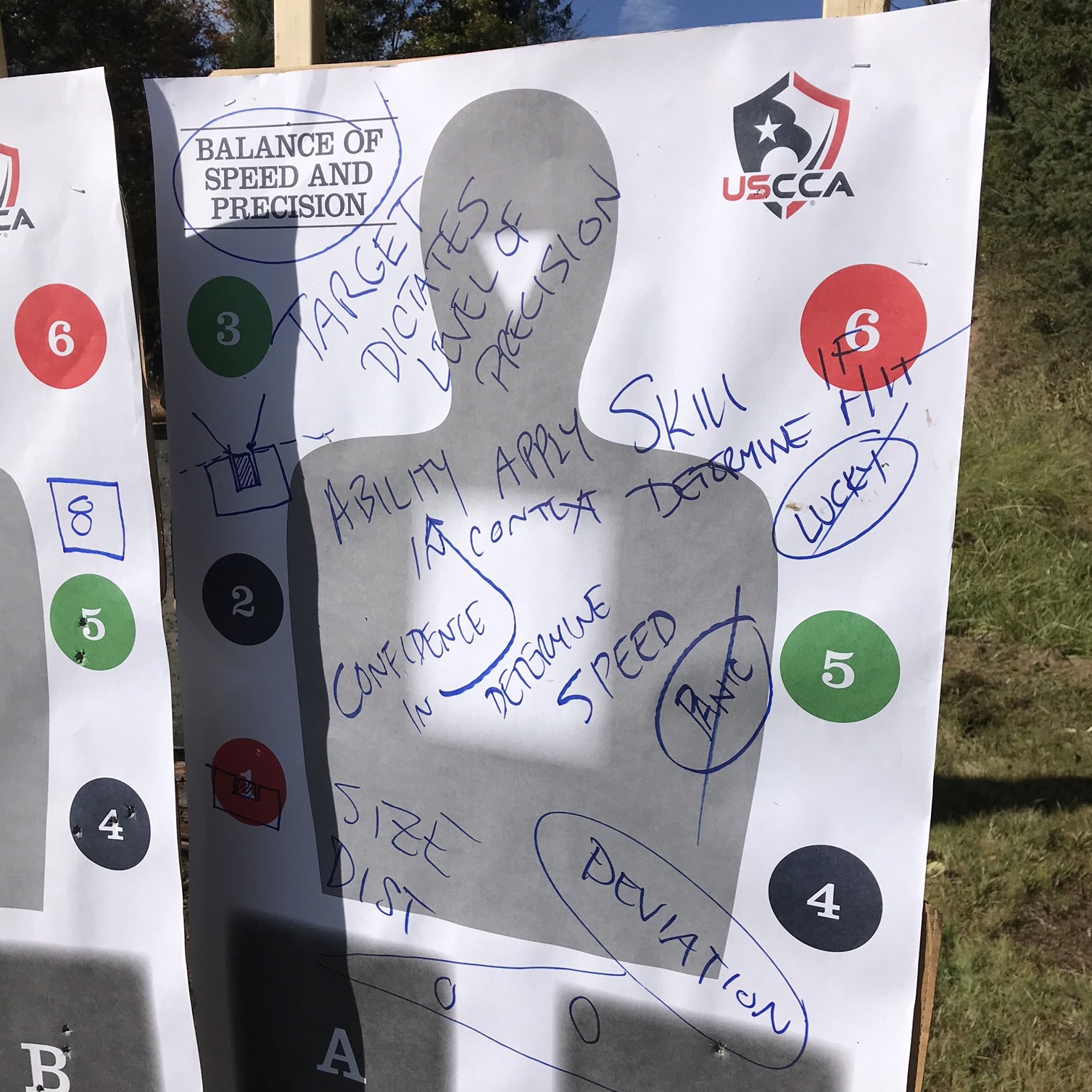 All shooting is a Balance of Speed and Precision. You must “know thyself” well enough to know what resources are necessary to allocate in order to get the hit you intend. Photo: author

9 Responses to “Bone Support, Bio Locks, and a Heavy Backbeat”