I am going to reference each malfunction via a brief description of the malfunction. Labeling a malfunction as Type 1, Type 2, Type 3, etc in my opinion does nothing to aid the operator in determining what is wrong with the cycle of operation of the firearm. Malfunctions are broken into two categories: simple malfunctions as covered here, and complex malfunctions, which will be covered in part 3 of this series.

Turn carbine outboard so ejection port is down.

Immediate action is used as a primary refunction procedure for all simple malfunctions. If the operator feels the trigger click, the hammer has dropped, which indicates that the bolt was able to fully cycle. The operator is experiencing either a Failure to Fire or a Shallow Failure to Eject. Be aware that performing immediate action on a double- or triple-feed malfunction will increase the severity of that malfunction and add to remediation time. Immediate action should not be utilized as a “non-diagnostic” go-to procedure. Follow the recommended guidelines and you will decrease the chances of this eventuality. CLICK means TAP, MUSH means RIP. 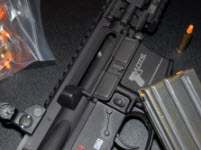 Setting up the Failure to Fire: 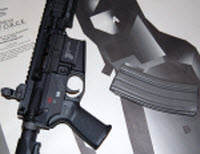 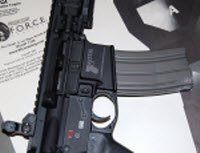 Operator attempts to fire and experiences a failure to fire, feeling a click. Immediate action drill is initiated.

Operator attempts to fire and experiences a failure to fire, feeling a click. Immediate action drill is initiated.

Carbine is rolled outboard and magazine is TAPPED aggressively.

*Finger out of trigger guard

Charging handle release is depressed and handle is RACKED aggressively to the rear, ejecting the bad round. Handle is RELEASED, stripping a new round from the magazine and chambering the round.

With the failure to eject, the bolt has reciprocated and in the process caught the previously spent casing as it was being ejected. Two specific types of failure to eject have been identified, the shallow and the deep. With a shallow failure to eject, the spent casing is caught between the edge of the bolt carrier group and the front vertical edge of the ejection port. Either failure to eject can be caused by blocking the ejection port (operator error or possibly crowding cover), dirty weapon, weak or broken ejector, or weak extractor spring. The operator will feel a click when attempting to fire and follow our Refunction Mantra: CLICK means TAP. 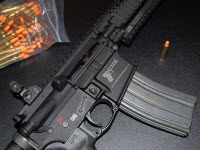 Setting up the Shallow Failure to Eject: 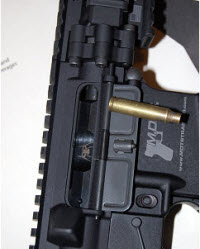 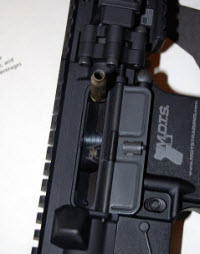 THIS METHOD IS NOT RECOMMENDED. DO NOT BREAK FINAL FIRING GRIP

Why can’t I just wipe it off or pull the piece of brass out?

If you are firing the weapon system, your first indicator of this malfunction will be your pulling the trigger and feeling a click. If this is the case, then the hammer has fallen and the firearm will not go on safe.

If there is enough brass available for you to wipe off or pull out, when you do so, the bolt may drop forward onto a live round. But you still need to reciprocate the bolt in order to cock the hammer, enabling the firearm to discharge. This reciprocation may possibly extract and eject the round that was in the chamber and strip and feed a new round from the magazine. Essentially, you have conducted a TAP, RACK.

This is a training deficiency associated with drilling vs. fighting or actually attempting to fire the carbine and then diagnose the problem. Training with dummy rounds at home in a safe environment is better than not training, but be aware that a critical component of the diagnostic process with this weapon system is attempting to fire live rounds.

Running a drill where the malfunction is already set up and can be visualized is far different than actually firing the carbine and experiencing the malfunction in-fight. For a left-handed carbine operator, visualizing the stovepipe is not a problem. But for a right-handed operator, with the ejection port on the opposite side of the rifle, distinguishing the stovepipe from the failure to fire is impossible. The time spent rolling the carbine inboard to attain visual reference is better spent following a fast and efficient immediate action drill. 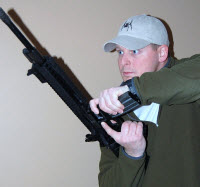 Operator has attempted to fire and experiences a shallow failure to eject, feeling a click. In this sequence, the carbine is brought into the high control position to better facilitate any rounds or debris falling out. Immediate action drill is initiated. 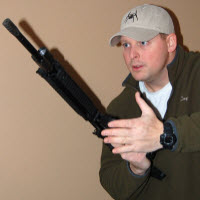 Carbine is rolled outboard into high control and magazine is TAPPED aggressively.

*Finger out of trigger guard 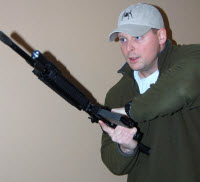 Charging handle release is depressed and handle is RACKED aggressively to the rear, ejecting the bad round and clearing the ejection port. Handle is RELEASED, stripping a new round from the magazine and chambering the round.

In part 3, I’ll discuss the five types of complex carbine malfunctions and the refunction procedures for each.