Double Feed: With a true double feed, two rounds have come out of the magazine and both are being forced into the chamber by the bolt in a “V” configuration. A double feed can be caused by having a dirty weapon, or a bad or overloaded magazine. The operator will feel a MUSH when attempting to fire and follow our Refunction Mantra: MUSH means RIP.

Setting Up the Double Feed: 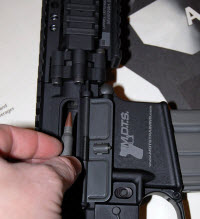 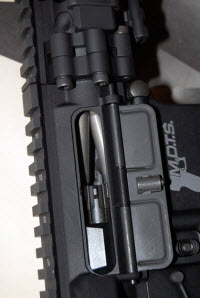 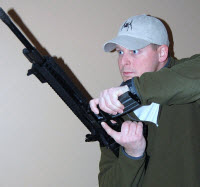 Operator has attempted to fire and experiences a double feed, feeling a MUSH of the trigger. Remedial action drill is initiated.

WARNING! If a TAP, RACK is initiated, this malfunction can be made more severe by hammering the rounds deeper into the chamber! 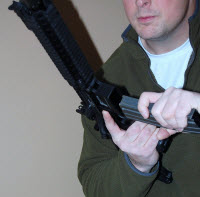 Carbine is rolled outboard into high control and magazine is RIPPED out.

*Finger out of trigger guard.

PULL and HOLD charging handle back, INSERT a finger and DIGITALLY MANIPULATE stuck casings/rounds out. 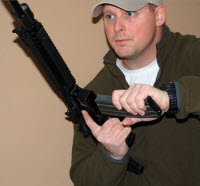 The triple feed occurs when a spent casing becomes lodged in the carrier key channel above the bolt carrier, a live round is in the chamber, and another round is attempting to be fed into the chamber. This malfunction is commonly caused when the operator clears a failure to eject improperly by rolling the carbine inboard (ejection port upward) instead of outboard during remediation and rides the charging handle forward, or by blocking the ejection port. These operator errors cause the casing either to fall back into the receiver or remain in the receiver, where it gets kicked up into the carrier key channel by the bolt reciprocating and attempting to feed a new round. The end results are a spent casing above the bolt carrier impinging the charging handle, and a double feed in the chamber. The operator will feel a MUSH and follow our Refunction Mantra: MUSH means RIP.

Setting Up the Triple Feed: 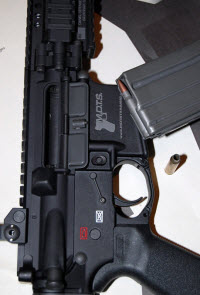 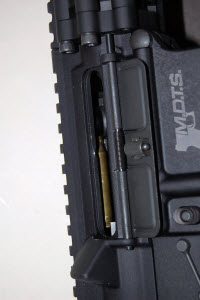 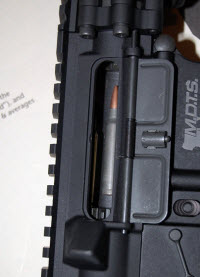 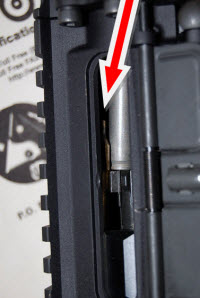 Operator has attempted to fire and experiences a Triple Feed, feeling a MUSH of the trigger. Remedial action drill is initiated.

Carbine is rolled outboard into high control and magazine is RIPPED out.

*Finger out of trigger guard.

Rounds in the chamber must be removed prior to remediating charging handle impingement!

PULL and HOLD charging handle back as far as possible, INSERT a finger and DIGITALLY MANIPULATE any stuck casings/rounds out

This MUST be done in order to remediate the charging handle impingement. 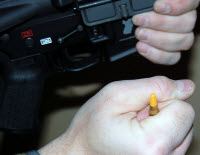 Use an expedient tool like the tip of a live round, index finger, Leatherman or corner of magazine.

Hook tool on edge of bolt carrier group and pull rearward while angling magazine well downward so gravity can assist.

RACK, RELOAD, RACK. Sights are reacquired and target(s)/environment are REASSESSED.

This is where the bolt will not unlock from the chamber. The failure to unlock can be caused by having a dirty weapon (operator error), a bulged casing, worn locking lugs, a lubricated chamber or non-spec ammunition. Remediation of this malfunction can be either administrative or combative, depending upon how tightly the bolt is locked. This malfunction cannot be replicated for training purposes, but in high-round-count courses, it is not uncommon to see one or two. 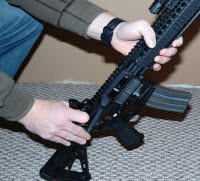 One combative method to remediate this malfunction is to attempt to put the weapon on safe, collapse the stock, take a knee and elevate the muzzle 45 degrees, depress the charging handle release while robustly striking the buttstock on the ground or floor. The inertia of the bolt carrier may unlock the bolt. This method is commonly referred to as “mortaring.”

While this method may work, it can damage the stock of the firearm and/or bend the buffer tube, rendering the firearm inoperable. Utilizing this technique also limits mobility when assuming a kneeling position, which is not recommended in any combative environment. 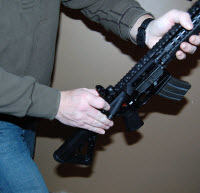 Another option is to remain standing, attempt to place the carbine on safe, step forward with one leg, angle the carbine away from your body, tense the muscles of that leg and depress the charging handle release while smartly striking the buttstock against the inner surface of your tensed thigh muscle. 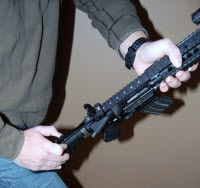 Utilizing this method, there is a very good chance that you will strike the stock hard enough to unlock the bolt but not hard enough to damage the firearm. This method generates enough force to remediate the malfunction and allows the operator to move rapidly if necessary.

Remediating malfunctions efficiently gets you back in action quickly. Although you can take certain actions up front to minimize the number of malfunctions you experience (e.g., using quality magazines and ammo, keeping your weapon clean, replacing worn parts), you may still experience one for any of the reasons outlined throughout this series, and experience it at an inopportune time. Being able to perform the remedial action drills for each malfunction will keep your carbine from turning into a club.