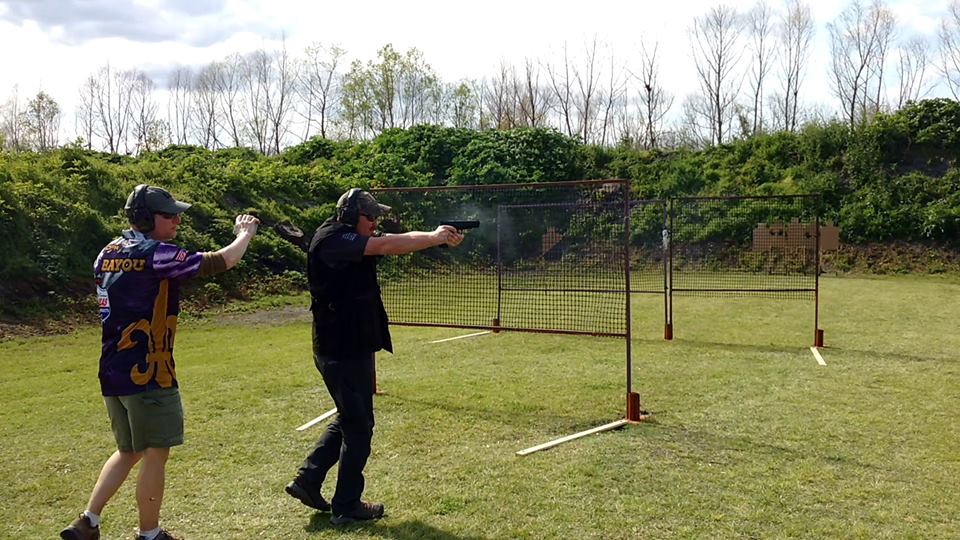 Competitions are fun and a great way to improve your mechanical gun-handling skills.
Photo: Lloyd Bailey

I like to participate in shooting competitions, as do many hobbyists who primarily own and carry guns for personal defense. As I’ve written before, I believe that competitions are great ways to meet other shooters and have a good time shooting your gun. They also help you fine-tune your skills and practice different shooting positions and angles that don’t present themselves in normal square-range sessions. They may also afford you the opportunity to do things that your practice range would not otherwise allow.

In addition to shooting matches, I continue to teach Combat Focus Shooting (CFS) courses and structure my defensive handgun practice sessions around the CFS paradigm. Recently, I’ve noticed some potential pitfalls that come with approaching your handgun practice from a defensive perspective while also participating in competitions. I hope my range experiences from doing both and having students who do both will help you avoid some potentially detrimental outcomes if you choose to participate in competitive shooting.

(Disclaimer: If you don’t accept that there is a difference between reality and playing a game, this article will be useless to you. This is only helpful if you understand that training for personal defense and competing are two different, often contradictory, pursuits that can nonetheless be enjoyed simultaneously.)

The seriousness of your potential problems if you choose to compete will be directly related to how seriously you take the competitions. You could very easily go to a match, shoot in the way you have learned in a class like CFS, and lose miserably while racking up astronomical amounts of penalties. If you take this approach, you’ll look ridiculous compared to the other competitors, you’ll be mocked, and nobody will want to shoot with you. You’ll be “that guy,” so to speak.

Also, if you are a highly competitive and athletic person, it is going to frustrate you that you aren’t placing above anyone who isn’t either a total noob or disqualified from the match. While a few people don’t have ego invested when they sign up for a match, most of us don’t want to be “that guy.” Therefore, most of us will start doing things that make it more likely we’ll score higher and get fewer penalties when we practice. In doing that, the things we know we “should” be doing from a defensive perspective will sometimes get neglected if we aren’t careful.

First, you will likely find yourself losing some of your ability to visualize reality. When you shoot a match, you get a stage description and a walk-through of the array of targets and obstacles prior to shooting the stage. In some matches, you even get specific instructions on how you must shoot the stage, such as how many shots each target gets and what level of precision is required for each target, or what order they must be shot in. After a walk-through, it behooves you to develop a specific plan about how to shoot the stage as fast as possible by deciding which targets you will engage in what order, when you will move, where you will move to, where you will do your reloads, where you have room to take make-up shots if you miss, etc. How well you develop and execute your stage plan can make a big difference in how well you score compared to everyone else. If you don’t make a stage plan and just shoot the stage cold, you’re likely not going to score well.

In defensive shooting, there is no stage description or walk-through, and everything you do will be based on your body’s natural reactions, your learned responses to recognized stimuli during the course of the fight (responses you have hopefully developed through realistic training and practice), and improvisation. Since you cannot possibly know in advance the specifics of what a given defensive encounter will look like, you should not artificially ingrain a choreographed approach to surviving those encounters. 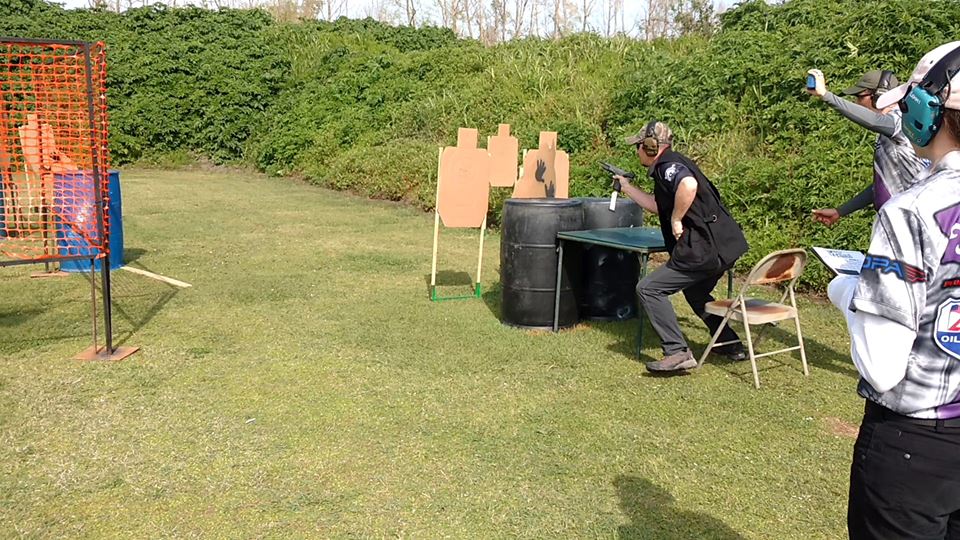 A lot of the things you do in competitions are unrealistic and just part of playing the game.
Photo: Lloyd Bailey

In realistic defensive handgun training, you have to be able to suspend disbelief and start thinking about more than just putting holes as fast as you can in the paper you know is in front of you. In a competition, how well those holes in paper score against the timer is your only concern. This can create a big visualization problem that will cross over into your defensive practice if you aren’t careful. One of the biggest issues I run into in class when I have students who cross back and forth from competition to defensive training is getting them to think about more than just how fast they can get good hits on paper.

They often have issues integrating the body’s natural reactions prior to presentation from the holster, moving laterally, focusing on the threat instead of the front sight when precision isn’t required, processing information after shooting a string of fire at the target, etc. Basically, everything except shooting at the paper really fast and getting good hits becomes extraneous to them when in the context of personal defense, although those extra things are actually quite important. This inability to visualize the plausible circumstances of a fight comes from chasing tenths of seconds and zeroing in on speed and mechanics as opposed to the other elements inherent in a fight because those things aren’t present in competitions.

Second, you are likely going to have a resource allocation problem. If you want to compete and do well, you need gear that is designed specifically for competition. I have an entirely different holster, belt, and gun for competition, and they deviate significantly from what I use for concealed carry. The trigger on my competition gun is about three pounds, while my carry gun trigger is five pounds. The holster I wear for competition is an outside-the-waistband strong-side hip rig due to the match rules, while the holster I carry concealed with is an inside-the-waistband appendix-carry rig. Aside from the monetary expense of having the right gear for competition (probably not a real issue for a hobbyist), the transition back and forth has caused me some neurological issues.

One example of this happened when I had shot nothing but matches with my competition rig for two months and then took an Advanced Pistol Handling class with Rob Pincus with my carry gear. Something as simple as the difference in trigger weight on the carry gun I hadn’t shot in a long time gave me fits when trying to achieve precise hits on smaller targets, because my fingers were used to a much lighter trigger with less travel.

As a result of switching between triggers, the sympathetic muscle tension in my fingers was heightened, which caused me to pull the muzzle down when I pressed the heavier trigger that I wasn’t used to. You may not realize how much of a difference little tweaks like that can make when going back and forth between the different gear setups. 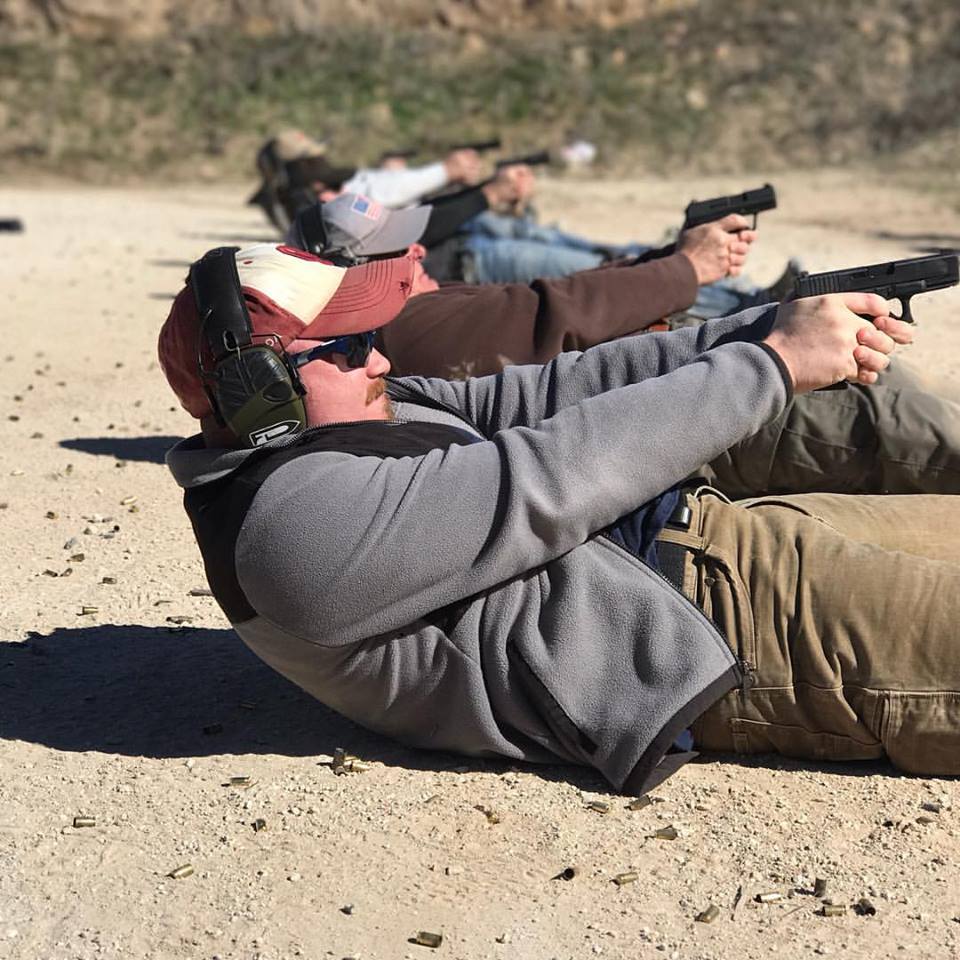 Once the gun is in your hand, “shooting is shooting,” but that’s only one piece of the puzzle. Photo: author

If you allocate a bulk of your training resources to developing skills that will win matches, the tradeoff is going to be that you spend fewer resources on the kind of contextual skills that are important in a fight. At the end of the day, once the gun is in your hand, “shooting is shooting,” but shooting is only one piece of a much bigger puzzle. If you carry a gun for personal defense, be careful not to overlook the other pieces of the puzzle. You have to deliberately keep the context and gear of personal defense a part of your practice sessions. This requires discipline.

“IT WILL GET YOU KILLED ON THE STREETS!”

All of that said, I don’t believe you are potentially putting your life at risk if you decide to participate in shooting competitions. The “it will get you killed on the streets” cliché is mostly hyperbole. But if you aren’t careful, you will be sacrificing some things that could increase your survivability in order to focus on playing the game better and potentially winning trophies. You could theoretically alleviate all of this to some extent by shooting matches with your concealed carry gear, not coming up with a stage plan, and integrating the byproducts of visualization and context into how you shoot each target. You’ll subsequently rack up a lot of penalties and lose the match as mentioned above. But I doubt many of you will do that. I certainly will not. Therefore, you’re going to have to be careful how you structure your practice sessions if you’re going to do both. 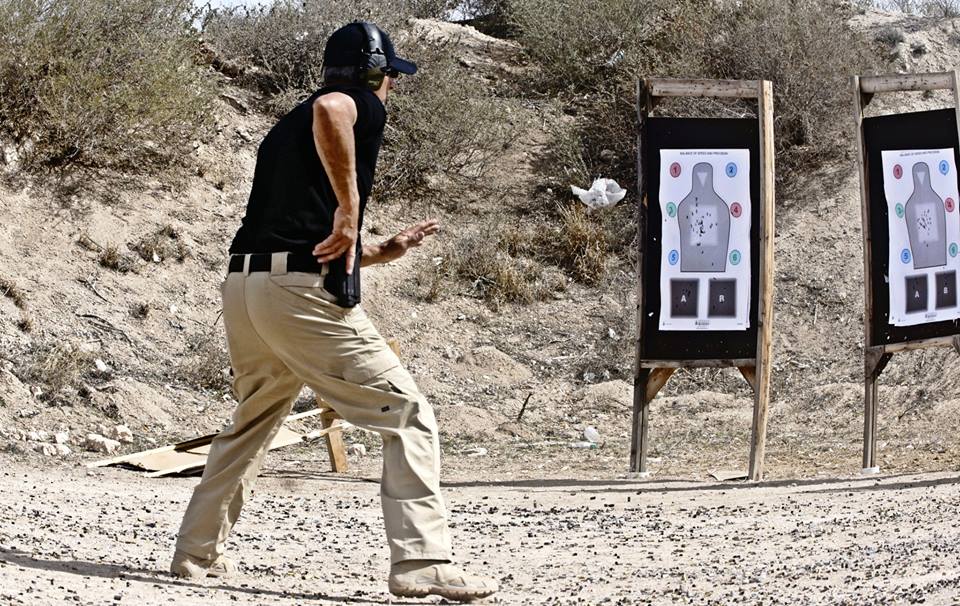 Practicing for personal defense requires simulating context. The body’s natural reactions, lateral movement, intuitive use of your sights, and processing information after shooting are all factors that aren’t present in competition but should be part of your defensive practice. Photo: author

The biggest thing to be careful of is not becoming so obsessed with matches that you start trying to convince yourself they substitute for realistic defensive training and practice. I see a lot of even high-level shooters who make that mistake. Our brains have room for both skill sets, and they do intersect at a lot of places, but you can’t substitute one for the other. If you only practice for personal defense, you’ll lose the match. And if you only practice for matches, you’ll leave out a lot of important contextual elements.

WHAT’S MOST IMPORTANT TO YOU?

One thing I’m working on doing to guard against these issues is to only practice specifically for matches in the lead-up to bigger regional matches, where prizes and bragging rights are at stake. This is only a couple of times per year. The rest of the time, I do my normal defensive practice in context and throw in a match or two that I don’t care about winning just for fun at the club level. This helps me keep my focus where it needs to be from a personal defense perspective most of the time, while shifting focus to trying to win matches only for short periods of time.

This probably means I won’t be winning a lot of first-place trophies or picking up big sponsorships, but I’ll at least post a modest showing and not feel like I wasted a weekend, as someone who values “making a showing.” If you take competition a lot more seriously than I do, that will be harder for you to do. But keep in mind there’s always a trade-off no matter what you do. At the end of the day, you have to decide what’s most important to you, and you’ll have to make sacrifices somewhere. You must choose, but choose wisely.