“Hell yes! I worked hard for my property. You try to take it away from me, you deserve to die, and I’m just the guy who’ll do it!” 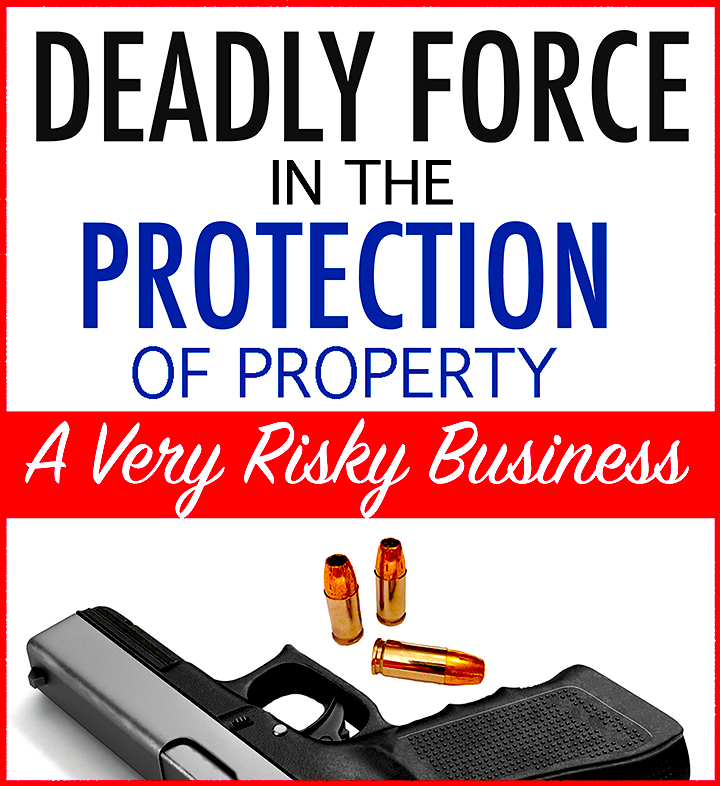 Image: Design for Print and Web

The decision to use deadly force to protect personal property involves the question of whether deadly force “may” be used, but equally important, whether it “should” be used. One is clearly a legal question. The other is a moral question and, perhaps more importantly, a practical question, one that you should not be in a hurry to answer. First, it is very important to understand that the laws providing the legal right to use deadly force vary greatly from state to state.

In Texas, deadly force may be used to protect property from criminal activity or to prevent a fleeing felon from making off with property, but only if the property owner “reasonably believes” the property cannot be protected by any other means, or attempted recovery would subject the owner to the risk of death or serious injury. So you can legally use deadly force to protect property, right? Maybe, maybe not, please read on.

In Georgia, deadly force cannot be used to protect property unless the owner “reasonably believes” it is necessary to prevent a “forcible felony,” a term with a very specific definition including, but not limited to, physical force or violence against a person, including murder, burglary, robbery, kidnapping, or rape. Florida, Illinois, Ohio, and Pennsylvania use similar language, as do other states. But the crimes included in the definition of a “forcible felony” can vary significantly from state to state. Florida includes car jackings, and Illinois includes residential burglary. In Pennsylvania, the term only refers to crimes capable of causing death, serious bodily injury, kidnapping, or forceful rape. In Iowa, it includes human trafficking. The statutory law dealing with the use of deadly force in the protection of property varies significantly from state to state.

In Minnesota, deadly force is authorized in the face of an immediate threat of death or crippling injury, or to prevent the commission of a felony “in the actor’s place of abode.” Seems straightforward, but it is not. The Minnesota appellate courts have interpreted this language to mean that deadly force in “defense of a dwelling” must meet three criteria: (1) the belief that deadly force was necessary to prevent the commission of a felony in the dwelling; (2) the person’s judgment as to the gravity of the situation was “reasonable” under the circumstances; and (3) a “reasonable person” would have done the same thing under the same circumstances.

The lesson to be learned here is this: When you are dealing with legal issues, and you see the word “reasonable,” think jury, lawyers, attorney fees, and time away from work with the possibility of conviction and loss of freedom for a significant period of time.

Some states by statute make it clear that deadly force cannot be used in defense of property. In Tennessee, the law states that “Unless a person is justified in using deadly force as otherwise provided by law, a person is not justified in using deadly force to prevent or terminate the other’s trespass on real estate or unlawful interference with personal property.” Arizona, Iowa, and Utah law on the subject is similar. In Massachusetts, the deadly force statute specifically excludes defense of property and requires that a person defending their home have a reasonable belief that the intruder is about to inflict great bodily injury or death upon someone and that deadly force was the only reasonable means of defense. This is true in a number of other states as well.

Most states have a definition in their laws for what constitutes a justifiable use of deadly force. The usual standard is that the person using lethal force has to have a “reasonable” expectation of either death or grave injury to themselves or someone else if they don’t act. That doesn’t include property; it must be a threat to life or limb, or else it isn’t legal. Washington state law authorizes deadly force “when there is ‘reasonable ground’ to believe another intends to commit an immediate felony or to do some great personal injury to the slayer or to some other person.” There’s that term “reasonable” again.

At the same time that you are dealing with the statutory law of a state, think about this. Not only do deadly force laws vary from state to state, but so also do how law-enforcement officers, prosecuting attorneys, and the courts interpret those statutes, even within a given state.

In 2007, a Pasadena, Texas man was subjected to a grand jury review of his fatal shooting of two attempted burglars at his neighbor’s home. The shooting occurred while a law-enforcement dispatcher was on the phone telling him not to interfere with the burglars, as officers had been dispatched. He shot them both anyway because they were “getting away.” The prosecutor convened a grand jury, which refused to indict the man for murder, and no other charges were filed.

In Spokane, Washington in 2013, a man who shot and killed a car thief driving away in the stolen vehicle was charged with first-degree manslaughter. A year later, the shooter was acquitted of the criminal charges, and a Washington jury found that his actions were also justifiable, requiring the state to compensate him for a reported $300,000 in legal bills.

In contrast, in July 2016, an armed customer opened fire on a Spokane Valley bank robber in the middle of a robbery at a credit union. The bank robber was not threatening the customer directly, but he was committing an armed crime. The robber was shot and wounded and later apprehended. The prosecutor, after reviewing the situation, declined to charge the citizen who wounded the robber.

In 2015, an Ohio man shot at two fleeing burglars in his yard, killing one. He was charged with manslaughter, convicted and, in 2017, sentenced to serve six years in prison.

In 2017, a Minnesota man who surprised three men attempting to burglarize his isolated country home was charged with second-degree manslaughter after fatally shooting the driver of a car that attempted to run him over in his own driveway. The manslaughter charge was eventually dismissed, and the homeowner entered a plea to a felony charge of reckless discharge of a firearm.

USE DEADLY FORCE ONLY WHEN YOU MUST

Literally dozens of such stories are popping up all over the country. How do we reconcile the different outcomes? We cannot, because they are the subject of the exercise of human discretion and judgment. That makes the outcome unpredictable because each incident is driven by facts unique to that case. I have included a small sampling to illustrate the point.

Deadly force is a justification for what would otherwise be a crime: the taking of a human life or causing some grievous bodily injury. As such, it should be reserved for “must” situations, where life or serious injury are being threatened, and not employed in “can” situations. In self-defense incidents, experienced trainers as well as experienced self-defense attorneys will tell you, there will be two fights. The first is the fight to preserve your life or the life of someone close to you. The second, longer, more protracted, and much more expensive one may very well be the fight for your future. Deciding to wage either of those fights over easily replaceable property is not a wise investment of time, energy, or money.