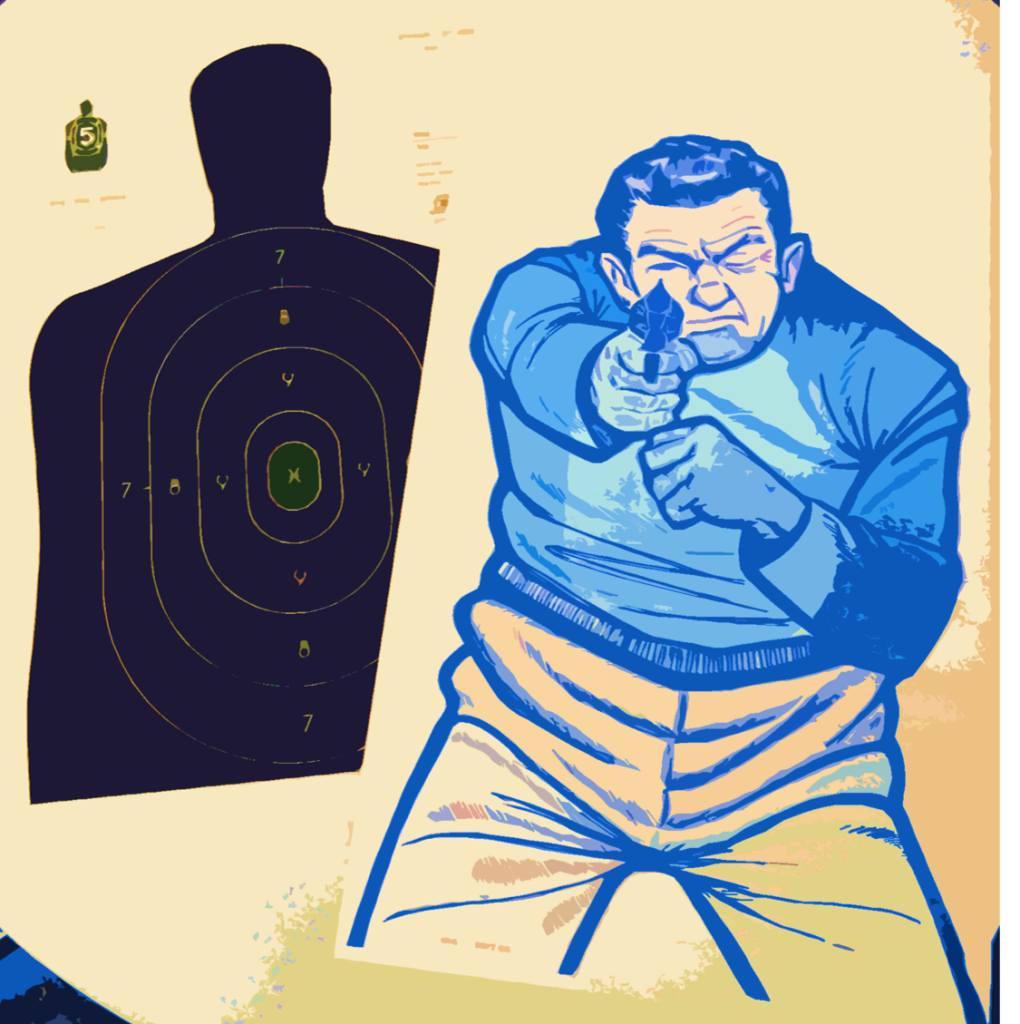 B-27 target (left) suggests human opponent but without specific form, making it perhaps easier for us to visualize the details. Photo: author

First, the good news: there is a powerful resource available to you … right now … free of charge … that can greatly increase the value of your defensive training and practice! The bad news? You might already be using this resource without realizing its potential and how it can affect what you are doing to prepare yourself for an encounter with a violent assailant. What I’m talking about is something that your brain is already doing, countless times, under every imaginable circumstance, every day: the power of visualization.

Put simply, visualization is part of our standard-equipment mental software that allows us to put shape to things that aren’t really there. Most of us have no problem understanding and taking advantage of this on-board survival mechanism. After all, without even doing so consciously, we will allow a simple line drawing, piece of comic-book art, or black-and-white photograph to stand in for the three-dimensional flesh-and-blood attacker against whom we may have to do battle. In fact, this ability extends to amorphous, abstract humanoid shapes. Anyone who has ever trained on any B-27 type silhouette, military “E” target, or IPSC die cut will attest that, while these items don’t look much like the folks living next door, it isn’t too hard to recognize what they are intended to be.

The concept of how “real” the target may appear is more important than you might think. For example, history tells us that a balance must be achieved to train soldiers effectively for battle. Combat experience demonstrated over and over again that soldiers did not associate a bulls-eye target with an enemy fighter and would not reliably call upon the same skills to shoot it, making traditional marksmanship training somewhat less relevant. But changing over to highly realistic targets revealed a different problem: targets that had an abundance of recognizable human characteristics weren’t being shot, either. And this — alarmingly — might include actual enemy soldiers! 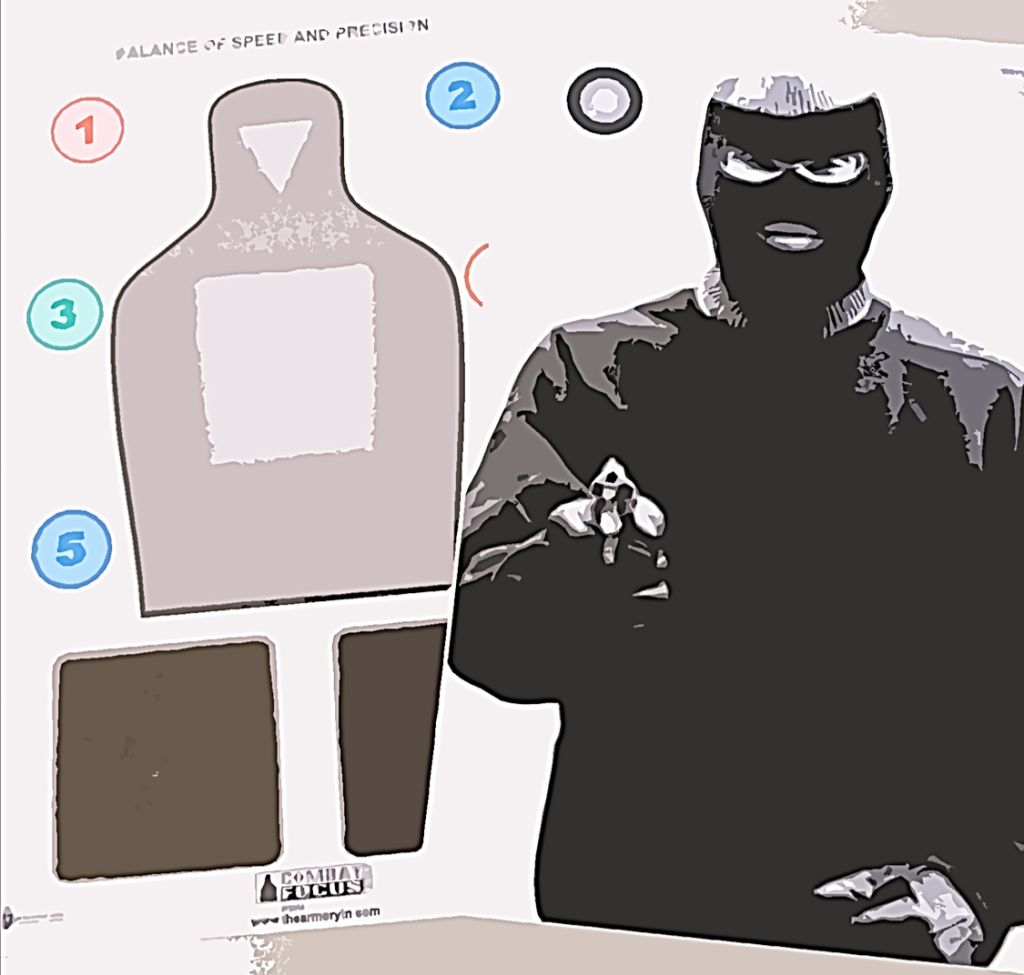 The solution came from recognizing the bigger problem. Soldiers in combat were historically (largely) miserable creatures, reluctantly thrown into horrible circumstances by forces beyond their control. This meant that, while they would fight hard and well, they were only highly motivated to kill the enemy if they themselves were in immediate serious danger. So the idea was to create a target that suggested a human form but without enough detail to provoke a sympathetic response. Thus the classic silhouette target was born. As time went by, wars ended and soldiers returned to peacetime and civilian life. Those who continued to train with firearms brought their familiar silhouette with them, making those the most common kind of training target available to us today.

However, we legally armed citizens training to survive a close encounter of the worst kind don’t get the same benefit that a warfighter might get from this type of target. After all, our plausible circumstances are that while minding our own (presumably lawful and normal) business, we are suddenly and unexpectedly confronted with a lethal threat. That we possess all the needed motivation to defend ourselves should be a foregone conclusion!

What all this means is that our self-defense target should be as real as possible. But we can’t ignore the benefits of the target having a specific marked area, such as a box or circle that indicates the high center chest. Otherwise, we are denied the performance feedback so critical to core skill development. So what is the solution? Visualization, of course! We can look at that dry, flat piece of paper … look directly at that amorphous “bottle” shape … and turn it into a three-dimensional bad guy, complete with hair, eyes, teeth, and body odor! Targets that are photographs of real people don’t work as well for visualization, mostly due to the fact that we see them for what they are: still photographs. Although it might seem counter-intuitive, a defensive target that lacks detail makes it easier for our imagination to “fill in the blanks.” The more authentic we allow our envisioned threat to become, the greater the urgency of our response to it. So this is the first function of visualization: bringing a higher degree of realism to our training by providing something that isn’t really there.

The second function of visualization is not nearly as appreciated but is just as important. Visualization allows us not only to see what isn’t really there — it also allows us to experience events that aren’t really happening! Long story short, a highly realistic bad guy isn’t doing us much good unless he can be made to behave as a bad guy would behave. Relatively few flesh-and-blood attackers will stand there in front of us, completely motionless, while we get ready to shoot them. Fewer still will remain there once the bullets start flying. By using visualization, we can assign movement and reaction to our bad guy. 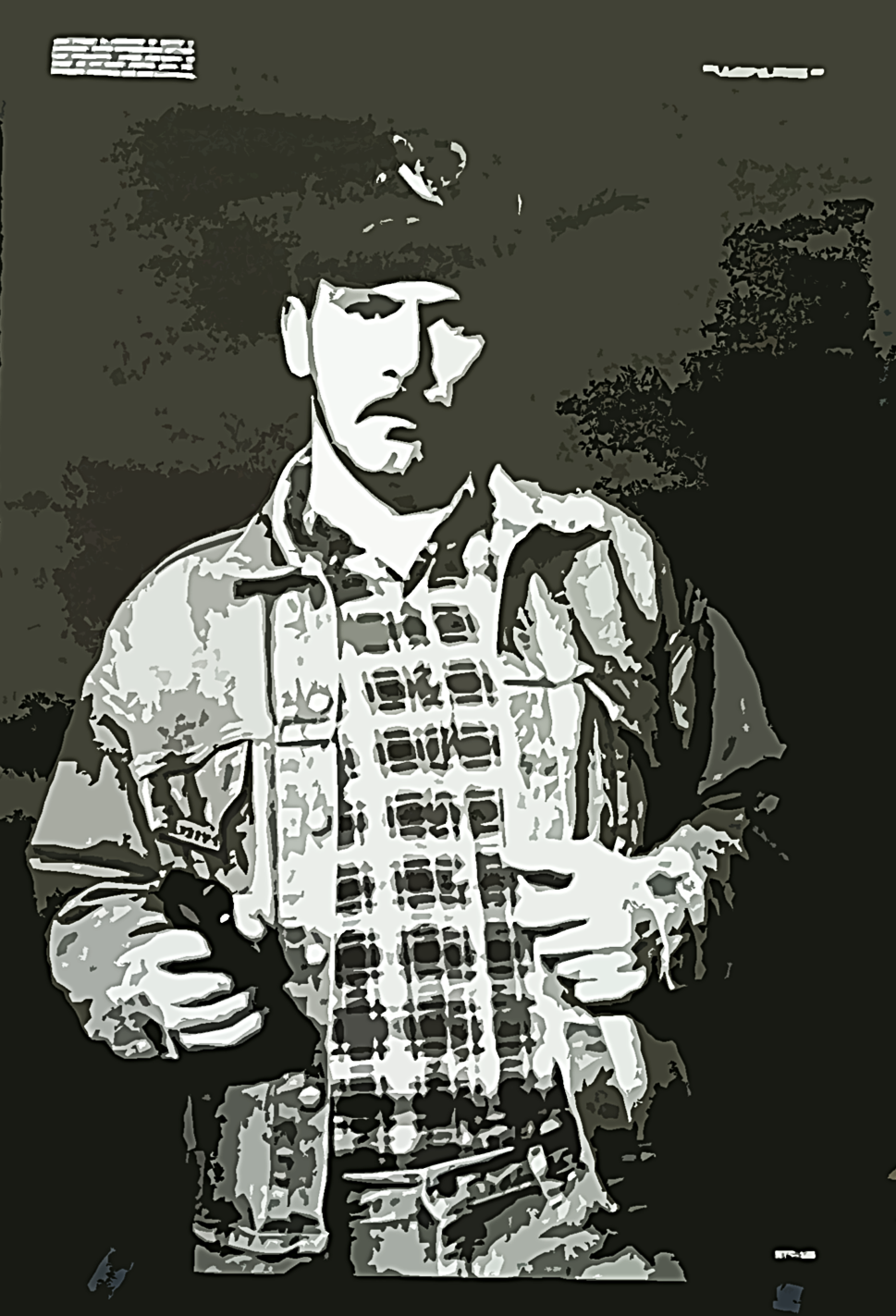 Author finds photo-realistic targets less useful because they look exactly like what they are: still photos of real people. That they occasionally remind me of people I know doesn’t help! Photo: author

In an ideal world, we could have targets that think, react, and allow us to shoot at them. Reactive scenario force-on-force training provides these elements, but it is complex and resource-prohibitive. Also, in all but the highest levels of intensity, participants in force-on-force scenarios know they might be stung by a simulator round or bruised by a paintball, not maimed or killed by a bullet, and that can affect their behavior, reducing the realism of the exercise.

I am not saying that such training doesn’t have value. But it is, at best, an occasional opportunity for most armed civilians. Further, when it does happen, it generally denies us the benefit of having to manage full-power recoil, muzzle blast, and marksmanship errors from our actual defensive gun. So when it comes down to it, most of us will do what we have always done — experience the vast majority of our defensive shooting practice on a range, using live ammunition and static, inanimate targets.

How do we make the best of such imperfect conditions? We visualize the target to represent the living, three-dimensional threat. We imagine the movement of a living assailant, remembering that what we are shooting at in front of us would only remain in that orientation for a split-second, and the longer it takes us to recover from recoil and fire more shots, the less likely those shots are to be as accurate as we see on our paper target. This is partly why shooting at a photograph of a bad guy pointing a revolver at you, seeing holes all over the paper and saying, “Hey look! I got him in the elbow!” doesn’t qualify as high-quality “training.” 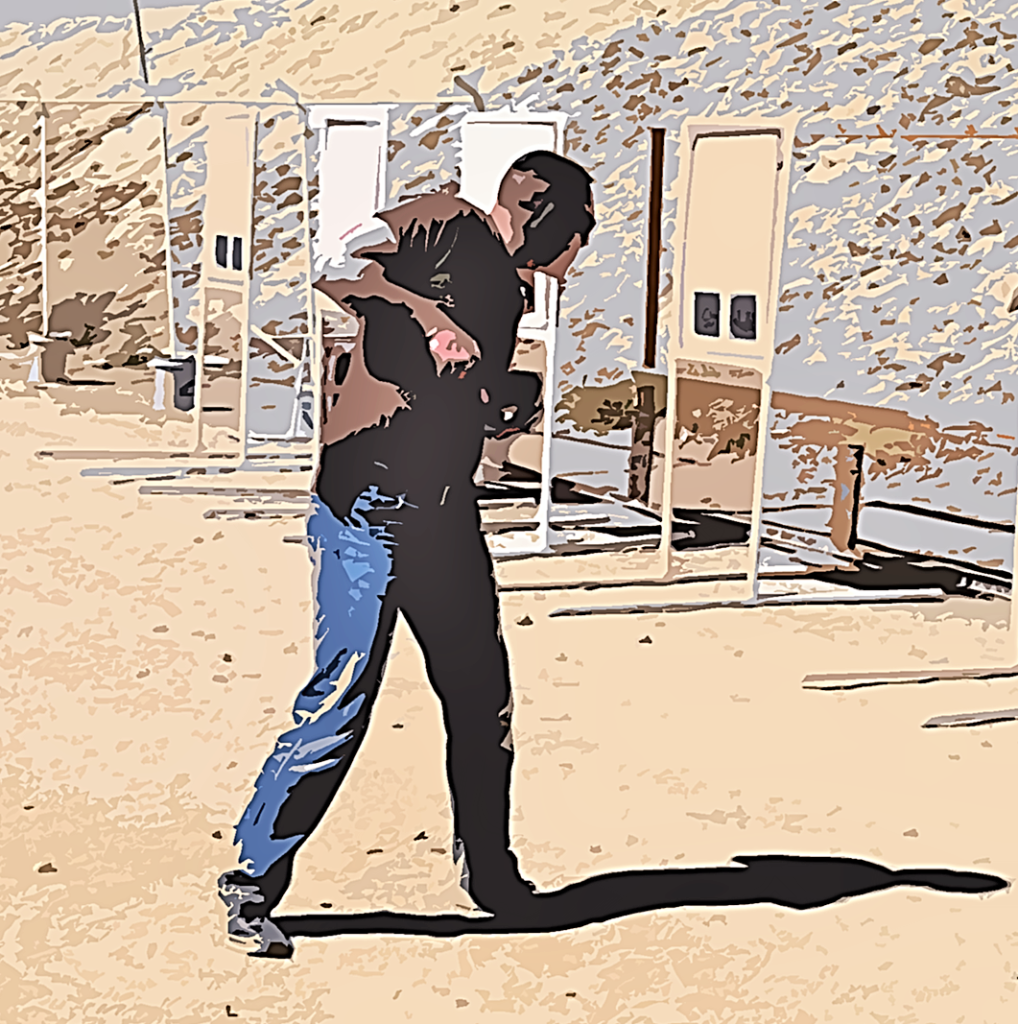 We begin (and continue) our defensive shooting training from a position where the gun is already up and out of the holster. Photo: author

Visualization adds further value if we find ourselves in a constrained practice environment. For example, I often explain to students that the value of training with real guns firing real bullets is so great that we intentionally begin our training “in the middle of the movie.” What I mean is that we are jumping into our self-defense scenario already in progress, not at its chronological starting point. This is because it would be insanely reckless to begin one’s defensive handgun training with a loaded gun, in a holster, under concealment. We must first get a handle on the mechanics of shooting the gun, to include generally safe direction and finger elsewhere but the trigger, before getting into presentation from the holster.

So we are doing our shooting by extending out from the high compressed ready position, but it is critical to understand that in reality we would not be stopped at that position — at all — while a lethal threat was present. We can instead use the power of visualization to “see” in our mind’s eye what had already occurred in our scenario. That is:

… I was walking through the parking lot with my armload of groceries … fumbling for my car keys … my cell phone started ringing …”Who the hell is calling me at 11:30 at night!?!”… out of the corner of my eye, I catch a sudden movement … a guy I don’t recognize is popping out from behind the parked car I’m walking past … I see the knife … OMG he’s right on top of me … I drop the grocery bags as I spin away … hand dives to gun … gun comes straight up out of the holster … orients toward the attacker … 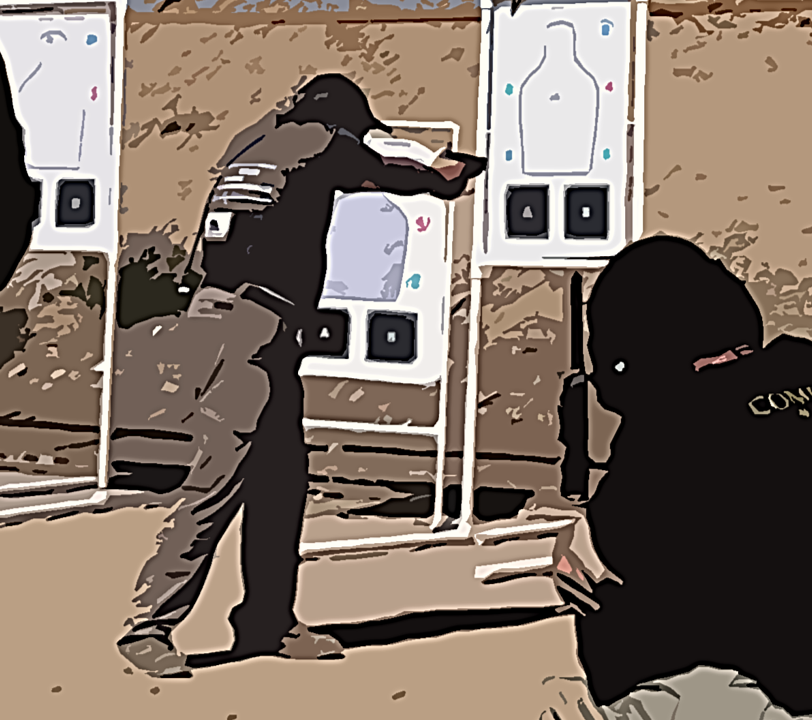 Our ability to visualize how we got to that position helps put it into the proper context. This adds value to our training. Photo: author

And now we hit the pause button on our mental DVD player. We can clearly see that we would be, for a fraction of a second, in a physical orientation that closely resembles the high compressed ready position. At this point, we can train part two of our story, the part in which we drive the gun out to full extension and fire multiple rapid shots into the high center chest of the attacker. Correctly using visualization has helped put our actions into the proper context and compelled us to act with urgency as we envision the attacker’s reaction to being shot at. Thus we have highly effective live-fire training, despite the fact that we didn’t actually draw the gun from concealment and our bad guy is a bottle-shaped phantom printed on a long sheet of paper.

As our self-defense training progresses, we will of course make good use of the holster. We will participate in some level of force-on-force training, as available. We will expand the conditions and circumstances for which we will be prepared. But when our only training and practice opportunities are at the shooting range — sandwiched into a narrow booth and where drawing from the holster is prohibited — we can hang our paper practice target and call upon our gift of imaginative visualization to add perspective and help make our training as real and relevant as it can be.