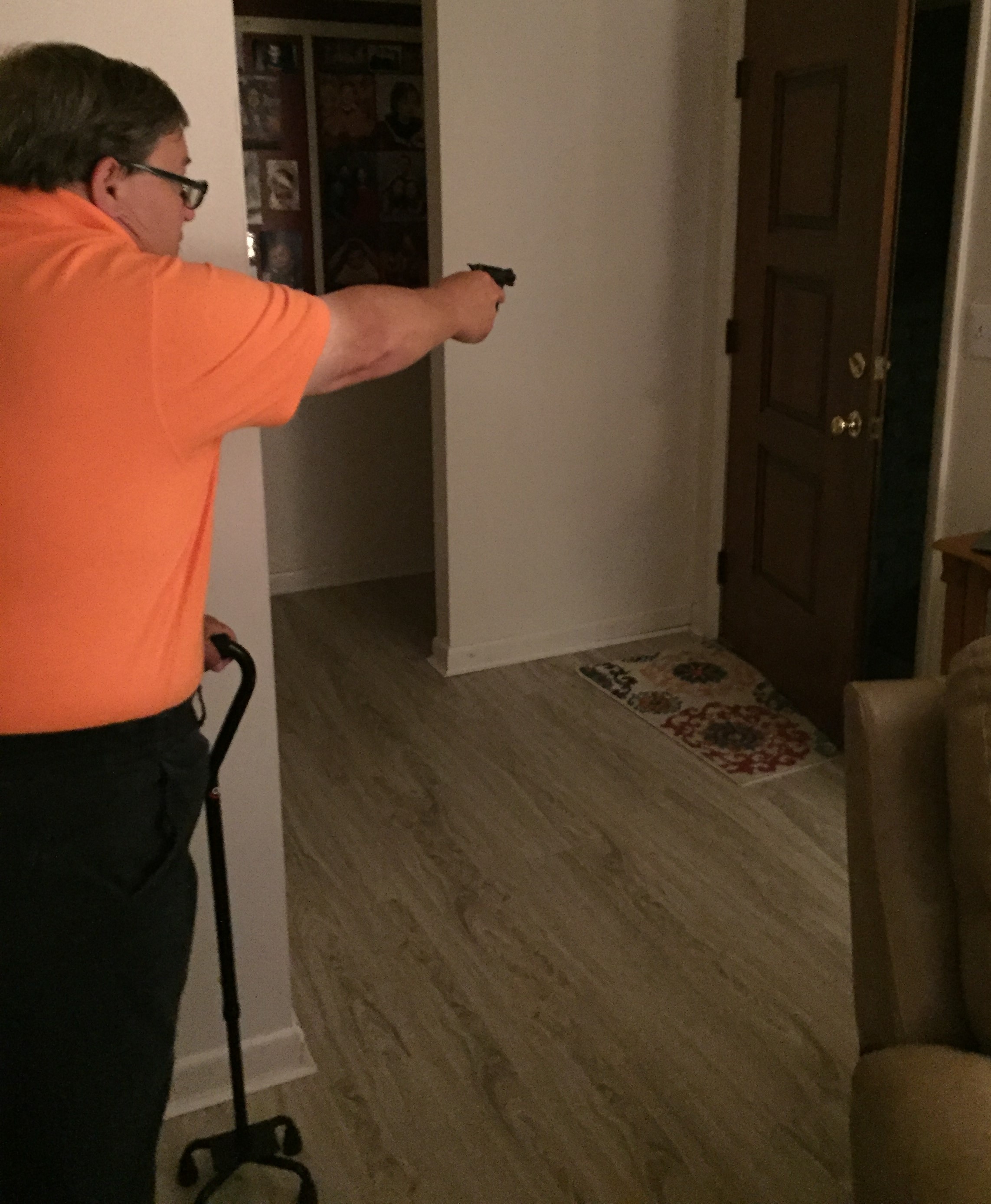 Even with shaky hands from Parkinson’s, by driving the gun out to full extension, the shooter gets a better kinesthetic alignment. This limits the shaking in his shooting hand. Photo: author

A family friend recently asked if I could help him with a shooting issue he was having. I had known for quite a while that his health had been poor and he had been in and out of the hospital. Though I didn’t know the details, I could tell this was something that had really been bothering him and that he was reaching out to me as a last resort.

He explained that for the past few years he had been suffering from a degenerative neuromuscular disease. As it had progressed, it had all but prevented him from being able to fire his defensive firearm. He was unable to pull the trigger without using two fingers (and even that was a struggle). Even loading magazines was too difficult. This new disability had left him feeling helpless and dependent on others for his and his family’s safety.

Thinking about his situation, I imagined how I would feel if I were in his shoes. This man is a Vietnam veteran who has been a responsible firearms owner all his life, has trained and practiced his skills so he could protect his family from those who might want to harm them. Now he is faced with a disease that’s preventing him from doing all that.

I immediately contacted a former student who is an orthopedic surgeon at a medical center in southern Indiana. He generously gave me some time out of his busy schedule to run through an in-depth explanation of the issues with this particular type of degenerative neuromuscular disease. After a little more research and information gathering, it was determined that my friend’s finger and hand muscles are fatiguing rapidly and preventing him from pulling the long, heavy trigger on his existing firearm. 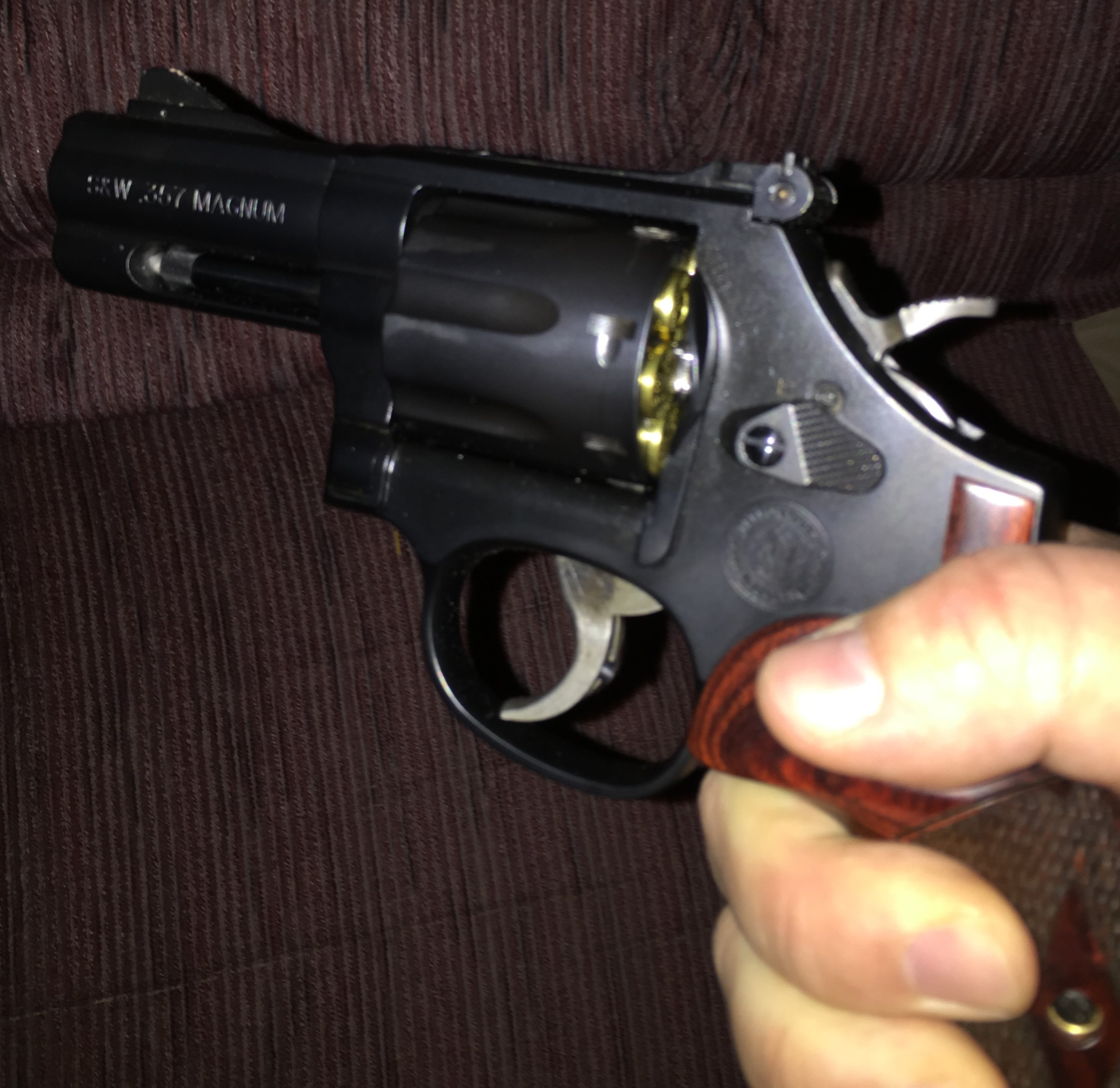 Sometimes trigger work by a professional gunsmith is required to make a firearm work for you.
Photo: author

I spoke to a few gunsmiths and found that the particular handgun my friend was using has a trigger that progressively stacked weight until the gun went bang. This particular gun reached a little over 12 pounds before it fired. Unfortunately, there are no viable aftermarket triggers for this gun, so I began researching other possible solutions.

I realized if the trigger was stacked heavier on the front end and lighter after that, it might allow his finger to avoid fatigue during the trigger stroke. After speaking to a few people about the range of adjustability in different guns, it was clear that a revolver was going to be the best solution for this situation. Not only would it solve the trigger issue, it also solved his problem of not being able to reload his own magazines.

My super-talented gunsmith, Jordan Jackson at Black Bullet Firearms, was able to do exactly what needed to be done with an S&W Model 442 revolver he had available. He did an excellent job on the gun and smoothed it out to where it stacked at the beginning and lightened up at the end. Due to donations from some very generous friends and family, we were able to gift the gun to this gentleman, ship it to his local FFL, and pay for the transfer.

When I returned from the NRA Annual Meetings, this card had been delivered to me. It says: 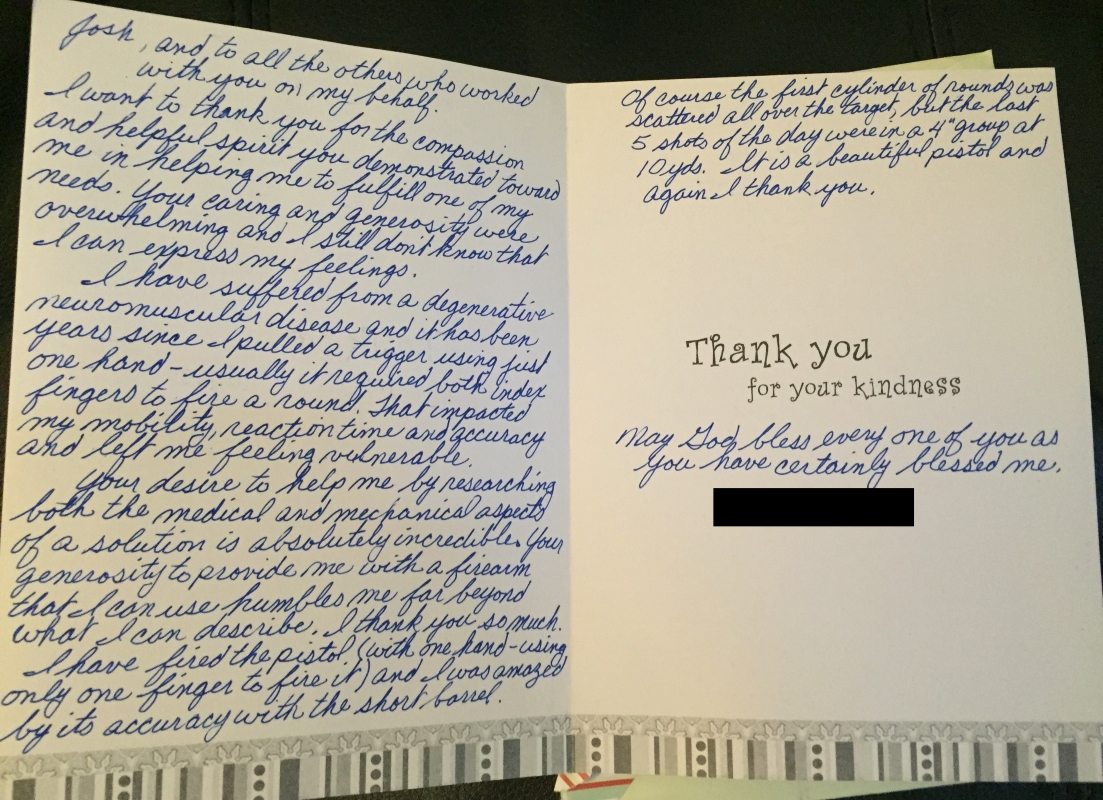 Friends, I am afraid many defensive firearms instructors have failed our elderly and disabled comrades. These potential students are not going to take a class where they have to complete an archaic FBI qualification course that requires people to shoot from kneeling at 25 yards. Many of these people would be hard-pressed to get to a kneeling position. And if they got there, getting up would be a real issue.

As instructors, it is our job to prepare them for self-defense within the constraints of their abilities. Not everyone needs to be trained to the standard of our FBI Special Agents. We don’t need to be putting shot timers on Grandma and telling her she has to kneel and shoot at implausible distances in 15 seconds. Does she fail if she does it in 16 seconds? That’s just absurd! 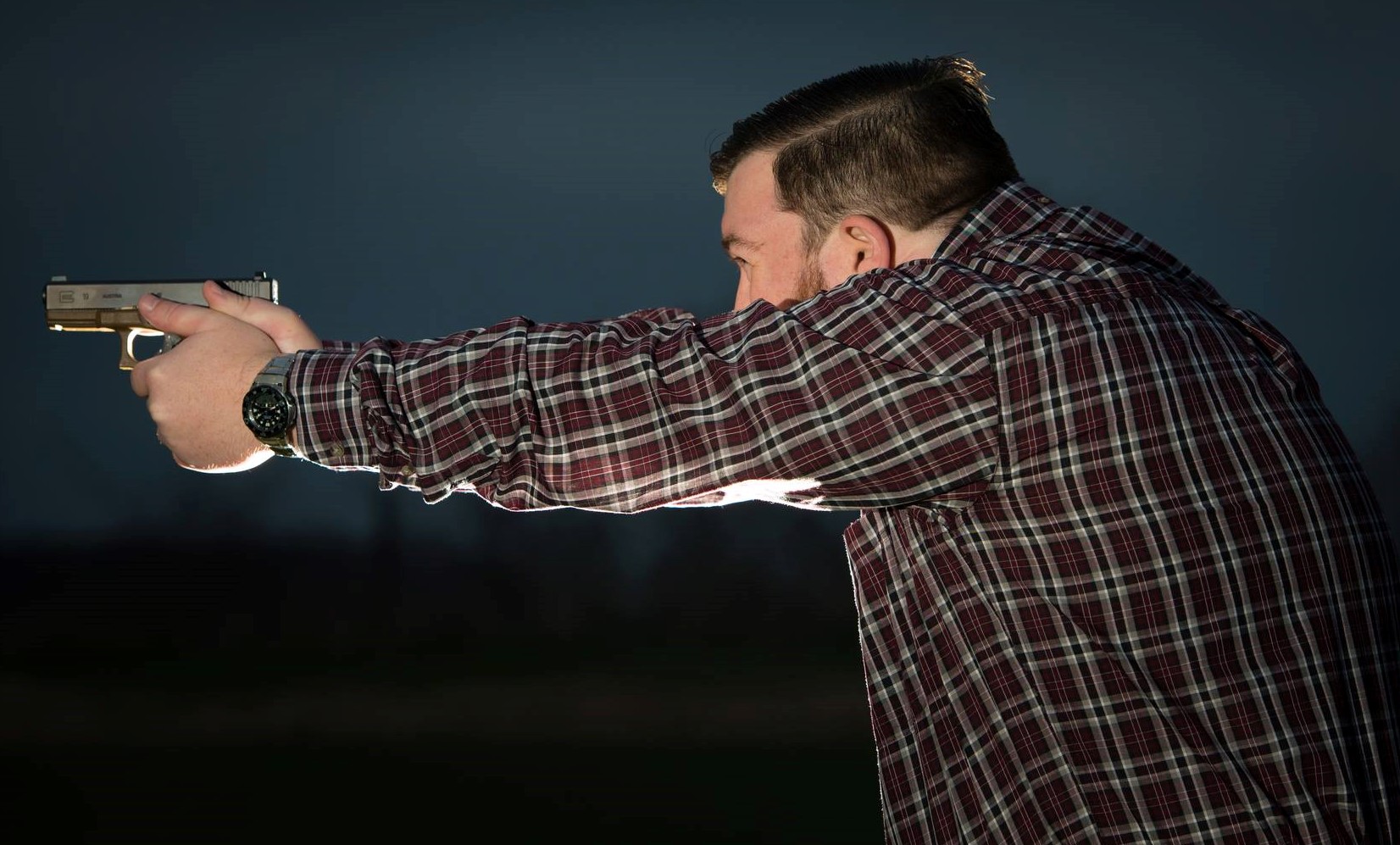 Author demonstrates how to drive gun out to full extension. Photo: author

It is now abundantly clear to me that we are failing a large portion of our demographic. The baby boomers are getting older. Men and women are coming back from a decade of war. We have an obesity epidemic affecting a large percentage of our population. Do those people not deserve to be taught to defend themselves to the best of their abilities? Think about it. The self-defense industry as a whole seems to target 20- to 40-year olds, able to go rolling in the mud and complete FBI level tactical training.

Disabled shooting is not an oxymoron. If you are one of the many among that group of people—like me, who has the knees and back of an 80-year-old at the age of 37—you are not alone. You don’t have to feel vulnerable. Reach out to instructors who get it!

If I can help you, please feel free to e-mail me at jgideon@nosofttargets.com. Just because you’re not in peak physical condition doesn’t mean you have to be helpless. You can also find qualified instructors who want to help right here on the Personal Defense Network.