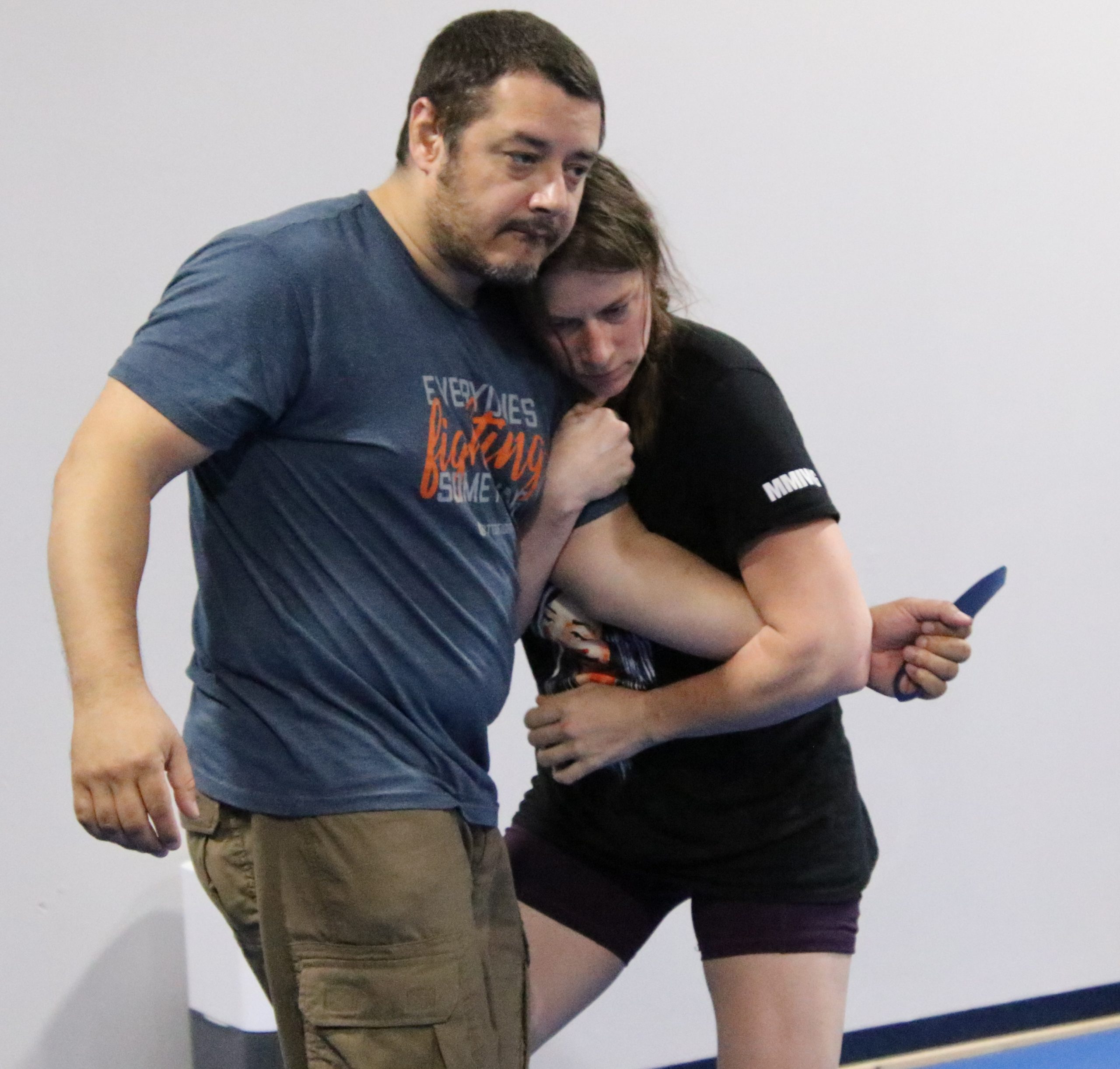 In the self-defense, martial arts, and tactical spaces, there is perhaps nothing more polarizing than knife attack defense. The industry loves cliches like:

and on and on. Like most cliches, they contain elements of truth but are generally oversimplified, misunderstood, misapplied, or sometimes, just utter BS.

Anyone who has spent much time with me knows that when it comes to interpersonal violence, I find knife attacks and threats the most frightening to deal with, and I spend a lot of time looking to avoid them. But if avoidance is not an option, there are a few things I believe everyone should know — about the weapon, the user, and the defensive response.

Edged weapons rarely fail. Unlike firearms, they have very few, if any, mechanical components. Blades do not run out of ammunition. Blades do not have a “line of fire,” as most of what is exposed is dangerous, and once presented, blades are always live. Unlike firearms, edged weapons are often weapons of convenience, gleaned from the environment during a violent encounter, and are therefore more prevalent: knife, screwdriver, scissors, pen, machete, and more. Furthermore, edged weapons are quite common in crimes of passion/emotion, and we generally see numerous stabs and slashes in an attack.

Here’s the dirty little secret that martial artists and knife nerds don’t want you to know: You do not need to be skilled with a knife to do massive damage. What you need is intent. Everyone with a knife has the potential to be deadly. The mentality of someone willing to use a knife as opposed to a gun, for example, is pretty stark. A firearm is (primarily) designed and intended as a distance weapon. The user is not required to touch the victim/target. 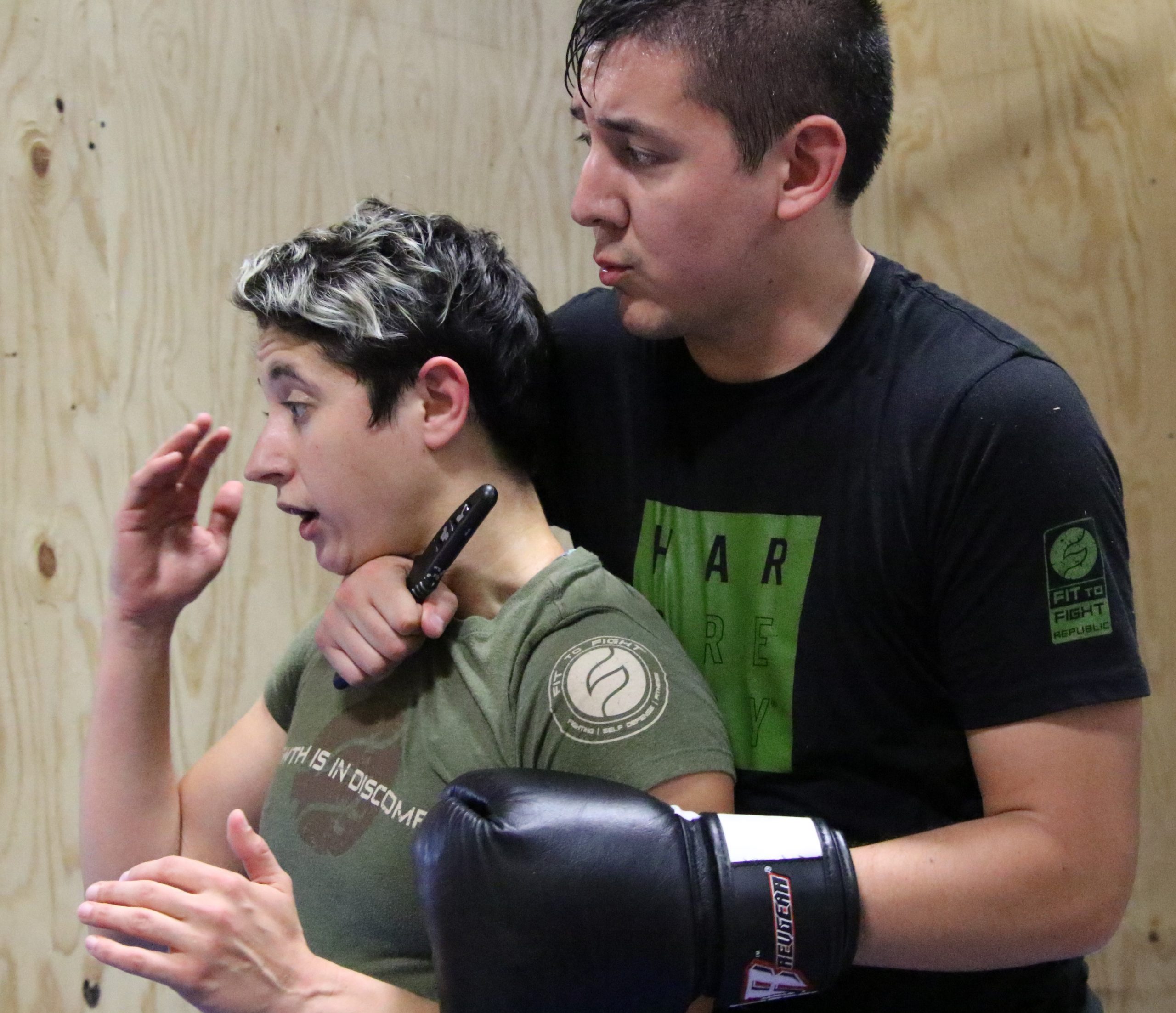 With a knife, the user must be willing to run a piece of steel through skin and muscle and bone and tendon and whatever else might be in the way. This is someone comfortable with (at least with the idea of) getting bloody, and feeling the life leave another human. This is not “required” with really any other weapon. This is an incredibly important thing to remember when dealing with a knife attack or threat.

The defender must be willing to meet such an attacker with comparable or superior aggression and intent. It also turns out that most people have handled edged weapons, in one form or another, the majority of their lives, so it is something very familiar to them.

THE DEFENSIVE RESPONSE (NOT NECESSARILY IN THIS ORDER)

1. Be first: At the first sign of imminent violence, act first, either by de-escalating, leaving, striking, or controlling the attacker. If you don’t know how to fight (see #4), you likely will not be great at de-escalating.

2. Disengage ASAF: As soon as feasible, create an opportunity to safely leave. The more time that passes, the more variables increase. This tends to favor the attacker.

3. Use force multipliers when it makes sense: If you carry a weapon, train with it. Know when to use it, and when it is more of a liability than an advantage. Don’t assume that just because you carry a gun, for example, it means you are somehow impervious to knife attacks. Empty-hand skills are imperative. If you doubt that, check out the infographic below. 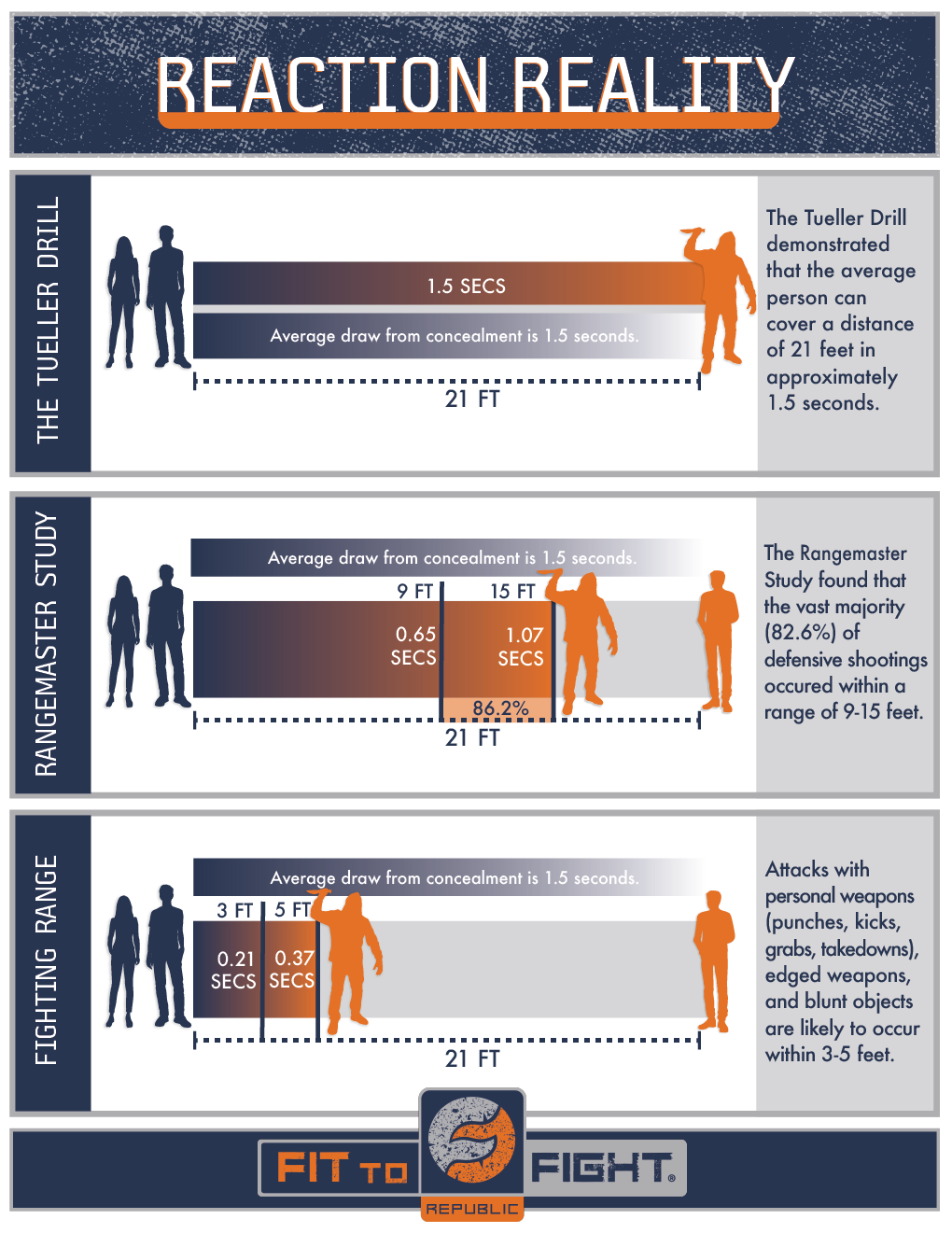 4. Learn to fight: If you cannot fight someone who is unarmed, there are no special techniques designed to make you a super-secret ninja squirrel knife fighter (not even for a special one-time price of $49.99, if you act today). You need to wrestle, box, kickbox, do jiu-jitsu or judo, or all of them…you need to learn to fight. “Self-defense” is a marketing term.

5. Get control: If you took the “learn to fight” advice, you will understand that “two on one” is the only control that really matters. Fights are about winning moments in time, and control might be a fleeting moment, but to have it and win it, you need two hands/arms/legs on the one holding the knife. Anything else and you are a wrist release away from being gutted.

If Fit to Fight® (the self-defense training organization I founded and operate) were a religion, “2-on-1” would be its “Amen.” The importance of 2-on-1 control is emphasized throughout our system when dealing with clinch training and especially in weapons defense (and retention).

While we use the term “control” with a grain of salt, when it comes to defending a knife attack, it is important to understand the common responses from the attacker, to that moment in time, should one achieve it:

When creating responses to common attacks, it is essential to acknowledge the likelihood of one or more of these reactions, in order to mitigate their odds of success. Variable control and the ability to fight, using a principle-based approach that encourages decision making, are paramount to enhancing survivability.

This is what the Edge of Reality program, which I created and instruct, is: a problem-solving, principle-based fighting program designed to allow students to think and adapt, based on their assets and liabilities. It is not a collection of techniques or a preset response to “common attacks.” 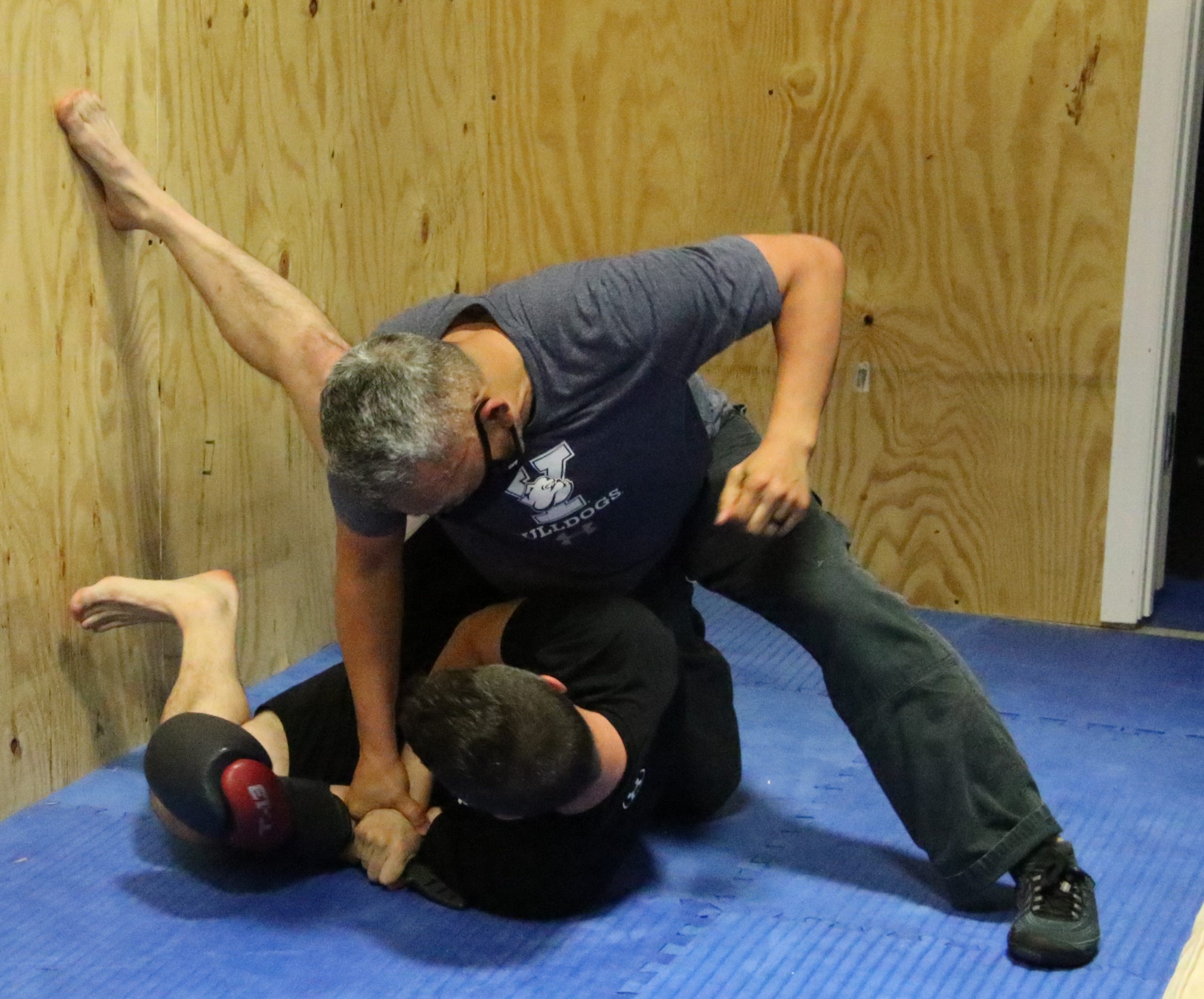 Student is taken down during training at Edge of Reality course at Fit to Fight® HQ. Photo: Sandy Lawrence

6. Use your striking to set up your wrestling and your wrestling to set up your striking: You might hit them in order to gain your two-on-one control, then use that control to deliver counterattacks, or you might get control in order to counterattack, but these delivery systems should not be mutually exclusive. You need to learn how to use one to assist the other, or to gain access to your force multiplier and make sure it stays yours.

7. Forget about disarms: Any disarms or takeaways should likely be incidental. They should primarily happen as a result of your counterattacks, not because you attempt to strip the knife from the attacker. First, disarming techniques are almost always very fine motor oriented, and second, they ignore the real problem: If the attacker is still upright and holding the knife, he is still fighting, and you are busy trying to take a knife instead of fighting back. Becoming fixated on the weapon instead of the person wielding it is incredibly dangerous. Being weapon centric, either from an offensive or defensive perspective, ignores the reality of the situation: One human is fighting another, and without human involvement, the weapon is a non-issue.

If at all possible, avoid bad places and situations, and do not engage someone with a knife unless you have no other viable options. But since this is not always possible (we had a machete-wielding attacker on a train last year in Charlotte), keep in mind that the variable you ultimately control is you. The time and energy you put into learning to deal with such encounters are your responsibility, and might be the only things that keep you alive should things get bad. (Good) training matters. Prepare to protect what matters most.