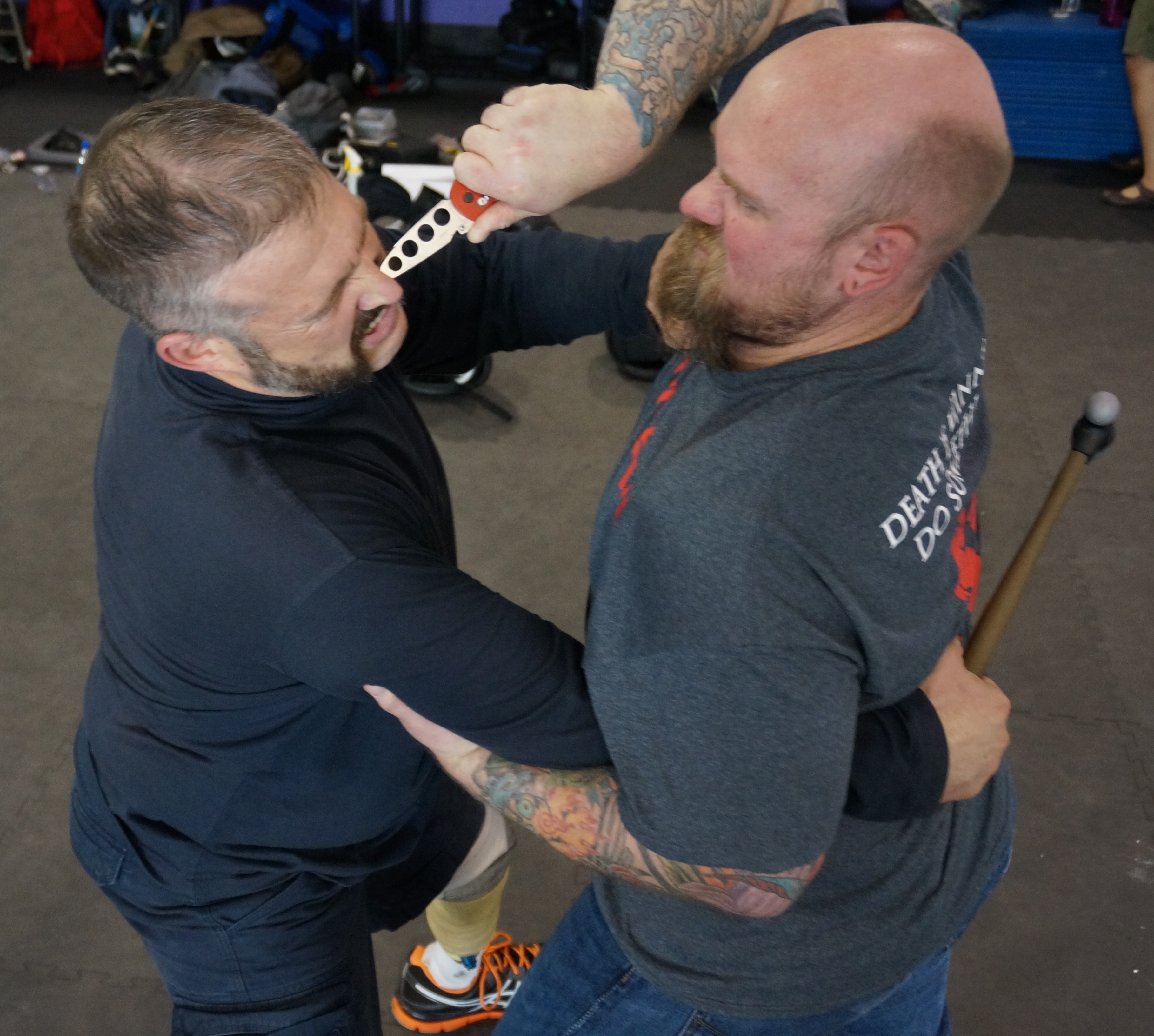 Why do people fear knives more than guns?
Photo: author

When I teach my defensive knife courses, at least one student always says, “I’d rather defend against a handgun than a knife. Knives scare me more than guns!”

I’m sure you have also heard it and perhaps have even said it yourself. The perception that knives are more intimidating than guns appears to be common. It intrigues me because it clearly influences the students’ mindset, which in turn reduces their ability to defend themselves effectively.

Self-defense programs, especially those that incorporate weapons, must be designed to develop the appropriate mindset and resolve in the student so the tactics can be applied decisively. When students are taught tactics alone, disregarding the psychological aspect of defending against and using a weapon, the exercise is futile and sets the students up for failure. As an instructor, I feel a strong responsibility to research the fear-based response to knives so I can help my students manage that fear successfully and become better able to protect themselves and their loved ones.

Fear can have a positive effect on our survival. Unfortunately, if we cannot manage it, it devolves into anxiety and panic. Panic, on the other hand, has a detrimental effect on our survival because it causes wildly irrational thinking and behavior. The more clearly the students understand and articulate the origins of their fear of knives, the less this fear will be able to control them.

In this three-part article, I will share the research I’ve conducted on the emotional components of knife defense, my understanding of why most people seem to fear knives more than guns, and how to change this mindset through training. While reviewing this information, be aware that it is not meant as the final word on the subject, but rather as a starting point for further research and discussion. I hope you will find it helpful. 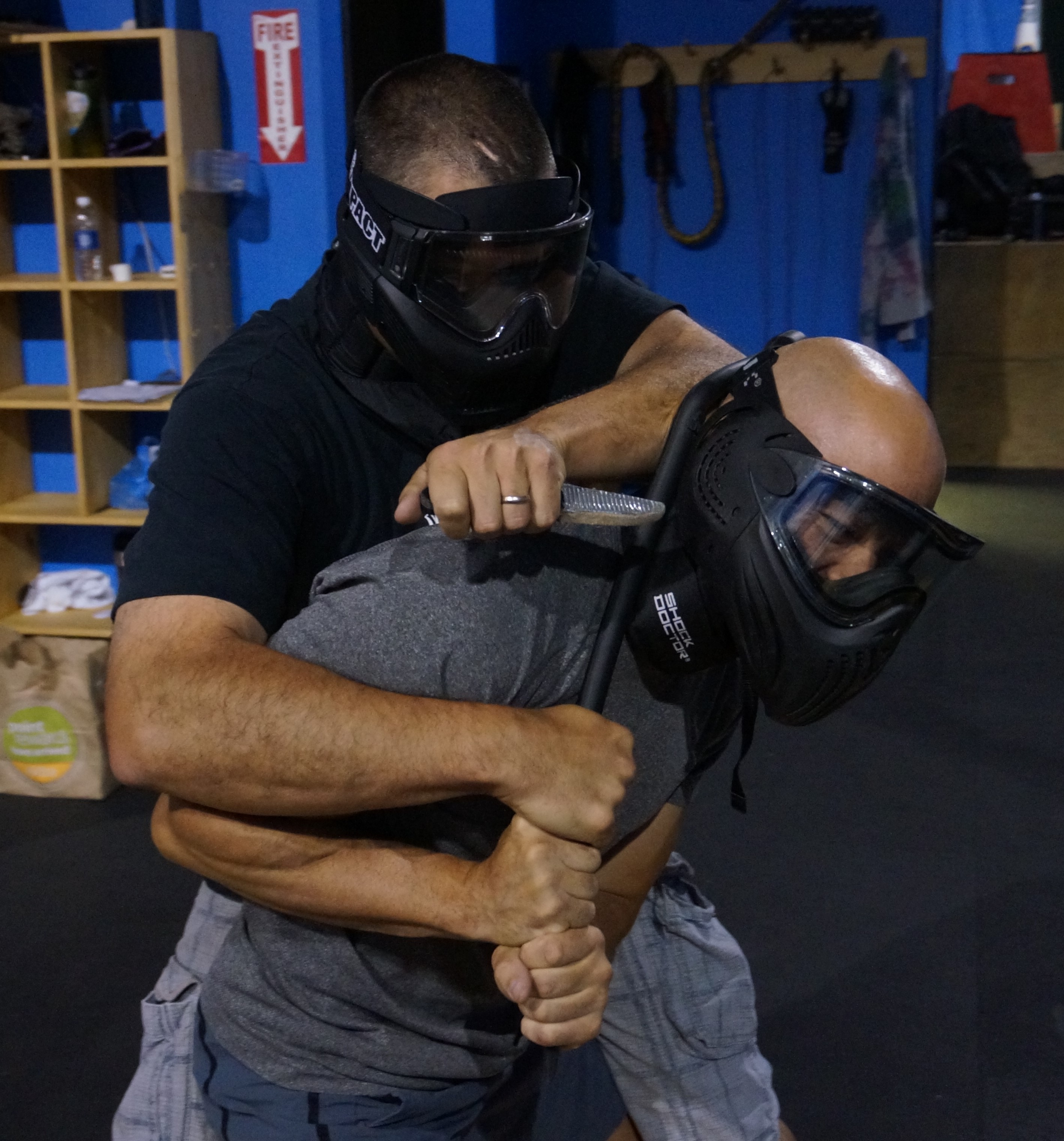 If you are a student of self-defense and train with both knives and firearms, you are probably aware that a handgun is a far more efficient tool than a knife:

Yet, on an emotional level, to most students the thought of a blade coming toward them trumps all that!

The question is: Why?

Below, I present several hypotheses that have been formulated about this phenomenon. I explore each hypothesis and provide thoughts and expert opinion.

If we look at the fear of knives from a survival instinct perspective, our response to the danger of a knife attack is likely embedded in our genes from millennia of natural selection. Knife defense is not a new phenomenon. Human beings have defended against blunt objects, sharp objects, and blades for far longer than they have had the need to defend against firearms. The first recognized edged tools were developed during the Stone Age, approximately 2.5 million years ago, when people began to fashion simple hunting tools from flint and obsidian.

Firearms, on the other hand, have only existed for a few centuries. Could this be the reason most people have a much stronger aversion to knives? 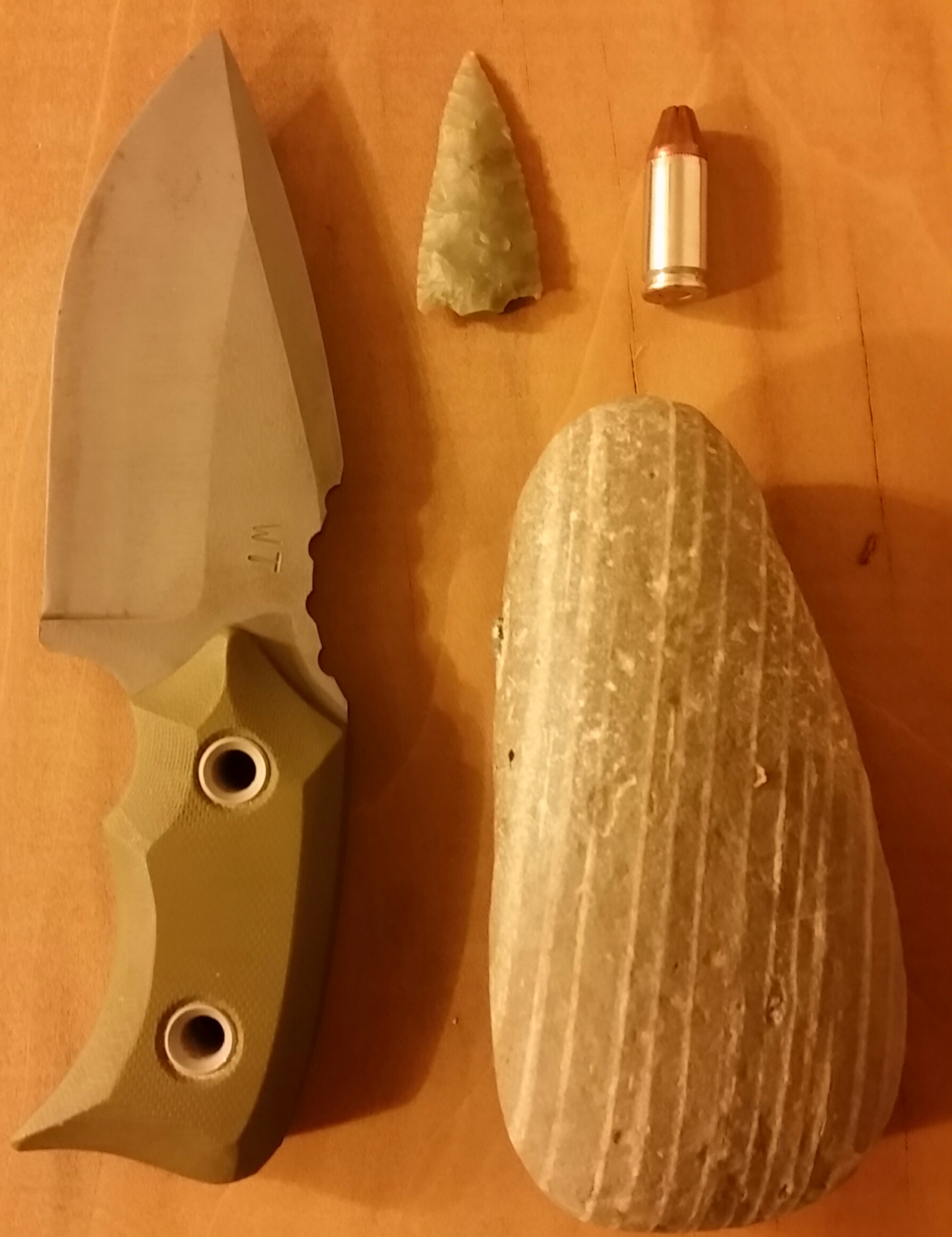 It doesn’t matter the weapon — our limbic system reacts to all of them in the same way. Photo: author

I have to admit that this line of reasoning made sense to me until I read an email conversation between Rob Pincus and Dr. David Geary (The Origin of Mind, Author 2005) that Rob shared in his book Combat Focus Shooting: Evolution 2010 (p. 87). In short, recent research shows us that once the brain learns to recognize the firearm as dangerous to our survival, the limbic system reacts to it just like it would to other dangerous stimuli. The brain does not significantly differentiate between evolved and learned dangerous stimuli.

Another factor that may affect a person’s response to a knife threat is a widespread familiarity with the amount of damage a blade can inflict. People use knives every day for a variety of tasks and are aware of their capabilities. Most people have cut themselves by accident while cutting vegetables for dinner or opening a well-sealed package. We are familiar with the effect a blade has on flesh, not only cognitively, such as for the imagined effect of getting shot, but on a more intimate and emotional level. When you last cut your hand, do you remember the sound the knife edge made on your flesh — no matter how big or small the cut — the warm, bright blood, the stitches, and the pain? Yes? You are not alone: most people hold onto such memories, likely because of the value of avoiding the danger in the future.

This idea gained more traction after I read an article by Dr. Karl Albrecht entitled “The (Only) 5 Fears We All Share” (Psychology Today, March 2012). Dr. Albrecht makes some interesting points that are pertinent to our discussion:

I propose that the fear of mutilation provides no major distinctions between the fear of getting shot and the fear of getting cut or stabbed. Interestingly, Dr. Albrecht discusses President Franklin D. Roosevelt’s famous quote: “The only thing we have to fear is fear itself.” He explains that the idea of fearing our fears becomes less strange when we realize that many of our avoidance reactions are in response to the memories of fear. 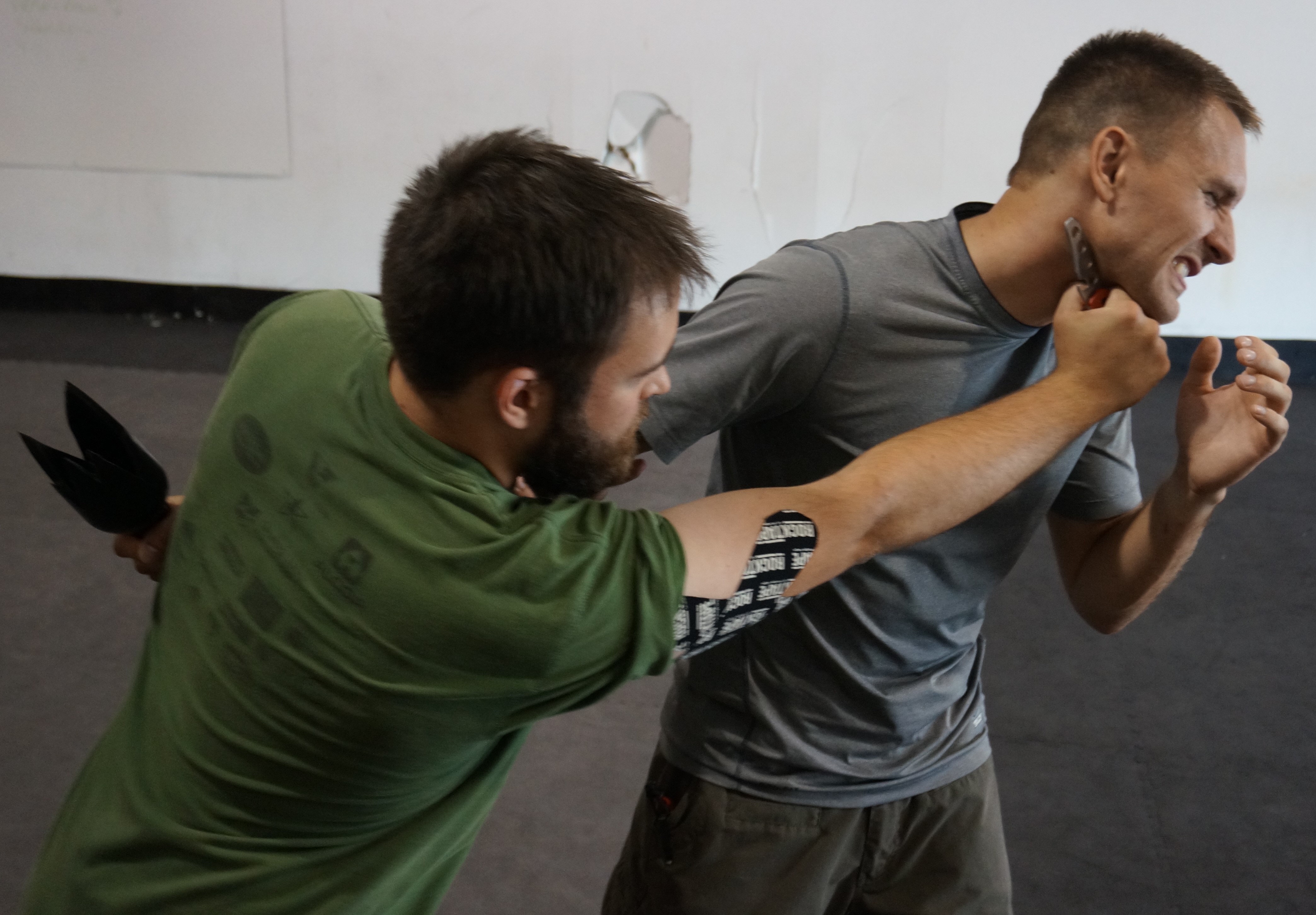 Students’ memories of being cut with a knife rise to the surface during knife defense training.
Photo: author

So Far So Good, Or So I Thought!

One day I was discussing some of these ideas with a friend who, in the course of his long career as a Special Forces soldier and armed professional, had been shot and stabbed multiple times on separate occasions. Although the physical damage from his gunshot wounds was, on average, much more severe than the damage he received from his knife wounds, he confided that he too was more afraid of the knife than the gun. He actually gets uncomfortable around knives, even when people at his work grab their pocket knife to carry out any mundane tasks. He gets a strong emotional reaction with increased heart rate and hypervigilance. Yet he still trains regularly with firearms, both on his own and with other students, with no adverse emotional reaction.

Here is a guy who has fear memories both of getting shot and getting stabbed. He understands that gunshots are generally harder to survive than knife wounds … and he still fears the blade more. He’s not alone in this. I’ve talked with a few other individuals with similar backgrounds and experiences, and most share his emotions. Although these individuals are too few to gain meaningful conclusion from, their experience makes me wonder what else influences our fear of the knife.

Hypothesis 3: The Knife Is Personal

Something else that piqued my curiosity was the fact that once the class progresses to where the students start to apply on a training partner the knife defense tactics they have learned, nervous laughter can be heard, and something along the lines of “Gross! I’d rather use a gun to defend myself than a knife” is another oft-repeated phrase.

At first, this statement seem at odds with “I’d rather defend against a handgun than a knife. Knives scare me more than guns!” After all, if someone deems a certain weapon more dangerous, why wouldn’t they want to use it to defend themselves?

But when you analyze the two statements more in depth, you realize they stem from the same emotional issues. The blade is a much more intimate tool than the gun. It is used at contact distance. It’s messy and bloody, the very definition of gruesome. As such, the thought of defending against it inspires more fear, and the thought of using it on another human being elicits more revulsion. For our purposes, it is imperative to understand the origin of this revulsion to using a knife on a fellow human being.

It is a well-known fact that most people have an innate reticence toward hurting and killing other human beings. There are a few evolutionary biology theories about this, with the common denominator being that since we have a better chance to survive and procreate when we are part of a group, we needed an innate set of emotional responses that would help us manage our aggressive behavior and inhibit our violent tendencies to better fit in with our family, tribe, society.

“Evolution dealt with this species-threatening conflict between our violence and our close-knit social life by building guilt, shame, and anxiety into our genes. These inhibiting emotions were needed prehistorically to control our self-assertiveness and aggression within intimate family and clan relationships.” (Guilt, Shame, and Anxiety: Understanding and Overcoming Negative Emotions, Peter R. Breggin, M.D., 2014)

In his book On Killing: The Psychological Cost of Learning To Kill in War and Society, Lt. Col. Dave Grossman writes at length about this widespread resistance to killing and analyzes the psychological differences between killing at different ranges:

“The link between distance and ease of aggression is not a new discovery. It has long been understood that there is a direct relationship between the emphatic and physical proximity of the victim and the resulting difficulty and trauma of the kill.”

And with different tools: 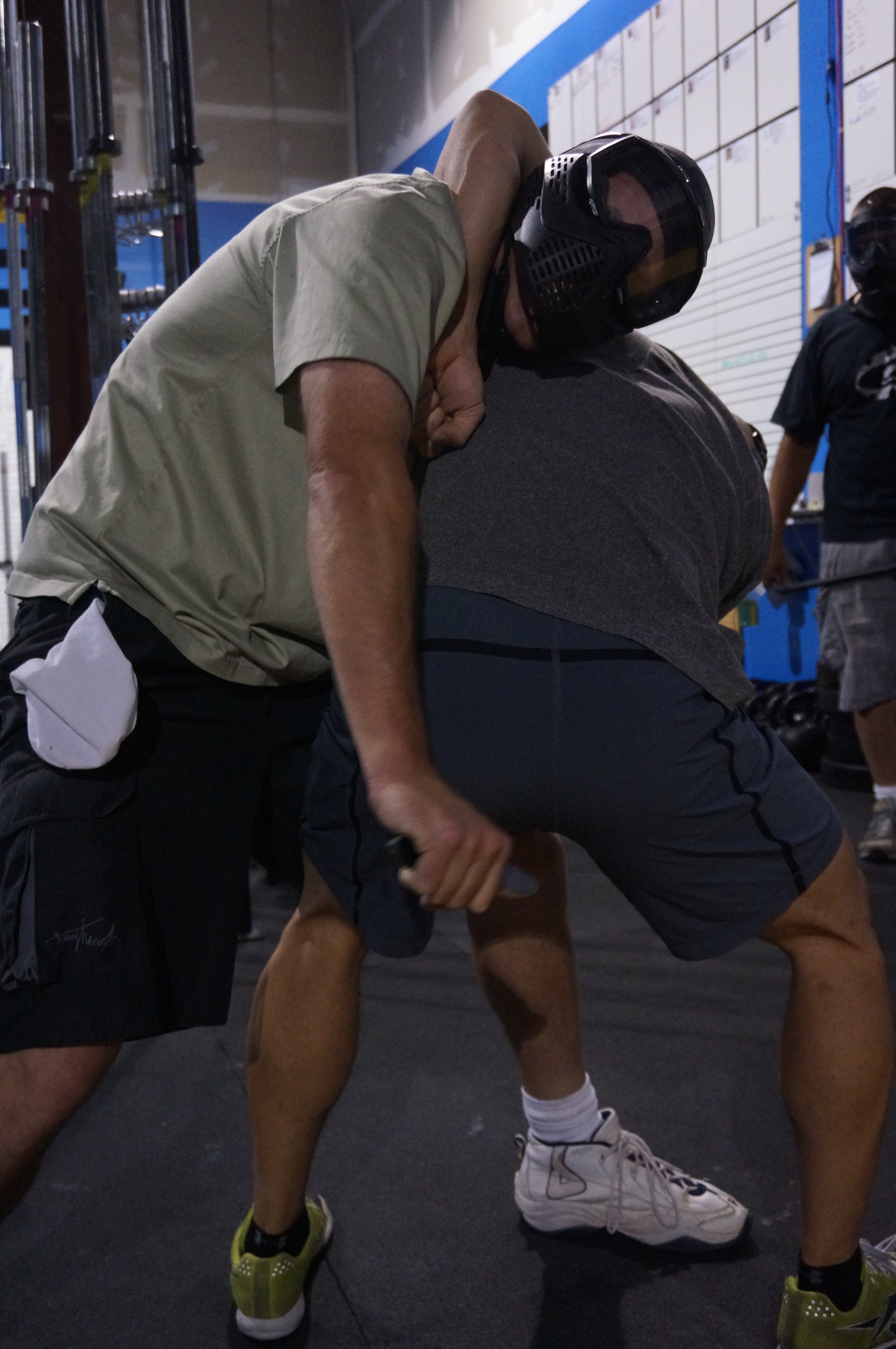 “The second corollary to the distance relationship is that it is far easier to deliver a slashing or hacking blow than a piercing blow. To pierce is to penetrate, while to slash is to sidestep or deny the objective of piercing into the enemy’s essence. For a bayonet-, spear-, or sword-armed soldier, his weapon becomes a natural extension of his body — an appendage. And the piercing of the enemy’s body with this appendage is an act with some of the sexual connotations we will see in hand-to-hand combat range. To reach out and penetrate the enemy’s flesh and thrust a portion of ourselves into his vitals is deeply akin to the sexual act, yet deadly, and is therefore strongly repulsive to us.”

Incidentally, modern homicide statistics seem to support this notion by showing that when these inhibitions are absent, as in people with marked sociopathic and psychopathic characteristics, the opposite behavior is true: “Multiple stabbing occurs significantly more frequently in sex-related homicides than in other homicide types.” (Naftali Berrill, Forensic Psychologist)

About the use of a knife during combat, Lt. Col. Grossman explains that “As we bring the physical distance spectrum down to its culmination point, we must recognize that killing with a knife is significantly more difficult than killing with the bayonet affixed to the end of a rifle.”

It seems that this disproportionate fear of the knife is based on an emotional bias fueled by familiarity with the tool, prior negative experiences with its capability, and our innate emotional and psychological responses to hurting other people or being hurt, which are exacerbated by close distances and by using a blade.

Interesting. But knowledge alone, without a way for it to influence our training methodology, is pretty useless.

In Part 2, we’ll look at how to successfully integrate this knowledge into our knife defense training program in order to mitigate these detrimental effects to our ability to defend ourselves as efficiently as possible.