Concerned adults taking the initiative and responsibility to earn their concealed carry licenses.

December 15, 2012, 3:30am: As I lie awake in my bed at the fire station, my mind is racing trying to comprehend the tragedy that took place yesterday in Newtown, Connecticut. Having been in EMS/Fire for over 20 years, I have worked countless murder scenes and witnessed human beings at their absolute worst. I have seen and dealt with individuals who were, in my mind, pure evil. I try to fathom not only what the parents are feeling, but also the first responders’ thoughts and grief, since they had to deal with multiple victims. Most of the public is shielded from the realities that go on every day around us. As first responders (police, fire, and EMS), we accept the burden and responsibility of dealing with society’s “problem children” so others do not have to. Yet, with all my experience, the one thing that still breaks my heart is when the lives of innocent children are taken.

I believe the “sick” or “evil” factor is incomprehensible to those who kill or abuse children. To me, there is no healing or rehabilitating those individuals. They are simply screwed up beyond repair, period! Being a father, husband, and civil servant, it is tragedies like Newtown that empower me to continue teaching individuals in the self-defense industry. But this article is not about my business or me. It is about our society as a whole, and the direction in which we are heading.

As I read all the media propaganda and emotional backlash on personal media outlets, I am amazed at how many people focus on pointing fingers instead of considering the victims and families affected by the events. I am a pro-gun Second Amendment supporter 100% and will fight for the rights that were given to us by our forefathers. But this tragedy is not about being pro- or anti-gun. It’s about the society we live in and what we as individuals can do to keep things like this from happening again.

The people I surround myself with are those who risk their lives for the preservation of life and property. Every time I put on my uniform or walk out my door as a civilian, I am willing to put my life on the line for a total stranger if the need arises. Not only did I take an oath to serve my community, but as a human being, I feel that I have an obligation to help people whose lives are in danger. Granted, I have a fire inside me that burns intensely to do what I do. But that desire is useless if I’m not proactive. Not everyone is wired to do what I do. But we are all capable of being responsible for our own safety and the safety of our loved ones.

Teaching -- imparting your skills and knowledge to others -- can help make society a responsible and safer place for everyone.

At a class I took a few years ago from Tony Blauer of Blauer Tactical Systems, he stated, “Apathy and denial will seal your fate. The victim mindset is often one born of apathy and then imprisoned in denial. The key to action — the remedy for hesitation and emotional inertia — is to simply accept the situation and move on.” I realized what he said is absolutely true. In all my dealings with violent incidents, people have had the same responses: “I never thought it would happen to me … I can’t believe this happened to me … This never happens in my neighborhood,” and so on. In essence, pull your head out of your rear and accept the fact that bad things can happen to any of us at any time. The first steps to not becoming a victim are to change one’s mindset and then do something about it.

What I have noticed in society today is that people do not want to accept the fact that there are evil people among us all. There are bad people everywhere and they will always prey upon the weak. I don’t care if you live in the wealthiest part of town or a mud hut in a Third World country. And it is not about guns, as plenty of bad people have killed thousands of innocents without using firearms. For example:

* Timothy McVeigh: detonated a truck bomb in front of the Alfred P. Murrah Federal Building in Oklahoma City on April 19, 1995. The attack killed 168 people and injured over 800.

* London Bombings: On the morning of July 7, 2005, terrorists detonated four bombs on public transportation vehicles. Fifty-two civilians and the four bombers were killed, and over 700 more were injured.

* China: Early in the morning of March 23, 2010, Zheng Minsheng walked in front of an elementary school in Fujian province. Wielding a knife, he attacked students, killing eight and wounding several others.

What Can We Do?

As you can see, history is full of examples of the evil that coexists with us. In some of the above incidents, little could have been done to stop it. In others, simple intervention could have or did make a difference. So knowing that evil lives among us, what can we do? It’s simple: be proactive and become a responsibly armed citizen. I am not talking about taking up arms. I am referring to arming yourself with the knowledge that can make a difference in a potentially violent confrontation. Our minds are the true weapons in protecting ourselves.

Getting fundamental reality-based training from an accredited instructor is crucial when it comes to being properly prepared.

A gun, knife, chair, pencil, one’s hands, or one’s ability to verbally de-escalate a situation are tools that we can use to gain an advantage when resolving a dangerous situation. Society as a whole has become dependent on others to solve their problems. People have a false sense of security that when something bad happens, the police will magically appear and the bad guy will be apprehended. The fact of the matter is that by the time police arrive, the deed and the damage have already been done. Violence is something that happens quickly and brutally. In most cases, the act in itself takes only seconds to a few minutes at most.

This is where being a trained individual comes in. Attaining knowledge and skill sets can make the difference between living and dying for yourself, your family, friends, and even strangers. I’m referring to simple awareness skills, fighting mindset, verbal de-escalation techniques, hand to hand self defense, legally carrying a firearm, and studying how bad guys operate. This knowledge is what makes a difference. This knowledge is what allows us to find the best possible solution to a violent incident instead of being a helpless victim with the “deer in the headlights” reaction. 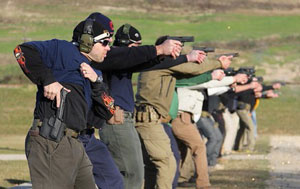 If one chooses to carry a firearm, training should be a lifelong and never ending commitment.

Granted, some people with absolutely no training have acted in their own defense and walked away from bad situations. I consider that simple luck. More often than not, luck will not be on your side against a determined adversary. Personally, I want to dictate the outcome of a bad situation if at all possible. You see, evil does have a weakness. Evil people are generally cowards who hide behind intimidation and violence. When that intimidation and violence do not have the intended effects, evil becomes weak and beatable. The battle of good versus evil has always been with us and always will be. It is never ending.

Where does that leave us as a society? I believe we have two choices. We can continue to live in a world of denial and apathy, in which evil will continue to grow and spread its disease until it consumes us whole. Or we can be responsible and accept that our actions can and do make a difference. We can empower ourselves with knowledge and skills that allow us a fighting chance to save our own life or the lives of those who cannot fight for themselves. Instead of passively sitting by and letting others make decisions that benefit only a few, we can come together as a society and benefit as a whole.

Being responsible for one’s safety can be as simple as taking an awareness or basic self-defense class.

We as individuals can make a difference. If put into a situation where lives depend on taking action, are you going to sit there and allow your life or the lives of others to be taken? Or will you fight to your last breath in the hope of having a positive outcome to the situation? Maybe if more people thought like this, more lives would be saved instead of lost. Responsibility. Accountability. Those two actions can make a difference. Unfortunately, our society seems to be losing these two things.

But it’s not too late. All you need to ask yourself is, are you going to make the effort — yes, effort — to be prepared for evil when it lands unexpectedly in your world? Or are you going to live in denial and apathy, all the while depending on luck to save the day? In the end, you’re one of three things: the sheep, the sheepdog, or the wolf. If there were more sheepdogs in the world, maybe there wouldn’t be as many sheep for the wolf to slaughter.

One Response to “Evil Among Us: How Should We React?”