The Smith & Wesson M&P M2.0 is coming soon. What’s all the excitement about?

It seems that someone in the IT department at Academy Sports clicked publish instead of draft on the sales page of the yet to be released new handgun: The Smith & Wesson M&P M2.0. The very likely possibility that S&W has revamped their flagship automatic has the interwebs a buzz with anticipation. Of course, no one is really sure about anything as there has been no announcement from Smith & Wesson and the leaked information from Academy’s sales page was vague. But that won’t stop everyone from beaming with anticipation. 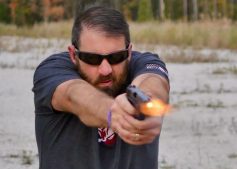 I like a new handgun just as much as the next gun enthusiast especially when the pistol touts improvements that will increase the performance of the gun. So a major revision is a good thing, right? As with most product introductions, there doesn’t seem to be much that is revolutionary with the new M&P. Instead the changes seem to be evolutionary.

So what’s the big deal?

When dealing with a spontaneous violent attack efficiency is important. We want to solve the problem of the attack with as little time, effort and energy as possible. The faster we end the attack, the less likely we are to experience the negative consequences of violence.

We would be silly to ignore the fact that the efficiency of our tools can help us to respond more efficiently. The M2.0 from S&W shares major characteristics with its predecessor the M&P 9. It’s a 17 round striker-fired gun and I’m guessing it will use the same reliable M&P magazines. According to the listing and congruent with the new S&W Shield in 45 ACP the grip has a new enhanced and more aggressive texturing. 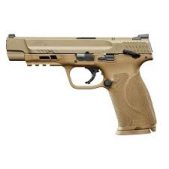 Improving the texturing on the grip of the M&P is a good thing. Humans have a natural tendency to grip our tools fiercely. It is how we have survived dangerous situations against foes for thousands of years, by holding on to our fighting tools. Improving the grip surface to make it easier to hold on to only makes sense and has the potential to be a solid improvement in efficiency in a violent encounter.

Another area that is potentially being improved is the trigger. A decent trigger is an important part of a defensive handgun. The trigger needs to be pressed straight to the rear without disturbing the gun. A good trigger can make that easier to accomplish especially since the trigger press is an unnatural part of using a gun for defense.

An improvement in the trigger press and in the texture of the grip have the potential to increase the efficiency of your handgun and that is a good thing.

You see, selecting the most efficient defensive handgun is a choice that you can make long before you are ever involved in a violent encounter that could have an impact on the outcome of the event.

The right defensive handgun can improve your chances long before the altercation.

There is no doubt that is the case. At the same time, you have to ask yourself, “Is the cost of investing in a new gun worth these incremental upgrades?”

For most folks I say that the answer is no. Assuming that a new M2.0 is going to cost you around $500, I think that money could better spent if your goal is improvement. For $300 you could find at least a day of quality defensive shooting instruction (maybe even 2) and the remaining cash could be spent on 1000 rounds of 9mm. Think about how much stronger your grip and how much smother your trigger press could be after the investment of some training and time on the range in serious practice.

I think that resources invested in ammunition and instruction can have a more significant impact on the outcome of a violent encounter than the incremental changes in the M&P series pistols.

Invest your resources on improving you, not your handgun.

Over the course of years the evolutionary changes that we see regularly in defensive handguns can really add up to revolution and that is a great thing. The difference between a semi-auto in 1975 and its current day descendants is great and can’t be ignored, but I will also argue that an individual that was dedicated to training with that 20th century blaster for 40 years would be a force to reckon with regardless of the gun in their hand. 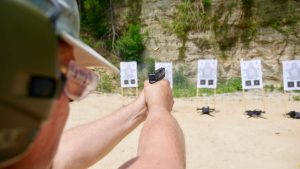 Sometimes there are revolutionary changes in the defensive gun world. Chasing incremental equipment improvements is fun because you get to hold something new in your hand, however, if you really want to own something new, invest in yourself. Instead of buying the newest whiz bang gun spend your money on training and practice. When you consistently invest in your abilities it will become incredibly clear how trivial short term evolutionary changes in handgun design are when it comes to defensive use.