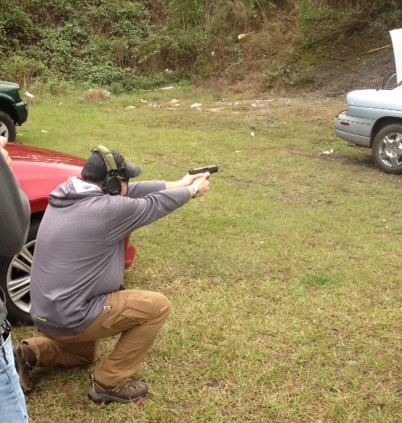 Use of cover is a straightforward individual skill that becomes more complicated in a crowded public space. Planning and training as a team are essential. Photo: author

We’ve all heard it said that some people see the world through “rose-colored glasses.” Although this usually describes someone who is overly optimistic or perhaps not aware of the unpleasantness around them, I think the larger suggestion is valid: none of us can see everything with perfect objectivity because we are looking through lenses that carry the tint of our individual attitudes and experiences.

In my case, those lenses are OD Green in color, causing me to first see everything around me as influenced by my military background. This is important, because as someone who has taught soldiers and now teaches armed private citizens, I have to be sharply aware of the vast difference between the two. Context is the key to how much value any training is going to have. Those who are never going to kick a door don’t benefit much from Doorkicker School. Conversely, those who work with carbines strapped across their armored chest rigs won’t find presentation from concealment on their Top Three skill-set list.

Because of this, it really stands out to me when I do run across an idea or concept that bridges this gap and is equally applicable to military combat operations and day-to-day self-defense for the average concealed-carry permit holder. I recently attended a training course that clearly demonstrated such a parallel. Afterward, I was inspired to dust off a couple of old Army manuals and see how their long-ago lessons are still useful to (retired old soldier guy) me today. 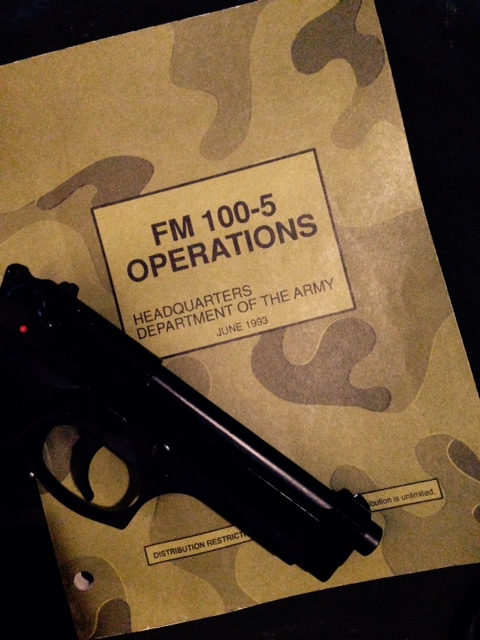 1993 copy of FM 100-5, “Operations”. Its most important lesson is about coordinating the actions of all available assets. This is an easily overlooked part of our personal defense training. Photo: author

The class was I.C.E. Training Company’s Two-Person Armed Defense course, and it brought vividly to mind concepts I had first encountered in FM 100-5 Operations, among other military publications.

First is the idea of Force Projection. This is what most people envision – and I would define for simplicity’s sake – as the “activity of war.” A tank maneuvering into position, an artillery piece firing, or the soldier aiming and shooting his rifle. The collective ability of the resources brought to bear in combat are part of Force Projection. In citizen self-defense, this is both how well I operate my pistol and how many others, such as my wife, will be operating pistols alongside me.

The more important concept – and the one that mirrors what was covered in the Two-Person Armed Defense course – is that of Force Protection. In short, this is Army-speak for the things that can be done to prepare for unknown threats or natural disasters on or off the battlefield. Sounds a lot like what you and I, as lawfully armed citizens, might consider prior to a trip to the mall, doesn’t it?

Force Protection recognizes that it is important to account for and manage known risks. Things such as weather and terrain need to be addressed, and they’re important no matter if you’re storming a beachhead or going Christmas shopping at the local mall. The weather influences how you dress, and terrain becomes where you’ll park your car. So the first lesson of Force Protection is to plan ahead. This is likely not news to you if you’re a regular here, but it may be interesting to note that what you do (or should be doing) in the name of personal security is identical in concept to what the Army does to arrive on the battlefield in one piece. In fact, if your planning skills are as disorganized as mine, you can even borrow the military method for not forgetting the important stuff: it’s called METT-T. It stands for Mission, Enemy, Troops, Terrain and Weather, and Time available. While an imperfect model for our purposes, it can serve if translated like this:

MISSION: Shopping trip to local mall.
ENEMY: Likely present, but strength and configuration unknown.
TROOPS: Myself, armed with a concealed handgun. My wife, also armed.
TERRAIN and WEATHER: Mid-December in Ohio, requires coat. Movement from remote, unsecured parking lot to large, crowded indoor space.
TIME AVAILABLE: Usually not a life-or-death consideration at the local mall, but what the heck. You could, for instance, plan to be done before sundown to avoid a dark parking lot. 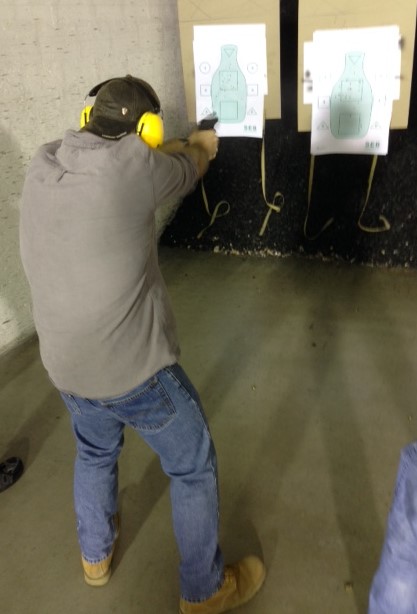 Again, not an ideal template, but it can help with some of the relevant considerations. In the above example, there won’t be any kids along for the ride. If there were, the roles of the adult defenders would have to account for them. METT-T is just the earliest stage of planning: establishing the circumstances.

The second phase of the plan is the actions taken in the event of an emergency. This is where the military model best fits into the context of private citizen self-defense. It is easy for most of us to focus solely on our individual skills – of course, I need to be able to do those basic “carry and shoot my gun” things. But now, we’re not talking about just me defending just myself. We’re looking at a situation where I am acting in concert with others, in support of a collective defense. The word we’re looking for here is teamwork – and successful teamwork is the result of planning and training.

Not surprisingly, the military excels at teamwork. No battle plan can ever rely on the performance of a lone soldier, and your plan for your family to survive a mass shooting event in the mall food court cannot be predicated on your gun skills alone. Participants need to know where they are in relation to both the threat and each other, what they are doing, and where they are going. This requires planning, training, and practice. 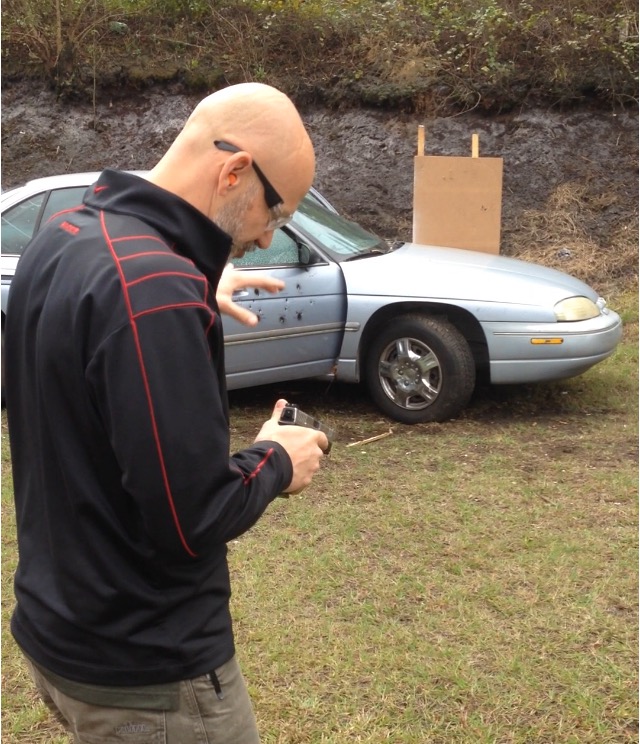 A good next step is to bring individual skills into more realistic complex environments, where good planning and teamwork are most needed. Photo: author

One of the huge lessons of the Two-Person Armed Defense course is that this kind of coordination is easier said than done. Among the most valuable experiences in the course are the live-fire range exercises. The whole idea that “I’ll cover the left and you cover the right” is not difficult to understand, but there are some surprises in store when you actually try it. First off, even though my role might be to “cover the left,” I might be able to see the area designated as the “right,” meaning that when a threat pops up there, my attention will still be drawn to it. It’s pretty unrealistic to assume I’ll ignore a threat just because I said I would. The goal has to be for me to minimize the amount of time I spend focused on that threat and instead return to my job of covering the left. Add in any number of exterior distractions and it’s not hard to see that execution of even the simplest plan requires coordination, training and practice. The opportunity to do this in real time, on the range, is invaluable.

Another key to success is communication. During an incident, we need to know what’s going on with the other members of our group and to let them know what’s going on with us. The chaotic, fluid nature of something like a spree shooting event makes that very difficult. But that difficulty can be eased by planning. For example, parents can use a known code word that tells their kids to “get behind me” if it looks like things might get ugly. The military swears by the use of such SOP (Standard Operating Procedure) roles, and they are of huge value for streamlining communications.

The military combat context and the citizen self-defense context usually don’t interchange much. After all, the soldier in a danger area has both a high expectation of violence and a coordinated, collective response to it. Military combat training also involves the nearly unlimited resources to work shoulder-to-shoulder as a team of several or a division of thousands. The citizen lacks both the foreknowledge of the fight and the resources to train for it in elaborate detail. But this doesn’t mean that we private citizens can’t absorb the lessons of training as a team for emergency response. We can take the concepts of that training – Force Protection is the conditions under which we plan, and Force Projection is the weapons, skills, and comrades we bring to the fight – and apply them to the everyday reality in which we live.

As a retired soldier, the ideas of METT-T, SOPs, and Force Protection/Force Projection work for me because they’re familiar constructs that I have already absorbed and employed. However, it took my attending the excellent I.C.E. Training Company’s Two-Person Armed Defense course for me to adapt them to my family defensive strategy. I strongly encourage anyone who is already training for emergency preparedness or self-defense to include this must-have course in their plans.