Adapting your training to account for what your opponent is likely to be wearing can open up new opportunities and counters.

In Part I of this series, we discussed some of the differences between training for sport MMA and training for real-world violence. Now that the differences, including some of the advantages and disadvantages of each, have been dealt with, let’s look at how to bridge the gap between the two sides. Here are some suggestions on how to make your MMA training more applicable to violence outside the ring, and how to bring the skill and intensity of MMA to your reality-based training.

For the MMA Fighter

If you get attacked at the beach, you’re set, but since the staggering majority of violent attackers are fully dressed, maybe you should see how you fight in your street clothes. The world is full of sleeves and collars; you can choke out a guy with his t-shirt and not even tear the fabric. This is worth knowing. If you want to translate your skills to outside the cage, you’ll be well served to learn the advantages and disadvantages of the gear you wear every day. This is especially true if you live in a temperate climate and find yourself swaddled in boots and heavy clothing a chunk of the year. Footwear in particular can be an issue.

Those of you who also carry concealed may change ammunition to account for the heavier winter clothing. Maybe your unarmed skills need the same attention to season.

Grappling 2-on-1 can provide a more realistic sense of urgency and often cures MMA fighters of the overconfidence they feel toward potential "street" conflicts.

Dealing with multiple attackers is a concern that reality-based training addresses and cage-fighters tend to ignore. After all, it’s not like the referee is suddenly going to decide to jump you while your back is turned. But if you want to get the most from your skills, you need to address this hole in your game. It’s not even that hard to set up: every MMA fighter reading this knows at least two other guys who would volunteer to gang up on you in the name of personal development. Most of us know several, because we’re charming like that. Grappling multiple opponents at once is also good for developing killer instinct. There’s a certain sense of urgency when you have moments to finish an opponent before his partner chokes you out.

Is there a particular setting in which you’re more likely to be attacked? Attacks in our own homes can and do occur, but places where we are exposed and distracted are more likely settings. Dark parking lots after MMA practice while we fumble for our keys, for example.

Taking some time to go over your techniques in a realistic setting such as a parking lot helps expose weaknesses in your game, and thus allows you to compensate for them. Working your wall escapes and counters off a parked car instead of a cage panel doesn’t take much time but can yield useful knowledge. You’ll become more confident of your personal defense skills by experimenting with what does and doesn’t work in a realistic setting.

Grappling and sparring with a dummy gun carried in the same fashion as you carry concealed can help you adapt existing MMA skills to allow yourself access to your firearm while denying it to your opponent. Remember: if you carry, any fight you get into will have at least one weapon involved.

This is a no-brainer for anyone training in MMA who also carries concealed. If you’re carrying any other tools for personal defense, be it knives, firearms or small impact weapons, you need to integrate them into your existing skill set. Fighters strive to be well-rounded inside the ring; you need to be well-rounded outside as well.

Dummy guns, rubber knives and other training weapons are readily available and easy to train with. If you carry concealed, put on a dummy gun in the same fashion you carry, and then spar and grapple with another fighter. You’ll be surprised which techniques turn out to be good or bad ideas, and you’ll gain valuable knowledge of how to best integrate your MMA skill set into concealed carry.

Currently, the common practice when sparring is to restart when your sparring partner “taps out.” You just won the bout, so why not start again? But in a real-world conflict, breaking a joint may have no immediate effect on your opponent. You can render a limb nonfunctional, but that might not make him quit. We know from numerous MMA bouts, most notably Tim Sylvia vs. Frank Mir, that an opponent may not even acknowledge a broken bone due to the effects of adrenaline.

Instead of resetting when your partner taps, just release the submission in question and immediately transition to a better position, an escape, or a different submission. This will not only make your skills better suited for the street, but for inside the cage as well.

Consider running, and I don’t mean the treadmill. The will — eagerness even — to engage an opponent is a highly desirable trait in a fighter. However, running from a bad situation is sometimes the best option. All the best fighters I’ve worked with avoid conflict outside the ring like the plague. They are not wusses, they are wise. If they fight in the street, even if victorious, they will likely be injured. An injured fighter misses his next fight, loses the money it would have brought in, and sees his opportunity go to another fighter. Running when you can isn’t just good tactics, it’s good business.

Get on the mat and spar. Better to find out what your body can – and can’t – do in this setting than in a parking lot at midnight.

For the Reality-Based Fighter

Glove up and play rough.

Nothing inoculates against violence like a nice controlled dose of the same. For the competition fighter, sparring at 60-80% strength and speed is a weekly, sometimes daily, activity. Sparring builds reflexes, precision and aggression. It also teaches how to manage emotional states and deal with adrenaline. It gives the participant a better understanding of their body and its reactions to stress. It even builds the valuable skill of flinch-reflex management. That flinch will never go away, but you will anticipate and manage the effects of it far better in your twentieth sparring session than in your first. Sparring isn’t true violence, just like the Vaccinia virus in the smallpox vaccine isn’t true smallpox, but it helps harden the fighter against the real thing and reduces the shock of actual combat.

One of the fundamental truths the reality-based fighter can take away from competition fighters is this: a fight is not a marathon, it is a sprint. That doesn’t mean that long-term endurance isn’t worth building, and MMA fighters certainly train to go all three to five rounds. But explosive power is what wins fights.

Since the dawn of competition, fighters have developed all manner of exercises and rituals to build explosive strength. Some, such as the box-jump and the kettlebell snatch, have stood the test of time. Others, like drinking cold beef blood or avoiding contact with the opposite sex … not so much. The best exercises for building explosive fitness are those that require large and multiple muscle groups to act in concert over an extremely short burst of time. The functional fitness workouts offered by CrossFit contain many of these exercises, as does the discipline of Powerlifting. A workout that combines these elements is a workout that builds your chances of surviving a fight with every sweat-inducing rep you put in. Sweat more now, bleed less later.

Repetition will destroy the competition.

When a competition fighter uses a technique full force in a match, he has practiced it hundreds of times beforehand. This is often not the case with fighters trained in reality-based systems. Since such training is usually offered in course or seminar format, it is the student’s responsibility to continue practicing after the instructor has moved on. Continual practice and repetition are what builds skill, so you must make them priorities.

The Blauer Suit allows students to train at full speed and force, a critical aspect to developing skills that will function under pressure. Photo: author

Sometimes you’ve got to swing for the fences. While a small percentage of reality-based techniques cannot be trained full force (and it’s a smaller percentage than you think), most can. If you’re not training a skill at full force or at least full speed a significant part of the time, you’re cheating yourself. Slow training is necessary at first, but it builds false confidence. You need to feel the adrenaline-inducing pucker factor of someone coming at you with bad intentions to really know how your body will react and what you need to do to make that technique work with your own physical tendencies.

Training full speed/full force in realistic settings is now easier than it’s ever been, thanks to the Blauer Suit (technically it’s the High Gear Impact Reduction Suit, but we’ll always know and love it by the name of its creator, Tony Blauer). This piece of gear allows you to use any technique an MMA fighter can, but with the addition of weapon strikes and “foul” strikes. The design of the headgear, whether intentional or not, also mimics the effects of tunnel vision and auditory exclusion. I’ve never met Tony Blauer, and I don’t work for him, but if I did, he could pay me in Blauer Suits. 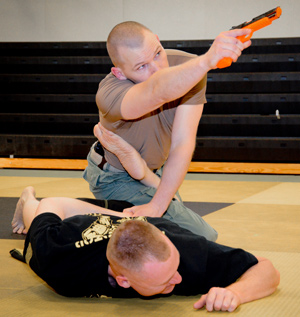 When you approach training for both competition and combat with an integrated skillset as your desired goal, you will reap benefits in both arenas.

Don’t fail to plan, but do plan for failure.

In MMA competition, we train every move until we know it works and then ask the question “What if it doesn’t?” We know our opponent is putting in as much time and effort as we are in preparation for the match, so we can assume that much of our arsenal won’t work on the first try. Assuming that even good techniques will fail forces us to have a plan for failure, and it prevents us from panicking when failure occurs.

In reality-based training, not only should you train in a way that forces you to adapt to failure, but you should often start from a position of disadvantage. The human being is primarily an ambush predator, so a reality-based fighter should spend a lot of training time on working their way out of a hole. Competition fighters train that way because ending up in the hole is possible, but for reality-based fighters it’s a near certainty.

By looking into the world of martial-arts competition, especially Mixed Martial Arts, the student of reality-based self-defense can learn many lessons about the physiological/emotional aspects of fighting and the development of functional strength. In return, the MMA fighter can glean a wealth of valuable information from the reality-based community on the likely settings, scenarios and disadvantages faced outside the ring, as well as better tactics for escape and avoidance. The goal of both camps is to develop a more complete warrior.

One Response to “Pride and Glory, Life and Limb, Part II: Bridging the Gap Between Competition and Combat”