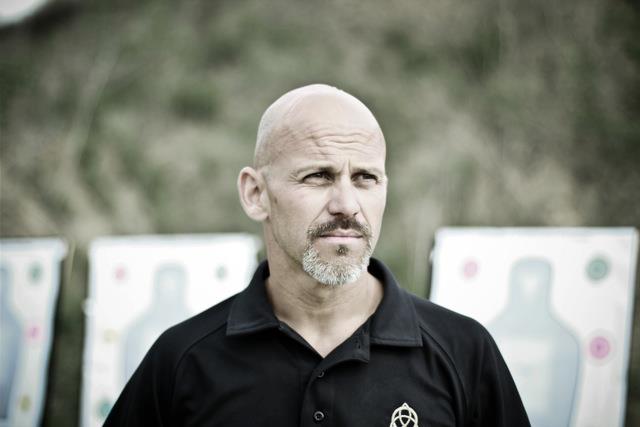 When talking to people who’ve worked with Rob Pincus, words like “unstoppable,” “consummate professional,” “expert,” “intense/inspiring/innovative/outstanding/amazing,” and “extraordinary” come up. A look at his age-to-accomplishments ratio gives a clue as to why he’s described in this manner.

Pincus built his foundation with years on the ground as a full-time law enforcement officer and executive protection agent. He was also commissioned as a U.S. Army Reserve officer after graduating from Norwich University, the oldest private military college in the country. Ten years ago, he moved into private training and consulting. His flagship program, Combat Focus™ Shooting (CFS), focuses on working with the human body’s natural reactions when under stress. CFS has been adopted or integrated by a variety of military units, law enforcement agencies and private instructors, and is well-known for having one of the toughest instructor certification programs in the industry.

This might be enough for many people, but Pincus was just getting started. Training consultant and staff writer for S.W.A.T. Magazine, host of three Outdoor Channel TV series – The Best Defense, The Best Defense: Survival and S.W.A.T. Magazine TV – team building and leadership development consultant for multi-national corporations, author and developer of the Personal Defense DVD Series and managing editor of this very website, the Personal Defense Network, are just some of the entries on his resume. Most recently, Pincus became a gym owner when he founded the CrossFit Sapere Aude gym due to his belief in the CrossFit system as a way to build and maintain the physical fitness that is vital for anyone committed to self-defense training.

In the midst of all this activity, Rob took time to discuss a variety of training topics with PDN.

Why did you decide to become a trainer?

I have always enjoyed the exchange of knowledge and discussion … that is, at its best, what the experience of being a trainer is. It wasn’t exactly easy to leave law enforcement work, which I did in 2001, but I knew it was the right thing to do. Very quickly, I realized that I was going to be happier and more productive in the private sector and, by 2003 when the bills were being paid entirely from my new profession, things were going really well.

I enjoy learning as much as I enjoy helping someone improve their skills and gain knowledge — I think that is a key factor in being a professional educator.

Lots of people teach shooting — in what ways do you teach it differently?

I think I do it with less up-front detail. Many shooting programs are overly mechanical. They set a new student up to potentially believe that if their foot isn’t in exactly the right place or they aren’t locked in on a hard sight picture, they may never be able to hit anything with a bullet. This sets them up for failure under pressure and has led to a lot of discrepancies between what we see on many training ranges and what we see in videos of actual defensive shootings.

While an instructor needs to have vast amounts of detail knowledge that can be shared as needed, people retain intuitive skills better if they figure out a lot more of the detail-level nuances. Our first real set of mechanical instructions to students is simply “Extend-touch-press.” Those are often enough … then, we expand detail as necessary, for example, “Extend the gun fully, in your line of sight.” And now, after several years’ and thousands of students’ worth of proof, we know it works more efficiently to build defensive shooting skills than the old mechanical approach.

How do you motivate students to learn while in a class? What type of person should your students expect to deal with when they train with you?

First, I am lucky that most of my students are motivated to begin with. Whether it is a private sector student paying a significant amount of money to be there, or military special operations personnel who have made it part of their profession to improve themselves at any opportunity, I don’t have to do much to get them interested in learning. That said, we push students to improve their skill in the middle of long, intense training days through their brain’s natural method of finding motivation: the reduction of the level of the neuro-transmitter dopamine.

The (very) simplified way to explain it is that if you EXPECT something good to happen (like hitting the target) and you don’t, then that can motivate a change in behavior. The options at that point become A) figure out what was wrong and correct it, or B) accept that you cannot perform at that level and don’t expect acceptable performance. Of course at some point, we must choose Option B … no one is going to be able to hit bottle caps at 100 yards in less than one second from the holster! But until we truly reach our limit, pushing ourselves to the point where we miss, figuring out why we miss and then fixing it are the ways to improve.

My students should expect a direct, passionate, assertive instructor. I won’t accept “effectiveness” in place of true efficiency, and I won’t sugarcoat simple facts. The most common moments of hurt feelings between my students and me are when I objectively point out the disadvantages of certain guns that some people are emotionally attached to.

Who are your inspirations?

In the training world, I really admire the way that Clint Smith and Louis Awerbuck have managed to have long careers, maintain their integrity and find (very different) business models that work well for them. Clint, especially, as he went through several phases that have spanned the length and list of options presented by the private-sector training industry. These guys have students who praise them incessantly, and they have outlasted most, if not all, of their detractors to the point where they are generally respected for their contributions and efforts, even by those who do not agree with everything that they teach on the range (including me!).

Hector Martinez, whom I used to train with in Tennessee in the mid ‘90s, inspired a lot of my range protocol and the way I always try to challenge students to train as realistically as possible even in a very basic training environment like a flat range with paper targets. His invention of the Figure 8 Drill, though not the same as we do it today, was revolutionary. Unfortunately, Marty passed away a few years ago, after a long career as an armed professional and teacher.

And who do you think are some of the best instructors teaching in your field today?

Putting this answer in a different context from the last question, I’ll list the instructors I have most often recommended to my students lately (in alphabetical order):

– Tony Blauer or his coaches for fundamental unarmed training

– Mike Seeklander for pistol or carbine

– James Yeager or his Tactical Response team for AK or pistol

What can students expect to take away from your courses?

An increased understanding of the physics, anatomy, physiology, neurology and empirical evidence from real defensive shootings, as well as increased skill with their defensive gun under realistic defensive shooting circumstances. I think the understanding of concepts and training methods is actually the more important take-away. Of course, shooting skill will increase, but the knowledge will be theirs forever. The skill will need to be practiced and developed over time or it can be very fleeting. My hope is that by understanding and learning the theories, concepts, techniques and drills at a high level, students will be motivated to practice realistically.

Do you have a “typical” student? What is s/he like?

Not really, because we teach such a wide range of students. We have worked with people who had literally never touched guns before, and we’ve worked with the highest level of military operator. The common denominators, of course, are their human features and choice of tool. Human hands are all about the same, human brains control human bodies in about the same way, the brain reacts to being startled in about the same way, the semi-automatic pistols all work with the same physics. So the typical student finds our approach to work really well for them, regardless of their background.

My personal philosophy is that everyone should Learn like they’ll live forever and live like they’ll die tomorrow. That is a paraphrase of a quote attributed to Ghandi, which I first heard years ago from Dr. Robert Smith. I think it identifies the way I try to exist. The first part sums up my training philosophy: Get as much knowledge as you can. Don’t stop learning, thinking, questioning, discussing, experimenting. I also like what Craig Douglas says: “Identify the problem and do the work.”

I think lots of people do the second half of that, but not everyone asks the right questions or identifies the problems that we need to solve very well. They end up seeking defensive answers but trying to solve competition or target-shooting problems. Craig’s advice is basically the Scientific Method, a proven way to do proper research and come to meaningful conclusions.

Looking ahead, what do you see in the future for yourself as a trainer? How about for your particular training industry?

I see myself continuing to do more and more work on program development and large-reach media projects. These are the areas that allow me to interact with the largest numbers of people. We have dozens of certified instructors teaching the Combat Focus™ Shooting program and scores more integrating its principles into training for defensive shooting in the private sector, military and law enforcement. Of course, I will continue to travel and teach courses, but more and more often, they will be at training seminars with large numbers of people and instructor development or advanced courses.

There is a long list of things that I used to teach that I no longer address in fundamental defensive shooting courses. One that I’ve really been pressing lately is the strength of the 9mm as a personal protection round. In the past, I recommended that people make their own choice about the balance of capacity, power and recoil.

But after all my observations of shooters on the range dealing with recoil issues, the logic of the benefits of higher capacity, and the empirical evidence that suggests most violent encounters involve multiple strings of fire, I’ve come to the conclusion that 9mm is a strongly preferred self-defense caliber. I invested heavily in .40 S&W during the explosion of popularity of that round in the ‘90s, but if I started all over again today, I would probably never buy a gun in that caliber.

Personal Defense Network and its goals of bringing high-quality self-defense information to a wide audience remain one of Rob Pincus’ top priorities, so stay tuned to PDN’s video, article and forum channels for much more from him.