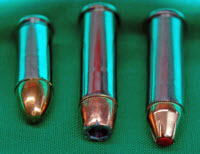 Each piece of equipment we use for personal defense is a tool. And as with all tools, we have to consider the design and purpose of the tool and ensure we are putting it to the proper use to be effective. It’s possible to dig a hole with a claw hammer, but it’s not the most effective or efficient method. A shovel can put a nail in a board, but it’s not the best way to do it.

Throughout history, there have been two primary types of weapons: Impact weapons and cutting weapons.

Impact weapons are designed to hit the target with sufficient focused energy to destroy the target or stop the target from moving. A large-scale example is the MOAB, or Mother Of All Bombs. The MOAB uses explosive energy alone, with no shrapnel, to destroy targets.

Wadcutter round used to cut smooth round holes in paper targets during competition shooting.

Cutting weapons are designed to do just that, cut. Pointed sticks, spears and swords evolved into firearms. Bullets are designed to cut the opponent, pierce organs and disrupt the central nervous system. The invention of gunpowder gave distance and range to the spear in the form of the bullet. While the technology of the delivery system changed, the target (the human body) remained the same.

There are two primary methods to stop or kill a mammal, and men are mammals: Disrupt the central nervous system and cause massive blood loss.

The first is the most difficult. The total disruption of the central nervous system by destroying the medulla oblongata will cause complete shutdown of the target. This requires placing a shot at the base of the brain that penetrates the skull and destroys the “apricot.” This is extremely difficult to do with a handgun cartridge. The brain bucket has been designed to protect that most important organ and it does a pretty good job. 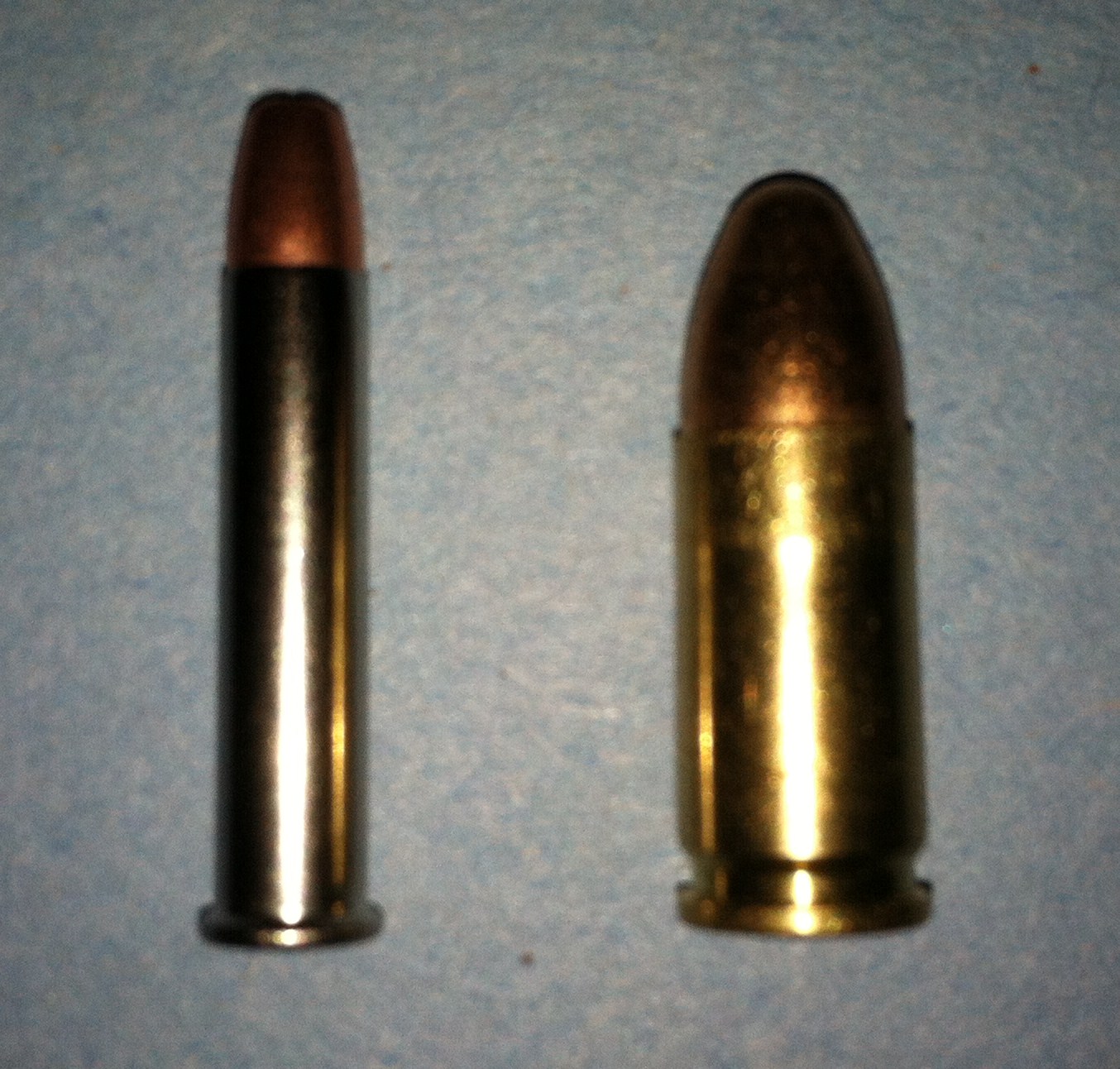 This cartridge is specifically designed for short-barreled revolvers like my Smith & Wesson 340 PD.

The second and most common way to kill a mammal is to cause massive blood loss. This is a slow process and the animal can still be active during it. Every deer hunter has seen or heard of a perfect shot on a deer that took out the heart and lungs, and yet the deer still ran for many yards before it collapsed. Deer are similar to men in size and organ placement.

A man who is not quickly stopped is still a danger. Many men, “good guys” and “bad guys,” have been shot but continued returning fire and attacking. The FBI Miami Shootout is an example of men, good and bad, who were shot but continued to fight.

Ultimately the bullet has to penetrate and cut the target to cause central nervous system disruption or blood loss. Penetration is something that is rarely discussed in self-defense circles, but I believe it is a key element for proper cartridge design.

Basic components of a pistol cartridge are the bullet, case, powder, and primer.

A firearms cartridge consists of the bullet (projectile), case, powder, and primer. A good personal-defense cartridge must optimize all of these elements. Penetration is a crucial element in the cutting power of any handgun cartridge.

Many discussions have been had about the best caliber for self-defense handguns. I will summarize them by saying it is a personal decision based on your needs and abilities.

.25 auto round only has a 35-grain bullet and minimal velocity. I do not recommend this cartridge for personal defense.

Tom Givens, owner of RangeMaster Training, sums up the need for accuracy first. He says, “A good hit with a marginal bullet is better than a marginal hit with a good bullet.”

Tom also touches on the fact that a bullet is a cutting weapon: “Calibers smaller than .38 Special/9mm do not penetrate enough to reach truly vital structures deep within the body. Once the threshold of adequate penetration is reached, bigger caliber bullets seem to offer two advantages:

More likely to break a bone than to glance off it; 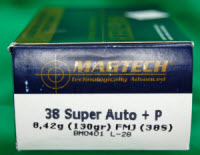 Be sure what you are buying. The .38 Super cartridge is for a semi-auto handgun, not the .38 revolver many people think of when they hear “.38.”

Bullet weight is another issue. Many calibers have several bullet weights to choose from in standard loads. The type of weapon you carry and the cartridge load itself all affect the success of the cartridge.

Bullet design is a key element. There are many choices for modern hollow-point self-defense ammunition. Some ammunition companies are very effective at advertising. I strongly suggest investigating the manufacturer and type of ammunition carried by law enforcement. LE agencies spend a great amount of time, effort and money to determine the best carry cartridge. The work they have done may be beneficial to you and save you time and money as well.

Having said that, how do you find out what ammunition law enforcement agencies are carrying? There is no central collection point of information. The easiest way is to ask your friendly neighborhood cop. Preface the conversation by letting the officer know you are a legally armed citizen or CCW permit holder. Tell him you are looking for a good personal defense round and ask if he has any suggestions. He may suggest what the PD carries or he may have other suggestions that might be better for you. Remember what I said about some ammunition manufacturers being very good at advertising.

Calling local training academies could get you some useful information as well. Just be sure to tell them why you’re asking. LEOs face many dangers and are always on guard for bad guys trying to collect intelligence information on equipment and tactics.

Search the Internet. Unfortunately, there are many unsecured law enforcement forums. A simple Google search of “law enforcement duty ammunition” can show discussions about this topic. Just be aware that the information on these forums may not be real or accurate, just like anything else in the cyber world. I don’t mind giving that suggestion because the bad guys already know it.

As with any product you buy, perform due diligence. Is the company a reputable manufacturer that has been in business for a long time? Check online for information about the product. Is this a solid and proven design or is it a new “miracle” ammunition?

Whatever you carry, choose a proven design of hollow-point bullet. The hollow-point design expands and makes a larger wound channel, increasing the cutting power of the bullet. The full metal jacket (FMJ) bullet is great for practice but not appropriate for personal defense. I am also not impressed with multiple-projectile or shot-shell cartridges. I have tested them extensively and find they do not have sufficient velocity for penetration.

As shooters, we are responsible for all rounds we send downrange, and many of these multiple-projectile and shot-shell cartridges cause an unacceptable spread in the pattern. I love shotguns for personal defense, but they were not designed to be used out of pistols with rifled barrels. 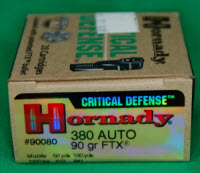 This 90-grain bullet in a .380 personal defense round leaves the muzzle at 1000 feet per second. Compare that to a 9mm or other calibers.

I strongly urge shooters to carry +P loads for any firearms that are rated for that cartridge. The +P is a cross between a standard cartridge load and a magnum load. It gives increased projectile velocity and better cutting power and penetration. Be sure to check that your firearm is rated for a +P load before you use it in that firearm.

Another manufacturer makes a .380 with a slightly lighter bullet with increased velocity.

Check the firearm itself, especially revolvers, and look for the cartridge rating. Check your owner’s manual for +P rating for other firearms. Generally speaking, older firearms are not rated for +P ammunition. 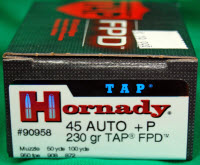 Here’s the big-daddy, the flying ashtray. This .45 leaves the barrel slowly but has a big 230-grain bullet. And this is a +P!

I do not recommend hand loading self-defense ammunition. There are many liability concerns should you have to use the ammunition in self-defense. Modern manufacturing techniques are so good that buying ammunition from a manufacturer is a much better choice.

The case and primer need to be good quality and properly sealed. Ammunition for self-defense is carried in all sorts of weather and conditions. The modern commercial techniques are proven. 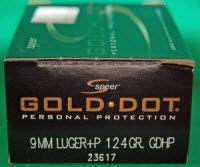 This 9mm round leaves the muzzle at 1220 feet per second and has a 124-grain bullet. The increased bullet weight and muzzle velocity make the 9mm more effective in personal defense than a .380 handgun.

Hopefully you are going to the range on a regular basis. Check your expensive carry ammunition as you load and unload at the range. The oils in your skin can cause corrosion over time. Look for damage to the cartridges. Check the bullet and ensure it is properly seated to the case. Watch for anything out of the ordinary and replace any damaged ammunition.

Ammunition is a perishable commodity. It will lose effectiveness over time with exposure to heat and cold, snow and rain, and human hands. Consider rotating your carry ammunition. I trade out my carry ammunition every year at my birthday. It’s an easy date to remember, and I shoot it to give myself exposure to the carry load and a little birthday present.

The firearm you spend so much money on to buy and train with is absolutely useless without effective ammunition. Spend a few dollars more and get the best ammunition to keep yourself and the people you love safe.

64 Responses to “Secrets for the Best Personal Defense Cartridge”