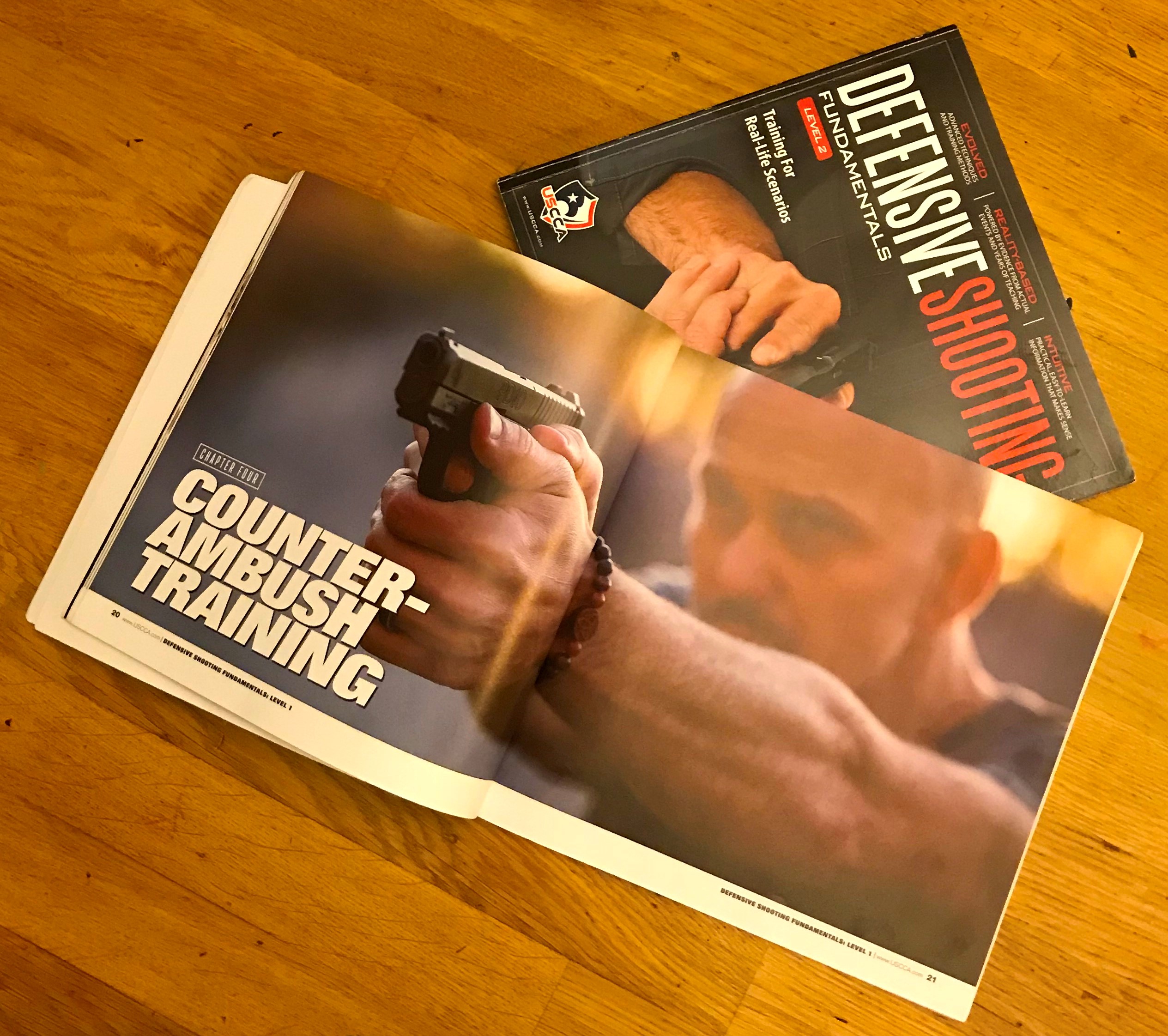 Counter Ambush Methodology requires us to learn to be able to process information while performing a complex task. Responding appropriately during a Dynamic Critical Incident (DCI) is most certainly a “complex task.” Stopping an attacker from hurting or killing you or someone you love will most likely require multiple necessary steps.

Science and reports from individuals who have been in DCIs tell us that our brain’s “processing” power during a DCI may very well be perceived as diminished, distracted, or non-existent. Many folks may have already experienced this to a degree, during a car crash or heated argument with a fellow human being. The less thinking we can do to physically respond to an attacker, the more we can prioritize that processing power to our cognitive response to the attacker. 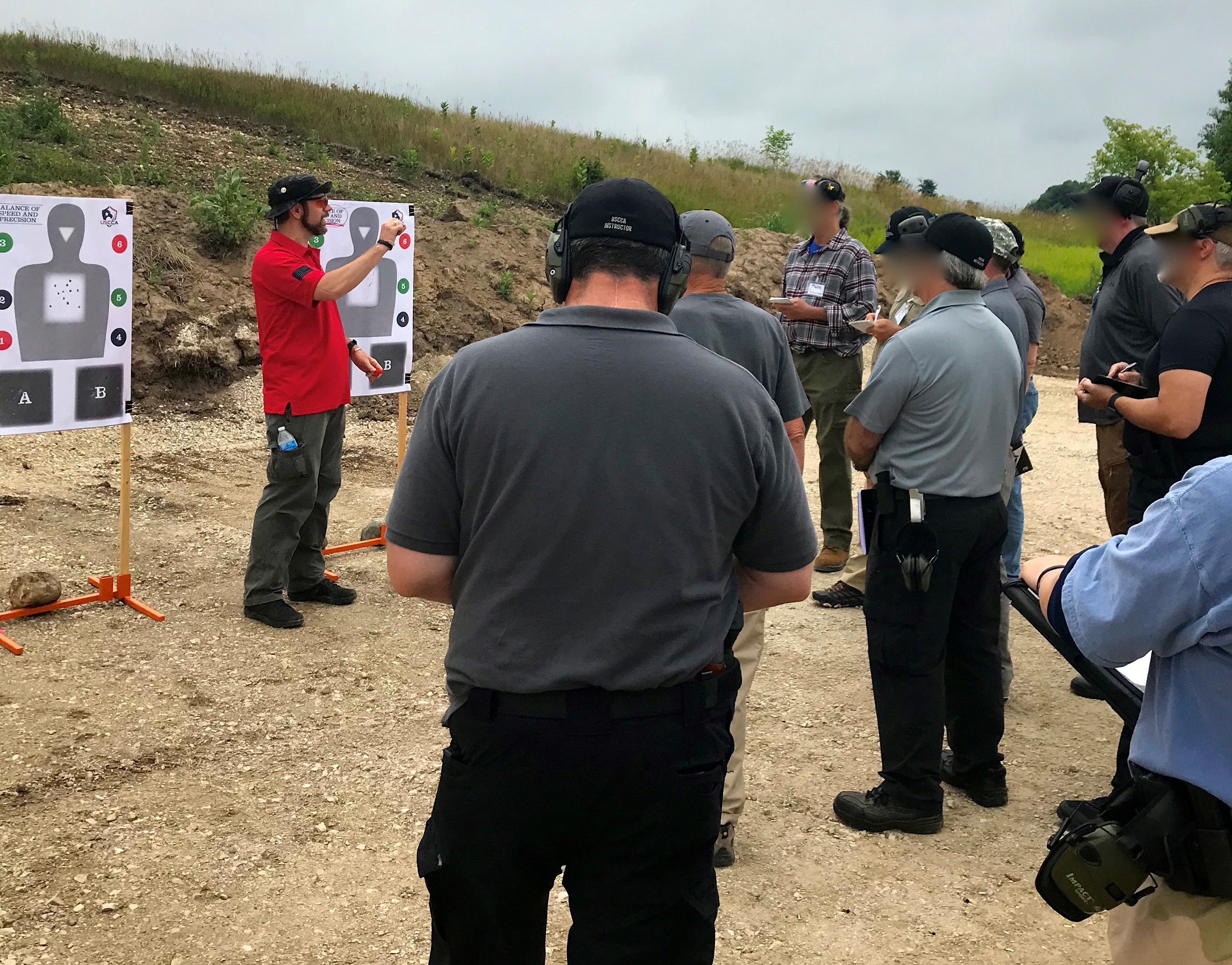 If you have ever spent time with children, you can recognize many examples of learned intuitive responses to learned stimuli. An example I often use in my classes is, when my son was a baby, he touched everything he saw. If he saw something, he reached out his hand parallel to and then into his line of sight and grabbed whatever he’d seen. One day he reached out to the red glow of a heater. He quickly learned that heat and red glow probably mean pain and burn. Now when he recognizes heat or a red glow, he quickly recoils from it or proceeds very cautiously. The heat stimulus needed to be learned. It was not “automatic.” Generally and thankfully, it only needed to be learned once. This is a great real-world example of a learned intuitive response to a learned stimuli:

Response: Stay away, don’t get burned.

It doesn’t take us long to learn the hot stove stimulus. Photo: author

Through frequent and realistic training, we can develop skills so we can apply them intuitively in context. Ok, that’s a bunch of big words … what do they mean to a regular human being? If our responses to learned stimuli are practiced consistently many times, they can become “intuitive.” We can recognize this when we don’t need to consciously think them through in order to apply them. It just happens, which allows us to dedicate what thinking power we have to other things. This is often referred to as “muscle memory,” but is actually called myelinization within the brain. When skills are learned, the brain basically builds a route or pathway in the brain where neurons travel while performing said task. The more correct reps we get, the deeper that pathway becomes and the more intuitively we can apply that skill.

Many classes and curricula spend a lot of time administering regimented, highly choreographed drills that essentially disregard the processing of information. They may get you good trigger reps, but how good are they if they are not in context? Here are some physical actions that may need to occur in order to appropriately respond to a DCI.

Avoid choreographing the number of shots fired on the range. We don’t want to build a neural pathway of shooting a prescribed number of times. During practice, allow yourself to go to slide lock so you can really learn that stimulus. Photo: Rob Pincus

Let’s look at that list in context, along with the cognitive steps that must be taken if we are to respond appropriately during a DCI.

Physical and Cognitive Actions: reacting to a stimulus, recognizing and positively identifying the attacker, appropriately responding by identifying and potentially evading to an escape route or position of advantage, possibly gripping our firearm, moving laterally to the attacker, presenting from the holster, recognizing who is in front of, beside of and behind the attacker, potentially manipulating a thumb safety and achieving a two-handed grip as we present the gun to full extension, knowing our own competency to determine whether or not to take the shot, balancing speed and precision so we get the “defensively accurate hit,” recognizing if we need to use our sights or not, pressing the trigger, controlling recoil, pressing the trigger multiple times as necessary until the attacker stops attacking, recognizing that the attacker has stopped so our defense stops as well, breaking focus on the attacker, assessing our surroundings, identifying other human beings, deciding how to respond appropriately to them…

There is a lot of thinking going on! Hence, the Counter Ambush Methodology and the focus on our being able to process information while performing complex tasks. Training to be the best “Family First Responder” you can be requires much more than shooting.

What about the shot timer reference? Imposing objective “time” standards removes what Captain Chesley “Sully” Sullenberger referred to as the “human factor.” (Google it or watch the movie Sully directed by Clint Eastwood.) The human factor is subjective and situationally dependent. It takes time for humans to process information. Holding to an objective time standard can give many students a false sense of competency or discourage them from becoming their own first responder. As an educator, I don’t ever want one of my students to walk away defeated and saying, “I can’t do this, I’ll never be that fast.” Indeed fast is good! Be as fast as you can possibly be while getting good defensively accurate hits, but do not discount the time it takes to process information. 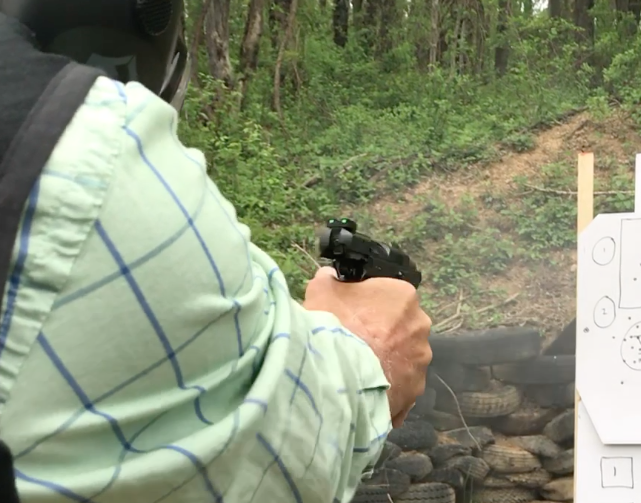 Many malfunctions feel like slide lock. Performing a reload upon recognition of slide lock will probably fix the vast majority of feed malfunctions. Learning what slide lock feels like will help you be more efficient during a Dynamic Critical Incident. Photo: author

By now you might be asking, “What are the patterns I should be focusing on?” There are many that come up in my classes. Remember if your responses are learned and intuitive, you won’t have to dedicate as much thought to perform them. Here are some examples to work on and learn while you train: 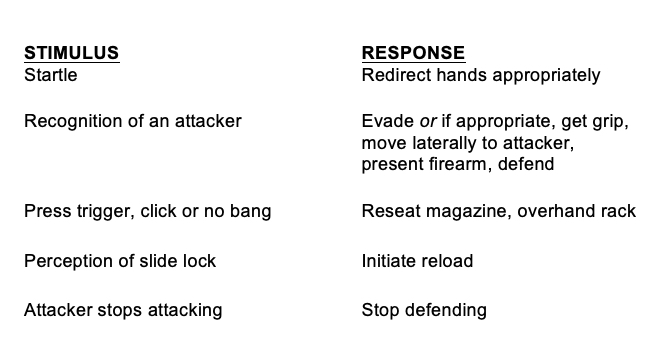 These are a few examples of stimulus-response patterns that we focus on in classes that are based in the Counter Ambush Methodology. These responses or skills should be efficient. Skills should be applied using the least amount of resources (time, effort, energy), and we should be able to apply these skills while processing information about our environment, the attacker, and other people in the environment. That is training in context. 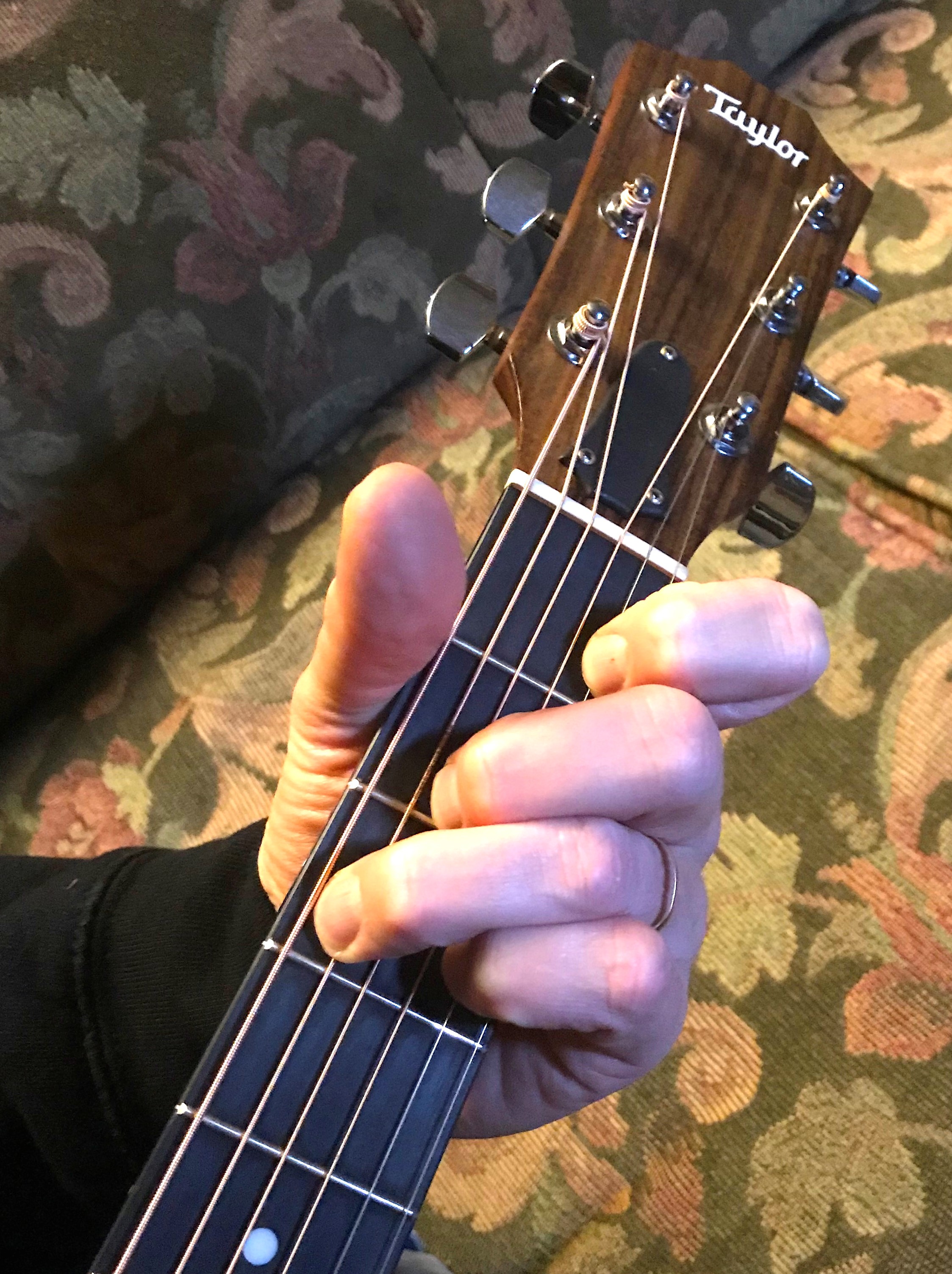 Consistency is doing the same thing the same way as often as possible. Consistency helps you build neural pathways as well. Why learn three different ways to do three different things when you can do three different things one way? A great example of this is when you load a pistol: Do the same motion that you would to clear a malfunction or reload. At the high compressed ready position, seat the magazine, keep contact with the grip as you rotate the support hand, grasp the slide behind the ejection port (keep your pinky clear of the ejection port), and overhand rack.

Visualization is a major component of many types of training and is very important for contextualizing defensive training. The stimulus of “the attacker has stopped attacking” must be visualized on the range. Even if you have falling steel or reactive targets, don’t get used to punching holes in paper or pinging metal. Visualize the attacker giving up, falling down, dropping their weapon, or expiring, and let that be your stimulus to ceasing your defense. Visualize something different each rep. Use that visualization to also plan what you might do if the attacker runs away, or falls, or complies, or expires. Why waste a good opportunity for a good rep? 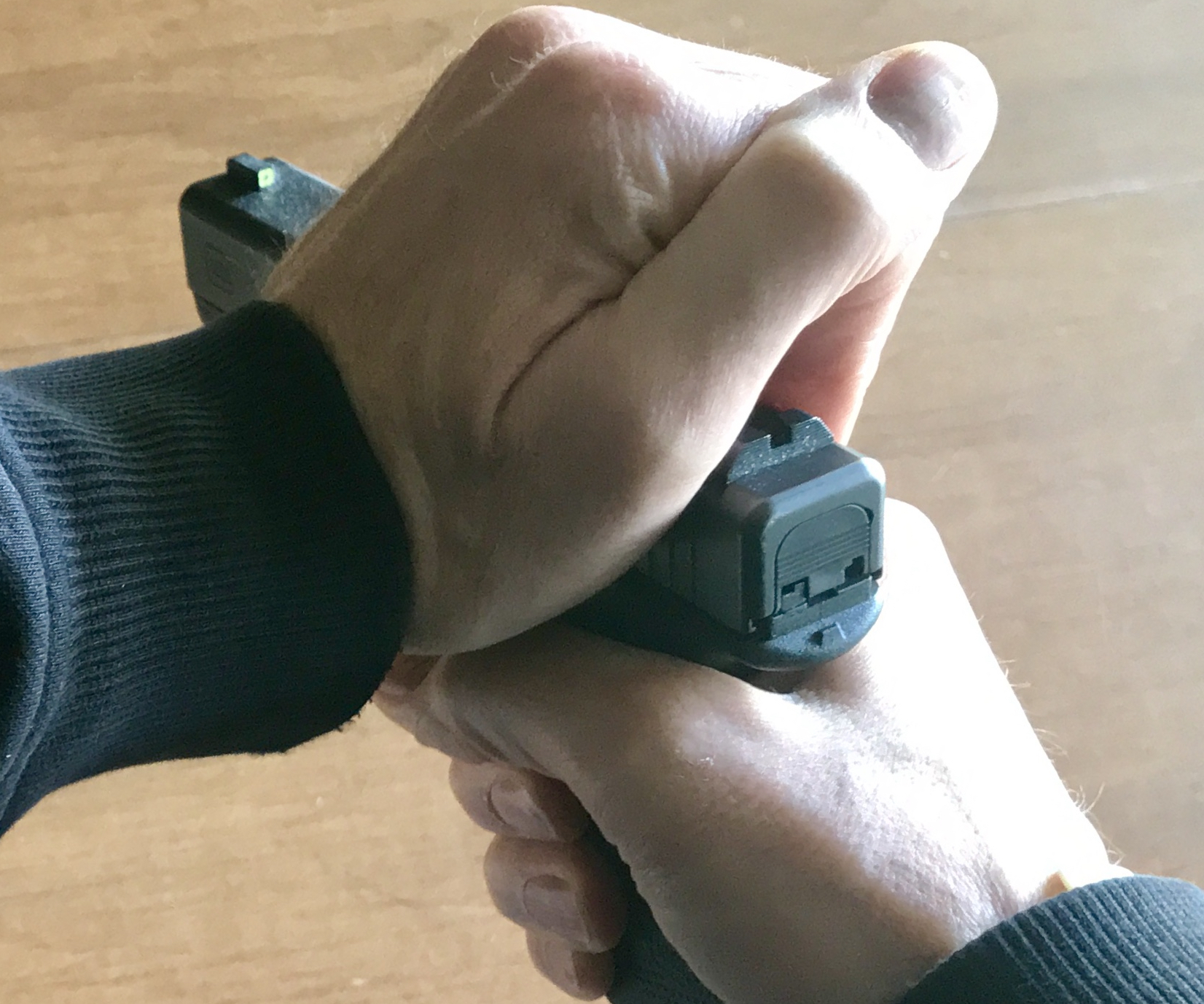 Seat the magazine and overhand rack is one skill that can be used to solve multiple problems. Photo: author

16 Responses to “The Secret Kung Fu of Stimulus-Response Patterns”