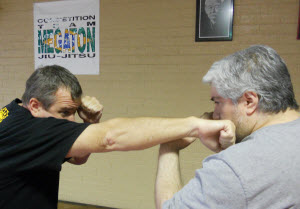 There are as many theories on what is the best “technique” in the world of self-defense as there are experts. Unfortunately, personal agendas and bias all too often get in the way. One area that is particularly susceptible to this is the issue of using closed fists in a self-defense/combat situation. There are a lot of standard catchphrases that get pulled out of the hat whenever this topic comes up. Let’s look at them and apply some logic without the emotion.

Generally, the negatives that are brought up are: you will hurt your hand, and it takes a long time to master how to use a closed fist. Let’s examine both of them in detail.

Injury to the Hand

Having been involved in this area as a student and instructor for over 30 years, it is my experience that most injuries to the fist arise from a failure in one of two areas: fist formation or precision of the strike.

Unfortunately, the actual matters of forming the fist and hitting with it too often get short shrift, even in a boxing gym. Everyone is in a hurry to actually hit something, and details occasionally get lost. 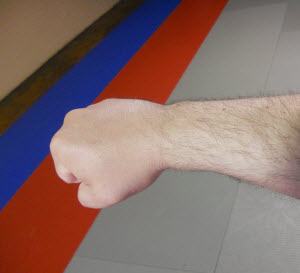 The correct way to make a fist is shown in this photo. The important points to note are that the back of the palm is level with the forearm, and the first two knuckles are lined up so the entire forearm is behind them. These two positions essentially turn the hand and lower arm into one unit, with the large bones of the latter supporting the smaller bones of the former. Consistently doing this will go a long way to minimizing any potential for injury.

The other things that help prevent injury are to make sure you have a clear focus on your target with the strike and a clear focus on what you are striking with. Most people settle for throwing the whole fist in the general direction of the total object. If you don’t try to be precise, is it any wonder that you might hit the top of the head? When I coach, I use the phrase “aim small, miss small.” It is as appropriate for punching as it is for shooting.

One of the concerns the pro-open-hand people often cite about striking with a closed fist is the chance of damage to the small bones of the hand. I believe this is a legitimate concern and something that should be taken into account. However, the open-hand people never seem to follow through on their logic by taking it a step further: they fail to address the fact that while you have a chance of doing damage to knuckles and the other (relatively) weak bones of the hand, I think the chance is even greater of causing serious harm to the extremely vulnerable fingers or wrist during an open-handed strike.

Open-hand proponents seem to imply that you have nothing to worry about by leaving all those weak digits dangling out there while you ram your palm with full force into the skull of another person. But it has been my experience that not only is it easy and very common to jam or torque fingers past the point of injury, it is also extremely debilitating.

As I write this, I am nursing a jammed thumb that is VERY painful. How did I injure it? During clinch work with an OPEN HAND! Let me tell you, with the pain I was feeling, it was not easy to get through the rest of the training session although going fairly light. And I didn’t even do it on that hard a surface (the floating ribs and waist rammed my thumb). I shudder to think what would have happened if I had been driving it at full speed at solid bone.

Much of the training that open-hand proponents do is striking focus mitts, heavy bags, Thai pads, etc. The problem with spending all your time on those objects is that they have a smooth and consistent surface. Unfortunately, the human head does not. It is uneven with lots of weird ridges. It also has a tendency not to move in a smooth or consistent manner. It’s easy for the head to suddenly tilt forward, completely changing the type of surface that the open hand makes contact with. This alters the ease of use as well as its effects. Deriving all your ideas of how useful the chin jab/tiger claw/slap/etc are based only on hitting nice, smooth targets can lead to big surprises should you actually have to make impact on another person’s skull. 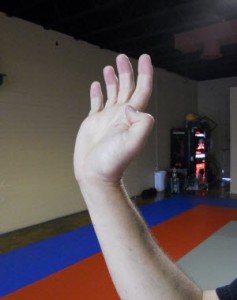 Many advocate this type of hand formation: bent wrist, splayed out and unsupported fingers.

This is an exact copy of a photo of a well regarded and internationally famous proponent of open-hand strikes. Look at the formation of the hand that he advocates as superior to a fist. The hand is bent back, weakening the already weak wrist, and the fingers are splayed out without any structural support. Furthermore, this strike is targeted at the bony jaw – the same target the open-hand proponent says will destroy the hand! How is this stronger than a fist tightened together with all the bones locking together to form mutual support hitting to the same spot? It makes no logical sense.

This illogic is just as pronounced with the other open-hand blows – slaps, tiger claw, and edge of hand strikes – especially since they are all aimed at the head. I don’t understand the magic alchemy that says you can be incredibly accurate when the hand is open, and flail blindly the second you make a fist. Again, this is a major failure of logic.

The fact is that the hand is somewhat fragile regardless of what you are doing. There are a lot of little bones that are susceptible to breaking. However, it does seem to me, and is backed up by talking to any orthopedic surgeon, that when I make a fist, all the parts of the hand lock together into a tightly packed formation that feels much stronger than the looseness in any open-handed strike. 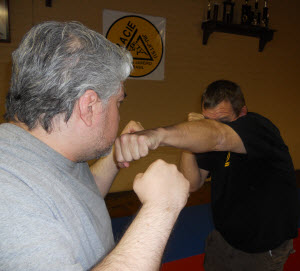 Critics often state that closed-fist striking takes a long time to learn and is tough to do with non-professionals. As an instructor who has taught in many formats (private, weekly group, and seminars), I can safely say that this is patently false. I generally have people capable of hitting hard objects with force within two to eight hours of training, and many times this is accomplished with people who previously have never had real training.

Taught properly and with the right methods, almost anyone can easily become proficient and functional in the use of a closed-fist strike in a short amount of time, and with no more risk of injury than using any open-handed blow. And this isn’t just one person’s anecdotal evidence. The group of trainers I am associated with in the Crazy Monkey Defense (CMD) system all have had the same results. In addition, the popularity of Mixed Martial Arts (MMA) gyms has led to more people training with closed fists, and there has not been some meteoric rise in hand injuries. In short, the closed fist is not just for professionals.

Adding to the ease of learning how to punch is the fact that making a fist is instinctual. Just look at when a baby is hurt or angry. What does s/he do? Makes very tight fists. The human body will instinctively go to the best physical positions in order to protect itself as much as possible. That would be a fist, not a chin-jab formation.

Other Possible Negatives with the Open Hand

There’s a really important aspect that not one pro-open-hand person has ever successfully addressed (at least in my experience). For all their pushing of the virtues of the open-hand strike, they have yet to overcome the single most outstanding virtue of the closed fist. No matter how you throw it, no matter how fast and non-telegraphic, every single viable open-hand strike will be circular. Some might be less circular than others, but they are all circular to some extent. In stark contrast, a closed fist allows you to throw it in a tight, straight line that closes all the gaps where an opponent can hit you back. Circular open-hand strikes leave a large window of vulnerability. 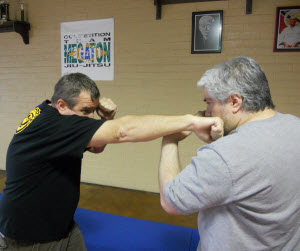 A solid, powerful, protected strike that is easily duplicated by almost anyone in a high-stress situation.

Because I have used them time after time, and have seen and felt the results. There is no guessing. Nor do I have to rely on stories my teacher told me about how a particular move was used by commandos/samurai/monks in the past and how effective it was for them. At any time, I can grab training partners, get on the mat, and attempt to apply the jab and cross on an active and resisting opponent who is trying to do damage to me at the same time. I would rather have two techniques I can count on instead of 50 that I only have theoretical proof of. It’s fine to think the chin jab is devastating, but if you haven’t actually used it in a live environment, how can you count on it? Can you land it consistently on a moving, resisting opponent? Does it always affect people the way you want it to? If any of the answers is no, I would suggest there’s a weakness in your plans.

I have no real issue with anyone who chooses to use open-handed blows to defend themselves. We all have to use what we personally trust. However, if you make the choice not to employ closed-fist strikes, please do so with real and valid reasons and not the false, worn-out clichés discussed here.