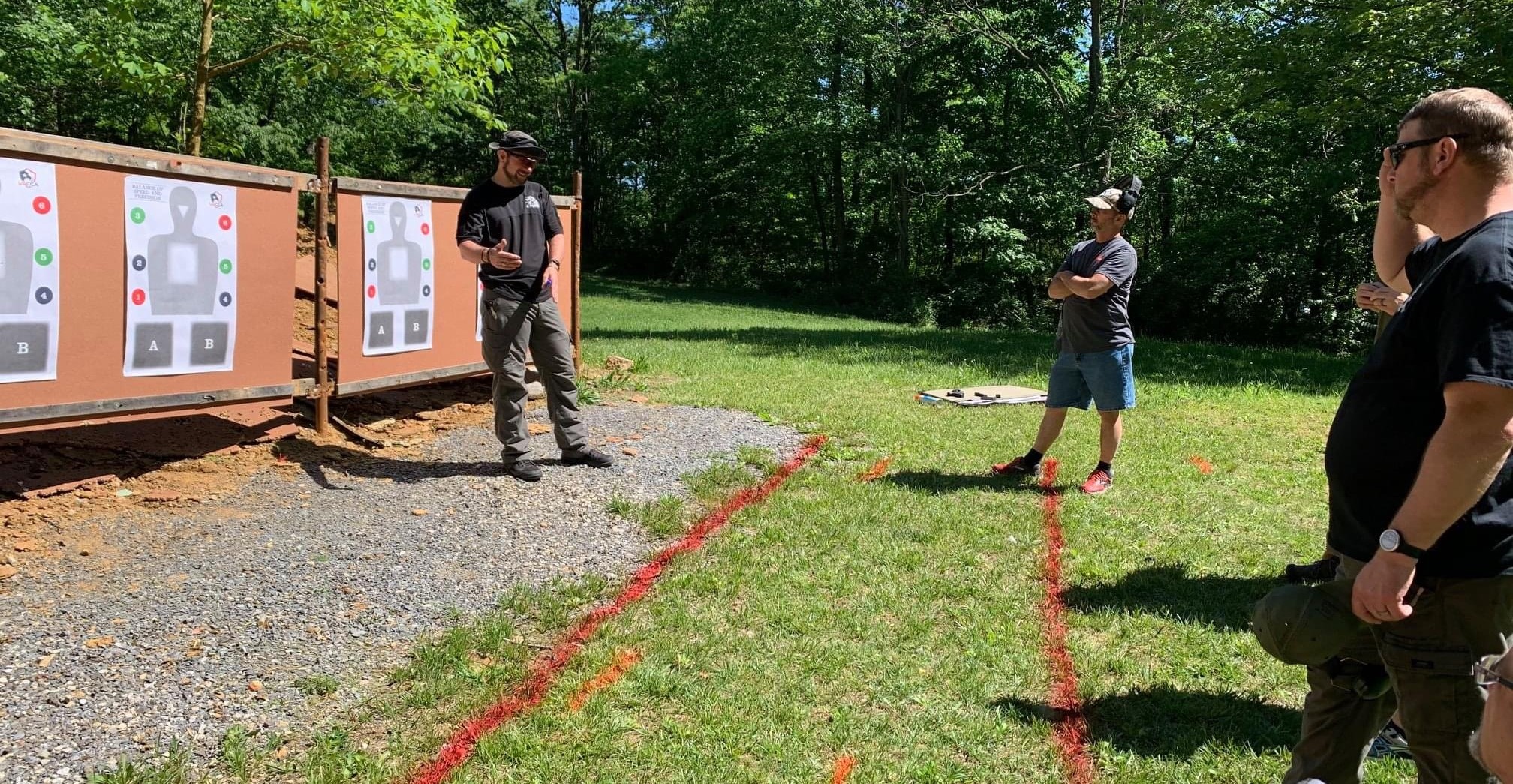 Deviation is the difference between where we want the bullet to go and where it can go. Photo: Ken Hoffman

A miss on the range is frustrating but of zero consequence. A miss in a dynamic critical incident may mean one less round in your gun, one more stab wound from the attacker, or an errant round skipping down the road and potentially hitting a little kid on a bicycle. We must allocate the resources necessary to get our hits. 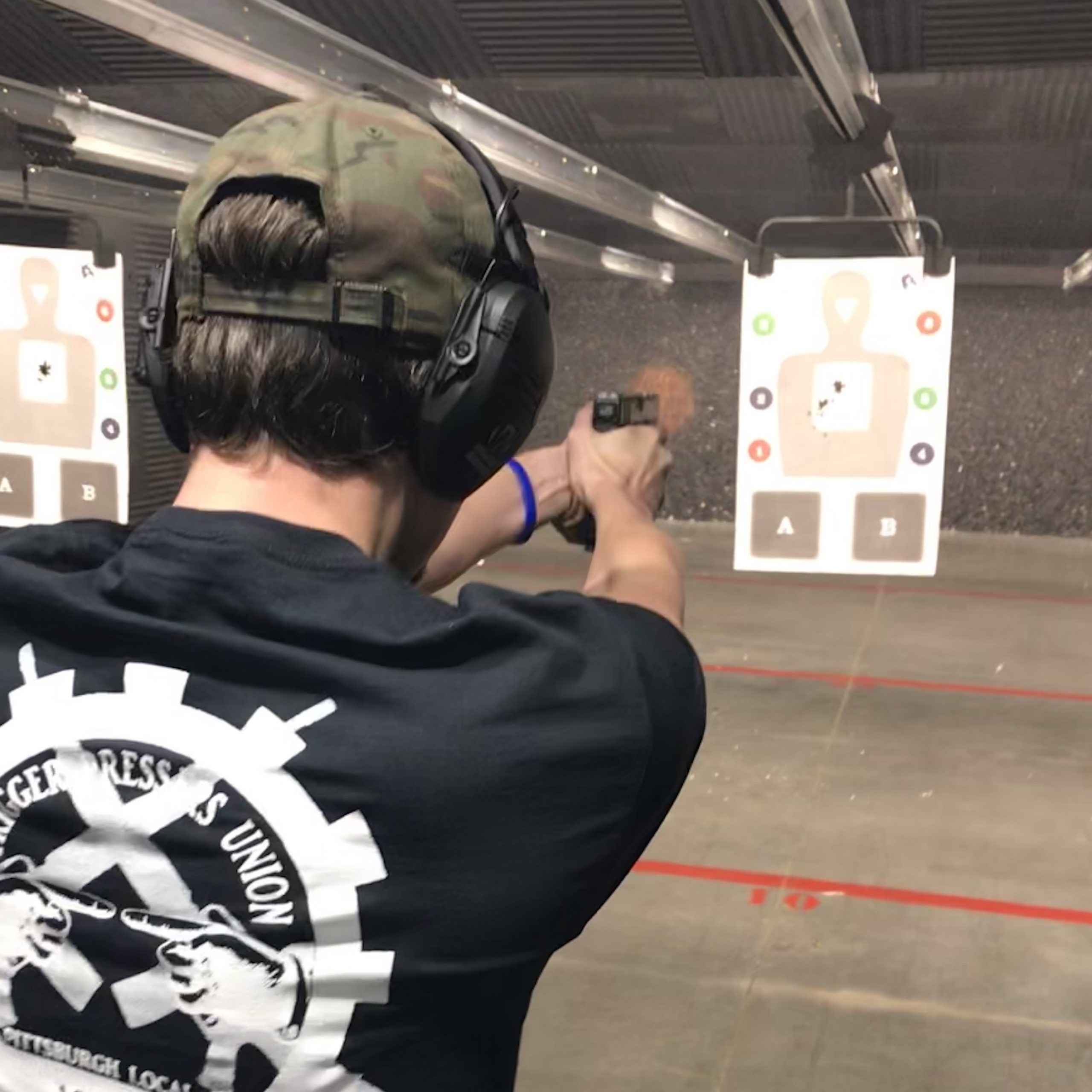 Nobody can hold a gun perfectly still, especially when under attack. Photo: author

Nobody can hold a gun perfectly still. This is impossible even in a controlled marksmanship shooting event on a safe square range, and it is certainly impossible during a violent attack. Although “perfectly still” is unattainable, “still enough” is required. In Project Appleseed it is said, “Don’t let perfect get in the way of good enough.” I believe this rings true in defensive shooting because we cannot let perfect stillness get in the way of racing to that last shot. The last shot is the one that ends the violent attack. 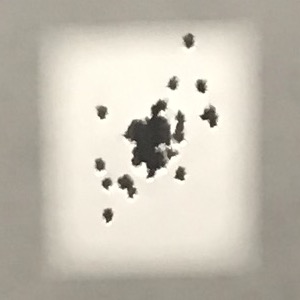 Target 1: Shooter was under-confident or their gun was over-controlled. Photo: author

All shooting is a balance of speed and precision. Fast is indeed a thing, but not at the cost of our hits. We need to have the ability to place multiple rounds onto an attacker as quickly as we can while still getting our hits. Barring luck, our true ability to apply skill in context will determine if we get the hits. As long as you are not panicking, your confidence – or lack thereof – in your awesomeness will determine how fast you shoot.

As I spend many days with many shooters on the range, I can attest that there is also a thing called overconfidence, which results in someone shooting outside of their own competency. On the other hand, I see many shooters investing quite a bit of time to achieve much “perfect-er” shots when they could have gotten away with “much less perfect-er” shots even faster. 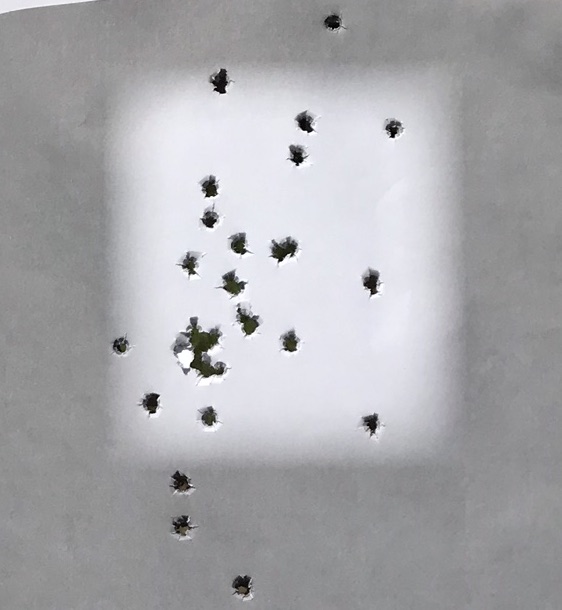 Target 2: Shooter’s gun was under-controlled or they were overconfident. Photo: author

Accuracy is a go/no-go proposition. Either you hit your intended target or you did not. Precision is the allocation of resources needed to get your hits. The words precision and accuracy are often used interchangeably in the gun world, and this causes confusion. They are not the same.

The trick is, it requires a great deal more precision to get the hit on the eye of the flea. But we are not training to defend ourselves against attacking barns or ants. Our attacker will likely be a human being. The default target area on a human attacker should be the high center chest. This is the space on a chest below the collarbone and above the diaphragm in line with the head. All the good guts that keep a bad guy ticking are centrally located in this general spot, approximately a 10-inch x 10-inch area. Not a huge target, but not a small one either. 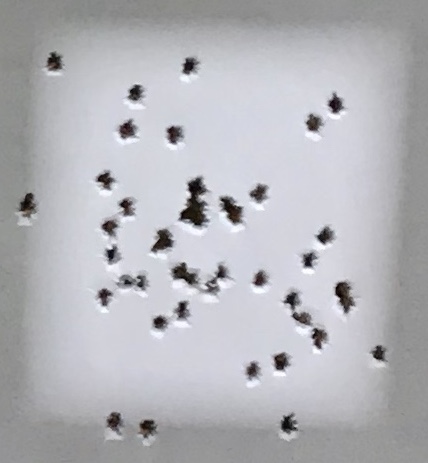 Target 3: Shooter appears to have had a reasonable Balance of Speed and Precision. Photo: author

Even though the head is a big ball on top of the shoulders, there are limited target areas on the head because the skull is very hard, and most pistol rounds are unlikely to penetrate skull bone. The “T Zone” of the nose and eyes is approximately three inches x three inches. This is indeed a much smaller target.

WHAT RESOURCES DO WE HAVE? 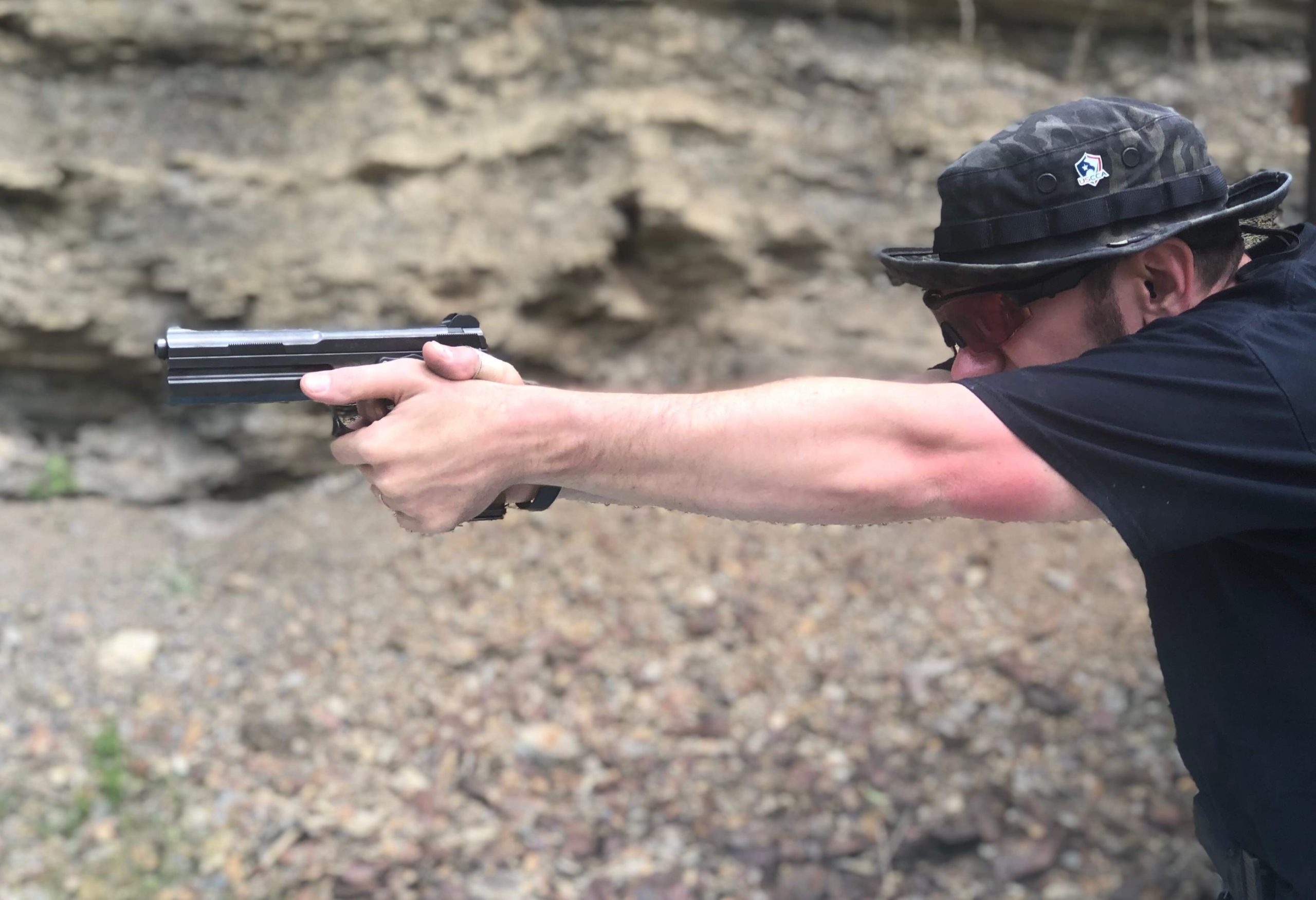 Time is a resource we will probably not have much of if we are defending ourselves or our loved ones. Maintaining a good grip and getting more bone support behind the gun can affect deviation immensely, while also working well with what the body does naturally under stress. Having both arms at full extension, gun into and parallel with the line of sight, arms in front of shoulders and shoulders engaged is like attaching two rifle stocks to your pistol. Combine that with a 360-degree grip — clamping the gun into the meat of the hands with the thumbs pointed generally forward – and it can really limit a gun’s physical movement in space, even when shooting multiple rounds quickly. The more body, arm, and hand support we put on the gun, the less deviation we will have.

THE CONE OF DEVIATION 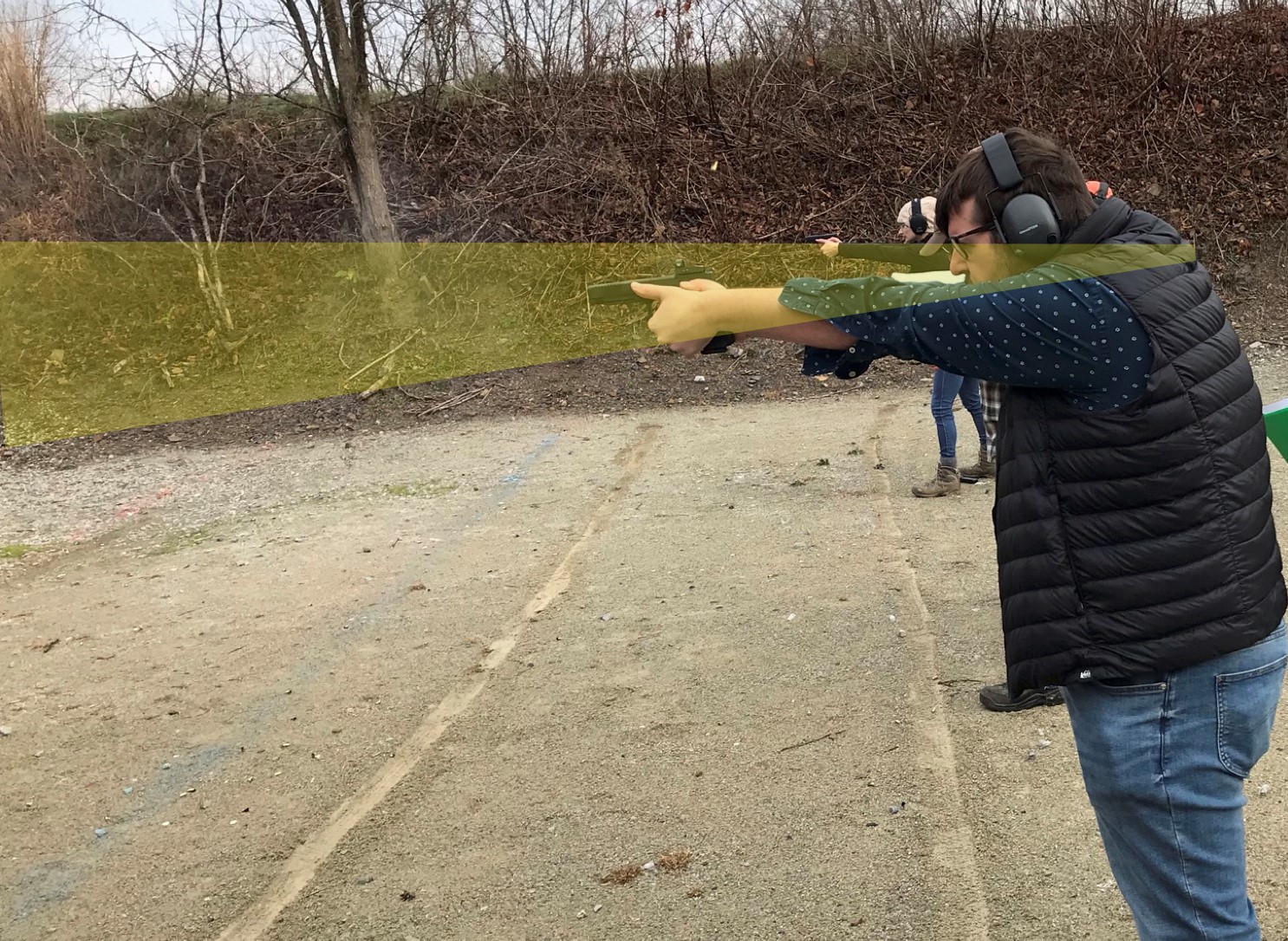 The cone of deviation represents the movement of the gun in space and the potential impact area of your bullets at the target. Photo: author

Think of a slice of pizza. It is small at the center of the pie and gets wide at the crust. The cone of deviation is the same. If you visualize “the cone” while you are shooting, it starts between the shoulder blades, gets bigger at the target, and continues to broaden into infinity. The longer the distance, the more the deviation is magnified. The cone represents the gun’s actual movement in space and the potential impact area at the target. As the cone originates at the shooter, the gun is actually approximately three feet into the cone. What we need to do is minimize the cone at the target, just enough, and make sure the gun is in the center of the cone.

USE YOUR SIGHTS WHEN YOU NEED THEM 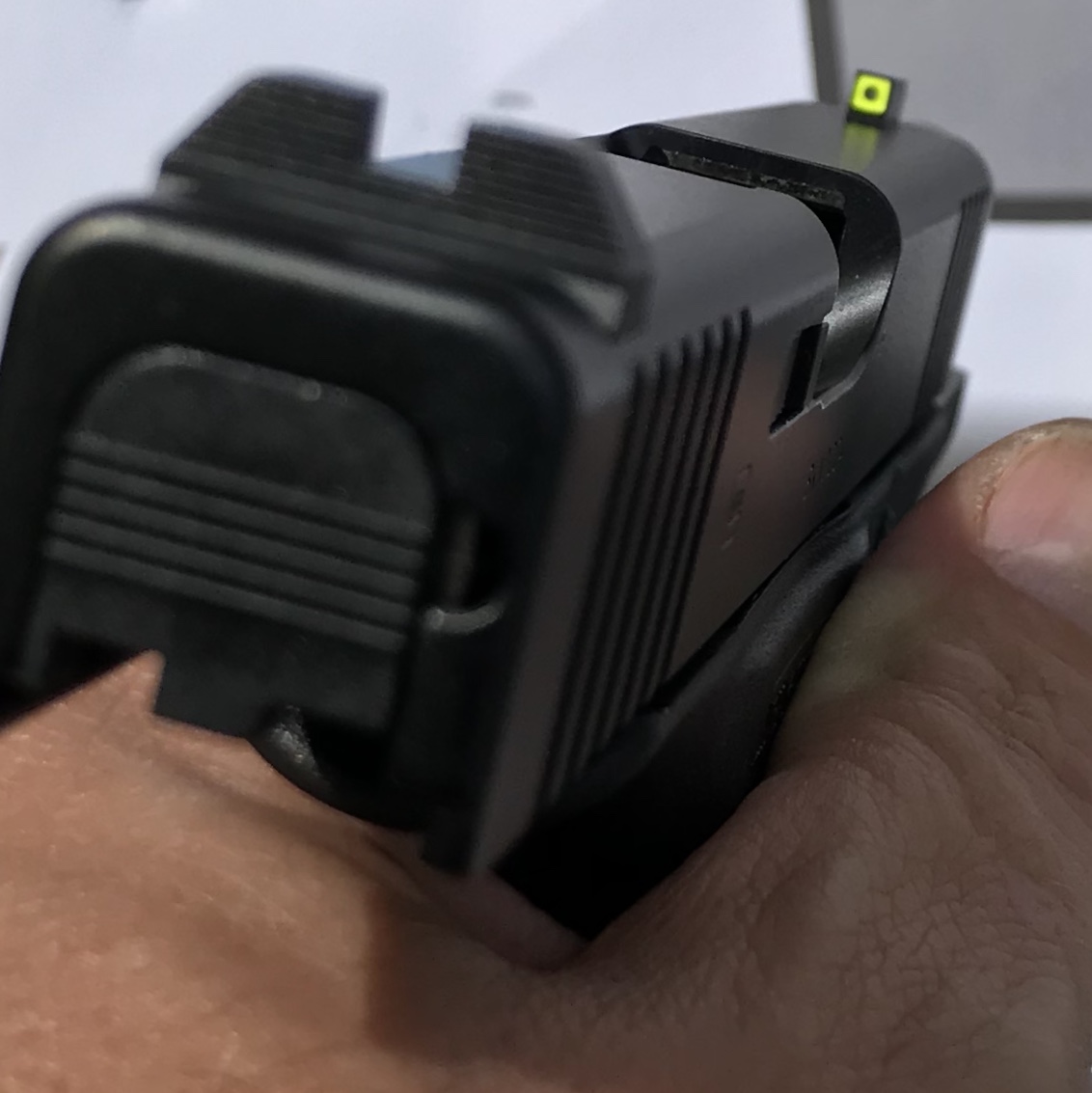 Sights are a measuring device and a potential resource. Photo: author

Another resource we have available to achieve a higher degree of precision is our sights, which help us to align the angle of the barrel in relation to our eye and the target. The sights help us to recognize our deviation in relation to a fixed known reference point. Sights are like a measuring device. Actually, you can use open rifle sights to “range” and measure distance if you know how many minutes of angle wide or high your sights are. When we use our sights, we are much more aware of the deviation going on at the moment.

We can measure how much gun movement is acceptable to us and then dedicate more “support” to hold the gun “stiller” so we can achieve a higher degree of precision. This inherently takes a little more time, as we first need to decide to use our sights, then reduce the movement to the desired level. Don’t discount the time for decision-making! The more you train, the more likely you will be able to recognize under what circumstances you need to use your sights, and close an eye, and focus on the front sight. With lots of correct repetitions, defensive body mechanics will become more intuitive and faster. However, using the sights will still likely be somewhat slower than not using them. 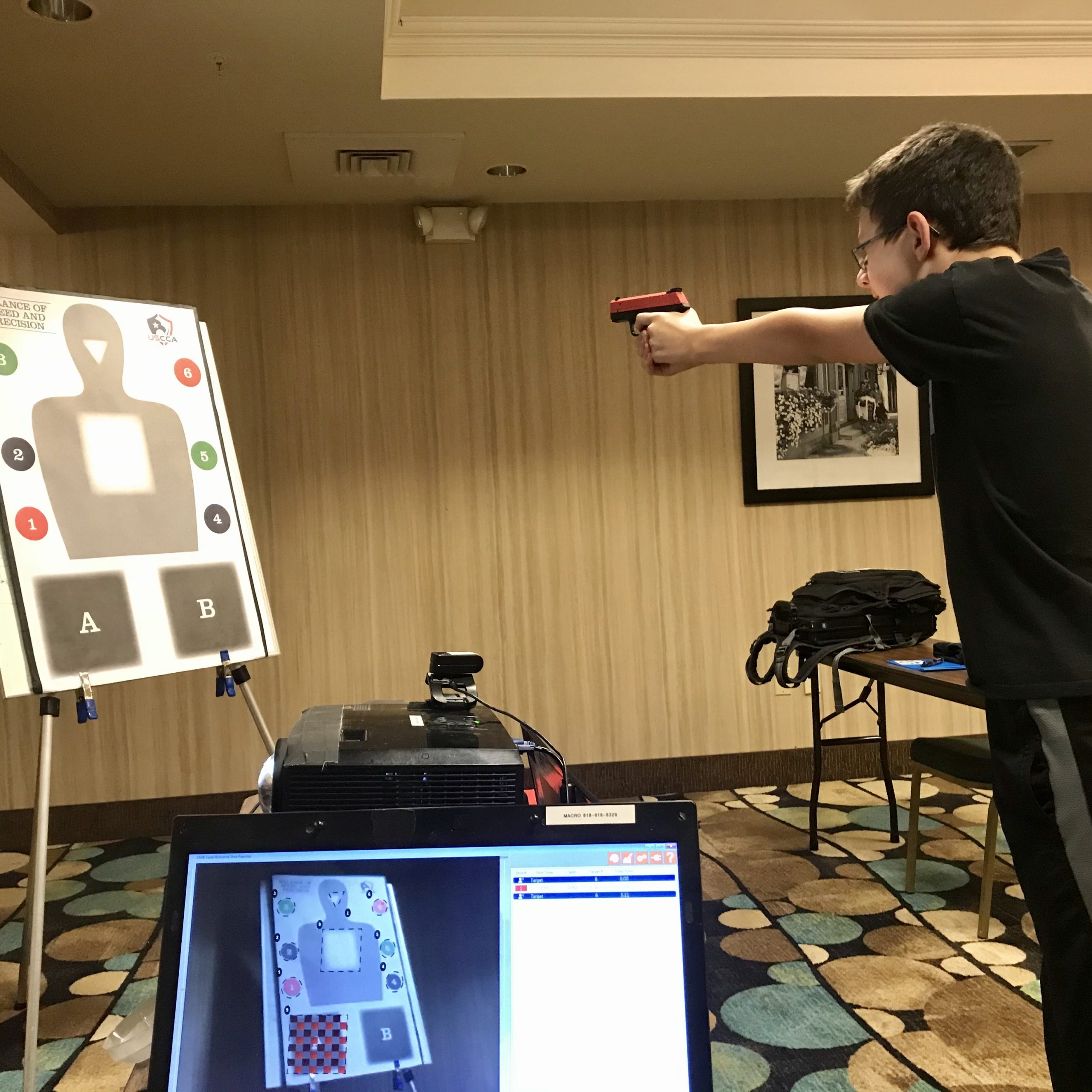 Shoot as quickly as you can while maintaining your hits. Photo: author

If your goal is to stop an attacker as quickly as you can, then filling the entire high center chest with holes will be more efficient and probably faster than just filling the center of the high center chest with holes in a nice tight group. If you consistently shoot four-inch groups on the high center chest, ask yourself, “Am I cycling the trigger as fast as I can, or am I maybe investing a little too much time in trying to get the gun stiller than I need to?” Once you determine the answer, try to shoot faster by controlling the deviation appropriately for your target and cycling the trigger as quickly as you can while maintaining those consistent hits.

Famed American lawman and gunfighter Wyatt Earp was quoted as saying, “Fast is fine, but accuracy is final. You must learn to be slow in a hurry.” Learn and practice as frequently and realistically as you can. Control deviation as much as needed for your target, and be the fastest you you can be, while still getting your hits.

6 Responses to “The Devil’s in the Deviation”