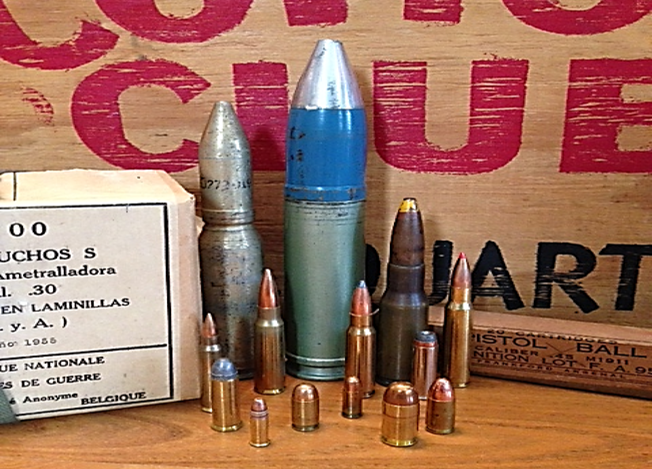 The caliber debate rages on. Do your homework and pay attention to your results. Photo: author

In self-defense circles, the great caliber debate has raged on forever. As firearms technology has progressed, the variety of bullet designs and launch platforms has doubled, tripled, quadrupled … and more. Today, we enjoy an absolute embarrassment of riches when it comes to guns and ammunition. The downside is that it may be harder than ever to choose the right caliber for personal and home protection.

“Experty-type” people are often no help, offering everything from the ridiculous: “I carry a forty-five ‘cuz they don’t make a forty-six!” to the completely useless: “A handgun is for fighting your way back to the rifle you shouldn’t have left behind in the first place!”

What to do? After all, there isn’t much to go on. The bulk of empirical evidence suggests that getting shot by damn near any handgun is incredibly dangerous, but then many variables kick in that make it impossible to identify an objectively “most dangerous” caliber choice. This is why I finally stopped looking at the tools — they’re all pretty similar — and started focusing on the person using those tools. 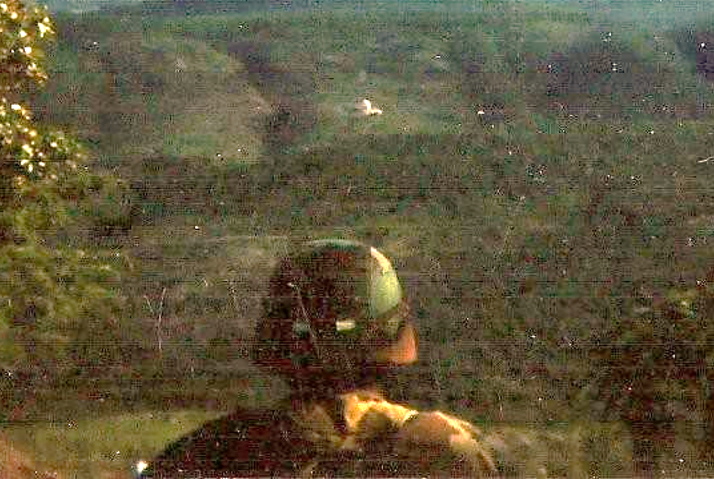 As we all know, fit and feel are very important when selecting a handgun. Just as shoes that are too big or too small will adversely affect our comfort and speed when walking and running, a handgun that is not a good fit will limit our ability to shoot well and consistently. But feel can’t be overlooked either — after all, there are lots of different shoes in our size that we just don’t like and are never going to buy and wear.

Feel also has a place in caliber selection. When I was a soldier, I worked as a Forward Observer, which means I located targets and acted as the eyes of the artillery or air support to destroy those targets. In this capacity, I saw thousands upon thousands of big high-explosive rounds do their thing, usually from a couple kilometers away. At that distance, they aren’t very impressive. Unlike in the movies, there is rarely a big exploding ball of fire. There’s usually just a big geyser of dirt that lingers in the air for a while. A volley of several rounds might impact the same general area, resulting in a whole lot of dirty haze floating around.

My point is this: the sight of the artillery shells exploding did not communicate their violence, even though I knew what kind of havoc they were causing on the ground. It was the concussion — coming like a tidal wave seconds after the impact — that told the story. It was a thunderous crash accompanied by a stomach-lurching sonic tremor that seemed to originate in my own pelvis and burst outward. I didn’t just see this power … I felt it! 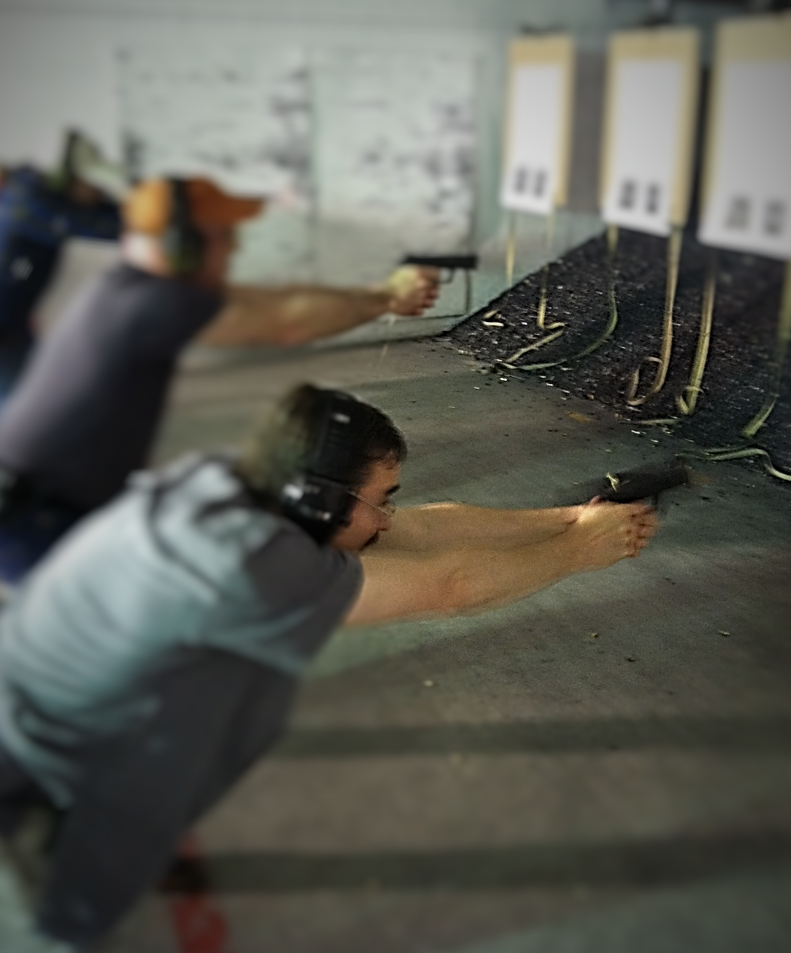 Recoil must be experienced and then managed. Photo: author

As I shoot a gun, I feel the blast and recoil transmitted back to me. The more blast and recoil, the greater the sensations of energy and force. The more energy and force available, the greater my belief in its ability to affect my target. Of course, there is a limit to how much energy and force I can actually handle. It really comes down to finding a caliber over which I can exert maximum control but one that still earns my confidence with its energy, which I feel every time I press the trigger. It should go without saying that I am not going to figure these things out by reading articles and watching videos. I can only discern where this is going to be by shooting live ammunition through real guns. Alternatives and enhancements such as dry fire and laser simulation have a place in my defensive preparations, but only after I’ve done the live-fire homework.

Think back to your earliest shooting adventures, or any time that you’ve seen a novice taking their first shots. Shooting a gun is a startling experience, and we often hear beginners exclaim that they didn’t realize it had so much … power! And for most of us, it isn’t too difficult to equate what we feel on the one end with something that is happening on the other. When we first began shooting, whatever gun we fired grabbed our attention. I recall being surprised at how much effort and focus it took for me to fully control and shoot with precision that little Winchester .22-caliber gallery gun. And I found a sense of accomplishment and empowerment: that trusty Winchester and I could hit what we aimed at, no doubt. 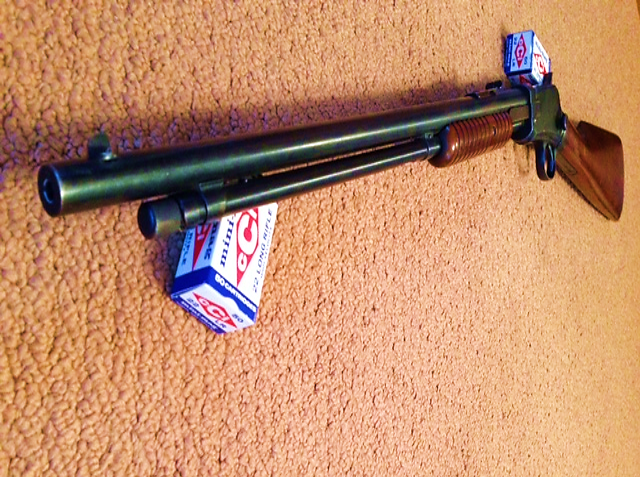 My nifty little Winchester — the rifle that started me thinking. Photo: author

As time went on, my shooting experiences broadened and my tastes and interests evolved. Today, as a somewhat seasoned and definitely jaded gun junkie, that little Winchester is still a hoot to shoot. The difference is, while I will always respect and enjoy it, I’m not sure how quickly I would place my trust in it as a defensive firearm. The pop of that little rimfire round inspires noticeably less confidence than the bang from its bigger brothers.

Caliber selection is really a kind of subjective alchemy that I believe consists of one part science blended with two parts faith. The science takes care of itself sooner or later, because it embodies objective things such as gun fit, gun operating system, and all those bullet design, weight, velocity, and diameter factors that we know will contribute to some greater or lesser degree.

My two parts faith are:

1. Faith in my ability, through training and practice, to efficiently control my gun and its recoil.

2. Faith in the power of my ammunition to deliver the needed force. 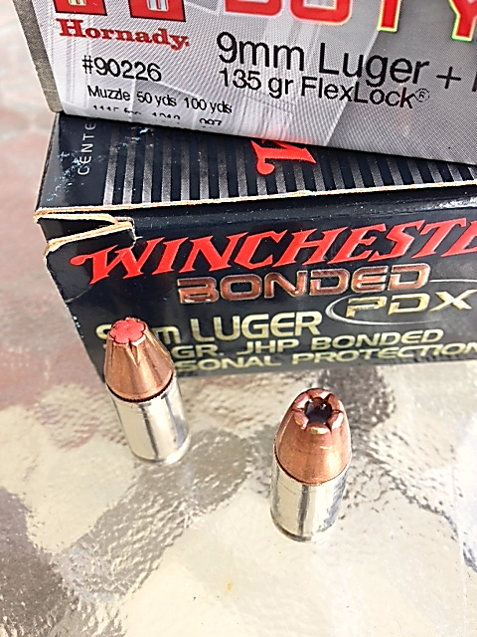 Modern jacketed or bonded hollow-point bullets are a must, regardless of their caliber. Photo: author

The binding agent that holds science and faith together is logic, which at some point needs to support my faith. In this context, logic tells me that a modern center-fire handgun is a better choice than a flintlock pistol for personal defense. Contemporary automobiles are better for day-to-day convenience than horse-drawn buggies, and restroom facilities beat outhouses, no contest. Logic also demands that the bullet in which I place my faith is of the modern jacketed or bonded hollow-point configuration. These are the only projectiles designed for the purpose of efficient personal defense, and our faith in the subjective feel of our defensive caliber must assume their use.

The faith in caliber selection also includes my admission that I don’t have much information about a self-defense shooting that isn’t happening yet. I am therefore trying to predict what my little handgun bullets will contribute to a big, ugly, immediately dangerous and completely unknown situation.

As a private citizen who doesn’t go out of his way looking for trouble, I also put considerable faith in not being around dangerous people doing dangerous things in dangerous places. However, there may come a time when the definition of what is “dangerous” isn’t up to me. The attitudes, techniques, and tools that I have chosen through research, critical thought, and personal experience will be on the line. My gun and ammunition must be paired with logic and evidence to have earned my trust for the coming moment of need. And in armed self-defense, that’s a pretty good description of faith.