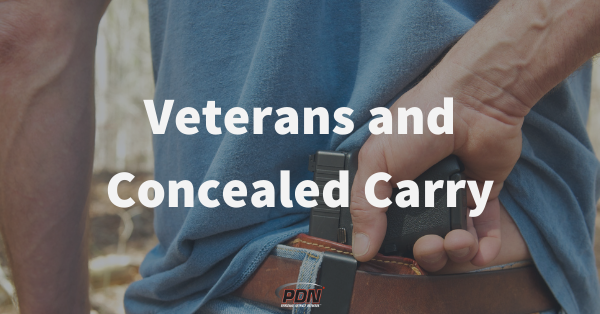 When it comes to Veterans and Concealed Carry, many states offer them a chance to obtain a permit utilizing their DD214, Certificate of Release or Discharge From Active Duty, as proof of firearms training. This is a great benefit for veterans and allows them to exercise their rights under the Second Amendment, however, does military training alone prepare veterans for concealed carry?

When pistol marksmanship is taught, it is taught from the perspective of offensive military operations. Side arms are considered secondary weapons to be employed in the tactical environment when the primary weapon, the service rifle, malfunctions or is out of ammunition. Unless the service member is in an elite unit, handgun training that is offered is, in general, outdated and has not evolved to employ best practices from the civilian training industry. The U.S. Army training manual, Combat Training with Pistols, FM 3-23.35 actually recommends such varied techniques as the teacup grip and shooting over ones shoulder, one handed, as one “traverses”. I think it is safe to say that this deficit alone would make veterans want to get additional training before carrying a handgun as the primary defensive tool in a public space.

Service members are trained after infiltration to acclimate themselves to the sights and sounds of the battlefield. On this battlefield they operate in highly trained and tight knit units. They work as a group to accomplish the mission objectives within the rules of engagement (ROE). The battlefield and their reactions to it are shaped by this mission and the ROE. This is a different environment than the environment a veteran will encounter as they go about their daily civilian routine. The veteran’s environment is shaped by many things, family, friends, work, and the general public. All of the stimulus may or may not impact the veteran’s ability to react to a defensive situation.

Rarely will the veteran have the ability to work as a group in a highly coordinated environment. The veteran is essentially on his own. Without additional training on awareness, avoidance, and how to interact with the public and law enforcement, the veteran is at a disadvantage. Veterans cannot superimpose the military ROE onto the civilian environment. Doing so undoubtedly will result in legal issues and potential incarceration. As a responsible concealed carrying individual veterans should be familiar with the local laws and ordinances as these laws and ordinances relate to concealed carry. Veterans should be willing to acquire the training necessary to deal with these civilian rules of engagement.

It is often said that soldiers do not fight for any philosophical thoughts of democracy or notion of morality. It is said when the rubber meets the road and pointy bullets are flying, they fight for each other. In this way veterans are prepared to defend themselves and others should they need to. Veterans will generally have the necessary mindset to employ whatever means are necessary in this defense. However, military training alone does not prepare a person to deal with a violent encounter in the parking lot of the local shopping mall. It is incumbent on veterans who have a culture of recurring training and high standards to police themselves. Veterans should be the first in line to acquire training to help them develop as responsible concealed carriers. At a minimum training on local laws, managing unknown contacts, marksmanship in the context of a dynamic critical incident and post incident actions should be acquired. Veterans should not use their honorable service as a trump card to avoid training, putting themselves and others at risk.

-Michael McElmeel
[Mike retired from the US Army, after 22 years of service, as a Senior NCO assigned to a Special Operations Unit.]

26 Responses to “Veterans and Concealed Carry: How Important is Training?”