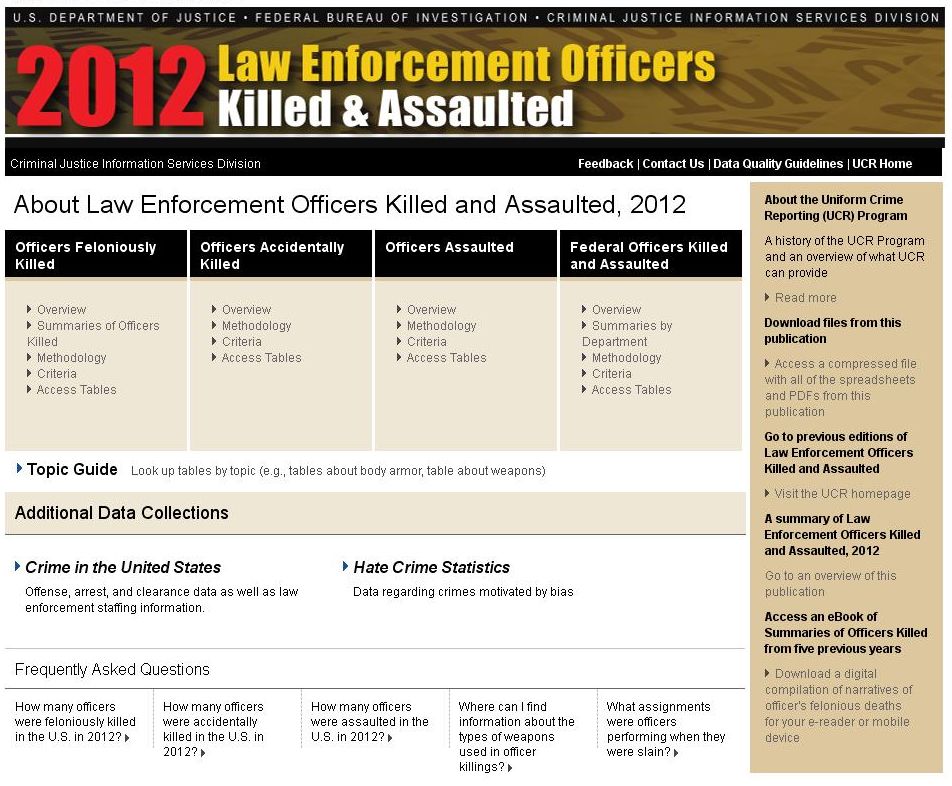 Not as much as many people would lead us to believe. We frequently hear claims like: “Check out the stats, man, it’s always at 20 feet or less, and nearly always at 10 feet or less.” Or “that zero to three feet distance that most gunfights take place at in the real world.” Various figures are cited as the source for these contentions, most commonly “the FBI.”

Well, neither of those statements can be proven true based on the information supplied by “the FBI.” The available facts are actually a lot less conclusive than many people portray them as. Consequently, there is a great deal of unsupportable extrapolation of the facts that do exist.

The data that is being referred to is compiled and published as part of the FBI’s annual Law Enforcement Officers Killed & Assaulted report, which is available to download from the FBI’s website. It is published around the end of October each year for incidents occurring the previous year.

Since LEOKA 2012 has just been released, let’s examine the assertions about them. Unfortunately, the FBI does not gather information about distance of gunfights in routine submissions to the Uniform Crime Reporting (UCR) Program. The only information on distances is gathered as supplemental data in cases where police officers are actually killed. These data are compiled in Table 36 — Distance Between Victim Officer and Offender, 2003–2012, in the current report. However, this table reports only a very small subset (44) of “gunfights” police engaged in. The data that is collected about the total number of police gunfights (2,259) is compiled in Table 70 — Type of Weapon and Percent Injured, 2003–2012. No distances are provided in this table. 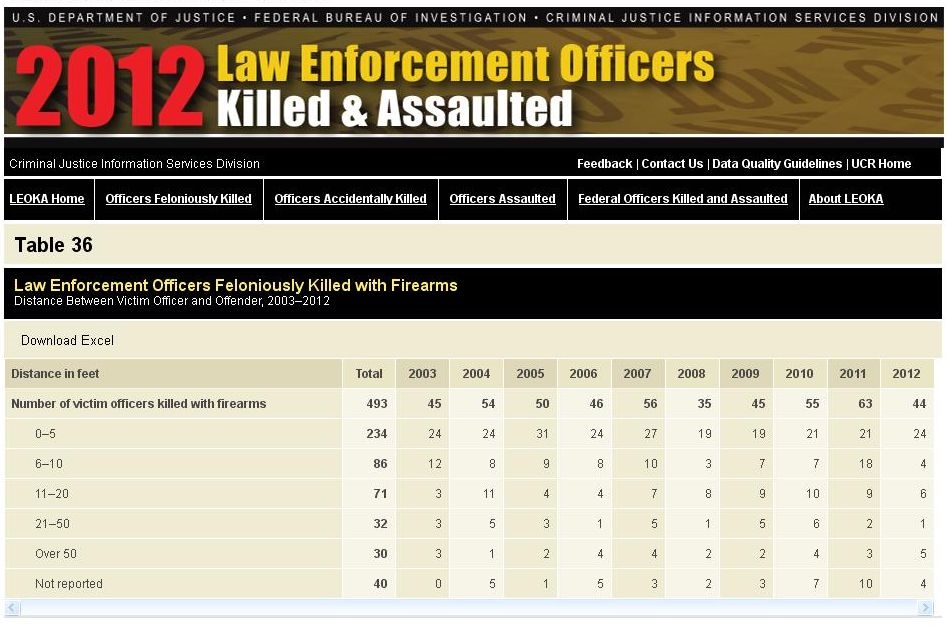 Even the data in Table 36 must be interpreted carefully, because the distance given is for where the officer was actually killed. For example, in a previous year, a State Trooper returning home was ambushed from across the street at a distance of 35 yards with a rifle and severely wounded. His assailant then walked over to him and executed the Trooper at close range with a handgun. Since the Trooper was killed at almost touching distance, he was reported as a zero to five feet casualty. But the “fight” actually took place at 35 yards.

Table 70 does list an interesting piece of information that provides a reality check on the “zero to three feet distance” assertion. Of the 2,259 Assaults with Firearms, only 9.8% resulted in injury. However, 13.2% of the officers who were assaulted with knives or other cutting instruments were injured. Statistically, it seems unlikely that within the same zone of influence, knives would result in a 35% higher casualty rate than firearms. 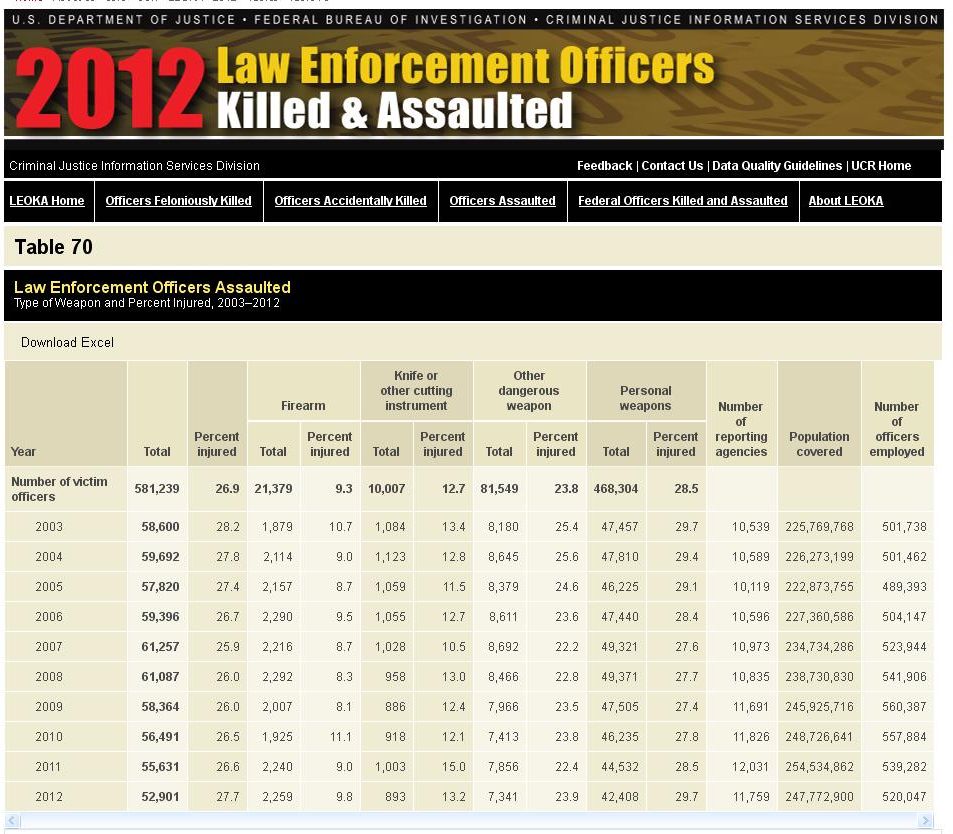 Over the past ten years, injury rates for firearms have been the lowest of all weapon types: 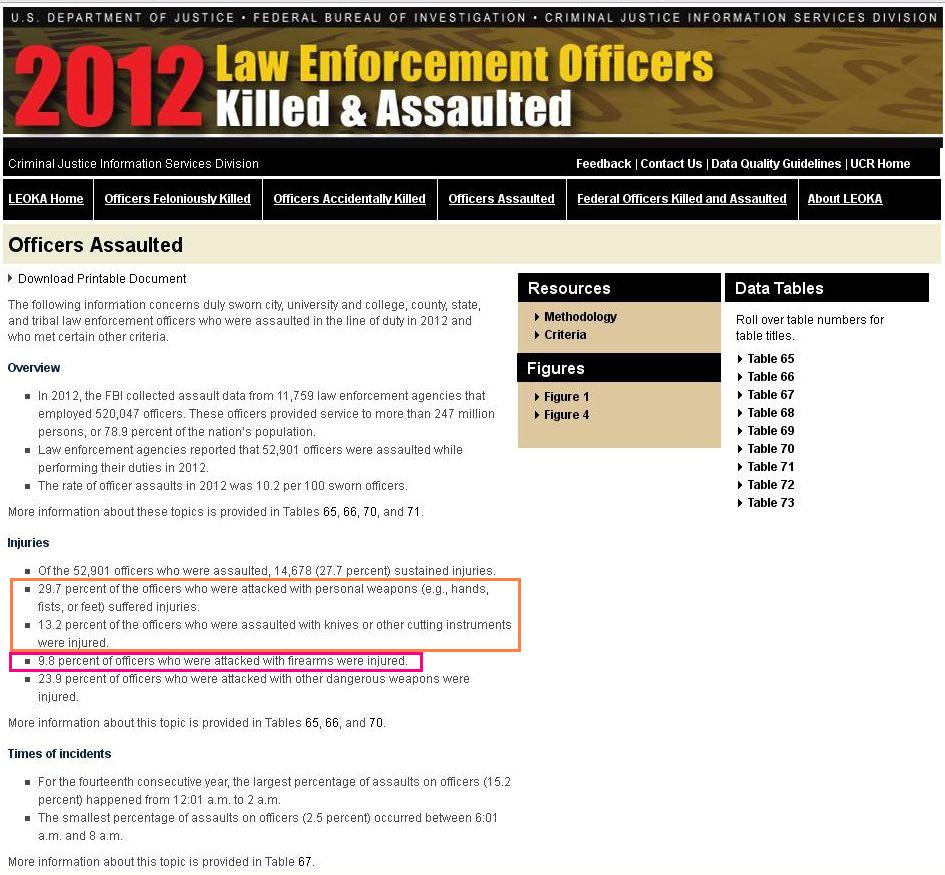 A more justifiable assertion based on the data in Tables 36 and 70 would be that if a police officer is shot (at) by a criminal at a distance of under five feet, the possibility of death is high. The data gathering and analytical capabilities of the FBI and UCR are probably not necessary to arrive at that conclusion. The only study that actually looked at distances of gunfights in a detailed and methodical way was done for Police Marksman magazine by Richard Fairburn in the 1990s. The average distance reported in that study was 14 yards.

Another frequent claim goes something like, “There’s a commonly held and cited statistic that three out of four times, when officers are killed during shootings, it happens in low light.” That “commonly cited statistic” is a fallacy. 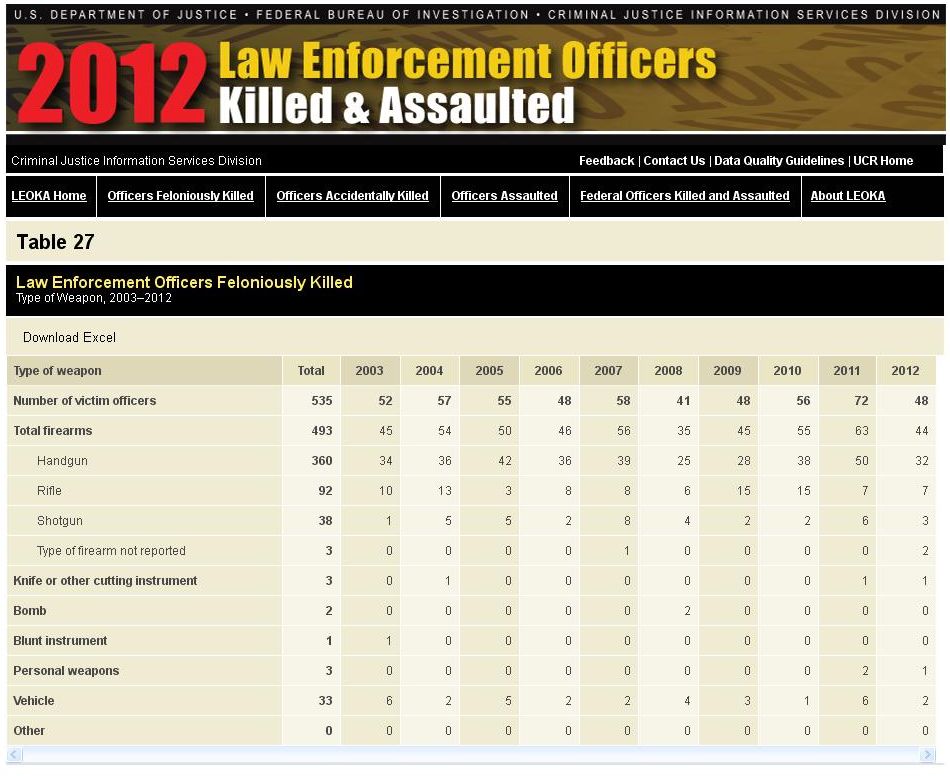 Of the 64 incidents reported in the 2011 Summaries, only 36% took place between the hours of 2100 and 0700. Of those, in only one incident would a flashlight have had any relevance whatsoever, and even that incident is questionable. For instance, if an offender uses his car to run an officer down at 12:20am, a flashlight is unlikely to help the situation. This isn’t to say that flashlights aren’t useful. However, when using statistics as the underlying premise for an assertion, they should be researched for veracity, rather than be “commonly cited.”

The purpose of this article is not to say that gunfights and shootings don’t take place at close range but rather that stating “the FBI” says they do is incorrect. Statistics can be useful, but their data collection methods and interpretations must be well understood before the final product becomes useful intelligence. And the actual source for the statistic must be determined and vetted to be real and appropriate. If we’re going to use numbers as a basis for our training and decisions, let’s get them correct.

23 Responses to “What Do FBI Statistics Really Say About “Gunfights”?”