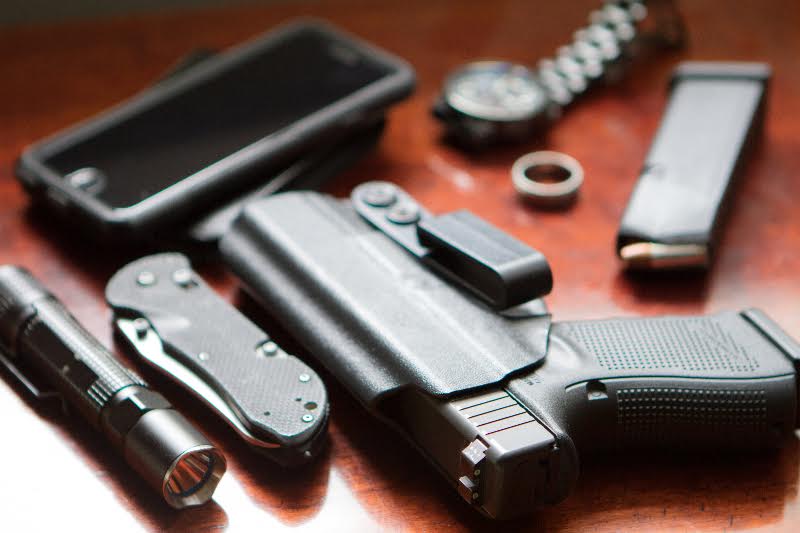 Author’s EDC gear is the Mandatory 5: items that everyone should carry! Photo: author

When I get dressed to leave my house every morning, I carry five things, as long as they’re legal where I’m going. These are, of course, in addition to my watch, wallet and other such items. But you can bet that every time I slip on my jeans, I will place in the appropriate pocket or on my belt, my Glock 19, a spare Glock magazine, Cold Steel Voyager knife (5¼-inch blade), cell phone, and Streamlight ProTac 1L flashlight. In all the classes I teach, I preach that everyone should carry these Mandatory 5 items whenever and wherever they are legally allowed.

However, I travel a lot for work and pleasure and in some places, for legal reasons I am unable to carry all of my Mandatory 5 items. When I have to pare down my Mandatory 5 items, the tool I always can and do carry is my Streamlight PT 1L. This may come as a shock to those who know me as a hard-core Glock-totin’ kinda guy. But those who travel frequently understand the pain associated with putting your favorite friend in the safe because you know you’re going to see a TSA agent later that day!

My EDC is normally a Glock 19 with spare magazine and quite often a BUG (Back Up Gun), my Voyager knife and sometimes a spare knife, and my flashlight and – YES – often a spare flashlight. My flashlight has become the one tool in my defensive toolbox that I can legally carry anywhere and everywhere. I place the palm-sized flashlight into my pants pocket whenever I get dressed.

The Flashlight: Don’t Leave Home Without It

I know people who carry guns, spare magazines, and knives but have never given a thought to carrying a flashlight. Some may even have a light on their gun but nothing they can readily palm in case they need light without their firearm. Some law enforcement friends of mine would never step out of their patrol cars without some sort of flashlight in-hand, yet off-duty they don’t carry any light-producing device except their cell phone. 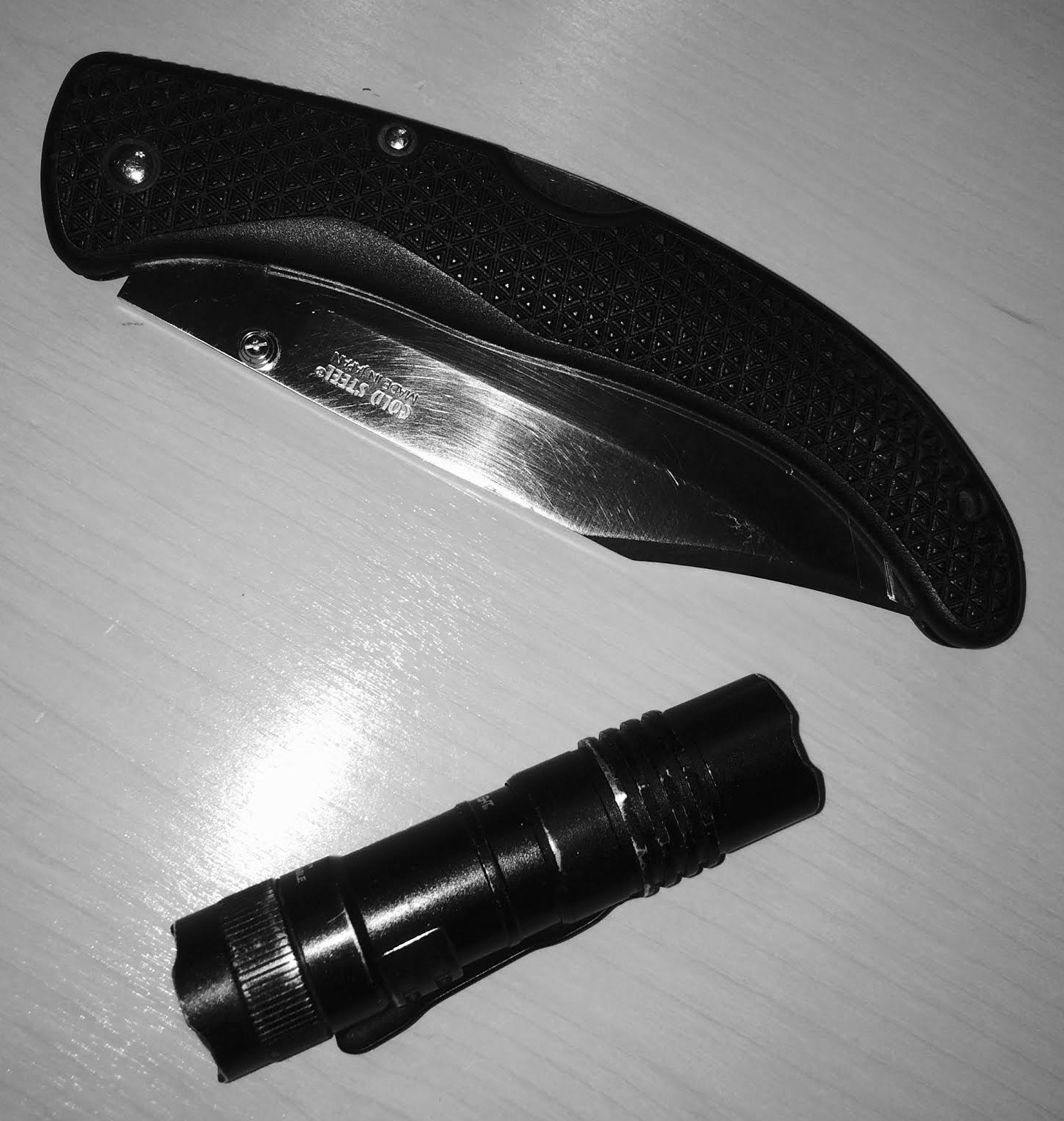 I can’t remember why I started carrying a flashlight, but I do remember when I decided I’d never be without one. And it had nothing to do with a dynamic critical incident. It was simply after taking care of some personal business in a coffee-shop restroom. I was straightening my clothes and preparing to reholster my firearm, which I had set next to me in order to do what I needed to do. And without warning, the power to the building went out. Suddenly I was in the dark, not quite fully dressed, with my firearm somewhere within arm’s reach. My initial shock was replaced by mild chagrin at my compromising situation, but I quickly remembered the flashlight in my pocket. Once I shed a little light on the subject, I was able to finish the task at hand, reholster safely, exit the area, and even provide a little light to the customers who were being asked to gather their belongings and leave the restaurant so the employees could lock up.

The other things I frequently find on the receiving end of my 180-lumen beam of “sun” are the tires of my car when I approach it at night. There’s nothing more frustrating, or dangerous, in life than having to stop on the side of the road at night because of an errant screw or nail that someone dropped in a parking lot at the local hardware store. There’s also no better way to endear yourself to another person than to stop and help the hapless victim of a flat tire. But maybe the person who stopped to help was the one who placed the nail in order to get the unsuspecting person out of a busy parking lot – before they have a flat tire – so he can get close to his intended victim by pretending to be their savior on the side of a lonely road? This sort of thing can be avoided by a quick check of the tire area before backing from your parking space at night. A small flashlight in your palm can mean a lot less headache later.

I also frequently shine my flashlight into automobiles. This may seem inappropriate to some, but if it’s dark, a car is next to mine in the parking lot and I can’t identify whether someone is inside the vehicle or not, I feel it’s well within reason to ensure no one in that automobile is going to be a threat to me or my loved ones. Rarely do I, or most gun guys, put ourselves into a tight, enclosed space with almost no way out (the proverbial Fatal Funnel), except when we are standing between two cars. And quite often, we’ll allow a complete stranger to occupy that space with us and get well within our comfort zone. Just look around any grocery store parking lot during a busy shopping time and you’ll quite often see strangers sharing that very small, very narrow, very tactically non-compliant space in between their two cars.

I’m not saying you should be rude and not share the space in between your car and another’s. But it behooves you to somewhat control this environment and know whom you’re sharing this space with. At least if I’m aware a person is in the vehicle next to mine, this removes the element of surprise if that person exits their vehicle while I’m loading groceries into my car. 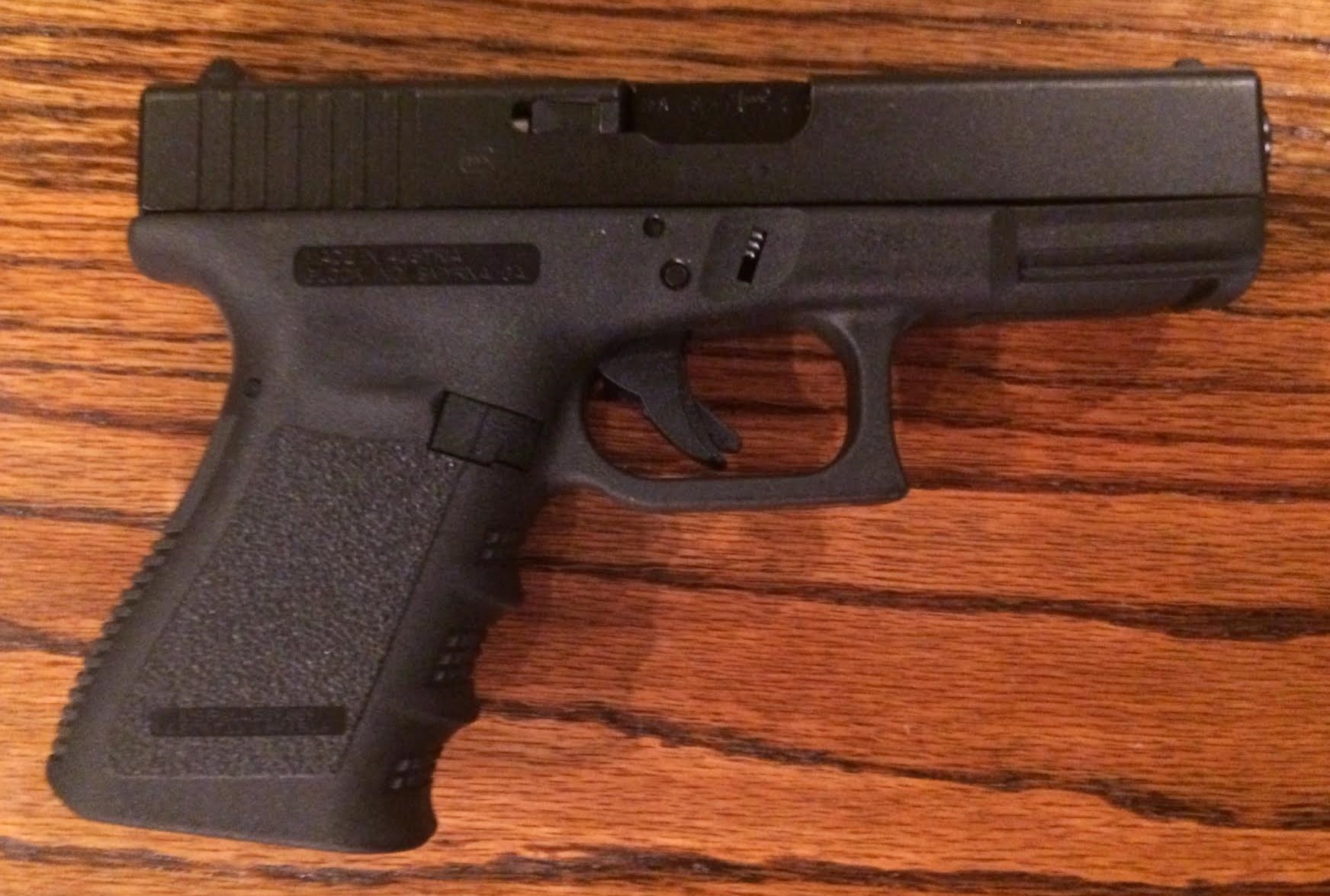 Another advantage of carrying a flashlight is the capability of “shedding light” on a situation. A few years ago, I was on a business trip to a non-gun-friendly state that sits on the far left side of the country. Unable to carry a firearm, I was legally equipped with only my knife and flashlight. While walking from a distant parking space to a restaurant across a dark parking lot one evening, I observed a disheveled young adult male pushing a bicycle and approaching me in the car-filled lot. As the man got closer, I noticed that his mannerisms were consistent with someone “scouting a target.” He appeared fidgety and was doing the felony-furtive look, his head turning, looking over each shoulder repeatedly. He appeared to be intently focused on me but was not attempting to gain eye contact. His eyes were scanning my clothing, jewelry, and mannerisms.

Not knowing if the man was a threat or simply a person needing directions, I made sure to examine my surroundings and watched as he approached, but continued to move toward the more populated restaurant. It became clear he was going to make an attempt to contact me. I had my flashlight in-hand as he moved closer and positioned the bicycle between us, somewhat blocking my forward path. He then proceeded to ask for money. Since he was pushing a relatively expensive bicycle, in a friendly manner I told him I didn’t carry any cash, then tried to move around the man and his bike. He made an obvious attempt to block my path and continued to now aggressively panhandle for cash. I felt his attempts were going beyond simple panhandling and his aggressive nature called for a response on my part in order to exit and control this situation. With two quick taps on its base, my flashlight went into strobe mode. I placed the obnoxiously pulsing 180-lumen light on the man’s chest and used the distraction to side-step his bicycle and get two steps past and slightly behind him. I then used the flashlight to illuminate the entire area between us.

The distraction had its desired effect. Momentarily dazed by the light, the strobe, and I believe the simple fact that his intended target had the capability to light up the entire surrounding area, the man jumped on his bicycle and rode off into the night. The entire situation was defused and over within seconds, with no harm, no threatening action taken, and no one hurt.

The benefits of a small, palm-sized light have manifested themselves many times over in my life. From simple power outages to items dropped under a car at night to potential threats averted. For most gun-guys, our go-to EDC is our favorite firearm. But when you can’t carry your favorite, do you have another way of averting danger? Do you have a plan for avoidance and non-lethal response? If not, consider adding a small flashlight to your EDC. You’ll be surprised how handy it’ll come in, day after day.