Reading the title of this article, you may think I’m going to say the .380 is just not powerful enough. That it is not capable of being up to the task of self-defense. That it is just a “pea shooter.”

I would be lying if I said I think .380 is the “best” caliber, but it does have its role in defensive pistols. Small “mouse gun” type semi-automatic pistols utilize this round quite well. With modern ballistics and bullet design, it does fall into the “capable” category. It does not have the penetration of other calibers and does not meet FBI ballistics standards but is still the best option in these ultra-compact defensive pistols vs other caliber options. So if I believe the round is the best in this context, why don’t I like the .380 ACP? 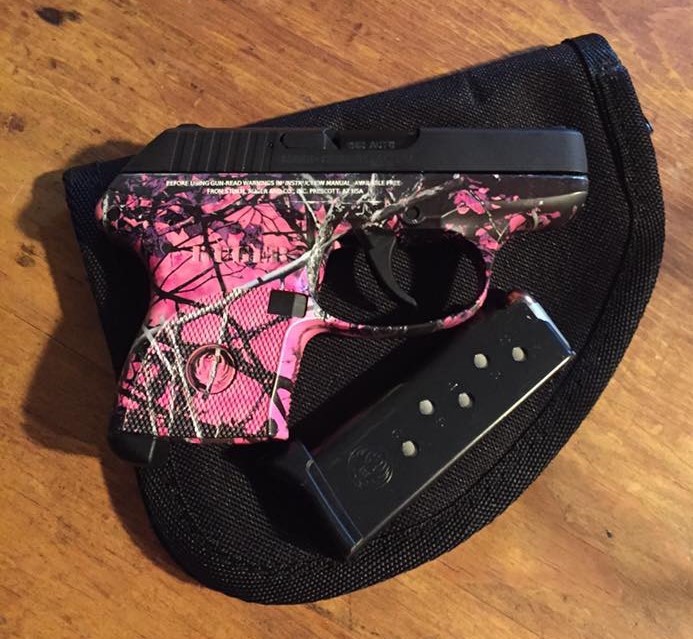 A friend received this Ruger LCP with pink camo as a Christmas present.

Marketing is the real problem here, with the guns available in .380 ACP being marketed as concealed-carry guns and given to first-time shooters. Even worse, they are specifically marketed to new female shooters, with pink and purple colored frames. I can tell you from my experience that many women come to class nervous about shooting — and many times I have had women who did much better than their significant other, who claimed to be a “gun guy.”

Many female students come to my Intro to Defensive Handgun courses with .380 ACP firearms, in particular Ruger LCPs. When I ask them why they chose that gun, many of them say it’s what the guy at the counter recommended when they said they were looking for a concealed handgun. When I tell them the gun is harder to shoot than a larger 9mm, they look at me like I’m crazy.

If we look at the .380 ACPs widely sold, most of them are Double Action Only, with the Ruger LCP being the most popular. The Smith & Wesson M&P Bodyguard is another popular example of the small DAO variety. These do meet the criteria for what I consider a defensive pistol, but they are not beginner guns. The long DA trigger amplifies deviation. The release of the Glock 42 in 2014 provided a solution to this problem and filled a large void in the striker-fired category. But the Glock 42 is nearly double the price of the LCP at my local gun store. For an experienced and knowledgeable shooter, the Glock is well worth the price.

Another reason it’s harder to shoot these small .380 ACPs is they have less grip area, making it more difficult to get a good grip and therefore tougher for students to learn how to properly grip a defensive pistol. To grip an ultra-compact pistol, you must slightly modify your standard two-handed grip due to the thinner and shorter grip. Most of these models do not have enough height on the grip to be able to place the pinkies on the bottom of the grip. The shooter must slow down to control recoil.

The biggest issue with this marketing is that, since the .380 is a less powerful cartridge, .380 pistols are marketed to new shooters as having less recoil. Having shot many firearms and a number of .380s, I can tell you they do not have less felt recoil than many of their bigger brethren. I once had a student bring her husband’s Micro Desert Eagle to class for me to shoot. Firing it was a blast (pun intended) but it was also possibly, with the exception of some large-bore magnums, the hardest gun I’ve ever fired to manage recoil on. With its small 2.22-inch barrel compared to the 2.75 of an LCP, it had far more felt recoil.

Firearms work off pneumatics (gas pressure), similar to how a pea shooter works. Put enough pressure behind the bullet and it flies downrange. Firearms just do this very efficiently and with far greater pressure, which causes the recoil when released from the muzzle. This gas pressure is dissipated through a longer barrel and therefore the length of the barrel has a significant effect on the felt recoil. To test this, go out and fire a .22LR in a rifle and then in a pistol. You will notice a pistol has more recoil and a louder sound than a rifle. The lower pressure of the ultra-compact pistol’s cartridge is offset by the shortness of its barrel, giving it the same if not more felt recoil than a full-size 9mm. To a new student who just purchased a less-powerful defensive firearm in an attempt to avoid recoil, this can be scary and lead to their not continuing training.

Another reason I don’t like these ultra-compacts for beginners is the lack of area on the gun to perform manipulations. Techniques such as racking a slide properly are much easier and safer to learn on a larger firearm. When the slide is racked to the rear, it opens the ejection port — a large hole where the empty case comes out. This large hole needs to be avoided by your hand to prevent it from blocking the cartridge or, in the case of malfunction clearing, the empty brass or bad round from ejecting. Although this is bad, it is not the worst thing it can cause for a new student.

With the slide taken off the frame and the barrel removed, the ejection port becomes very obvious. The serrations on the back of the slide are meant to be where to grab the gun when racking to avoid interfering with the ejection and injury. Photo: author

Early in my career as an instructor, I took the NRA Personal Protection in the Home course as a student prior to taking the instructor course. An elderly lady in the class had an LCP and several times when she attempted to rack the slide, she got her hand stuck in the ejection port. This happens when someone new to defensive pistol rides the slide forward and has their hand over the large hole that opens. When you move forward, it closes and any skin caught in it gets a nasty bite. The woman actually had the pistol stuck to her hand several times and needed help to get it off. Not only was this embarrassing but also extremely painful and caused bleeding.

This is not the only time I have seen this happen but it was the worst, since she did it multiple times. With proper technique for someone experienced in defensive shooting, this is not an issue. But again these pistols are marketed to beginners and more specifically females. The longer slide of a mid- to full-size defensive firearm offers more area where the serrations are for you to manipulate the slide without risking this.

The other issue I have seen many times from these ultra-compact .380s is slide bite. This happens when your hand is gripping too high on the back of the pistol. When you fire the pistol, the slide comes back and can slice the webbing between your thumb and index finger. This is more prevalent on ultra-compact .380s because they do not have as large a beavertail on the back of the pistol to guide where your strong hand should be placed. On mid- to full-size pistols, this large curve would make it very awkward to get your hand over the top of it to interfere with the slide. But an ultra-compact is much easier to grip over the top of this curve and get your hand bitten by the slide. 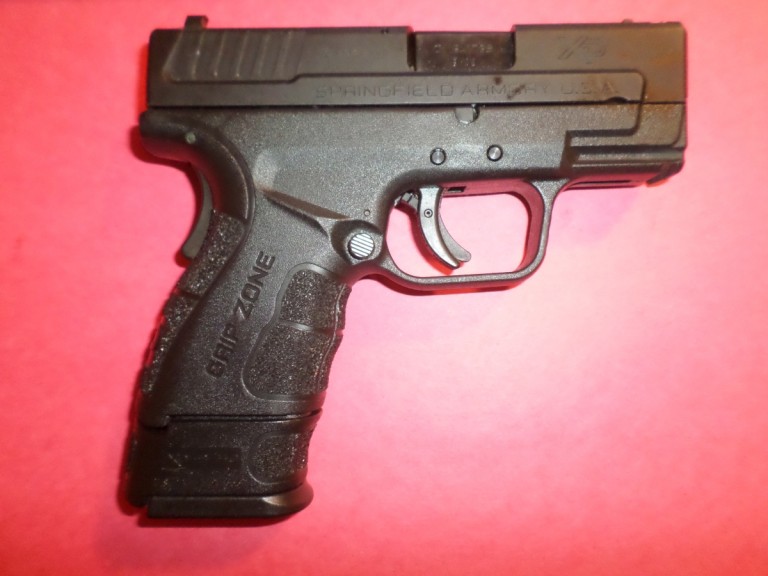 My Springfield Armory XD Mod.2 3-inch subcompact. There is a noticeable difference between the beavertail and grip in this gun and those in the Ruger LCP above. This larger grip area helps new students learn an effective grip and reduces the likelihood of injury. Photo: author

Adding Up the Negatives

Combining all these factors causes a bad experience with training. Giving someone a pistol that causes higher deviation makes them less successful or even slower than the person next to them, and they feel less secure in their abilities. Couple that with having a small gun that is harder to manage recoil or manipulate, and students can have a scary and frustrating experience. This leads the student to train less and fail to become proficient with their defensive tool.

I am in no way saying these are not quality firearms. They have their place and I simply feel that place is not for most beginning shooters. I also feel it is unfair to women that these firearms are directly marketed to them. I believe it discourages women from getting involved in shooting and more importantly being able to defend themselves by creating a bad introduction to firearms.

What Should a New Student Do?

My first recommendation is to take a class with a qualified instructor prior to purchasing your defensive pistol. These are not the only issues I see students come to class with after purchasing a gun prior to taking a class, but they are some of the most common. Research the instructor and look for writings from the instructor to be sure they are up to date on their information. You may even have a conversation with them prior to registering to ask their feelings on issues that are important to you.

Do some research prior to going to the gun store. You would most likely do this research if you were buying a new car or even a television. Don’t leave it to a salesman to educate you — that is not their job. Their job is to sell you a gun. If you come in saying you want a tiny gun you can fit in your purse, that is what they are going to sell you. As an instructor, I would have to educate you on the small gun and why I don’t think carrying in your purse is a good idea. We both have different roles, so don’t expect a gun salesman to educate you if you would not expect a car salesman to do the same.

If you do choose an ultra-compact .380, learn how to properly manipulate and grip the firearm, then practice these manipulations. Practice racking the slide and pay attention to where you place your hand. Practice drawing and gripping the pistol to be sure your hand is in the proper place so it will not interfere with the movement of the slide. Then train with your pistol to become proficient with a smaller gun and get the hits you need.

181 Responses to “Why I Don’t Like Ultra-Compact .380s”
STAY CONNECTED