The double-action handgun, whether revolver or autoloader, is a great threat management tool. The long, heavy trigger means that accidental discharges under stress are less likely to occur than with a light, short action.

What happens, though, when shooting has to be done? The trigger that requires deliberate action to fire also requires more attention to get good hits when shooting is needed. If that’s the case, what’s the best way to handle the double-action trigger in a self-defense situation?

Trigger Control Is Everything

Over the years, I’ve come to realize that it’s not about the sight picture. Everyone knows what a proper sight picture looks like, and it’s an easy thing to teach to even complete novices. What’s harder is to keep those sights—and the bore of the gun—on target as the round is ignited.

“Focus on the front sight” works not because we lack knowledge of the sight picture, but because the subtle visual cues in that view tell us when our trigger finger is steering the gun off of proper alignment. That allows us to re-establish that alignment on a continuous basis until the round ignites.

That’s great for target shooters, but as we start to focus on the threat, those visual cues disappear. We need to be able to shoot without our finger affecting the gun’s alignment, and it’s harder to do with a double action than a single action.

What To Do With That Finger?

In order to manipulate that heavy action, we need optimal finger placement on the trigger, and that is at the first joint, known in anatomy as the distal interphalangeal joint and usually abbreviated as DIP.

By centering that joint on the trigger face, we get maximum leverage with minimum effort. The finger doesn’t tire as quickly, and the finger movement is smoother. Using the DIP allows us to manipulate the trigger with as little imparted motion to the gun as possible.

Start With the Basics

When I talk about double-action trigger manipulation, I like to use the term stroke—as in a golf stroke. I use this term intentionally and in preference to other terms, because it puts the correct picture in the mind (you’ll see why later).

Once upon a time, double-action shooters were taught to stage the trigger—that is, to pull it back partway, stop, readjust the sights, then restart the trigger to fire the gun. We now realize that this is not practical in the midst of a defensive encounter, and that training in a manner that is not consistent with reality results in lowered performance.

Instead, we train so that the compression is of a consistent speed. Don’t stop or even slow down once the compression has started: keep the trigger finger moving until the gun fires.

Proper trigger control results in better double-action shooting at any speed or distance.

The goal of a good trigger return is to set us up for the next shot as efficiently as possible. The return should be as smooth as the stroke, and at the same speed as the stroke.

Once the trigger starts moving, it doesn’t stop. The compression/release sequence should not have any interruptions or slow spots. It should feel as though it is one continuous motion—just like a golf swing!

Finally, a Use for That Geometry You Learned in High School!

It’s important to understand that the double-action trigger and your finger are somewhat at odds. The trigger rotates on a pivot and travels not in a straight line, but in an arc. Your finger does the same thing: it pivots at the second finger joint and the tip travels in an arc.

Why is this significant? Because it sets the stage for the biggest mistake most people make when shooting double action: milking the trigger.

Grasping or “milking” the trigger brings the fingertip into contact with the frame, possibly throwing shots off target.

When this happens, the trigger finger steers the gun to one side. For a right-handed shooter, it usually results in the gun being pulled over to the right as the finger’s arc comes inward, toward the palm, as the sear releases. (This is why I don’t use the term “trigger pull.” The last thing we want to do is pull the gun more!)

Most people see this happening because their sight alignment suffers as the trigger finger steers the gun slightly off target. The usual reaction is to curl the finger so much that the tip contacts the frame, pushing the gun in the opposite direction. Consciously or not, the shooter is trying to equalize the two forces to keep the gun squarely on target.

Getting both of those forces just right on the target range, when you can clearly watch your sights, is easy. Doing it in the face of a determined attack, perhaps in sub-optimal light, is another matter.

The solution is to stop the trigger finger from steering the gun in the first place. How do we do that? Believe it or not, it’s pretty simple, but it takes a little conscious effort to retrain the brain.

The key is to let the trigger finger slide across the trigger face. Now that sounds simple enough, but it’s tough to do—at first. It gets easier after just a little dry-fire work.

You may feel as though your finger is going to slide right off the trigger, but it won’t! Compress the trigger, letting the finger slide down and across the trigger face. Pay attention to how it feels, and replicate that feeling with each repetition. 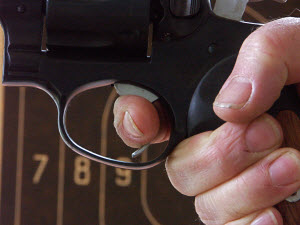 Letting the finger slide over the face of the trigger eliminates both “steering” and frame interference.

After you do this consciously a few times, you’ll discover that the tip of your finger is no longer curling in and touching the frame. You should also notice that your sights are staying locked in alignment on the target. This is because the trigger is now coming straight back and not being steered in any direction.

Do the same thing on the release stroke. Let the finger slide over the trigger as it smoothly resets. The return should be at the same speed as the compression. Watch your sights and do just enough repetition so that your sights don’t move during the return.

The result? Your sights shouldn’t move at all during the complete trigger stroke, either in compression or return. That’s when you know you’ve got it!

How much dry fire is necessary? Not a lot—most people pick this up in just a minute or two. Once you’ve gotten to the point that the trigger is moving without disturbing the sight alignment, any further dry fire is of little use. It’s time to go to the range and do it for real!

By letting the trigger finger move as it needs to over the trigger face, you’ll find that your double-action shooting will become faster and more accurate. Most importantly, it will be so whether you’re carefully watching your sights or not!

31 Responses to “Dealing With the Double-Action Trigger”