I did a very casual and unscientific review of gun sales in my local area. Gun-store operators told me that about 30 to 40% of the guns they sell for personal defense are revolvers, and the vast majority of these are small-frame pocket-type guns. If you carry a revolver for personal defense, you need to know some of the lessons we have learned in law enforcement over the years.

Law enforcement officers learned a lot about carrying revolvers before we switched en masse to semi-automatics in the 1980s. One of the first “secrets” we learned was that revolvers didn’t carry much ammunition. You may have noticed that yourself. I remember hearing officers say things like, “If you need more than six rounds, you are in big trouble.” That seemed fairly obvious, but I still wanted more ammunition.

We had five basic ways to carry reloads or additional ammunition:

These are still the primary ways to carry extra ammunition for a revolver. Most wheelgun shooters prefer speed loaders, and for good reason. Speed strips are also a good viable option for personal defense.

Having loose cartridges in a pocket is better than having no extra ammunition at all. The problem is that, when you pull out the cartridges, anything else in your pocket will be pulled out and mixed in with them. You will have to pick out and position the cartridges for reloading. This may be acceptable at the range, but is time consuming in a gunfight.

The dump pouch is a step up. It fits on a belt and holds the cartridges in a small pouch. It is easier to get to than rounds in your pocket, but the reloading process is still time-consuming. Think of it as a magazine pouch that you carry on your belt.

Speed strips hold the cartridges in a line together. The rounds are all oriented in the same direction. You shove two rounds off the strip into the cylinder at the same time. You repeat this until the gun is loaded. The speed strips also lie flat so they are easy to carry and conceal in a pocket, shirt, vest or box.

Speed loaders seemed like a technical revolution when they were first released. They are designed to fit specific revolvers. They hold the cartridges in the correct position to line up with the cylinder. Once the cartridges are started in the cylinder, the rounds are released through several different methods into the cylinder.

Moon clips are an example of the old becoming new again. Moon clips were originally used for .45-caliber military revolvers in the early 20th century. The thin metal clips are shaped like a half or full moon and hold cartridges in place to be dropped into the cylinder. The difference between a moon clip and a speed loader is that the moon clip is designed to be dropped into the cylinder and hold the cartridges in place while the gun is being fired.

Moon clips are an exceptionally fast method to reload. They also make unloading easier because all the cartridges are kicked out at once together. This eliminates the common problem of an empty case or two being difficult to remove while unloading.

Moon clips have one potentially fatal flaw. Being made of thin metal, they can bend easily. And once bent, they can make the revolver difficult or impossible to close up. Revolvers must also be designed specifically to use moon clips, and the majority of revolvers on the market are not.

Right about now, some of you may be asking, “Why do I need reloads? Statistics prove most gunfights involve less than six rounds.”

The classic book Street Survival: Tactics for Armed Encounters answers this question very well. It was originally written for law enforcement officers but applies to legally armed citizens as well.

“Based on statistics, it would seem that reloading is not an important part of gunfights. The average confrontation is over before either side fires even as many as three rounds, and only about four per cent of officers in shoot outs ever find it necessary to reload under fire; the closer the encounter, the less the chance that reloading will become a factor. For gamblers, these odds might be reassuring. But part of conditioning yourself for survival is learning to cope with the exceptional as well as the commonplace.”.

Let’s start with loading an empty revolver. Always visually and physically check the gun to ensure it is empty. Always keep your finger off the trigger until you’re ready to fire. Always keep the gun pointed in a safe direction. 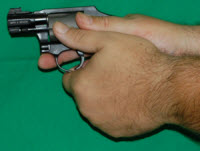 Step: 1 Grip the gun with your right hand in a two-handed grip.

Step: 2 Activate the cylinder release with your right thumb and keep it activated. The method will differ depending on the manufacturer. 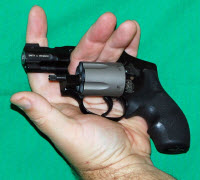 Step: 4 Continue to push your middle and ring fingers through the open gap under the top strap toward the cylinder. The gun should settle in the palm of your left hand. Position your left index finger over the barrel. Place your pinkie over the hammer or at the rear of a hammerless gun. Put your left thumb on top of the ejector rod.

Step: 5 Tilt the revolver down so that gravity holds the cartridges toward the cylinder. Get in the habit of keeping the gun up in your vision toward any potential targets. Line up the cartridges in the speed loader with the holes where the cartridges are seated. Insert and activate the speed loader. Different manufacturers have different release mechanisms. Practice using dummy ammunition or snap caps with the type that you carry.

Step: 6 Transfer the revolver to your right-hand grip. Remove your middle and ring fingers and close the cylinder with your left thumb.

The first four steps of unloading a revolver are the same used in loading the revolver. 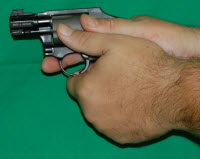 Step: 1 Grip the gun with your right hand in a two-handed grip.

Step: 2 Activate the cylinder release with your right thumb and keep it activated. The method will differ depending on the manufacturer.

Step: 4 Continue to push your middle and ring fingers through the open gap under the top strap toward the cylinder. The gun should settle in the palm of your left hand. Position your left index finger over the barrel. Place your pinkie over the hammer or at the rear of a hammerless gun. Put your left thumb on top of the ejector rod.

Step: 5 Tilt the revolver with the barrel pointed up. Use the palm of your right hand and push the ejector rod down rapidly. At the same time, use a slight downward motion to assist gravity in removing the fired cartridges. Visually confirm that all cases have been removed. Repeat this step if any cases are still in the cylinder. Occasionally a case will become form-fired to the cylinder and difficult to remove. If that happens, use your right hand to pick out the case.

Keep the gun high in your field of vision so that you can keep an eye on any potential targets while you are reloading. Reload the revolver using the steps listed above.

An emergency reload is loading the gun when all ammunition has been expended and you are still in a dynamic critical situation.

A tactical reload is used at a time of your choosing during a dynamic critical situation. This occurs if there is a lull in the action or a tactical “pause.” It may also occur when things seem to be winding down but you want to have a full ammunition load in case the situation fires up again. Ideally you reload when you want to reload, not when you need to reload. You want to use cover and concealment to your benefit in any tactical situation, so use them when reloading as well.

Techniques are available for left-handed reloading, reloading while wounded in the dominant arm, and keeping the gun in your strong hand while reloading. Space limitations prevent a full discussion of them. What I have presented is the best and most proven method for reloading a revolver. It is a good way, but not the only way. Choose what works safely and best for you and your abilities.

Safely practice these techniques with dummy ammunition. Find out what works for you and the equipment you carry. Be prepared for the exceptional as well as the commonplace.