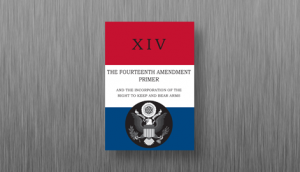 You should read this book.

The right to keep and bear arms has undergone a radical sea change since the 39th Congress enacted the Fourteenth Amendment in 1866. That landmark legislation provided that the right was individual — as opposed to the collective theory that had prevailed in many quarters during revolutionary times.

The gravitational pull of the Fourteenth Amendment has thus altered and reshaped the trajectory of the Bill of Rights. Between 1775 and 1866 the poster boy of arms morphed from the Concord minuteman to the Carolina freed slave. The motto of the original Second Amendment was that if arms are outlawed, only the central government would have arms. With the Fourteenth Amendment, a new vision, far closer to the unofficial motto of today’s National Rifle Association, was aborning: when guns were outlawed, only outlaws would have guns.

In this important book, Les Adams, author of the best-selling Second Amendment Primer, tells the story of the historical background, legislative debate, and ratification of the Fourteenth Amendment in a highly informative, accurate, and entertaining account. It’s a good, no, a “must” read for anyone who wishes to acquire an up-to-date understanding of our right to keep and bear arms. 114 pages.