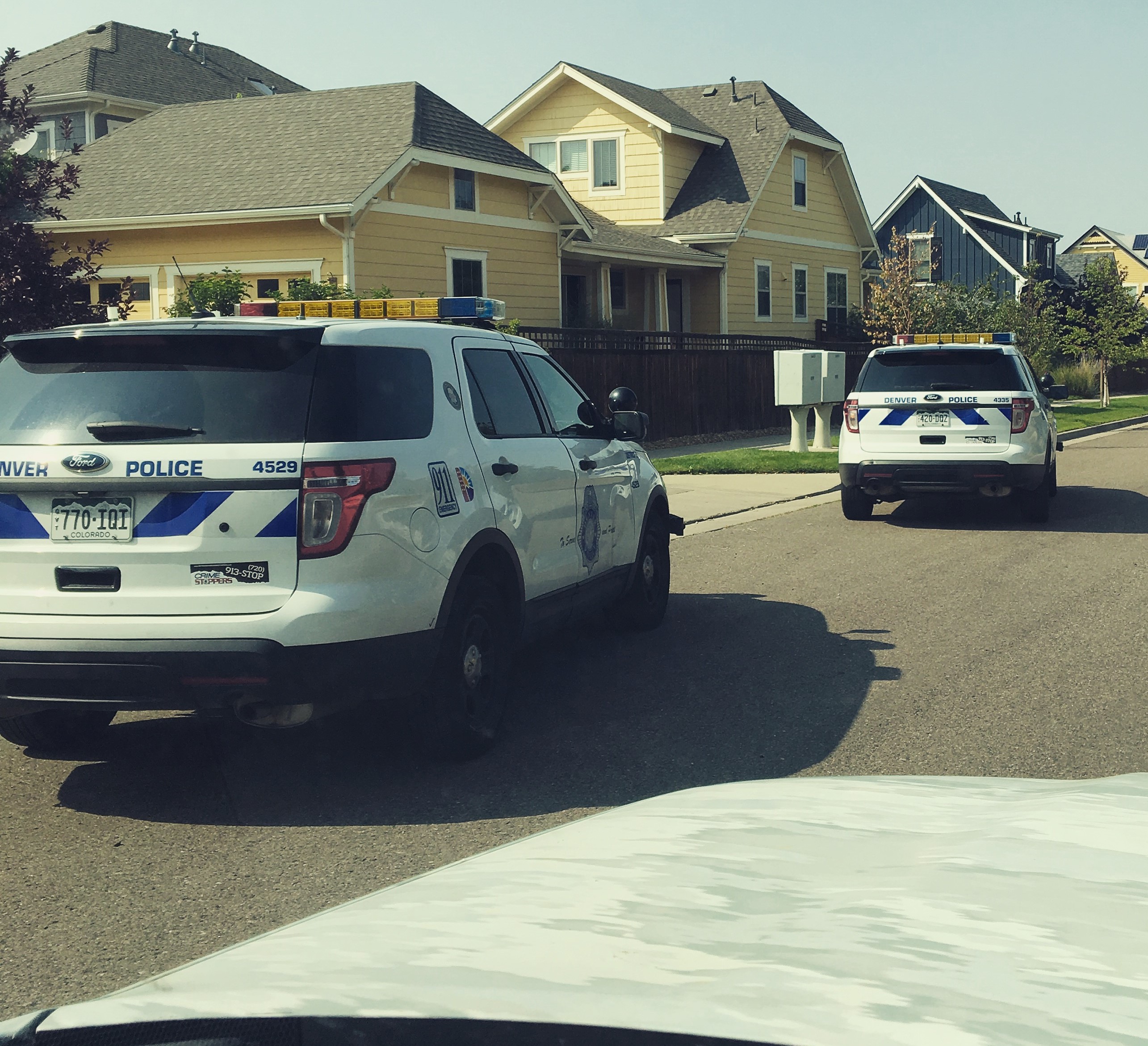 Letting law enforcement deal with violations of law whenever possible is a fundamental principle of conflict avoidance. Photo: author

Avoiding conflict should be everyone’s preference … but if you carry a gun, it also becomes your responsibility. Readers familiar with Personal Defense Network should be familiar with my thoughts on the idea of “should vs could” when it comes to taking action with a defensive firearm. A myriad of laws and beliefs on this topic exist around the U.S. Most of them revolve around people asking what they “can” do in regard to the letter of the law, questions like, “When can I shoot someone?” or “When am I allowed to use my gun?” Answers often include phrases such as “stand your ground,” “castle doctrine,” or “duty to retreat.”

If you speak with someone educated on the concept of self-defense law, you may hear about case law, legal precedent, grand juries, district attorneys, and evidence of a crime. Regularly, those with training will talk about the holy trinity: motive, opportunity, and means. Did the person want to hurt you? Did they have the opportunity to hurt you? Did they have the means by which to hurt you? Texas, Massachusetts, the Tueller Drill, the number of people one might prefer to be judged by (as opposed to the number they’d be carried by), how many tales a dead man tells, and God sorting it out might also come up, though not helpfully … ever.

When I think about the government giving me “permission” to shoot someone, my almost immediate follow-up thought is, “I don’t really care about that.” I should now say the following: I am not a lawyer and this article should not be considered legal advice.

AND NOW, A STORY

My wife owns a house that has been vacant for a couple of months … and we had armed intruders inside it about a week ago. Long story short, it was supposed to have changed hands back in July, a couple of weeks after a friend of hers moved out. That got delayed a month, and then another month. We spent most of August traveling, and some would-be squatters moved in. Thankfully, she noticed them on the porch. She could very easily have walked in on them, but they happened to be outside. She brought them to my attention and, as instantly as Warrior Expert Theory allows, I made a decision: “Call the police.”

Now, I’m here with a fair amount of training and a decent amount of confidence in my ability. I’m legally carrying a gun with over 14 rounds of quality ammunition, and a spare magazine of 16 is within reach. There’s an AR locked in a vault and a vest with front plate installed next to it. My truck is covered in logos from firearms industry companies and it’s wrapped in A-TACS camouflage. Unauthorized people are inside a home owned by my wife … by extension, my property. They are also of a different race than I am. According to the Anti-Gunners, I should have rolled out, kitted up, and made entry, right? Bonus, I would’ve been well within my legal rights to do so at the time. Where would they ever get that idea? Well, the truth is that if you pay attention to any firearms forum or social media chatter, it won’t take you long to get the same idea. Honestly, it’s a reasonable conclusion for Anti-Gunners to push and for those ignorant on the subject without much invested in the “gun debate” to believe. Still, I chose to avoid conflict.

Four patrol vehicles with five officers showed up over the next five to 10 minutes. The first two approached the home, made contact with the intruders, asked them a few questions, found out warrants were out on them, and heard inconsistent stories about their right to be in the home. Within 15 minutes of the initial call, two people were in custody and being driven away from the property in separate cars. No violence whatsoever and no immediate danger for me or anyone in my family. This is the best possible outcome I could think of, beyond some kind of really awkward, and highly unlikely, misunderstanding between us and our former tenant or the future owner.

Why would anyone even consider approaching the home or engaging the unauthorized occupiers, given the circumstances as they were? Our kids were all accounted for and we didn’t know anyone who was supposed to be in the home. As far as we knew, the people didn’t know us, see us, or know that we were connected with the house as we drove by. There was no reason to believe there was an immediate threat to us or anyone else. And, not that it should matter, but very little of value to us was in the home. There was, to my mind, no objectively compelling reason to put myself at risk to find out what was going on firsthand. 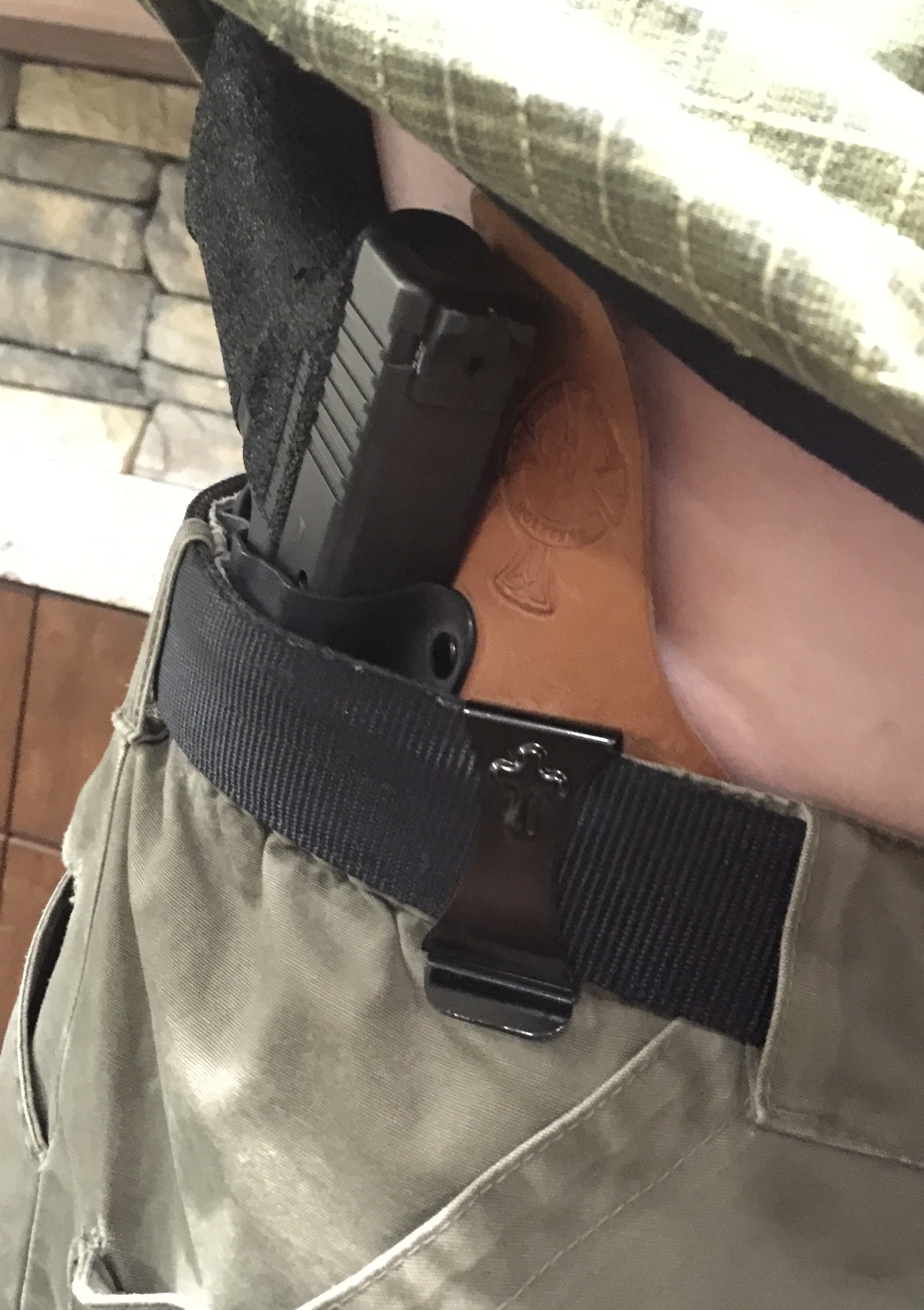 It’s almost always better to keep your defensive gun in your holster, if you can. Photo: author

PRACTICING WHAT I PREACH

This example, my most recent opportunity to “practice what I preach” in any significant way, epitomizes the most important reason I talk so much about the “should vs could” issue. In the moment, the law isn’t really the issue. The driving factor is far more likely to be your perception of the need to act, heavily influenced by your prior training and thoughts on the topic of when you should use defensive force. This certainly isn’t to say that knowing and following the law aren’t important. Of course, they are … but when it comes to actual defensive moments, they play a much greater role in what leads up to the emergency than they do during it.

The law and the advice of your lawyer are your guides to behavior in all aspects of owning guns, storing guns, carrying guns, defensive firearms training, your strategy, and your tactics leading up to the event. Don’t own, store, or carry guns illegally. Don’t train to shoot under circumstances that you know to be illegal. Don’t plan to utilize a strategy or build your plan around tactics you believe to be in violation of law. If you live in a place that gives you a legal “duty to retreat,” don’t set up a home-defense plan that involves giving yourself a minor leg wound so you can stay put and use your gun to shoot the bad guy when running out the back door and avoiding conflict would be options (Ridiculous, right? But I’ve heard at least two people suggest it.).

Set up a plan and live a life that is within the rules as you understand them. That’s how reasonable people behave in a civilized society ruled by law. If you don’t like the laws, work to have them changed. My advice to people making armed home defense plans absolutely involves escape from a perceived lethal threat, if you can do so without knowingly putting yourself (or your family) in greater danger. Be as many corners and/or doors away from where you think the bad guy is as possible, and leave if you can.

Castle doctrine may say you don’t need to move one inch away from the attacker if they enter your property and present a threat, but that doesn’t mean you can’t if it makes more sense. Sitting here reading this, you (hopefully) think that sounds smart and logical and build that way of thinking into your plan. Or you may think you’ll wait until the moment occurs and mentally create some kind of Venn Diagram in your head with circles for every law, rule, guideline, advice you’ve heard, and a few choice clichés from your favorite internet forum, and then come to the best tactical decision you can so you prevail. In the event you shoot someone, this means justice has been served, good has triumphed, evil has been punished, and the pro-gun population has one more tick on the statistic sheet for successful defensive gun use.

But in the moment when you have to make a decision, you should make it to keep yourself and those you care about as safe as possible, given your understanding of the circumstances. Those circumstances include the laws governing the use of force wherever you happen to be at the moment, but you shouldn’t believe they will be the top priority in the most emergent moments. If you believe you need to defend yourself, you should. If you don’t perceive that need at that moment, you shouldn’t.

For me, it really is that simple. I’m not going to go charging into potential harm’s way to defend a vacant home and an old piano (or any other property). I’m not going to exercise my right to enter a home I know to have potential threats just because I have been offended morally. I’m not going to become a vigilante and seek justice for any laws I believe are being broken. I’m not even going to invoke a “citizen’s arrest” and try to keep people from escaping a police response if I don’t believe that escape would put others I care about in immediate harm.

KEEPING IT ALL IN CONTEXT

As a personal defense educator, it would be disingenuous if my advice to others didn’t show up in my own behavior when it was contextually appropriate. The reverse is also true: The advice I give should be similar to what I would imagine myself wanting to do under similar circumstances, including having similar gear and level of training as the student in question. An appropriate guideline in the moment could be expressed as a teacher’s version of the Reasonable Man Doctrine:

What would I advise a similarly trained and equipped person, knowing what I know right now of the circumstances, to do in this situation?

This question should answer the question of what to plan to do for everyone, really. Take your ego out of it. Take away any bias you might have about how you are a special case. Plan ahead of time and train realistically (including visualization) so you have a higher probability of executing the plan you made in a sober moment when the emotions are high and adrenaline is flowing.

Don’t think for a second there weren’t anger and anxiousness last week when I realized we had intruders and my family could have been in danger or our property at risk. There were, but my training kicked in without any regard whatsoever for the relevant laws at that moment or my feelings about the situation. Too many people find ways to rationalize poor decisions. Putting yourself at risk when you don’t need to usually falls into that category. Only being willing to sacrifice yourself for someone you care about, obligation incurred by duty you agreed to take on, and a very few other factors trump this most basic personal defense principle: Avoid putting yourself in more danger when you can. When you choose to carry a gun, you have an even greater responsibility to think about any way you can avoid conflict that might lead to your needing to use it.

In the future, when you think about the use of lethal force, don’t just think about whether someone else says you can use lethal force. Think about whether or not you really should. Plan for a successful defensive brain use that is a positive tick mark for the entire pro-human population. And if you are as worried about convincing more citizens who vote that responsible gun ownership makes the world safer, consider how you talk about these issues in public as well.

Thanks to the responding officers of the Denver Police Department for taking care of the situation quickly, efficiently, and professionally.

60 Responses to “Conflict Avoidance: Practicing What I Preach”