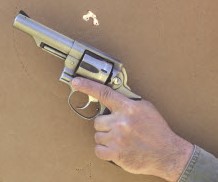 HOW I LEARNED TO LOVE THE WHEELGUN

I’m sure you’ve heard it before: someone asks, “Which is better: revolver or autoloader?” Everyone chimes in that revolvers are more reliable and simpler to operate. Over and over again. Yadda yadda yadda.

Those things are generally true, but there are some less obvious and perhaps even more compelling advantages to selecting a revolver as your concealed handgun for personal defense. They include:

Intrigued? Read on for the details of these factors that you may not have considered, and perhaps not even known, about “those old-fashioned things at the back of the showcase.”

Let’s start with the learning curve. Yes, a revolver is simple to operate, in the sense that there are no controls that must be manipulated in order to fire it. What’s not obvious is the advantage in training to operate the gun to its maximum efficiency.

If you’re shooting an autoloader, it’s in your best interest to practice malfunction drills on a regular basis. Learning to identify and clear the most common jams takes time, both in initial training and regular practice. That’s time you’re not spending learning to actually deal with the dynamics of a critical incident, which is what’s going to keep you safe.

Training in malfunction clearing with a self defense revolver is nearly non-existent. There’s really only one common jam that will tie up a revolver, the dreaded case under extractor, and it is completely preventable by learning proper reloading technique, which you need to learn anyhow. Any of the uncommon malfunctions can be prevented through normal maintenance and using quality ammunition.

The failure to fire remedy? Pull the trigger again. No need to spend valuable training time (and money) learning some tap-rack-bang-do-the-hokey-pokey routine just to keep your gun running. That means less time monkeying with the gun and more time shooting.

Speaking of training, one of the overlooked features of the revolver is that it operates without ammunition. This means that dry firing is actually useful! Instead of interrupting your train of thought to rack a slide and reset a hammer, you can concentrate on performing a complete trigger sequence. Because the brain is able to perceive a complete cycle of events, a short dry-fire session is all that’s needed to implant proper trigger control technique in the mind.

Many people will tell you that a self defense revolver is hard to carry concealed. The cylinder, they say, is darn near impossible to hide. I’ve found that it’s just the opposite: the revolver is actually easier to conceal, despite the cylinder!

With an auto, the part that sticks out is the squared-off butt of the frame. No matter how thin the gun is, you still have that bottom corner poking through your cover garment. It’s hard to hide because it’s not organic; we don’t normally see right angles protruding from beneath clothing.

The grip of the revolver, on the other hand, is rounded. It doesn’t protrude as far because it’s typically shorter, and the smooth profile doesn’t catch clothing and scream “GUN!” The cylinder, likewise, is a round shape that easily disappears under clothing.

If you have kids, try this experiment: put on a dress shirt and grab some of your children’s Legos. Stand in front of a mirror and put a couple of Legos in your shirt pocket. Notice how the square edges stand out? Now go get a couple of marbles (or perhaps some jelly beans) and replace the Legos with them. Notice how those round shapes are less obvious, and even harder to identify? Same principle.

If you keep the gun on a nightstand, in a drawer, on the floor under your bed, or on any flat surface, you’ll find the revolver is easier to pick up. The cylinder holds the grip up and away from the supporting surface, making your grasp faster and less fumble-prone.

The same is true for a revolver carried on your person. The cylinder provides a slight amount of clearance from the body, making it easier to get a good combat grip. Again, less fumbling and surer draws are the results.

Since the grip isn’t filled with heavy ammunition, it won’t be constantly trying to move in gravity’s direction. Revolvers carried in concealment tend not to shift around as much as autos, keeping their grips in the same place all the time. When you are faced with employing your gun during an emergency, that kind of consistency is important.

Revolvers are economically more efficient, too. I’m not talking about initial cost, though a revolver does tend to be less expensive than an auto of equal quality. It’s all the other stuff that comes into play.

First, you don’t have the expense of magazines. If you’re serious about your defensive hardware, you should have five or six magazines on hand to fit any autoloader. Magazines do wear, they can be damaged (especially if you practice realistically), and therefore they need to be replaced occasionally. At today’s prices, that can add a couple hundred dollars to the initial cost of the gun, not to mention the cost of replacement. These are expenses that a revolver just doesn’t have.

Most authorities recommend extensively testing an autoloader with the quality defensive ammunition you intend to carry. While specifics vary, a commonly cited figure is 200 rounds to verify function and reliability. With ammo prices what they are, you could nearly buy a new gun with that money!

With a revolver, you’re primarily testing for point of aim—to adjust the sights or to verify that the bullet impact matches non-adjustable sights. A couple of cylinders will do it, and you can go back to shooting cheaper practice ammo. That’s a huge savings!

During an actual encounter, you’ll find that the revolver has some definite tactical advantages as well. A revolver isn’t dependent on having just the right grip in order to run, and “limp wristing” malfunctions simply don’t exist. This means that shooting from awkward positions or while injured won’t result in a jammed gun, as can happen with an autoloader. Strong side or weak side, pulling the trigger will fire the revolver every time.

In close-quarters fights, the revolver is more resistant to induced failures. While both autos and revolvers can be deliberately rendered inoperable by a very determined assailant, the revolver won’t be sidelined by inadvertent occurrences: clothing that fouls the slide, ejected casings that get knocked back into the ejection port, or slight contact that slows the slide enough to induce a malfunction. The shrouded or concealed hammer revolvers in particular are about as immune to induced malfunctions as can be imagined.

When all is said and done, the revolver remains the quintessential personal defensive tool. It’s best in one-on-one fights in close quarters, where its strength as a reactive device can best be utilized. I’d never suggest that it’s the right tool for a SWAT callout serving a warrant on a drug house, or a SEAL team taking out a hive of Tangos. Those are proactive fights that call on the strengths of the autoloading sidearm.

But you and I live in a different world. While it’s fun to play Walter Mitty and imagine ourselves defeating an entire street gang singlehandedly, the reality is that one-on-one violent crime is still the most common type encountered by legally armed citizens. In that reality, the revolver’s unappreciated advantages make it a viable choice for self-defense

57 Responses to “The Revolver: Unappreciated Advantages”