As I said in the first installment, these defensive shooting terms and concepts are roughly grouped so that like things are treated together. In this episode, let’s look at concepts about the shooting part of defensive or tactical shooting — those things that involve and affect actually delivering a bullet to the target.

You are reading the second installment of a series of blog posts! Read part 1 and part 3 here!

Let’s start with a discussion on accuracy. Many people use the terms “precision” and “accuracy” interchangeably, but they’re not the same. Knowing the difference and how each contributes to success (or failure) in defensive shooting is critical to your skill development.

Precision is the degree of carefulness to which you shoot, which in turn depends on what you need to hit. The area of precision can be practically defined as that where each hit is equal (or approximately so) in value or effect to every other hit. The smaller that area, the more carefully you need to shoot in order to make those hits. The area of precision determines how much skill you need to use, which means that the target dictates the precision to which you need to shoot. Precision is a variable because each different target has a larger or smaller area in which each shot is equal to the next, and your job as a shooter is to recognize that area (which is the level of precision) and apply the amount of carefulness (skill) in order to put your bullets into that area.

Accuracy: Accuracy means that the bullet went where you, the shooter, intended it to go. When considering the target, accuracy refers to whether or not your shots landed within the area of precision that the target required. Accuracy is therefore a digital (yes or no) condition; you either hit within the area of precision the target dictated, or you didn’t. The degree to which you missed can sometimes be a diagnostic aid, but in absolute terms you either are, or are not, accurate; there is no such thing as shooting “more accurately” or “less accurately”, only to greater or lesser degrees of precision. Your goal as a defensive shooter always has to be accurate hits inside the area of precision that the target has dictated; shots that miss are inefficient, because even though they might contribute to your attacker’s incapacitation they use up time and ammunition which would have been better utilized making an accurate shot.

Do you understand the difference between “accuracy” and “precision”?

Balance of Speed and Precision: This is a concept that goes back a long way in shooting history, but only recently has it come to the fore of the shooting world to be thoroughly explored and codified. If you’ve been shooting any length of time, you know intuitively that if you have a more “difficult” target (one which requires more carefulness from you — a smaller area or a longer distance, for instance) you slow down as you apply more control (skill) to making the shot. That is the essence of the Balance of Speed and Precision: applying more skill to shoot to a higher level of precision takes time (and effort.) Defensive tactical shooting is always a balance of speed and precision; you’re always looking to shoot as quickly as you can for any given level of precision required, with the goal being 100% accuracy. Every shooting situation you encounter will have a different balance of speed and precision, and a large function of your training and practice needs to be developing your ability to recognize what the proper balance is in any situation. Shoot too quickly and your accuracy suffers; shoot too slowly and you waste time that could have been better spent delivering more rounds to the threat. Learning the proper balance is key to defending yourself efficiently.

Actually getting shots on target involves aligning the gun properly and keeping it aligned until the bullet has left the bore of the gun. There are several mechanical concepts which apply, but not all are equal — and the most important one isn’t what most people think it is.

Sight Alignment: Sight alignment refers to taking the care to make sure that the front and rear blades are in their proper position relative to each other. With typical pistols sights, for instance, sight alignment means that the front sight is placed in the rear notch so that the tops of the sights are even and there is an equal amount of open space on either side of the front blade. In technical terms, sight alignment is referred to as superposition (from the root ‘superpose’.) Note that optical sights, such as scopes and red dots, do not employ the concept of sight alignment. This is one of the two most common sources of alignment errors on target; the other is in sight picture. For another take on this topic, you can review this PDN Video.

Sight Picture: Sight picture refers to the proper placement of the aligned sights (or the optical reticle) on the target; this is technically known as superimposition. This is the second source of alignment error on the target (the first being sight alignment.) The reason most people shoot better with red dots and other optical sights is because the error of sight alignment is removed, leaving only the potential error with the sight picture.

It’s worth noting that, from a conceptual standpoint, you use your sights whenever you need to shoot to a greater level of precision than you can without them. Efficient defensive shooting sight use isn’t whenever you “can” — it’s whenever you NEED to. 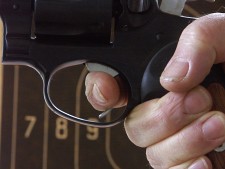 Trigger Control in the context of Defensive Shooting might not be what you think it is.

Trigger Control: manipulating the trigger to fire a round without disturbing the gun in the process. A lot of people find this difficult to accept, but sight alignment and sight picture errors aren’t usually the source of accuracy problems; trigger control is. Even if you’re not using your sights — simply mechanically indexed on target — poor trigger control will cause the shots to be inaccurate, often to an amazing degree. Manipulating the trigger without moving the gun starts with a solid grasp to avoid the gun moving in the hand or the remaining fingers contracting in sympathy with the trigger finger. Pressing the trigger straight back, seemingly directly into the palm of the hand, is also critical to good trigger control. If the trigger is pushed to one side, or pulled to the other, the gun will move enough to throw the shot off. Trigger control is also influenced by the fit of the gun to the hand; if the gun is much too large or much too small for the shooter, trigger control becomes much more difficult. This is one of the reasons why proper gun fit is more than just “what feels good to you”!

Finally, let’s look at a defensive shooting concept that many people will argue about and obsess over without really understanding.

Shooting stance: A defensive shooting stance is a particular combination of upper and lower body (feet, primarily) positioning. The environment and circumstances in which you shoot will largely dictate your lower body positioning; the ground and items on it affects where your feet can be, and sometimes that may not be where you’ve practiced or what your “ideal” stance is. In training and practice, adopting a neutral stance — where the feet are roughly parallel to the target and about shoulder-width apart, which is what the body tends to do naturally when surprised by a threat — makes it easier to adapt to an improvised position if that’s what circumstances force you to do. It isn’t nearly as easy to adapt to circumstances if your training has used an off-center or off-balance foot position and you’re forced into a position that is completely opposite. Such lopsided stances are usually taught from a misguided attempt to gain a perceived mechanical advantage. 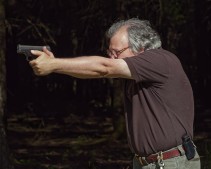 The upper body portion of the stance is dictated by your body’s normal, natural threat reactions. Both scientific and empirical evidence suggest that our natural inclination is to square off to the threat, with our torsos parallel to the attacker, and to put whatever tool we use on our centerline and extend to arm’s length. Our visual systems as well are keyed to that type of response to be able to align the tool on target as efficiently as possible. The so-called “Isosceles” stance in its traditional form — with both arms thrust out and as straight as possible, elbows preferably locked and shoulders rolled forward — is the closest to our body’s natural reactions. If you remember the discussion about “intuitive” from the first part of this series, this stance is intuitive because it works in concert with the way our body wants to react to a threat.

Other stances, where the body is bladed or the arms bent in some fashion, are non-intuitive because they don’t match what our bodies want to do naturally. It’s difficult to find any empirical evidence that training can override this natural reaction when someone is truly surprised and in fear of their life.

In the next installment, we’ll look at those things that describe or develop your ability to perceive or respond to the presence of an immediate and lethal threat.