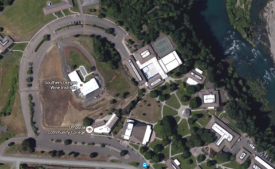 The Umpqua Community College Campus in Oregon… site of a Spree Killing Event.

As the news is breaking about a spree killer event in Oregon on a College Campus, We know that many people will be asking questions about exactly what happened and why. Of course, it is far too early to try to be accurate about any of that. Hopefully, time will answer those questions for us.

Meanwhile, here at Personal Defense Network, we specialize in giving people answers to questions related to active shooter training that are going to be just as common and, for those of us not involved directly in today’s tragedy, potentially much more important: “What can I do to prepare for, and deal with possibly getting caught in, a Spree Killing Event?

Responding to so-called “active shooters” is something that we’ve been talking about for along time here at PDN. Until our society comes up with a way to stop violence (…which I’m not holding out for), this information is a necessary good. It is good that people take responsibility for protecting themselves and others. It is good that we have a team of experts in various fields thinking about the problem. It is good that we have PDN has a method of communicating this information to the people who need it.. including You.

Please learn what you can from the resources below… and SHARE them with those you care about as well as those you see asking questions about about what to do during a Spree Killing. You can learn more about the developing story in Oregon HERE. -RJP

In the political discussions that always follow spree killings, “gun free zones” (GFZ) are always talked about. In today’s case, I have already seen it mentioned many times, though it still isn’t even clear if the college campus in question was actually a GFZ. PDN Contributor Grant Cunningham, an Oregon resident, had this to say just hours after the event took place:

“CCW is allowed on all school campuses in Oregon, HOWEVER the school itself may have an anti-CCW agreement in their student application – in short, the student “voluntarily” gives up his/her right to carry in order to attend classes. Their site has been down since this happened so I can’t research that. The courts have also said that public colleges cannot prohibit CCW on their grounds, but that they can regulate CCW in certain buildings. I believe that ruling is under appeal because it appears to violate the state’s very strong preemption law.Last time I was at that campus they had “No weapons” signs on the buildings.”

Regardless, here is some important information that you can use to be safer in a GFZ:

VIDEO Picking up a Dropped Gun: Regardless of whether or not you generally carry a firearm, if the opportunity to pick up a dropped gun presents itself during a spree killing, it might be your best chance to end the violence. The video covers the concepts involved. 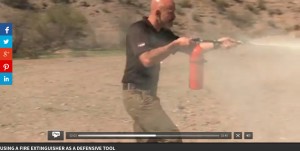 VIDEO Dealing with an Spree Killer when Unarmed: Improvised Defensive Tools are all around you everyday. Thinking about how you can use them ahead of time can save you precise seconds if you are forced to take action quickly. This video clip is an excerpt from the PDN DVD on Active Shooter Response.

VIDEO Disarming or Disabling a Spree Killer: While it certainly isn’t the preferred scenario, being unarmed against a murderous gunman doesn’t mean you are helpless. In this video, concepts related to dealing with an attacker with a long gun are covered.

Preparing our Children to Fight Back during Events at Schools

This is a very sensitive topic, of course, but we at PDN feel it is incredibly important to teach our kids to do more than just Hide & Hope while waiting for armed professionals to come save them in the event of an attack at their schools. The videos below are appropriate for both children and parents looking for alternatives to the traditional Lockdown Responses.
VIDEO Preparing your Kids to Respond: Lt. Col. Dave Grossman and I discuss proactive strategies for school defense in case of a school shooting. The School Attacker Response Course teaches kids that their first duty is to evade, then barricade, then respond if the first two don’t work. As Lt. Col. Grossman says, “If you don’t teach kids to do something, you’re teaching them to do nothing.”

VIDEO Books as a shield against Bullets: Demonstration of how text books can stop typical bullets that may be fired at children trapped in a School Attack Situation. A backpack filled with text books can be used as improvised “body armor” during such an Active Shooter Attack.

ARTICLE Talking to Kids about Spree Killings: This article was written in the hours after the tragic killings at the Sandy Hook Elementary school many years ago, but the advice offered still stands up today. No doubt many family discussions about these types of events will take place over the next few days. 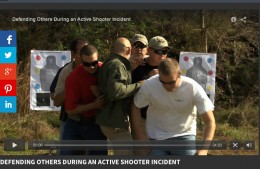 Responding to a Spree Killing when Armed

If you carry a gun in the public space, dealing with a Spree Killing event in a crowd with any number of family members in tow is one of the worst case scenarios you could possibly imagine dealing with. While these resources are not replacement for firearms training, skill development practice and good scenario evolutions, they may help you prepare for that moment that no one can completely rule out:

VIDEO Defending Others during an Active Shooter Event: During an active shooter incident, you may need to move against a fleeing crowd in order to reach a family member on the other side. After some discussion of what not to do, a drill is run that shows one way to push through a crowd.

ARTICLE Armed Citizen Response in Public Environments: The priority of life protocol for the armed civilian is monolithic. The only concern should be self-defense. Included in that is the defense of your significant others in your immediate vicinity. While law enforcement is sometimes tasked with going on the offense – moving toward the threat – the armed civilian should (in most cases) be moving out of harm’s way and using deadly force only when necessary for personal defense. This task may prove difficult in public because panicked crowds tend to exhibit “herd” behavior.

VIDEO Responding to an Active Shooter in a Crowd: Thinking about shooting angles and backstops is always important, but it becomes even more so when you are dealing with a crowd.

Also, within the last hours, PDN Contributor Paul Carlson of Safety Solutions Academy  scrapped his plan to talk exclusively about emergency medicine and invited me to join his other two guests to talk about some of the things that people are obviously interested in during the media frenzies that follow tragic events like the one that struck the Umpqua Community College Campus today.

Unlike armed professionals, most citizens do not have the opportunity for formal Active Shooter Training. We discussed the importance of having a plan before getting caught in an event, the importance of medical equipment and knowledge and the potential need to improvised defensive tools. We also touched on some of the non-gun gear that you might want to think about having with you to deal with getting caught in a public spree killing and the tenets of the School Attacker Response Course. You can check out the complete VIDEO HERE.

As always, more info on this topic is available at www.personaldefensenetwork.com.