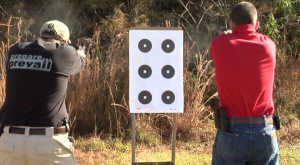 In the World we live in, being prepared for the unexpected violent encounter is a must-have mind-set. Knowing how to react could save your life – and the lives of many others. Personal Defense Network has compiled this one-of-a-kind video set, with 8 DVDs covering critical topics related to an active shooter scenario. This is a collection you should own. See the specific topics covered in each video below. 535 minutes.

Chapters:
Evolution of Proactive Strategies
Evade
Barricade
Respond
Training to respond to a Spree Attack
Demystifying the Gun
Using a Fire Extinguisher as a Defensive Tool

Shooting in Defense of Others – 69 minutes